Calling the Shots – Custom Previs for Writers and Directors

Calling the Shots – Custom Previs for Writers and Directors

Clara Chong is a film director and writer at Main Course Films in Sydney. Her experience began over 20 years ago, directing national television commercials for clients and developing specialities in food, dance and lifestyle. Today, she has a number of diverse films in development – one concerning social issues, a science fiction adventure, a thriller and others – but her focus is always on creating memorable characters and forging an emotional connection with her audience. As a director and as a writer, she relies on her technical filmmaking skills and on her ability to communicate with everyone working on her productions.

Similar to most independent filmmakers, she feels the push for speed and cost efficiency. For Clara, previsualisation has become a very individual, customisable, critical stage of production, keeping budgets leaner, making shooting and post times shorter and reducing the overall footprint of a commercial, film or documentary.

From the Ground Up

Her technique, outlined here, shows how far a director can take a project in terms of planning and collaboration. The process starts in her own office before finalising the script, commencing development, pre-production, going on set or even hiring any actors. Nevertheless, it is highly detailed and moves the production past many key decisions, putting her in full control of her own project. 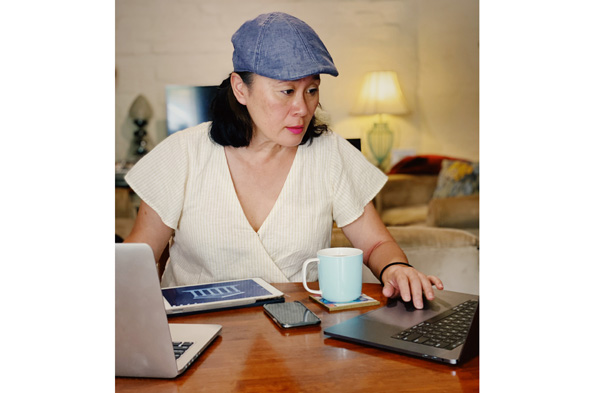 On one laptop, Clara runs Final Draft script writing software with a work in progress version of her script, before she has finalised the timing, pacing and placing of the story beats.

On second laptop, she runs Final Cut Pro X and, in effect, starts the edit even before the shoot by using FCP’s Placeholder storyboard generator to block out the scene she is working on, or the whole story,  The generator displays generic greyscale images of people and locations. She can use it to show how many people she envisions in a shot and the gender, the style – wide, long, medium, close-up etc – type of environment such as inner city, suburban or rural, different skies, interior or exterior – with or without notes.

The result is a set of very basic boards she can then place on the FCP timeline, immediately giving her documentation she can send the camera operator, crew, actors, wardrobe and other members of the production.

Meanwhile, Clara is continuously collecting reference images of objects, people and places on her iPhone. She can group these together into digital mood boards, upload them to Instagram and share them.

While her work in FCP X is useful to understand the flow of a scene and to start communicating what she wants to see in particular shots, her storyboarding becomes much more refined and detailed in Procreate, drawing and painting software used with a stylus on an iPad Pro. In this application she starts pulling information from the images she has been collecting. 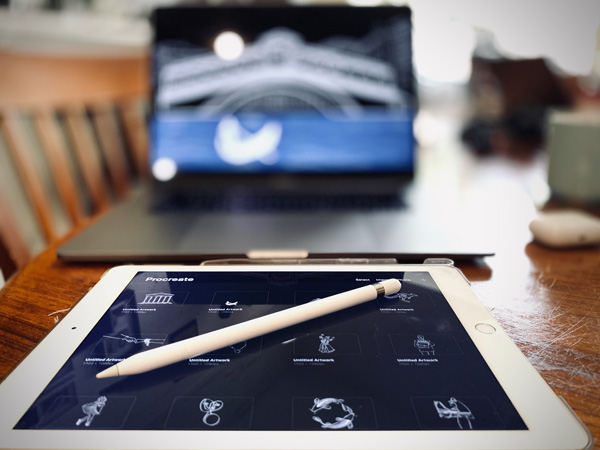 This means that instead of stopping at simply sharing her mood boards with references in an as-found state, she pulls out any of their elements – elements, lines, colours, textures and so on – to build her own detailed storyboards that show her ideas and preferences in context.

Based on a layer system like Photoshop, Procreate’s primary tools are brushes in many styles, colours and textures. With those she traces over parts of a reference image – a character, the background layout, a building, designs for set pieces, looks and poses for characters – and saves out elements as layers as she goes. She can texture and colour the sky, for example, and save out both the colour and the texture as separate layers.

Procreate is actually quite fast and allows her to work pretty much in real time. Its Valkurie graphics engine accesses the architecture of Apple Metal, the API for iPad’s GPU, to optimise the iPad performance. Painting speed is supported by Apple ProMotion adaptive refresh rate, which scales between 60 and 120fps depending on demand.

The layers become interchangeable parts, used in one or more shots. “Keeping everything – each character, landscape element, prop and so on – on separate layers means I can move each element around my frame to exactly where I want to block the action,” said Clara. “To keep increasing your playable layers, you can also merge them. If I need to, I export a layer to Photoshop for more development and re-import it into Procreate. I formerly used Photoshop for some of what I do now with this customised system, but I find ProCreate is more versatile and immediate.”

Procreate layers allow useful options for crowds as well. She draws an initial small group of people or elements on one layer, then duplicate them several times on separate layers before merging down and duplicating again. Clara said, “This process is very time efficient and I can manipulate exactly where I want the crowd to be, and re-frame or regrow it to match the perspective I want.”

Meanwhile because she is always working on connected devices, she can communicate with her colleagues at any point directly with email or through a social media connection like Instagram, as mentioned.  What’s also important is that at any point, she can return to the script or the edit and update the project. 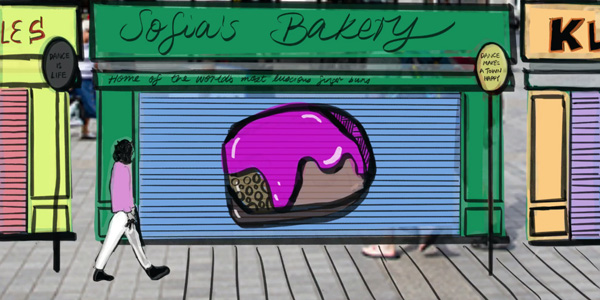 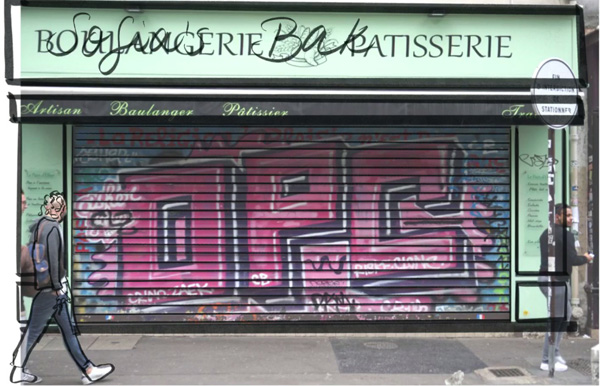 While still in black-and-white, the boards help make decisions about cameras, lenses, equipment and locations, but adding colour to the boards brings some other advantages, such as making decisions about look of the set design including props, wardrobe, hair and makeup. “If I continue to use separate layers for every new element I draw into frame, I can change my mind about a colour in a location or wardrobe without having to redo the entire board. In other words, you’re literally painting in your project colour palette as you storyboard,” said Clara.

Her approach to storyboards is a subtle way to communicate certain preferences to members of the production without explicitly writing them into the script. A common example is diversity of talent. She said, “If I want the cast to include lots of different ethnic, age and physical types, it can actually be a struggle to make sure that it happens. But when I show it on the boards it’s amazing how often it gets picked up for shoot.”

On a simpler level, a standard mood board can leave a DP guessing about why a particular reference image is included. A picture of a man in a blue coat might have been chosen because of the coat, its colour, or the way he is standing. Selecting out the elements that attracted her and putting them into a storyboard answers the question.

While defining real worlds through boards is tricky, Clara admitted, using boards to visualise new, fictional worlds is even harder – but essential in order to show proof of concept for fantasy and science fiction projects. She has recently been discovering this fact for herself while planning a new science fiction film. “I start these boards by working out my sets inspired by real world references. I need to clarify what kind of backgrounds I’m going to be placing the actors within to start telling the story,” she said. 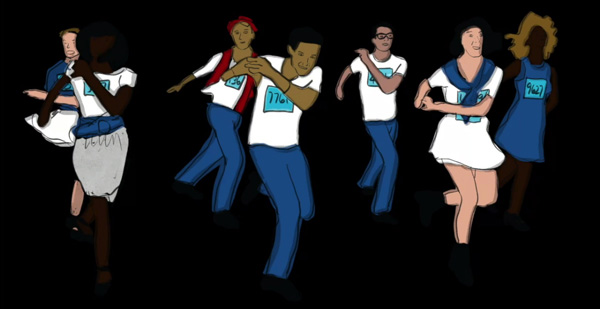 “I export my characters in a variety of poses as separate PNG layers so that I can place them into any background. Often I have to go through a variety of backgrounds, wardrobes and so on, and mix and match before I’m satisfied. However, this iterative, detailed work only happens on the iPad – NOT during formal development or in pre-production or during production itself where I am spending money and involving other people’s time.”

The Leap to Animatics

Another step she takes before working out her shot list in pre-production is turning the storyboards into animatics, back in Final Cut Pro X. She believes that adding motion to boards gives a director a critical edge. “It’s my animatics that have prepared me to always bring in my projects on time and on budget,” said Clara.

“To block the action within a scene, I import all the elements as separate layers from Procreate into FCPX as PNG files, and then add keyframes to animate them where I want them to move. Similarly, I add keyframes to my backgrounds – usually imported as JPEGS because they are a combination of several layers – and animate them to mimic the type of camera move I want – dolly, pan, zoom and so on. 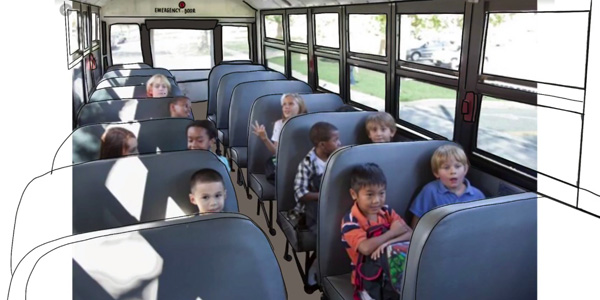 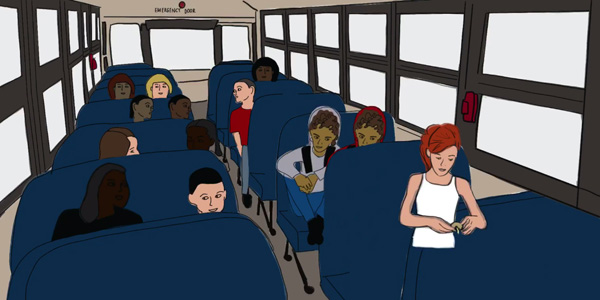 “For quick temporary animatics, I just voice everything and play every character myself so I can work out timings and then, depending on the complexity of the project, call in other voices to help differentiate characters. I prefer to work with music and usually bring on our composer as soon as we’ve won a project, editing the animatic with full sound design for timings and breathing space. For drama, I generally need to add more breathing space, whereas with TVCs or other promos, I can cut it fast and tight.” At times she may cut real footage into an animatic, where relevant, and add notes for herself and the crew as supers.

The key advantage of working with an animatic is that it fully prepares her for the shoot. She can delete extraneous shots, and check if she has missed any. Whatever changes she has to make on set – changes are inevitable – can be made confidently because she knows which shots are essential and which shots give her extra coverage for the edit.

Plotaverse is an interesting online software effects service that Clara has started using to add editable, animated effects – from watery looks to explosions – to her storyboards or animatics. Once she has traced and saved element layers out of her reference images, she can customise and apply animated effects from Plotaverse to give them independent motion and expression.

The time and cost implications of Clara’s previs technique are evident but what is also interesting is that the different applications on each of the devices don’t represent stages, one following the next, but happen literally all at once. That quality is where much of its value lies. Visualising how a story she has written so far will play out on set, shows where the script is weak, flawed or where she needs to add or remove a beat, or even reveal an opportunity to take an interesting new direction. Changes in the script might mean a different look for a shot or a change in its composition.   www.maincoursefilms.com