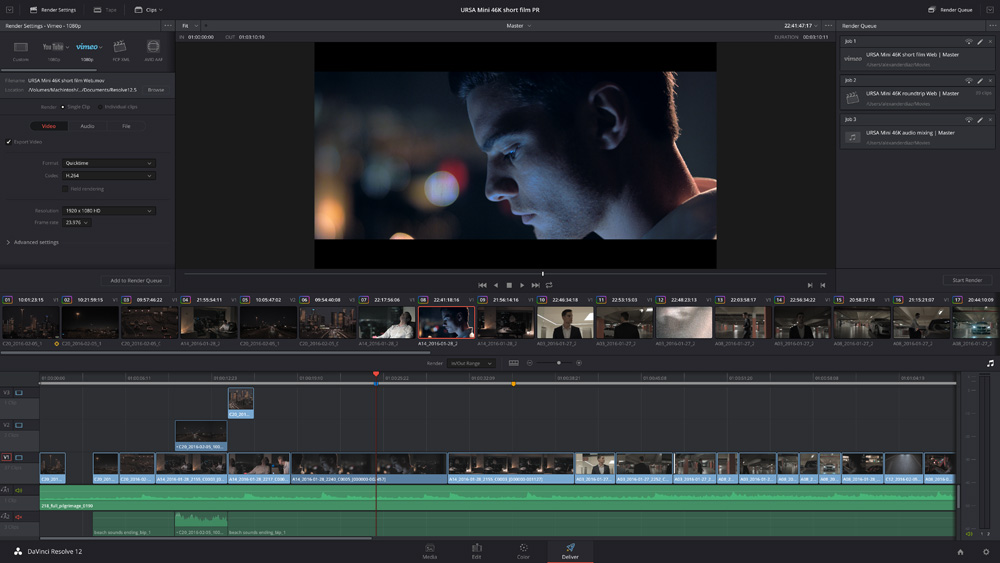 Among the editing and trimming upgrades are new swap and shuffle edits, trim operations, paste inserts and an expanded edit overlay with ripple overwrites and append edits. Timeline performance has been improved to speed up editing is faster and the new Cinema Viewer option plays video full screen, making it easier for clients to preview their cut on laptops or systems with a single display. 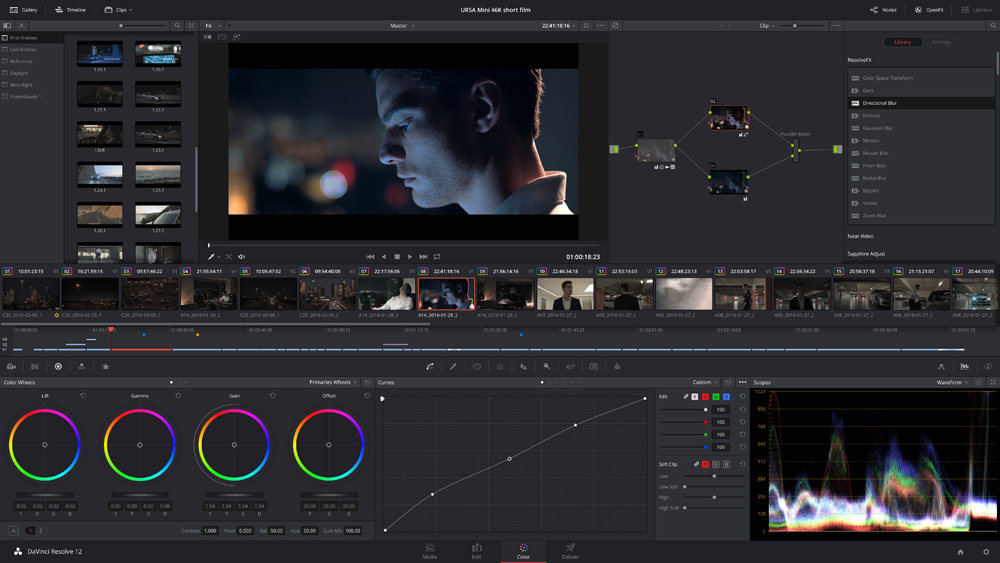 A number of media management and metadata tools were added to make it easier for assistants and editors to organize and work with very large amounts of media. A new metadata keyword dictionary, for example, allows you to choose common or previously created keywords and apply them to clips. Metadata can also be imported or exported via CSV files.

Media Pool metadata columns may be customized and saved, colours can be assigned to specific clips, and markers can now be single-frame or durational. Display names, which are used throughout the software, can be automatically created based on metadata tags such as scene, shot and take information, saving time when importing and working with quantities of footage.

New Power Bins in the Media Pool allow sharing of content between projects, making them useful for graphics, stock footage and sound effect or music libraries that are used across multiple projects.

To create custom retime effects and speed ramps, DaVinci Resolve 12.5 now has separate curves for both frame position and playback speed. This allows any frame to be moved to any point in time, while also allowing variable speed changes between ranges of frames. These new controls make it easier to create completely new, tailored retiming effects. The timeline curve editor has been improved so users can now select, move and edit groups of multiple keyframes at the same time. There are also new visual controls for adding or selecting keyframes, and a menu for selecting specific parameters and curves to edit. 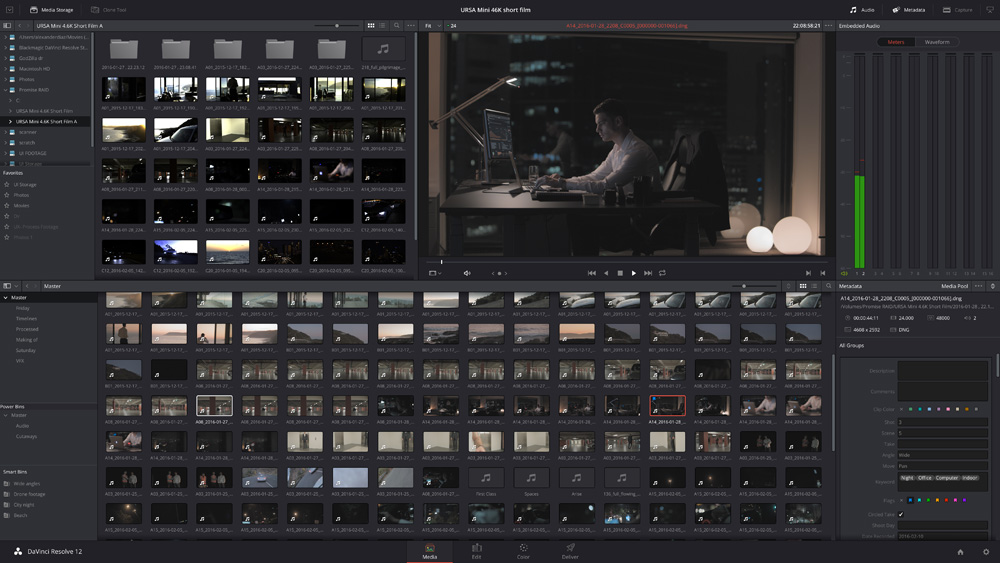 For colourists, major changes to the node editor make it possible to quickly navigate between nodes, swap nodes, select multiple nodes with a lasso, copy node contents, extract nodes or use embedded alpha channels in mattes. When dragging a saved grade from the gallery, a user has the option to drag the grade in as a single compound node, or as a fully expanded node tree. These changes mean professional colourists can work faster, and video editors can learn how to use Resolve’s massive set of color correction tools more readily.

A new single point tracker, new temperature and tint sliders have been added to the primary grading controls, further XRite Colorchecker charts are now supported in the Colour Match palette and users can now select and modify multiple control points at the same time when working with Power Curve Windows.

DaVinci Resolve 12.5 has been already used to grade HDR content from cameras such as Blackmagic Design’s URSA Mini 4.6K that are able to shoot with the latitude needed for HDR work. The software’s HDR grading controls include specific nodes that may be set to HDR mode, which enables the grading tools in Resolve to work in an extended dynamic range especially designed for HDR deliverables such as Dolby Vision and HDR10.

Caching formats such as ProRes 4444 XQ and DNxHR now support extended dynamic range to serve as an efficient storage alternative to uncompressed 16-bit float files. These enhancements mean Blackmagic Design is one of the few packages with a complete HDR workflow - from production on set to post production. 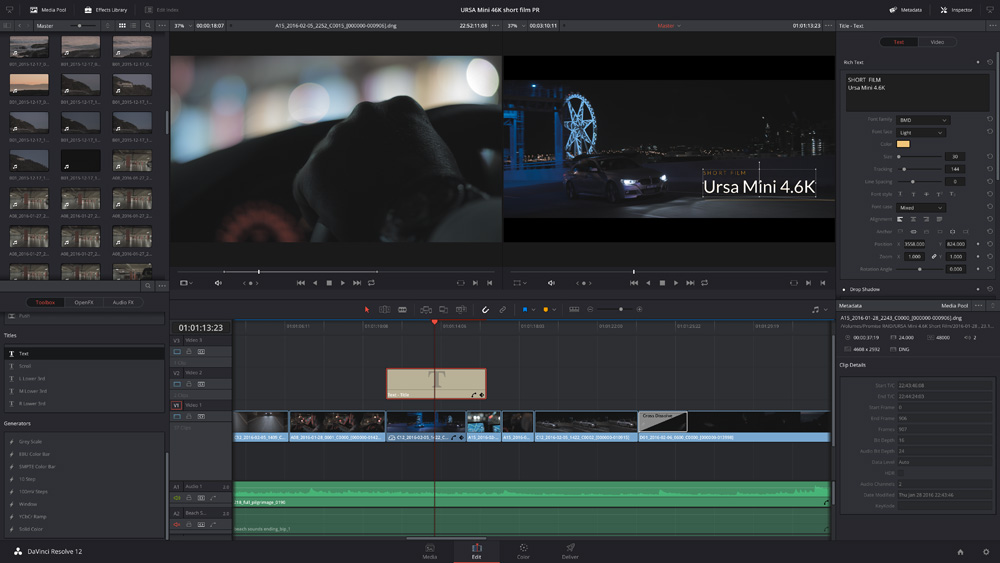 The application introduces ResolveFX, a new framework for native GPU and CPU accelerated effects. This first release includes ResolveFX plug-ins such as GPU accelerated colour space and gamma transformations, plus the traditional effects such as lens blur, light rays, emboss, dent, vortex, mirrors, gaussian and other blurs, glows, ripples and so on.

More advanced ResolveFX tools like film grain, lens blurs and flares are available with DaVinci Resolve 12.5 Studio. For more sophisticated visual effects work, the new Fusion Connect function allows clips to be sent to Fusion for 3D compositing software. When scenes are rendered out of Fusion, they automatically replace the clips on Resolve’s timeline. As effects shots are completed, the Fusion Connect clips in the Resolve timeline can be refreshed to show the most current version of the shot.

The Deliver page has been redesigned to help users find presets, customize render settings and organize jobs. With the icon browser, customers see and select output presets, which include a new Premiere Pro export, with presets for ProTools, Avid, Final Cut Pro, Vimeo and YouTube.

Audio can now be output independently of video as single or multichannel, and clips can be exported with an alpha channel when using supported codecs such as ProRes 4444, ProRes 4444 XQ and uncompressed RGBA.

Improved spatial noise reduction, combined with the improved temporal noise reduction controls uses a multiple-GPU accelerated algorithm to reduce noise while retaining the detail. A new automatic correction tool for fixing barrel, pin cushion or perspective lens distortion includes de-interlacing, support for camera LUTs, the DaVinci Colour Transform Language .dctl, and the ability to create ProRes remote render jobs on Windows machines. Customers can even use a terminal command to run a headless version of DaVinci Resolve, without the GUI, for remote rendering.