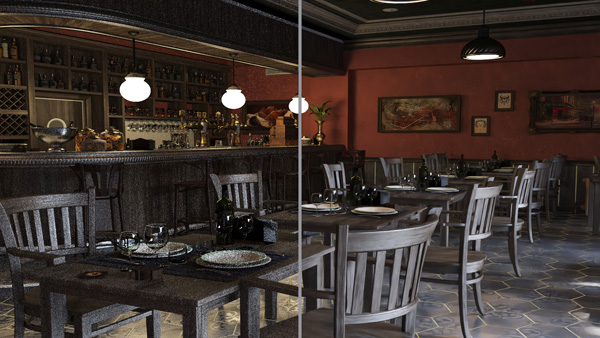 NVIDIA is applying artificial intelligence to rendering with the launch of NVIDIA OptiX 5.0 SDK, which incorporates new ray-tracing capabilities.

Running OptiX 5.0 on the NVIDIA DGX Station, a desktop AI workstation the company recently introduced, will give designers, artists and other content creators the rendering capability of 150 standard CPU-based servers. According to NVIDIA, this access to GPU-powered accelerated computing will increase users’ ability to iterate and innovate faster and with higher performance, at a lower cost.

“Developers using our platform can make it possible for artists and designers to access the capabilities of a render farm at their desk,” said Bob Pette, vice president of Professional Visualization at NVIDIA. “By creating OptiX-based applications, they can pass on the power of AI to users, supporting creativity and potentially improving productivity.”

OptiX 5.0’s new ray-tracing capabilities will speed up the process required to visualise designs or characters, increasing a creative professional’s ability to interact with their content. It has new AI denoising capability to speed up the removal of graininess from images, and brings GPU-accelerated motion blur for realistic animation effects. OptiX 5.0 will be available at no cost to registered developers in November 2017.

For some background information on the hardware mentioned above - NVIDIA built the DGX Station as a personal supercomputer for companies researching AI development for their own and their customers’ applications. It has the computing capacity of four server racks in a desktop machine, using less than one-twentieth the power. It contains four NVIDIA Tesla V100 [Volta] GPUs, NVIDIA NVLink and Tensor Core architecture.

NVLink is a high-bandwidth interconnection supporting high-speed communication between the CPU and GPU, and between GPUs. Tensor Cores are a new type of core for the Volta GPU that is a more rigid but still programmable core designed specifically for deep learning operations. NVIDIA says the DGX Station delivers 3X the training performance of the fastest workstations, with 480 TFLOPS of performance and FP16 precision. Their developers also estimate that to achieve equivalent rendering performance of a DGX Station, content creators would need access to a render farm with more than 150 servers that require about 200 kilowatts of power, compared with 1.5 kilowatts for a DGX Station.

NVIDIA is working with various outside software developers and technologists from film studios to set the course for the use of AI for rendering, design, character generation and the creation of virtual worlds, who generally support the company’s progress so far. Vice President and CTO at Pixar Steve May has been following how NVIDIA’s AI will affect the filmmaking process. Nicolas Guiard, Principal Engineer at Isotropix, said that AI has reduced their development costs while porting the ray-tracing core of their Clarisse renderer to NVIDIA GPUs and achieves extremely fast performance. “With the potential to significantly decrease rendering times with AI-accelerated denoising, OptiX 5 is very promising for production workflows,” he said.

NVIDIA is also taking measures to support new workflows such as video editing, interactive rendering, VR content creation and AI development by making it easier to upgrade the capability of notebooks, laptops and other computers with underpowered graphics. The power of NVIDIA TITAN X or NVIDIA Quadro graphics cards can now be accessed through an external GPU chassis [eGPU], in effect raising the performance of their applications.

NVIDIA recognizes that although more computer power is needed for VR, photoreal rendering and AI workflows, the mobile systems that many artists like to work on now are becoming thinner and lighter, with limited performance and memory. Their eGPUs can now solve this problem, by allowing users to plug into more capable GPUs when working on graphically demanding applications.

Quadro graphics will be available through qualified eGPU partners for those who use compute intensive software for animation, colour grading and rendering, and also CAD and simulation applications. The qualification process assures users of compatibility, reliability and performance of the Quadro eGPU system they are buying into. For suitable performance with applications such as Autodesk Maya and Adobe Premier Pro, NVIDIA is also releasing a new performance driver for TITAN X cards to make them run faster.

Available starting in September 2017, Quadro eGPU systems will be available through some qualified partners with more to follow.  www.nvidia.com