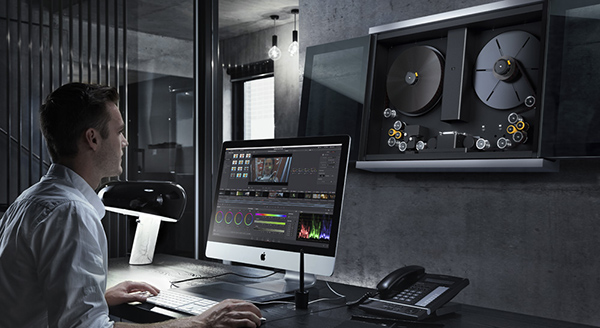 Blackmagic Design's free Cintel 2.1 software update adds new functionality including compressed RAW recording, live audio preview and small film reel support, plus improved film stabilisation and other tools to the Cintel Scanners. Cintel film scanners are in use around the world to convert valuable film libraries into Ultra HD video that audiences can watch, while the originals are preserved.

The 2.1 Update's new image stabilisation is entirely automatic with sub pixel accuracy for Cintel Scanners, and works even if source film has badly damaged or missing film perforations. This update also adds two new functions designed to reduce file sizes. Images can now be cropped so that only the active image area is saved in the file. Furthermore, Cintel users can now have the option to save images using Blackmagic Design’s visually lossless compressed RAW format. The combination of these two functions results in significantly smaller file sizes.

When used with the Cintel Audio and KeyKode reader, users can now watch a live audio preview while scanning. This works in a similar way to a traditional tape recorder with which the user can scrub back and forth and hear the audio speed up and slow down as they work. Two other changes this update adds are new optical audio equalization for flatter response and a new slow advance function so users can slowly advance the film by holding down the frame advance buttons.

Cintel 2.1 Update has better artifact handling in the highlight areas of negative images. It supports small film reels and has an image flipping option when reading audio from the negative. It also achieves more accurate keykode alignment so that the keykode is aligned to the back edge of code instead of the front.

“Cintel film scanners are being used around the world to convert precious film libraries into Ultra HD,” said Grant Petty, Blackmagic Design CEO. “The new Cintel 2.1 Update is exciting because it gives customers incredibly powerful new features, such as smaller files and incredible stabilization that will help them save even damaged film. Plus, the update is totally free of charge which means customers don’t have to pay for these new features!”