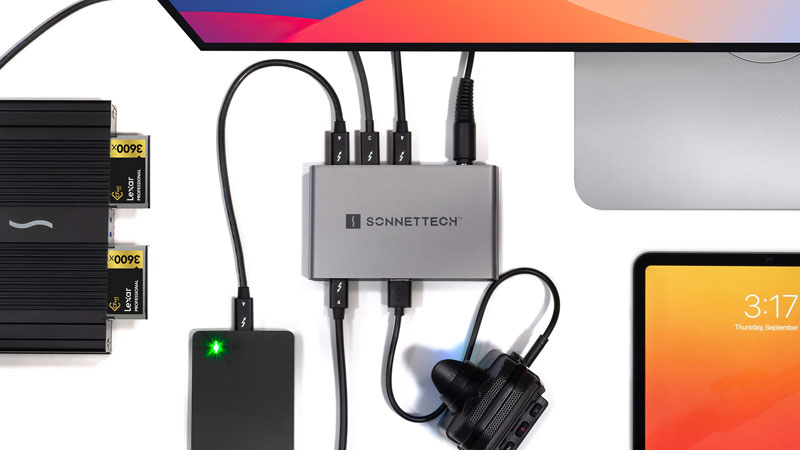 Thunderbolt hubs form a central place to connect computer peripherals — such as storage devices, input devices and displays when a computer has fewer ports than required. Sonnet’s Echo 5 Thunderbolt 4 Hub means notebook, laptop and iPad Pro users can to connect to all their peripheral devices at once through a single Thunderbolt cable.

The Echo hub can also charge compatible computers with up to 85 watts of power through the same cable. Depending on the computer or iPad Pro that the Echo hub is connected to, it also supports connection to one display screen of up to 8K, or two displays of the same resolution, up to 6K.

Many current notebook and laptop computers are actually built with fewer peripheral ports than the models of the past, limiting the number of devices that can be plugged in directly. Also, because one computer port often has to be used for charging, peripheral connectivity is reduced further.

Sonnet’s Echo 5 Thunderbolt 4 Hub overcomes these limitations by enabling the connection of up to nine devices at once, including up to two displays and charging the computer, all through a single cable. With its three 40Gbps Thunderbolt 4 (USB-C) peripheral ports and one 10Gbps USB Type A charging port, the Echo hub connects the wide array of devices available now, from the past and in the future. It is equipped to support high-performance peripherals as well. 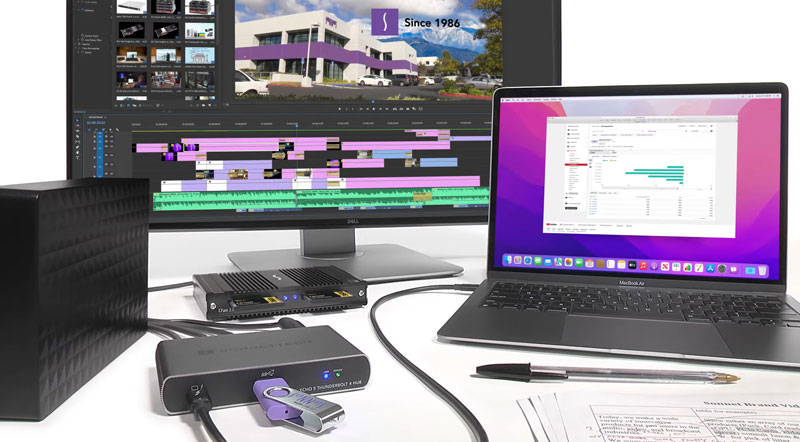 For users with more USB than Thunderbolt peripherals, the Thunderbolt 4 ports also support USB 4 and USB 3 devices, including displays, when connected with the correct cable or adapter, even at the end of a Thunderbolt device chain. Sonnet also designed the hub to supply up to 85 watts of power through its computer connection and charging port so that it can charge and power a wider variety of computers at or near full power.

The Echo hub’s 10Gbps USB Type A charging port supports most USB peripherals, including the super-fast USB NVMe SSDs at full speed. The USB Type A port on the Echo 5 supplies up to 7.5 watts of power to make sure that bus-powered devices will operate without fail and can be used to charge a phone or tablet.

When used with an iPad Pro with a Thunderbolt port, the Echo hub has the same capability to connect multiple devices to their tablet at the same time, while also charging it at full power. Users may also connect a single display up to 6K to mirror the content on the iPad’s built-in display.