One of Us Creates a Crowning Glory for ‘The Crown’

One of Us Creates a Crowning Glory for ‘The Crown’ 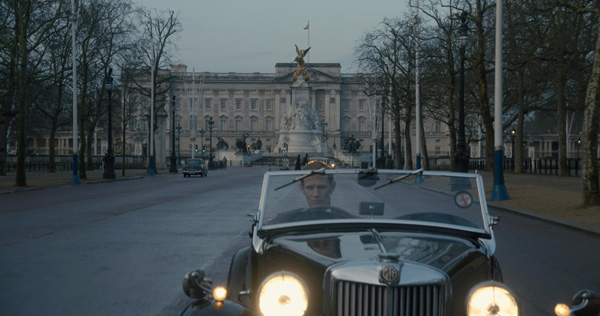 ‘The Crown’ is a Netflix original series giving audiences a view of the life and world of Queen Elizabeth II as a 25-year-old newlywed, faced with the prospect of leading her country’s monarchy following World War II, while forging a relationship with Prime Minister, Sir Winston Churchill. As her coronation approaches, the British Empire declines, global politics fall into disarray and a new era is dawning.

Primary VFX vendor One of Us completed 428 shots for ‘The Crown’. The visual effects focus on creating a believable, contemporary world to support the narrative - invisible, photo-real work including digital set extensions, environments, crowd replication, CG aircraft and Buckingham Palace from the late 1940s onward.

The company’s team produced shots for a very wide variety of sequences, including Elizabeth and Prince Philip’s Royal Wedding of 1947, the funeral of King George VI and her subsequent coronation as Queen Elizabeth II. Other scenes recreated various scenes at Buckingham Palace, Downing St, London airport and her 1953 World Tour. 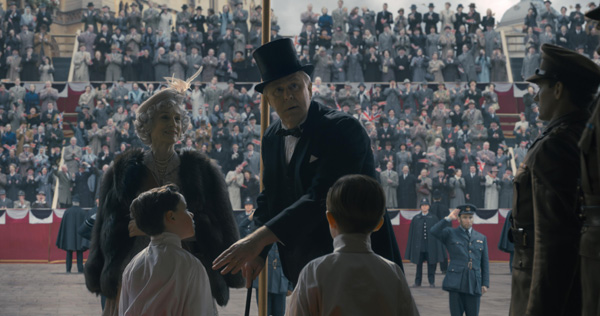 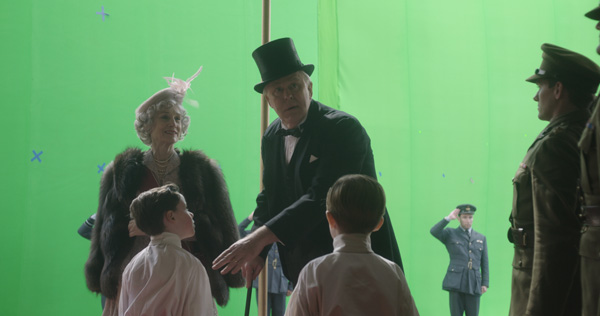 While working on this series was an exciting prospect in terms of subject matter, the artists needed to be prepared to deal with continuously evolving scripts, four different directors, working at 4K resolution, historical and period accuracy and above all, making certain that their work would be believable but invisible, sitting comfortably next to the real locations and sets on screen.

One of Us were heavily involved throughout an eight-month pre-production process, until shooting commenced in July 2015, and then into post. At its peak their team included up to about 35 people. They completed delivery in early July 2016.

'The Crown' was shot at numerous locations around England and Scotland. The team’s VFX Supervisor Ben Turner visited the locations relevant to their shots, assisted on set by digital compositor Jon Pugh who gathered all VFX data required. Ben would attend all technical recces at these locations as well, and then supervise on the shoot days. 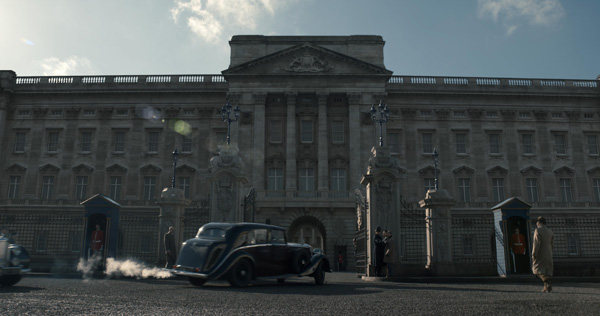 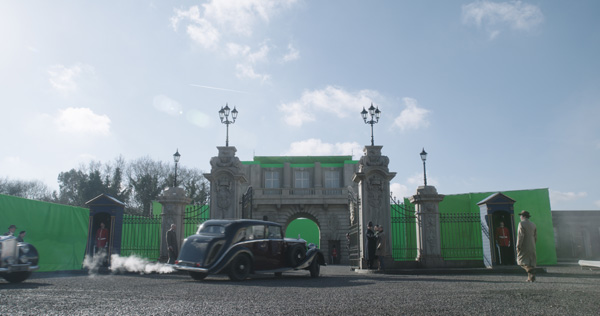 Production design, led by Martin Childs, and set construction and dressing were a huge, carefully researched and beautifully constructed element of the series. Most scenes were captured at real places, not on studio sets, and had been chosen very carefully for their period authenticity. “Obviously, in central London, where the streets have changed so much over the last 50 years, we had to remove many satellite dishes, plate glass windows, and lots of modern road markings. We also changed the look of the traffic lights and bollards on The Mall to reflect the time period,” Ben said.

“Nevertheless, because authenticity was so critical to the producers, we needed to retain the existing details as far as possible and make sure any extension work was sympathetic to those locations. We used a lot of archive footage as reference, supplied by the production, as well as communicating and working very closely with the production designer’s and art department’s references to keep the authenticity consistent.”

One of Us held two dedicated VFX unit days at Elstree Studios, primarily to shoot crowd elements to fill out the various scenes that needed crowd augementation. They were also able to gain access to a central London rooftop to take reference photography for our Downing Street rooftop shot in episode 4. 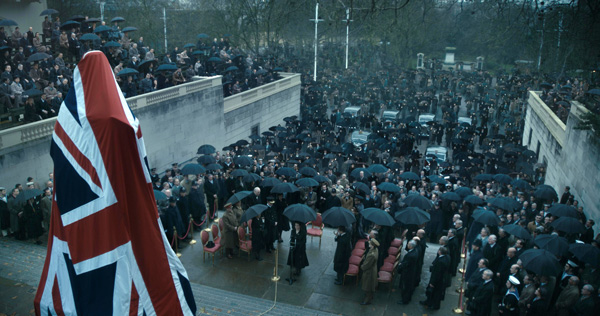 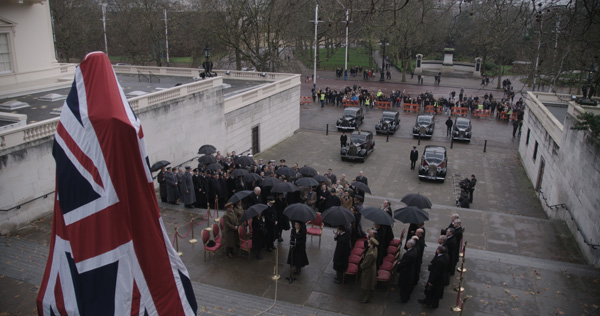 For the invisible, photoreal VFX work they were doing, integrating 2D and 3D elements into plates accurately was crucial to the success of the shots. Being able to attend the shoot whenever necessary meant they could gather chrome ball and HDR reference for lights and do their own set surveys on the day. This, together with detailed set drawings from Art Department, gave them all the information needed for the integration work.

Furthermore, although a lot of the integration was done as usual in the composite, all digital mette painting and environment renders were completed to a high standard on a shot specific basis, and rendered in Arnold. In those cases most of the remaining integration work could focus on the interaction between the plate and the CG.

An interesting challenge came in fulfilling the vision of each of the series’ four directors within the framework of a TV schedule and budget. “Each director had their own individual style, which kept things fresh and enjoyable,” said Ben. “Shooting and post were divided into blocks per director. Although we had some overlap, because the post schedule was structured this way, our artists were able to move neatly between episodes.” 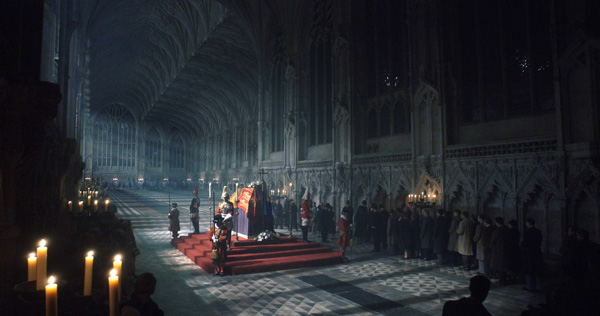 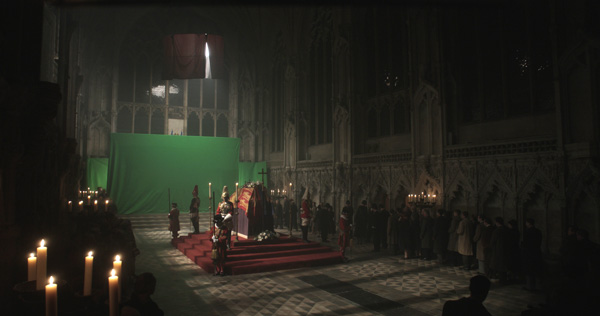 The team’s key sequences - recreating the Royal Wedding, King Gerge VI’s funeral, Elizabeth’s coronation and her World Tour visits – depict events that have been thoroughly documented and widely publicised since they took place. For the artists, that fact was helpful in terms of reference, but also means that many viewers feel they know how those events should look. “Actually, we saw that as an advantage. We were as keen as anyone for these events to feel authentic,” Ben said.

“We referenced archive footage from those times and had many meetingswith the production prior to filming, to inform our own design process – especially for the Coronation to make sure our environment for the greenscreen studio coronation scenes maintained the scale demanded by the structure of Westminster Abbey. We maintained this dialogue throughout post with all of the directors and production designer.”

Authentic crowds of the required scale, which would have been virtually impossible to achieve in-camera were essential to the royal events. The work on such scenes ranged from a handful of extra background characters to large crowds of thousands – those larger ones were at the Racecourse, looking out from the balcony at Buckingham Palace, and the unveiling of the King's statue. The size and quality requirements also varied from a couple of pixels high to almost full screen, so whatever assets they used had to hold up in all situations - at 4K resolution. 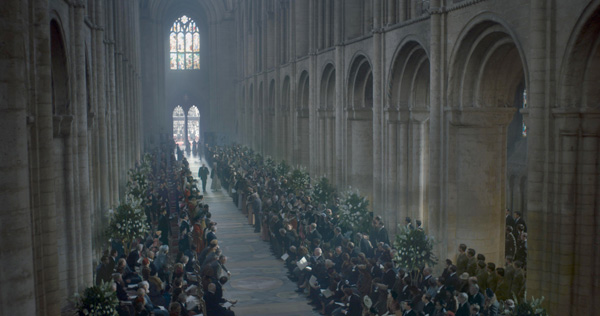 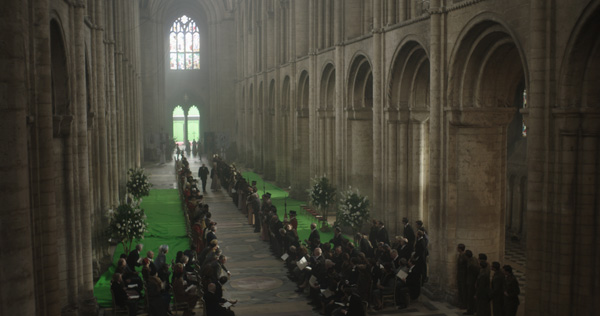 “Quite a few scenes were standard crowd replications, combining several plates of crowds in different positions, but sometimes that wasn't possible on set. We looked at a variety of options, including CG digi-doubles for distant crowds, but in the end decided to make our own in-house 2.5D tool in NUKE, using cards and actors shot on greenscreen. This meant creating a large library of characters in different costumes, angles and sizes - each performing a variety of actions - some on treadmills, some with umbrellas, some on bikes,” said Ben.

“The costume designers had paid very close attention to detail on set, so that same attention needed to carry through to our crowd replication as well, involving working on set on many different shoot days for those sequences to cover all the different occasions. Any time there was a pause  on set, the background actors were dragged aside to perform these actions on greenscreen, usually in small groups, spaced apart to make best use of time.

“Our tool itself was a card generator that gave the artists a choice of crowd elements, letting them choose the costume, angle, resolution and actions required. The artist could dial in a percentage of clapping, waving, booing, standing, cheering actions to give a bit of variety. You give it a ground plane card and it would generate cards at whatever density you require to fill that plane. We also added weight mapping, enabling the artist to paint a simple map in 2D to control the density of the crowd in different areas.” 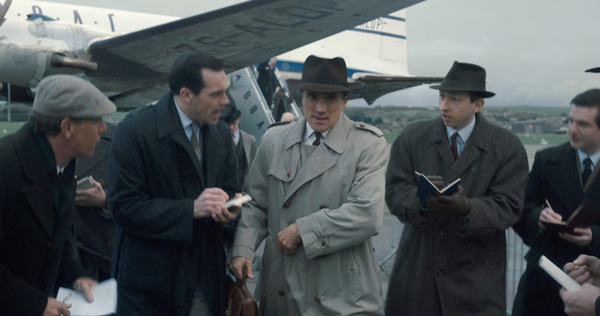 The material for the digital set extensions came from a combination of sources - original photography for reference, and  then shooting and combining new photos with their own paint work to give them the feel of the originals. Downing Street created special challenges. As Ben said, “These two locations are possibly the most recognisable and well photographed addresses in the world. This meant that there was nowhere to hide with our set extensions.

“Thankfully, at both locations we were able to take our own photographs to use in our extensions. Then it was usually just a case of adding layers of post-war grime to fit the time period and story requirements, but both set extensions were built as 3D models to allow us more versatility in our approach during filming across all ten episodes.”

The CG aircraft, a DC4, was a special case. A real vintage DC4 exists in South Africa, which the production was able to paint in contemporary BOAC colours and use for filming on location there. During this time One of Us had a chance to gather a large amount of reference photography that they used in conjunction with Enwaii and Maya to build and texture their CG model. Then they added further detail on a shot by shot basis in the digital matte paintings, as mentioned, before handing them to compositing. 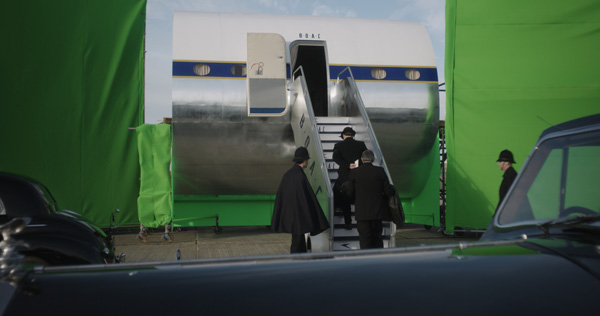 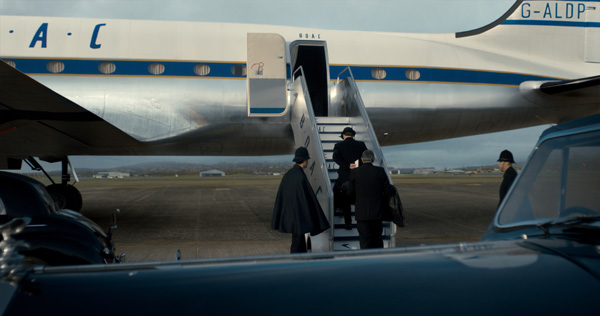 “We first found out about Enwaii when we were building Neuschwanstein Castle on ‘Monuments Men’,” said Ben. “It's fantastic for certain types of structures, buildings, aeroplanes, ships and so on. We employ other types of photogrammetry at One Of Us but Enwaii has proved invaluable when we need to end up with a fully functioning asset that needs to be relit and viewed from any angle.

“It involves modelling everything from scratch based on an Enwaii camera solve but the software enables us to work very quickly and keep the scenes light weight. Just like any other type of photogrammetry, the results tend to look very realistic straight away because, based as they are on photographs, the camera solves naturally give you very accurate scale and proportions.”   www.weacceptyou.com