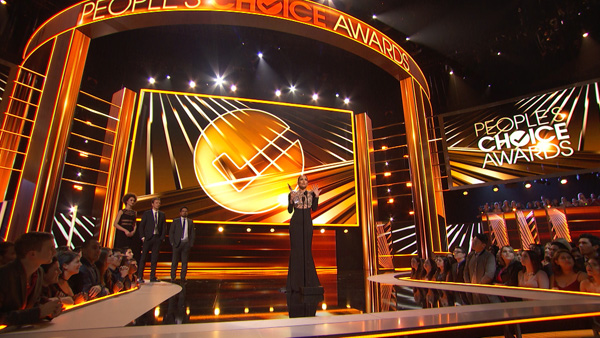 Syndrome Studio, specializing in design and animation for major entertainment, advertising and brand clients, has just created an on-air and on-stage graphics package for the 2017 People’s Choice Awards. The show aired on CBS on 18 January and marked the seventh consecutive year that Syndrome Studio worked with Mark Burnett Productions to create the broadcast and stage content for the event.

The studio is unusual because they can design, create and deliver both the broadcast and the on-set graphics packages for the People’s Choice Awards. The show’s Screen Producer Laura Frank said that this ability makes Syndrome studio the ideal type of creative partner for the event. “Working with a single team helps us tie the show together visually. These are not common skill sets to find in one team, and Syndrome’s commitment to explore the complexities of graphics for scenery is invaluable. They make fantastically pretty pixels,” she said.

Syndrome Studio has an aptitude for broadcast and on-stage graphics for live television awards specials. As well as the People’s Choice Awards, Syndrome has designed award show packages for the MTV Movie Awards, the Primetime Emmys, IFC (Independent Film) Independent Spirit Awards, the PETA Fashion Awards and many others. 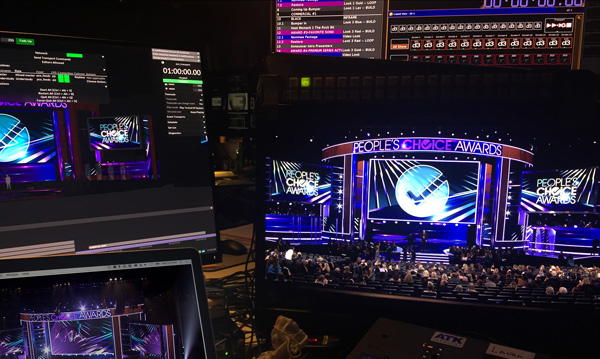 “For us, one of the best aspects of award shows is building up a graphic experience around the show's theme and our client's vision," said Syndrome founders and Creative Directors Micah Hancock and Mars Sandoval. "We love creating a cohesive design system that begins with the show logo and extends to the stage graphics and then scales out to the on-air package. It's very rewarding when all of these layers flow together to create the whole experience."

Similar to a feature film or TV series, a lot has to happen before any content creation starts. Even when they production team sits down at the workstations, they go through look development, design, animation blocking with previz, editing and test stages up until the day before broadcast. Micah Hancock talks through all stages here.

Because the People’s Choice Awards broadcasts in January, the project usually begins in September or early October with initial styleframe explorations of the logo and overall mood. If the set design is already underway by this time, it gives them some creative direction. “To start the collaborative process with the show's executive producers, we spend a couple of weeks developing a look and feel, centring on the show logo first, as this is the most critical part of the show’s branding,” Micah said. 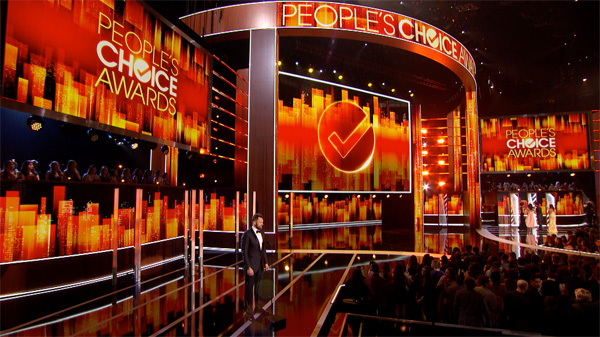 “Once we agree on a style, we storyboard out all of the award category graphics and broadcast package elements.  With over 100 deliverables, it’s key to lock down the look and function of each graphic as a still frame first, before jumping into the more time-consuming animation phase.  Once all those frames are approved, we execute everything that will appear on-air, developing an efficient workflow that enables a fast turnaround of revisions. This animation phase is the bulk of the work, continuing throughout December with requests for new elements coming in right up until the day before the show in January.”

Simultaneously, they begin designing the stage graphics.  For the look and feel of the stage, they build on the style of the broadcast package. “We strive to create a unified look that flows from on-set to on-air and really brands the show, so we approach the design as a brick-by-brick process, where each layer builds upon the last.  After a few rounds of styleframes to establish the design with the show’s producers and screen team, we dive into the animation of the stage content.  This runs right up until the week of the show, where we create several iterations of each stage setup and output a toolkit of different colour options for the screen team to play with. 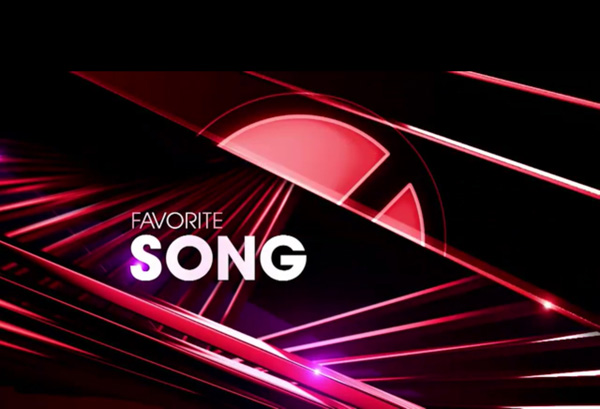 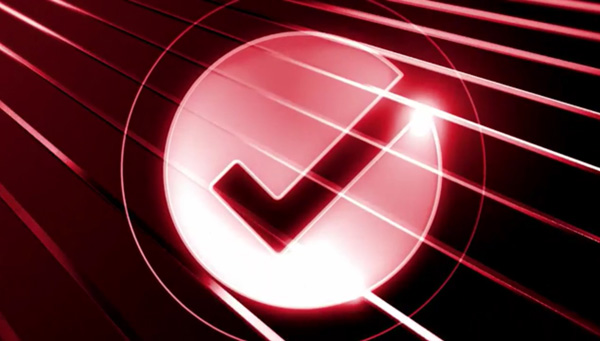 “Lastly, we design and animate some of the backgrounds for the music performances. In this year’s case, it was for Blake Shelton.  This part of the show is always our big final phase, as the performers may not confirm until a few weeks before the event.

“Collaboration and communication are essential at every step.  From the broad initial creative explorations down to the nitty-gritty details of the screen formats. With all of the moving parts of a big show like this, an open dialog between us and all the other departments is crucial.  Luckily, we have been working with the same team on the People’s Choice Awards for the past seven years, making it a pleasure to be a part of again.”

One of the challenges of creating graphics for the large scale awards is the fact that they unfold live on the air. The producers must be prepared for anything. Syndrome’s job is to supply enough material to constantly keep the imagery fresh for the viewers and to cover any unforeseen changes that are the nature of a live broadcast. “Our approach was to create a modular package of interchangeable graphic elements that allowed flexibility right up to the last critical minute, when the show is being edited on the fly and broadcast live,” said Micah. 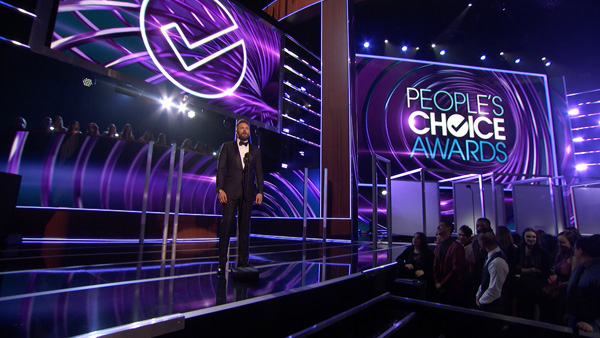 Syndrome supplies material to two different teams on the front line of production - one team is dedicated to the live broadcast, and the other controls all of the stage screen content. The live switching of the graphics on-set is handled by the screens team. “We work with them to determine what they will need. Then, although we pre-build as much of that screen content as possible, we deliver it as a flexible package of interchangeable elements.  For example, each stage background is created in several different colours to create a range of moods throughout the event.

“We can make them loopable to account for timing changes and sometimes, the backgrounds will be designed to reveal with an alpha, so that they can smoothly transition into one another at any time in the show. Our goal is to always give the screens team as much ammo as possible.”

The PCAs required imagery for three large screens on the stage at the venue - the Microsoft Theatre in LA - several screens along the sides and the on-air package, including the lower-thirds and motion graphics introducing show and movie clips, called nominee packages. Further imagery played on the outdoor screens at on the night of the event. 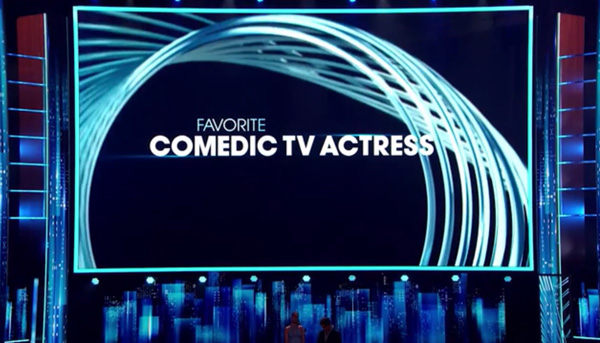 Micah said, “The nominee packages involve a separate graphic toolkit of mortises, overlays, transitions and title cards, in the same stylistic spirit as main broadcast package. We worked with editor Buzz Chatman, who assembled all of the pieces for each category.

For the stage, we created content for the three main screens, several narrow screens and vertical pillars framing the set, and the essential background behind the presenter.  While this one is a smaller screen, it is also the one most scrutinized. Visible behind any close-up of the stars on stage, it receives more air-time than any of the other elements.”

Making sure the graphics project and run correctly at the show requires gathering all the specifications of the physical sets and screens. This task varies for each kind of live event, depending on how large or complex the set design is, but generally begins with the stage schematics from the set builders.  From those, the exact location of the screens is determined, how they are configured, and the overall physical layout of the space.  The screens team will combine this information with the pixel dimensions for each screen and technical requirements for the playback system.

“We use Photoshop and Illustrator heavily throughout this process, especially when we are exploring initial style concepts, and later when we are creating elements to use in the animations.  For the actual 3D imagery on this particular project, we used Cinema4D to model and animate, and Maya to texture, light and render.  Ultimately, everything ends up in Adobe After Effects for compositing, additional graphics and final output.

“For the stage graphics, we output QuickTime files for the various screens with the HAP codec, the preferred codec for the theatre’s on-set playback system.  The broadcast package, while having far more pieces than the stage graphics, was a standard delivery of uncompressed HD QuickTime.”

Anticipating whether an animation that looks beautiful on a desktop workstation screen, will also look beautiful on camera, on a giant screen from hundreds of metres away, is another challenge. With the stage schematics and pixel dimensions clearly set out, they can devise a way to preview how the graphics will look. For smaller, simpler shows, this might just mean arranging the screen content side-by-side so they can see how it plays together. But for a big show like the PCAs with multiple screens at different sizes and depths, a previz file is used.

Micah said, “We create a basic 3D model of the stage with all of our content mapped onto it, to give a more accurate picture of how everything will look on-set and on-air. In the case of the People’s Choice Awards, the screens producer Laura Frank is extremely experienced and thorough.  She created an accurate previz file for us beforehand, saving quite a few steps and eliminating some of the guess work of how the screens would play together.”

“Another key factor is an on-site testing day.  A few days before the show, we output all of the stage content for a test run at the Microsoft Theatre.  Everything was reviewed on the actual set, at scale, with the show’s director, producers and screen team. Seeing the graphics in their final habitat, we went over each element and noted any adjustments needed to speed, placement, colour and design.  After testing, we could quickly make a few revisions and deliver our final passes.”

Following the People’s Choice Awards, Syndrome Studio has created broadcast and stage packages for the 48th annual NAACP [National Association for the Advancement of Colored People] Image Awards, airing live on TV One on 11 February 2017. www.syndromestudio.com 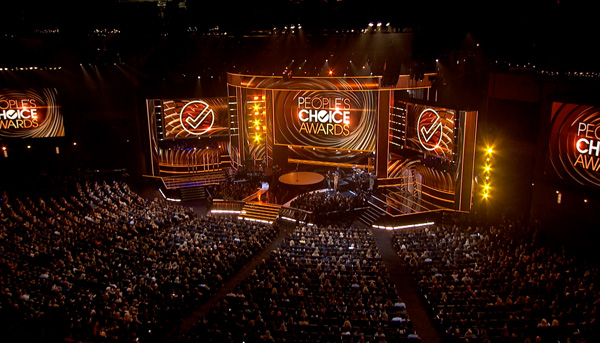