Union Brings Drama and Intrigue to ‘My Cousin Rachel’

Union Brings Drama and Intrigue to ‘My Cousin Rachel’ 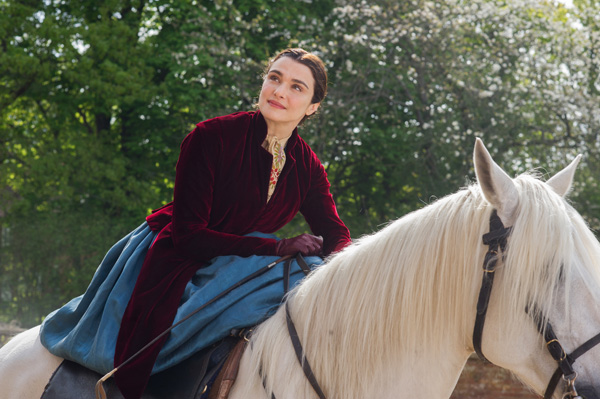 Director Roger Michell has directed the first adaptation of the famous novel ‘My Cousin Rachel’ by Daphne Du Maurier, since the early 1950s. He wanted the audience to continually question their judgement of Rachel as they watched the story evolve. Is she in fact a cold-blooded gold-digger, or simply a grieving widow who doesn’t conform to the social and gender conventions of the time?

The beautiful Rachel quickly becomes a controversial, divisive character as the story turns darker, dangerous and eventually tragical. When watching such a story, audiences may think about costumes, antiquated language and period furnishings, but not many stop to consider visual effects – and that is the way it should be, according to the director. “CGI in my view is all about restraint,” said Roger Michell.

“You can do absolutely anything these days and you have to learn to pull back and make sure that the work is absolutely integrated into the story and the image. The last thing you want is for anyone to come out of the cinema raving about the CGI. It’s a tool that should be wielded poetically. A little can go a long way in the right hands.”

In this case, the right hands belonged to the artists at Union in London. Having worked with Roger before on 'Le Weekend' and 'Hyde Park on Hudson', VFX supervisor and Union co-founder Adam Gascoyne and his team helped recreate the environment of the story, enhancing the looks, suspense and drama. See a breakdown video of their visual effects work, here. 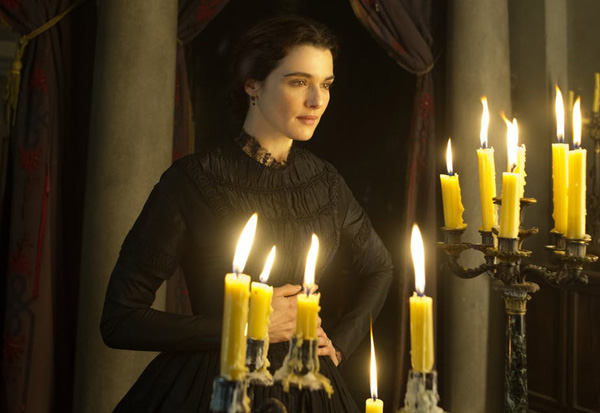 Adam said, “Union first got involved a few weeks into pre production. We carried out preliminary surveys of locations and used the storyboards to work up previs for the two stunt sequences we contributed to. By the end, we worked on 139 shots that needed mainly invisible effects."

The story is set somewhere in the West Country of England, bounded to the north and south by the sea, but the principal location was in West Horsley in Surrey - miles from the coast and precariously close to a major road. Green screens were placed outside the windows of the set and to some of the exteriors, allowing the team to create a different landscape which seems to fall away to a sparkling coastline.

Several matte paintings were required to show the passing of the different seasons, because an important story point for the audience is seeing it unfold over the course of a year as part of the action. “Given that West Horsley is so far from the coast, our matte paintings were all based on locations we found during the surveys and investigations,” Adam said. “We looked at a few different types of cliff and ended up with one that combined multiple locations including Kingsbridge near Plymouth, which we photoscanned using a drone. 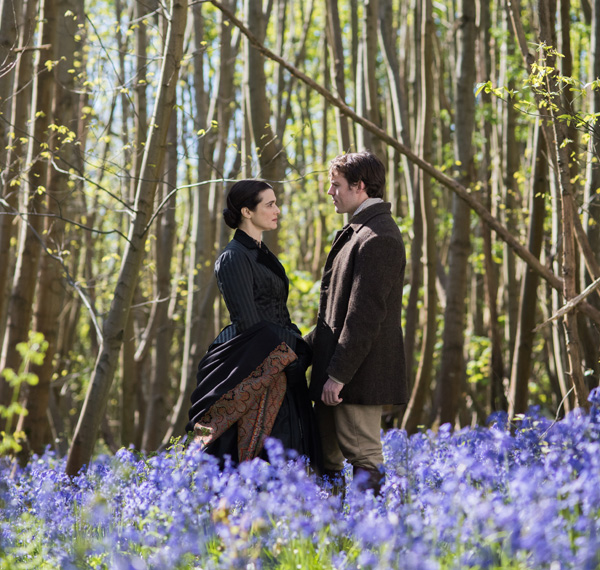 “To create the seasonal matte paintings as well with realistic, environments consistent with the plates, we had surveyed in spring and shot in summer, taking lots of photos which we combined with other reference photos we found of the West Horsley area at different times of year. We visited the location at multiple times during the year, so were also able to get stills of all the different seasonal views.”

The team needed to add atmospheric rain and snow effects in multiple scenes, including a shot filmed on one of the hottest days of the year, which they transformed into a winter landscape. Various scenes throughout the film are enhanced with flocks of birds as well, partly in homage to Du Maurier’s novel ‘The Birds' that was produced as a film by Alfred Hitchcock. “We always tend to use a combination of 2D, 3D and FX for this kind of work, but the refraction of rain on the walls of the house was a projected CG render. The addition of birds was another mix, but mainly CG in order to control their size, movement and behaviour,” said Adam.

Some of the most interesting uses of visual effects were those that accentuate specific plot points in the story. For example, the lead character Philip discovers a weakness in a cliff path when his horse stumbles and he nearly plunges over the edge. This hazardous spot was the location for two sequences that involved stunts with horses and special shooting angles. The approach was to film the horse faltering on a hydraulic drop platform and then composite this live action footage into drone footage of the cliff edge. The edge was also built in 3D and the collapse animated in Houdini. 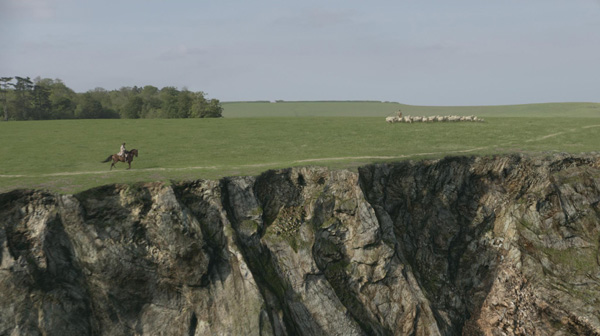 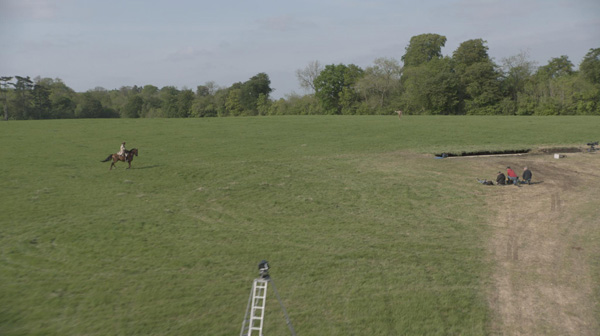 Back in pre-production, director Roger Michell had chosen to ask Adam to serve as 2nd unit director for both of these. Roger said, “I reckoned Adam had the expertise necessary and could really make the best judgement calls about speeds and the use of robotic arms, dummies, doubles and so on. He did a great job pulling all the various departments together and delivered a seamless sequence.”

Adam knew exactly what he needed in camera to make the final shots work. Taking on the role of 2nd unit DP and director allowed him to work very closely not only with Roger, to deliver an end result in line with his vision that told the story he wanted to tell, but also with camera, art department, stunts, SFX, costume and, of course, his colleagues at Union. The production mainly used ARRI Alexas on set, and Adam's second unit crew also shot quantities of texture and other reference with Canon still cameras.

To both create the necessary drama and make sure the composite of the animated collapse of the cliff and the live action stumbling horse blended together well in post, Adam worked directly with the stunt coordinator, meeting with him several times to insure the plan for the shoot days was foolproof as they only had a day to shoot each sequence. Adam said, “We planned the shoot so that the horse stumbled into a shallow ditch in the middle of a field. The hydraulic drop platform was remotely triggered to simulate the cliff falling away and cause the horse to falter in a safe, non-distressing way. 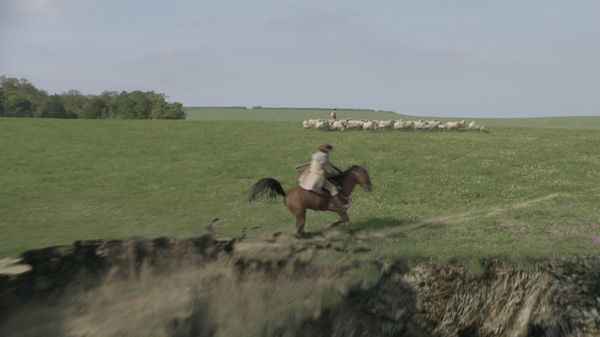 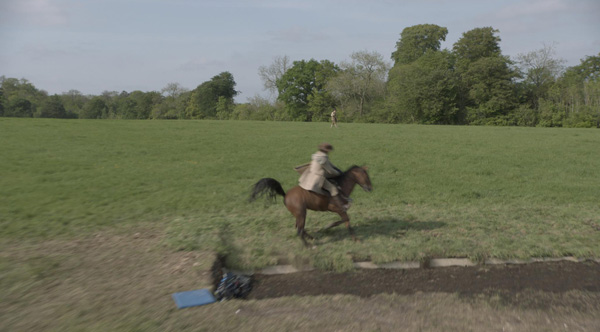 “We had to shoot the sequence from a drone to achieve the high angle that Roger envisaged for the shot. The timing was a bit tricky, but we succeeded in capturing the imagery our team needed to marry up shots from both drone shoots, plus the animation. We also handled a big sequence that portrayed Rachel’s fall from the cliff. Although unfortunately it didn’t make the final cut, it still had to be meticulously planned with the stunt and special effects teams."

At an intensely emotional point, Philip loses control and clasps at the pearl necklace around Rachel’s neck, breaking the thread and sending them cascading down a huge staircase. Real pearls were shot at high speed falling down the stairs, which were slowed down to act as reference for the team. Pearls were also shot falling underwater. The underwater sequence had a similar pace to the slow motion. They were able to use the reference as a plate and augment it with CG, adding more pearls and movement to create the final shot. 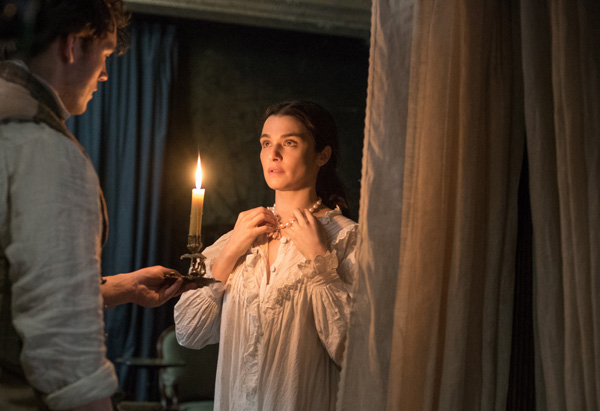 We also asked Adam about Roger Michell's remarks on the importance of restraint and integration in CGI work, and its role as a tool among other filmmaking tools. “No two projects are the same, but we approach them all with the goal of helping the director achieve his vision,” Adam reflected. “On projects where the wider creative team - director, art department, camera and costume - work well together, we get the best results. We are honest about what we think will give the best overall result for the particular project - even when that means less is more.” unionvfx.com