Nik Hill Paints and Animates 'Pictures in my Head'

Nik Hill Paints and Animates 'Pictures in my Head' 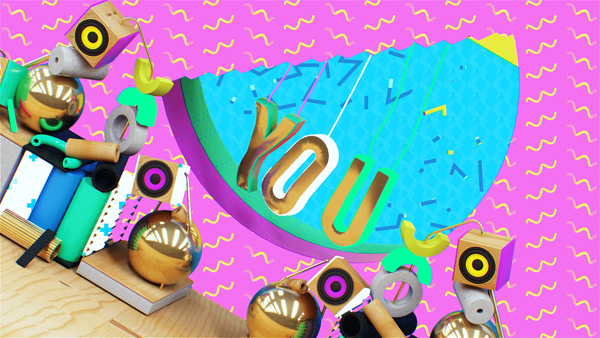 Director and motion designer Nik Hill visualised and created a 3D animated music video for the most recent single from DJ and producer MJ Cole, titled 'Pictures In My Head'.

This video is a treasure trove of interesting textures, looks and motion. All the action takes place inside a bedroom that lives within a girl's head, lit with familiar warm, bright interior lighting that viewers will recognise from rooms in their own homes. Objects spin gently in response to the music and other spinning, swaying objects, and some fall up instead of down. The song's theme is essentially romantic, offset by slightly jarring synthesiser tones that weave in and out, creating a disorienting musical effect that matches the inner musing of the lyrics.

Part of the brief MJ Cole passed on to Nik was his vision of the song representing “the dreams and imaginations of a girl wrapped in romance”. Here, Nik describes the process behind the project. “I was aiming to keep it dreamy,” he said. “A lot of the lyrics in the song are about love and sex, so I tried to play with those ideas, but do it in a way that wasn't crude. I like to hint at ideas by creating clever visual metaphors. Most important for me was to keep it fun and colourful.”

Developing the project was an evolution, beginning with a few sketches before moving quickly to designing in 3D in MAXON Cinema 4D, and then jumping to the timeline to set up a moving storyboard. “Working in 3D early on in the project allows you to add your 3D camera at the same time as other elements, so you can edit as you work with the camera in place to try your ideas from different angles, which saves time as well,” Nik noted.

That dreaminess relies not so much on looks as on the oddness that comes from seeing a collection of objects that, at least at first, seems a little mismatched and random but soon converges in your mind to create a distinct mood, thanks to the carefully designed and scaled animation, lights and camera. Gadgetry and geometry spring to life. The vibrant colours were chosen to match MJ Cole's existing art work and needed to have appeal for both male and female viewers.

“Sometimes a piece of music makes you see a certain thing, or a collection of things,” he said. “When listening to ‘Pictures In My Head’ it instantly triggered images of a colourful world made up of random visual metaphors. The more I dissected the lyrics of the track, the more it felt like it was all about the idea of love and the emotional experiences that go with it.”

Out on His Own

Nik is a freelance artist who ventured out on his own after spending four years as Art Director for Territory Studio in their London office, where he worked on screen graphics for movies such as 'Guardians of the Galaxy', 'Avengers: Age Of Ultron', and most recently 'Blade Runner 2049'.

Like many short form projects, the deadline for this music video was tight, which might have called for simplifying the concept, rendering the look in 2D instead of 3D, or limiting the visual detail, but Nik chose not to compromise in that way. “This job was about creativity,” he said. “I knew this was an opportunity to create a strong piece for the client and for myself as an artist. So, basically, all the decisions I made were based solely on the intention of making something great.” 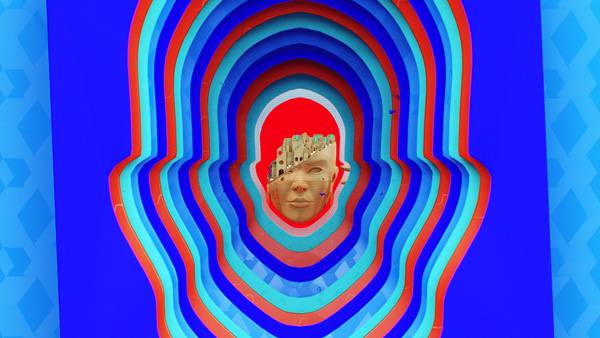 Although Nik often works on his own as a freelancer on various parts or stages of a larger project, he sometimes takes on whole projects like this one and, acting as the director, puts together a team of other freelancers drawn from different online sources. These range from the students following his Motion Graphics workshop on CG Society, people he meets through Slack channels, artists listed on Bēhance or from sharing tutorials. Through any of those routes he can see examples of their work, and go from there. Whether or not they live in London doesn't matter nearly as much as being right for the specific requirements of the project.

For 'Pictures in my Head' Adriana Mora in Mexico was responsible for creating many of the 3D environments, Lauren Galloway based in Toronto handled most of the 3D modelling, and Grace Barth in France led the 3D animation on the diamond sequences – see the details below. During the project they communicated and shared files using Slack and Dropbox.

“When you are leading a project, it's great to live inside a virtual community like this and have access to people with so many skills,” said Nik. “Adriana, for instance, was a natural for this project. We have never met before, but once we had discussed a few ideas, the work she sent back was not only very close to what I had in my mind, but she also added to it.” 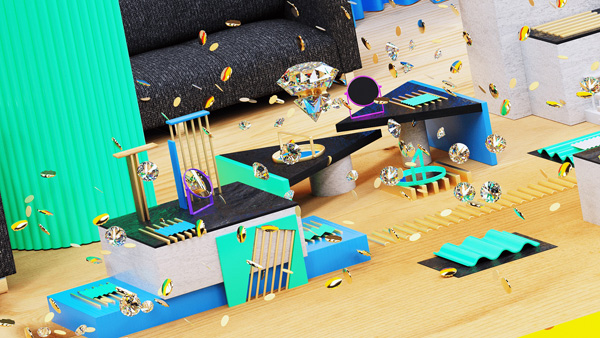 Nik has found that as director overseeing a team of artists working remotely it is important to allow a degree of experimentation so each artist feels they are bringing something special and of their own to the project instead of simply executing someone else's vision.

“By giving overall direction but leaving the details open to some interpretation, you might be surprised by what artists give you,” he said. “If you shut people down too soon, it's not fun for them. Artists want to feel they're adding value and expressing themselves through they’re work. I try to keep the brief quite broad in the beginning and trust my intuition about whether something is working or not. Then we can methodically work towards the final look together.”

The general workflow between the team members began with 3D modelling all the digital assets and assembling the scene primarily in Cinema4D. From there the assets were textured, lit and rendered using Octane Render and composited into the final sequence using Adobe After Effects. Nik also used Cinema4D to create design frames, geometric rigs and key-frames, generally keeping the animation minimal at that stage in order to focus on the flow of the edit overall. 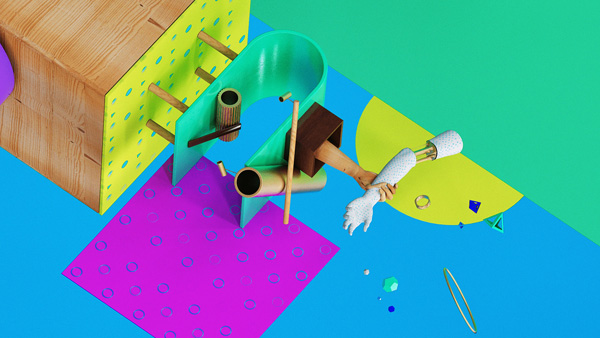 Cinema 4D is Nik's paint brush, which he values for its flexibility and expressiveness. He learned to use it while he was still at university, studying motion graphics. He prefers to use Cinema 4D for much of his work, more than some of the other 3D packages because the software design itself is visually oriented – as a visual artist, this kind of approach to accessing tools, setting up projects and so on, comes more naturally to him. It also lent itself to the MJ Cole project in certain ways, such as the ability to modify cloners with effectors to create some of the elements, and creating the feeling of random movement he was after.

Nik's textures come from many sources, including texture libraries and those he has collected from his work along the way. For accuracy, textures may also be mapped from photographs. He said, “I subscribe to the Poliigon library, but my favourite textures to use are ones supplied from one of Raphael Rau's free texture libraries.” Raphael Rau is the artist behind the Silverwing website.

One of the most memorable looks in the project is the glittering, multi-faceted diamond, diagonally sliced through the middle into two pieces tenuously held together by a stretchy gold material revealed inside. The animated interaction between the two materials is intriguing. The artist Grace Barth created an animated connection for them based on a borrowed script, involving some simple geometry and deformers.

“Grace came up with the stretchy, gooey idea for another scene, but it ended up suiting this one a lot better. She made an initial set-up and then, with the help of a plugin called Point Cluster designed by James Owen, we were able to tighten up the animation a lot more,” said Nik. 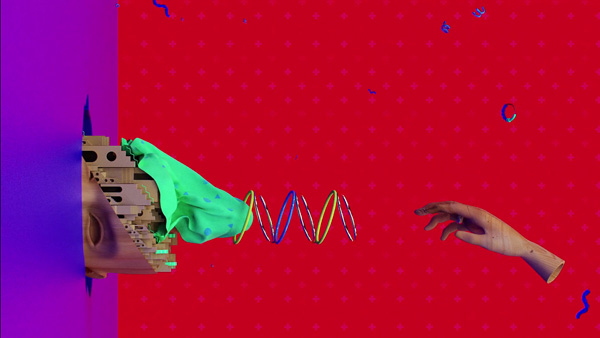 The light in the project is based on a HDRI – a 360° high dynamic range image from which he borrowed the lighting set-up for his bedroom set. Doing this still gives you a chance to tweak the lights for scale and position but lends realism and authenticity to the story. Nik placed reflections of ceiling lights in the metallic surface of a line of golden spheres, which not only looks realistic but also reminds the viewer of who is behind the camera – after all, the viewer shares the same camera looking into the scene.

Identifying with the camera also helps the viewer interpret the scale of the lights and the textures. The need to deliberately scale these key aspects of this project –  textures, lights and camera movement – to make this 'dream scene' work is another reason Octane was a good choice of renderer. It includes texture transformations combining scale, rotation, and translation.

The Octane renderer's underlying approach to materials, textures and light is based on real-world physics, ideal for a photoreal project. But it is also extremely fast, making very efficient use of the GPU in the computer it's installed on, and when the system includes multiple GPUs, the efficiency is maintained, allowing render speeds to increase accordingly. By using several GPUs he can control processing times quite accurately and has found that investing in the extra hardware soon pays for itself when managing processing. 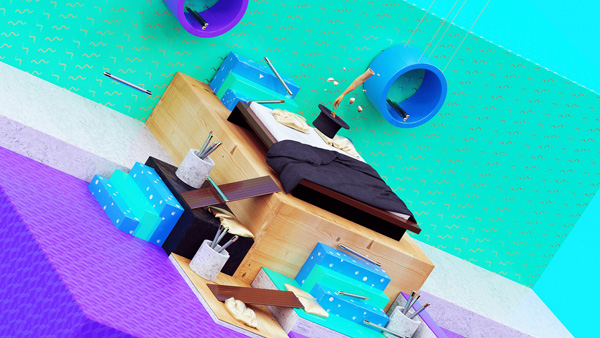 On this project, for example, render times were actually quite long. “For music videos, I usually aim to get the footage rendering at about 1 minute per frame,” Nik said. “As we're talking almost 5,000 frames here, even at 1 minute per frame that amounts to about 3.5 days straight of just rendering.

“Even achieving that target isn't always possible, though, especially if you're using refraction – for example, in the diamond scene - you need to make sure there are enough samples to clean up all the noise inside the areas that have a lot of refraction. More samples mean longer render times, of course, and I think that scene was pushing closer to 4 to 5 minutes per frame.”   www.nikill.com