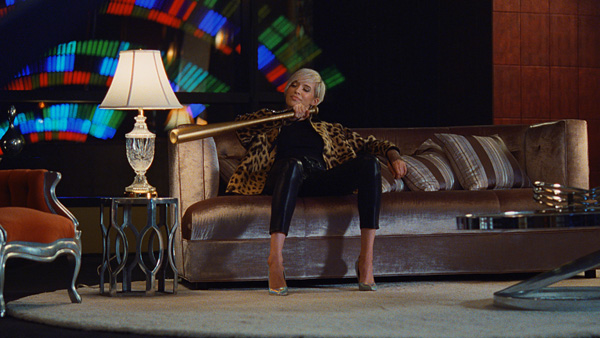 Palms Casino in Las Vegas has been undergoing a major renovation and upgrade. To share the news with the world, director Paul Hunter created a dramatic spot that helps the owners show off the transformation. The result is an intense, suspenseful film with cinematic looks in which the old hotel is physically destroyed to make way for the new, displaying ultimate destruction along the way.

At different locations around the building, a group of people participate in the destruction of the hotel in various ways while a soothing version of 'La Belle Vie' rolls out as the soundtrack.

MPC LA handled all VFX for the film, which was also graded at MPC by colourist Ricky Gausis and includes a raging fire that destroys the hotel kitchen, flying debris exploding in slow motion across the screen and a full-sized shark in the tank behind the bar.

Initially, the commercial was to use invisible effects to enhance the existing shots, but it quickly grew into a large-scale, visual effects-heavy film, aiming to create a spectacular feeling. MPC's job was to overcome practical hurdles by digitally creating looks that were impossible to achieve on set. Setting the kitchen on fire, for example, couldn't be done on site for safety reasons. They also placed a Rolls Royce into a large water tank in a piano bar, and made the famous illuminated letters of the Palms Casino logo spark and tumble down.

Looks were important to the director for this project. The video was beautifully shot by DP Linus Sandgren with intriguing camera angles and extreme characters that make viewers feel they are about to watch a Hollywood thriller. MPC not only focussed on major VFX shots, but paid close attention to the details to help make the beautiful imagery flow into one story. 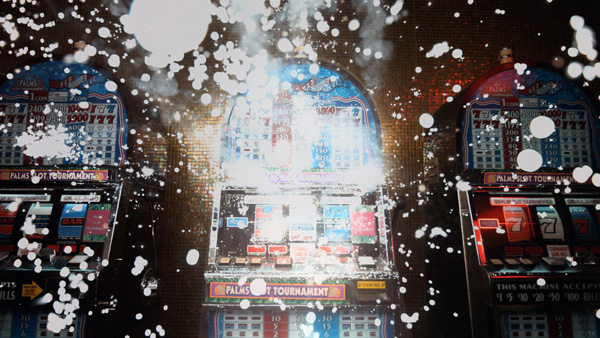 MPC’s VFX Supervisor Toya Drechsler talked to Digital Media World about some of the team's effects. “Collaboration with the production and agency AKQA started before the shoot, when we had the opportunity to give our input on creative decisions for the VFX-heavy shots. We attended the shoot and the editing sessions, and worked with the team through the production, communicating with AKQA to make sure we were achieving their vision, but helping them to push the look further as well," she said.

“For the Rolls Royce tank shots, the prop department built an actual size-accurate box on the piano bar set, which helped us determine the volume in the space. With that in place in the hero plate, we could create different concepts of what the inside of the tank could look like - a car submerged in an aquarium full of fish, or a car hanging mid-air or sawed in two - before we found our final look for the CG car placed inside.” 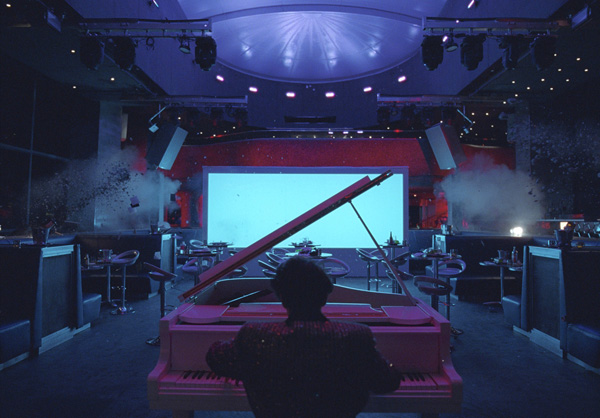 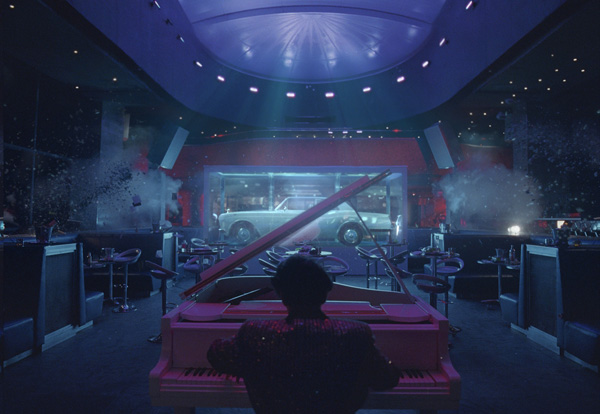 “We received key VFX shots first so that we could get started on them - including the car inside the tank, the fire in the kitchen and the sparking letter ‘P’ on the side of the building. We could work on the rest as the edit evolved, but these key shots had a look that needed establishing early.”

Explosions could be kept largely as shot, in fact. The team enhanced some sections like the blazing slot machines, beefing them up with extra sparks and smoke. Some shots, like the rows of shattering bottles in the Rolls Royce shot, involved timing adjustments, to which they added additional flying debris as the pianist plays his explosive chords.

After dousing the hotel kitchen with petrol, a fire-loving chef sets it ablaze by igniting a bottle of spirits and tossing it into the kitchen as he makes a hasty retreat. The bottle, already burning, was shot in camera on a spinning rig. MPC removed the rig, replaced the label and enhanced the flames to suit. The kitchen fire could also be set alight without CG, but required careful planning and process. 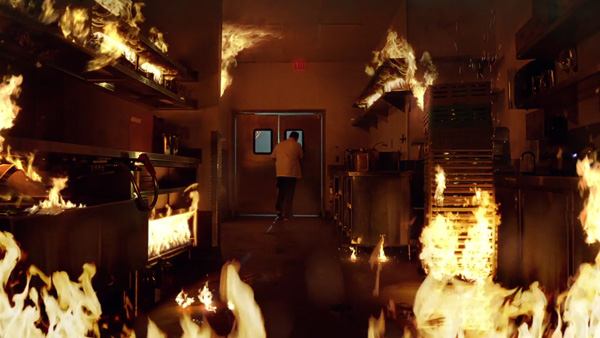 The different parts of a kitchen needed to be set on fire separately, to allow a cameraman to capture the flames. Then the fire elements could be composited with the interactive lights into the empty-plate kitchen footage all at once, to create one big fire. “The kitchen cabinets were custom built to set ablaze, allowing us to composite those specific elements into the scene in a way that makes the fire appear to really be interacting with certain parts of the room,” Toya said. “This was a special request we made to production. Interactive lighting was shot as well, but we needed to clean up some strong orange reflections that overwhelmed the set. We also added extra flames from our internal asset library.”

Shots of the PALMS signage were a special concern of the clients', although for the ‘P’ that suddenly falls away, it was never about making the sign bigger and bolder. “The fact that the film is about destroying everything overrode those concerns,” Toya reflected.

“The helicopter footage was captured specially for this project, shot to keep camera motion, and therefore parallax, to a minimum so that we could treat the ‘P’ as a 2D element and animate it in Nuke without any digital replacement. Even the sparks were existing elements from our library combined with some from a Nuke particle system. The ‘P’ falling into the water was all real, except that it wasn't built to scale, as those letters on the building are 10ft tall in reality.” 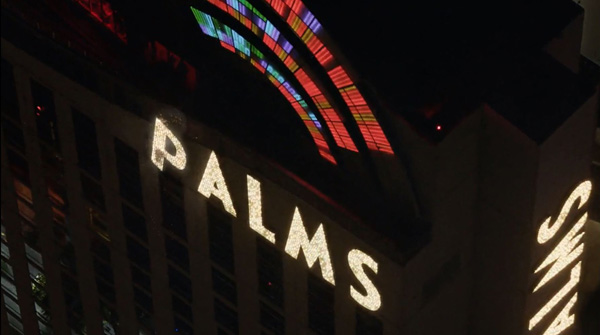 The commercial's final scene is unusual in an unexpected way. We see a shark, severed into three pieces, standing over the new bar, each piece floating in its own steel-and-glass tank. This shark is artist Damien Hirst’s 1999 sculpture 'The Unknown (Explored, Explained, Exploded)', which the Palm's owners bought and just recently unveiled as a main attraction of the casino's new Unknown Bar, which Hirst designed.

The shark tank was certainly real, but as it hadn’t been revealed at the time of filming, it had to be concealed from the public behind a curtain until the unveiling. Toya said, “We focused on getting the angle and perspective right in this shot. The casino environment was added in from a separate plate. What was critical here was getting the contrast right and the level of translucency, so that the viewer reads that it is water. We had to play around with the casino plate as well, to ensure it matched the camera move of the shark plate. 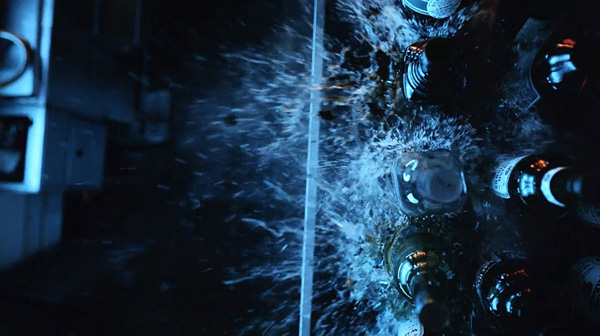 “This shot underwent many pre-shoot changes, trying to introduce more complex camera moves and a busier casino floor. But in the end, a balance was struck between what was achievable and what looked cool. The shark tank was surrounded by black curtains, so we had to ensure the casino floor plate could be composited in effectively and then minimize any potential reflection issues.”

Simplicity paid off. The camera moves for each plate could be matched without motion control was needed, and since the casino floor is largely background material, no special lighting had to be set up. A conscious decision was made to keep people and lights quite far away from where the tank would be to avoid reflection issues, and fortunately, both plates could be shot in the same environment, which was another bonus.  www.moving-picture.com