MPC LA Captures a World in a Raindrop for FIJI Water

MPC LA Captures a World in a Raindrop for FIJI Water 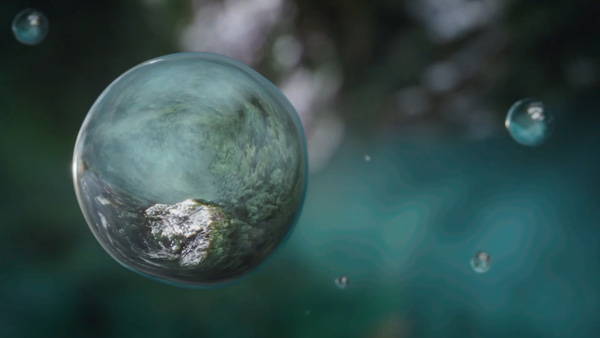 To launch the new FIJI Water Sports Cap bottle, the Wonderful Agency developed the creative concept of closely following a drop of rain that descends from the clouds high above Fiji. As it makes its way down through the pristine environment, the untouched source of the water is revealed. The story then transitions with the FIJI Sports Cap bottle in action as the athletes keep hydrated with the new bottle during a demanding workout.

To visualise that idea, Wonderful Agency worked with MPC, where VFX Creative Director Michael Gregory made his MPC directorial debut, directing both projects while simultaneously leading his team of VFX artists for the commercials, set to air on primetime television. Michael had joined the Los Angeles studio in March 2016, first as Head of 2D, after working for 13 years at MPC London where he had become a sought after VFX supervisor and lead artist. In early 2017, he was promoted to the role of VFX Creative Director at the LA studio.

Michael’s wide knowledge and skills in visual effects, combined with his creativity and distinctive perspective, made him an ideal director for the spots because it was essential to depict the raindrop’s fall as a fast-paced, unbroken journey through the different environments. He planned the production with care to allow as much control, flexibility and, especially in post, creativity to the artists and agency as possible. He mapped out the story in some detail, even before the shoot, but knew that they would need a huge variety of views captured at carefully chosen angles to give the right look and feel to each shot as the seconds of the spot ticked by. 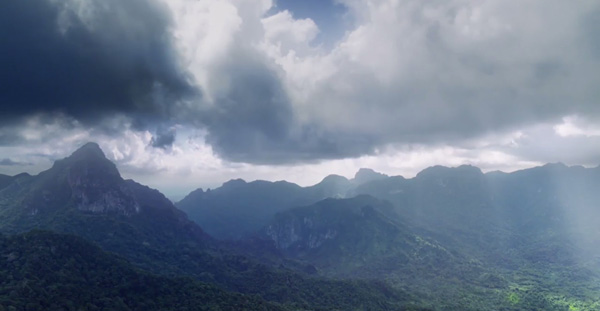 A drone was used for the aerial shots, and macro photography, captured prior to and during the shoot, was an important source of reference in order to understand how forest and rock textures would look through and around the raindrop. Michael said, “It was critical to film in low light, cloudy conditions in Fiji. We shot over five days in the most remote parts of the main island, taking the drone above the clouds and shooting many different angles on the descent, so we had all the textures and plates we needed.”

Michael had worked on projects using drone photography before, although on a smaller scale. He said, “I assumed we would be shooting this project on a RED or Alexa, but getting such a camera 2,000ft in the air and keeping it up there long enough was going to be a challenge. Flying Dragon, the drone cinematography company we worked with, recommended the DJI Zenmuse X7, a compact Super 35 drone camera that works with DJI's Inspire 2 drone. When I was a little worried that the image quality wasn’t going to be good enough, they shot some footage for me and sent it over. I was impressed.”

The Zenmuse X7 has a 24 MP CMOS sensor rated at 14 stops of dynamic range, which preserved all of the image information they needed in terms of colour and detail and could record the cloudy, low-light look they wanted over the forest. It also has an integrated aerial lens mount that switches between four prime lenses – 16mm, 24mm, 35mm and 50mm. All the components together – the X7 with lens in place, plus the drone - weighs only about 4kgs.

Once they had the plates, Michael and the MPC team worked with editorial on pacing and timing and selected the best shots that told the story of the descent. Lead Compositor Oliver Caiden then began to block out the shots centring on the hero raindrop, built in CG geometry, and essentially creating a post-vis edit. Though they made efforts to lock off the edit before starting in earnest on the composite, swapping out some of the plates for others with better angles or level of detail and so on was necessary along the way, and could be done without too much difficulty. 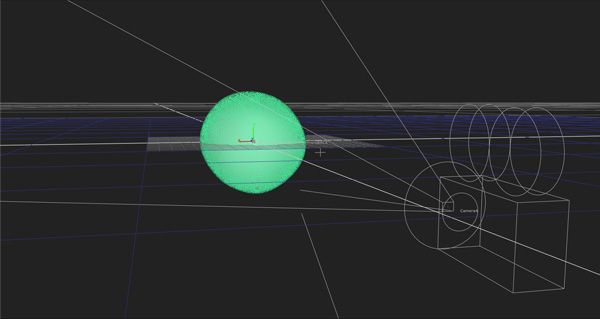 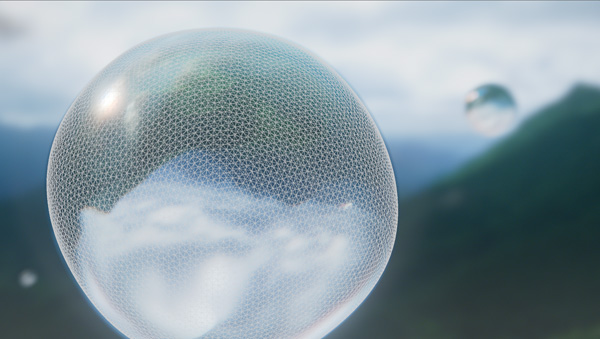 In post, Michael's background and familiarity with visual effects also meant he and the VFX team could work together and closely overlap every process. “I’ve been working with the artists for years, so we have a shorthand that makes it very simple,” he said. “For this project, the ability to be really efficient with artists' time was crucial for delivering on budget.

“For example the second shot ended up as a 100 percent digital shot, as I couldn’t get the shot I wanted on location. Josh Hatton, the CG lead, pre-vised it straight away and we dropped it into the edit. We had it approved by the client and then got to work creating it. So, overall, the complete commercial is a combination of digital matte painting, CG clouds, 2D and CG raindrops and plate photography. Art directed clouds in CG can be a big challenge, but luckily we had developed a cloud system in Houdini for a couple of jobs over the past year and we knew we could render clouds close to camera that looked exactly as we needed them to look.” 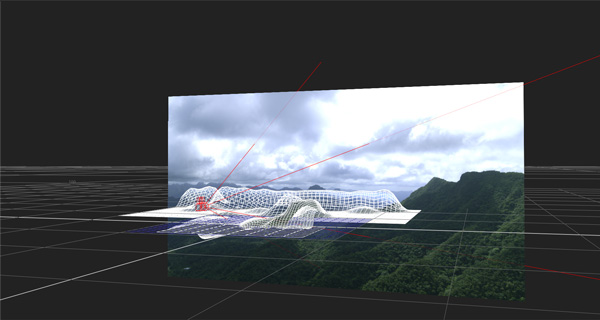 The water droplet of course had to be CG, going for realism. Although most viewers weren't likely to know exactly what following a raindrop from the clouds to the earth might look like, they do know instinctively what happens when we look at a scene through water and when the scene is reflected in the surface, especially a curved surface.

The raindrop's simulated CG geometry shows all of the different textures of the forest below, refracted through its UV map. A similar approach was applied to the droplet reflections, mapping high dynamic range skies from above onto the outside. This process meant they could achieve a more immersive result by pulling in details and interesting imagery from all around the drop. 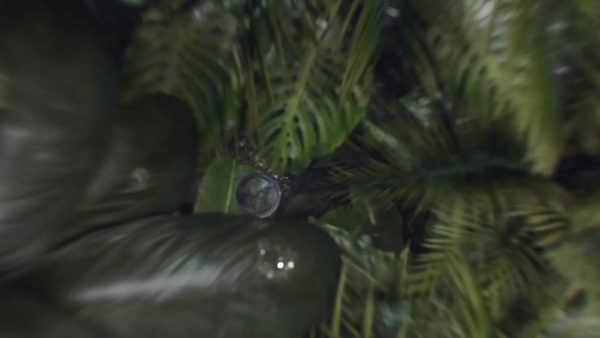 Once they had all of the elements together, much of the creativity of the project could be achieved in compositing, instead of relying too heavily on either matte paintings or CG builds. Their approach to the raindrop effects also made it possible for the compositors to animate the drops while keeping full control over motion blur, depth of focus, refraction and reflections, and make them as realistic as possible. Using Nuke's new tool Ray Render, Oliver could dial in the looks as required.

“Ray Render brings ray trace rendering capabilities to Nuke, and was a very effective way to create this type of effects at the compositing stage,” he said. “It allowed for much quicker iterations and meant we could try out many more versions without waiting for longer CG renders. We knew, for instance, that refraction flips an image and worked this into the shot design. Reflections were applied over the top, and atmospherics to match altitude and location were added.”

Distortion was created in Houdini. Applying straight turbulence gave a result that looked too much like jelly, but a dynamic simulation that portrayed the time-varying behaviour of the drop falling through space was more effective and realistic.  www.moving-picture.com 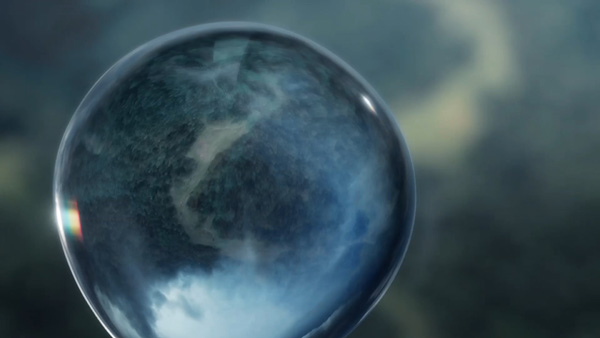