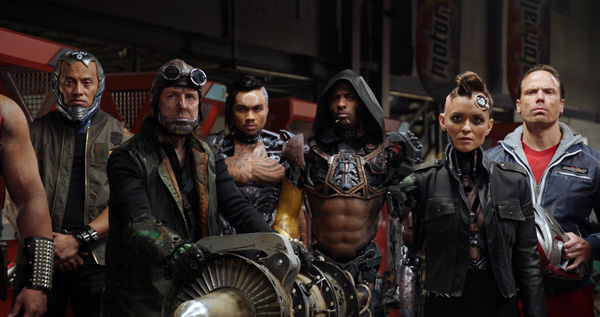 DNEG created over 250 VFX shots in eight sequences for ‘Alita: Battle Angel’, focussing mainly on the art of cyborg building and animation, and on detailed environment work that helps define Alita’s world, Iron City. Digital Media World had a chance to talk to VFX supervisor Raymond Chen about the team’s involvement and work on the movie.

Because the story includes so many complex characters and large scale environments, DNEG’s team entered the project fairly late in the production schedule, after principle photography was complete, to help out main vendor Weta Digital. Nevertheless, their work started in February 2018 and continued through the year to January 2019.

The sets were handled in different ways. The set for the pick-up game played out in the street, for example, represented the inner city neighbourhood where Alita lives with Ido, the scientist who rebuilt her. Raymond said, “The game sequence was shot on a physical set in Austin, Texas, built up to first and second floor level to create roughly two city blocks. It was bounded by blue screens that we replaced with more run-down buildings and detail to match and fill out the practical set, extending the height and length of the streets to depict a diverse, dense, crowded urban scene.”

The characters DNEG was working on included members of a group of complex cyborgs called the Factory Gang who engage in a violent bar fight, plus background characters in several sequences – most inhabitants of Iron City have had body parts replaced with machinery - that Weta Digital had started on. The Factory Gang in particular needed ‘street-look’ refinements to more closely match the concept art, which was inspired by the original Manga series titled ‘Battle Angel Alita’ (‘Ganmu’ in Japanese) by Yukito Kishiro. 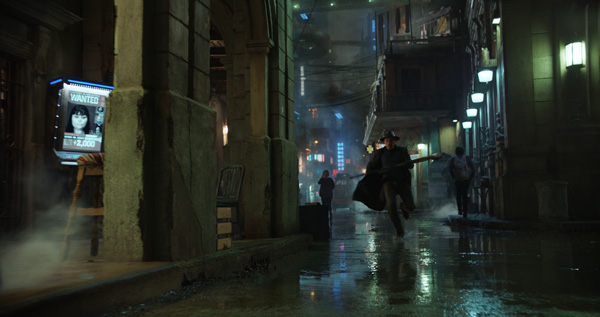 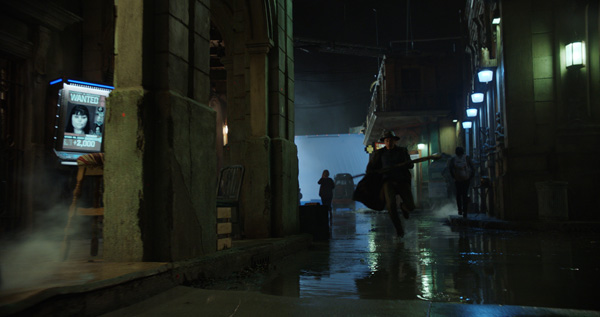 The cyborgs' animation was a combination of keyframing plus motion capture data – the actors and, in the case of the pick-up game, stunt actors gave great performances that the artists aimed to preserve as far as they could.

Factory Gang – Inside Out

The approach was not purely a process of adding CG mechanical parts to live action footage of an actor. The actors were often wearing elaborate set pieces that DNEG needed to largely recreate and then refine and integrate invisibly into the actor’s body as well as into the whole scene. Underneath, they were also wearing motion capture suits recording their actions. This meant that most of each body had to be replaced with realistic human limbs that were then augmented with machinery. 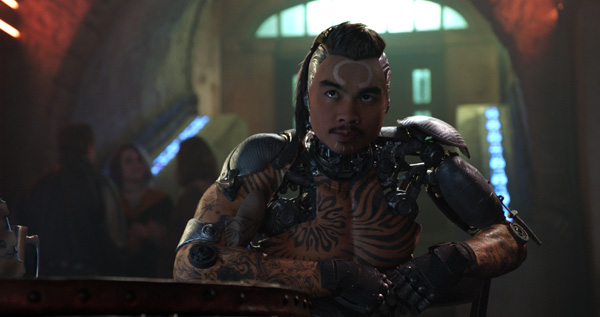 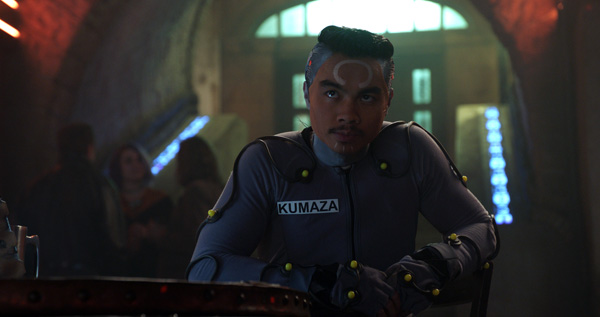 An example like Kumaza (see images above) required replacing his suit with an incomplete, damaged body, reinforced and bolted together with his robotic parts. Large gaps around the joints revealed portions of the set behind him that the artists restored in the images. “Each character had a different sort of augmentation and had to be approached and re-constructed differently. Screwhead and Gangsta had significant parts added to their heads that needed attention to detail. The spectators standing round the pick-up game had still other augmentations,” said Raymond.

“In the end, what you see of the film’s characters is a composition of a lot more digital elements than you might expect. Doing it this way also allowed the animation to be more coherent than trying to add CG parts to a performance and animate them separately. Also, because the performance was captured, we could make the results convincing even when we decided to replace most of the character.” 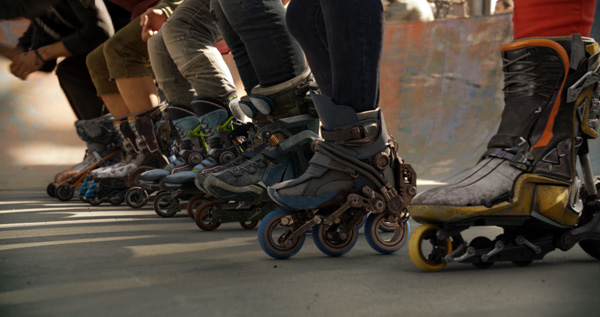 The skates players wear in the pick-up game sequence were a different type of augmentation. The artists went through a 3D prototyping stage, inventing customised skates. He said, “Their motion was meant to imply that they were self-propelled but in practise they needed to match the performance – like the other body parts. This scene also involved some 2D and 3D face and head replacements, due the use of stunt actors to perform competitive skating moves.”

Working with Weta Digital, who had responsibility of the star Alita asset as well as her massive, powerful cyborg adversary Grewishka, among many others – was an essential part of DNEG’s work on the project because they shared so many shots. For the barroom sequence, because Alita fights DNEG’s characters, the teams needed to exchange data upfront, trading geometry in order to create the correct shadows and reflections in the set. 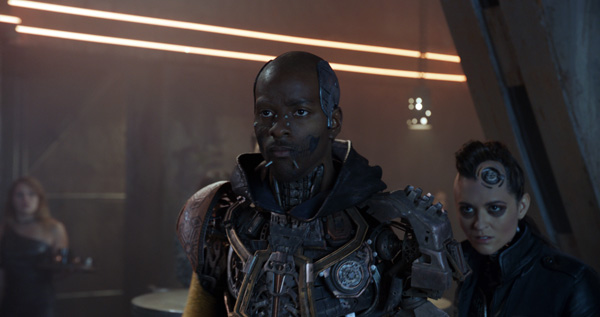 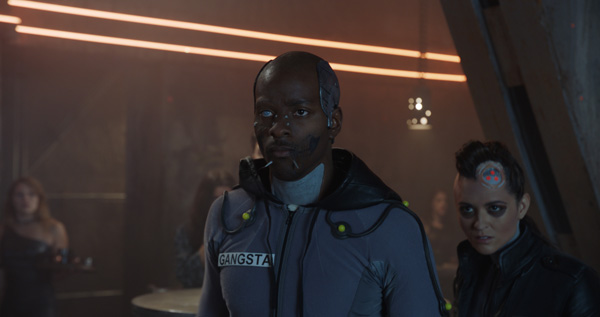 The wild bar scene took up about half of DNEG’s total shots. The fight reaches a point when Grewishka punches a series of holes in the floor which causes a massive collapse and the bar room contents and occupants crash down into the level below. The set hadn’t been dressed with any breakage except for a few planks. All destruction was based on DNEG’s rigid body simulations, with Nuke particles.

Therefore some shots had to be full CG – recreating and destroying the whole set. Shots needed to be shared with Weta throughout because of the presence of giant Grewishka in most shots - DNEG’s simulations affected Weta’s animations. Weta had built the underground level earlier, leaving the main bar floor to DNEG, which was useful because most of the character work was there. They achieved this closely shared, interwoven set of assets and animations entirely remotely without any face to face discussions or handovers.

If the barroom sequence was DNEG’s largest, another sequence involving a violent cyborg named Amok was their most challenging and supplied an important backstory for the movie. Many years before Ido found Alita, Amok broke into his laboratory looking for drugs and ended up killing his crippled daughter. Ido had been building a robotic body for her that she never had a chance to use - the same body he gives Alita. As the sequence is a flashback to a past event, the shots were not shared. 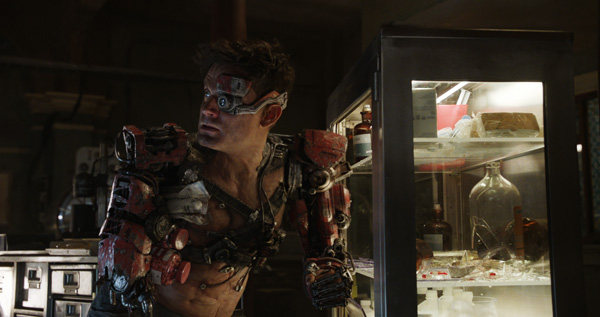 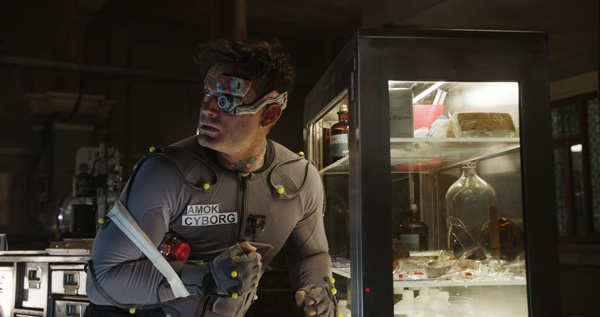 Amok is a large, highly complex, detailed character that Weta had not progressed from its base asset. “DNEG was responsible for the look development, some of the design and texturing, which reveals heavy weathering and chipped paint over his mechanical parts. These parts involved a complicated head and eyepiece that the actor wore in-camera along with a motion capture suit,” said Raymond. “We also designed and created an intricate mechanical iris to replace the practical one and paid extra attention to digitally re-building the trousers in order to maintain the style of the actor’s performance and make him powerful and dangerous.”

DNEG really enjoyed working on this project, collaborating with Weta and working through the sequences shot by shot to make every character look unique within the scene.    www.dneg.com