The team at Framestore delivered environments, racing cars and effects for a new spot for LEGO titled ‘Drive What You Love’ that follows a LEGO builder’s imagination, taking off on a high speed race through the house.

The nature of this commercial meant that Framestore needed to contribute to the project from pre-production, mainly because the director David Mellor used a camera that invisibly shifts back and forth from the point of view of a normal sized human, to the view of a driver who can fit into a LEGO auto.

Vincent Aupetit, creative director and senior supervisor of Framestore’s new pre-production team, helped the artists previs the entire commercial and plan how the shots would be integrated with the VFX. Then they carefully supervised the live action shoot before moving on to post.

The VFX work included some entirely CG environments and cars, digi-doubles of drivers, associated animation and effects, and a huge explosion of flour in the kitchen. A fun task was taking the miniature LEGO City GT car and realising it as a ‘real’, life-sized racer. Some effects, such as the lighting and reflections seen in nearly every shot of the advert, are quite subtle but add a burst of realism that makes viewers feel completely engaged with the project.

VFX supervisor Charlie Bayliss said, ‘Like the subject we were working with, we built the different elements brick by brick in order to execute all the different parts of this commercial.’ Planning was essential to keep the technical elements under control.

Director David Mellor started out as a visual effects TD at Framestore himself, and wanted to select the location, a family house, early in production in order to plan proactively for the VFX. This allowed the team to scan the actual house that would later be shot, rebuild the environment as digital assets, and use them throughout the previs process. Approaching the project this way also helped the client ‘see’ the film before it was shot and, by working with the DP Jordan Buck, they could plan the shoot in detail and make decisions about what would be captured on location.

On Location and in the Studio

At the shoot, Charlie focussed on capturing detailed data scans and photogrammetry passes of the location the team would need to exactly replicate the set in a large enough scale for the all-CG shots, encompassing cars, environments and drivers. These shots were important when it was physically impossible for the real camera to fit in and move as required to get the right perspective and achieve the director’s vision. Accurate lighting references were also collected for working environment rebuilds to add reflections onto the cars, helping to integrate them into the plates.

He said, “The live action shoot for the commercial was split across two days – one shooting the actors in the cars in a blacked out studio the other on location in the house. At the house, we set it up like any other shoot, using a camera running as close as possible to the floor to get the correct perspective for the cars. We shot as much as we could, having already identified what angles and camera moves would need to be finessed in post-production wherever the size of our camera rig prevented us from actually doing them.

“Then we had a day in a studio with three cars to shoot with the drivers behind the wheel. The cars were stationary and lit to look as beautiful as possible so that we could use these live action rushes for the through-the-window live action elements, and then again as references for how the cars looked best for our lighting. While on set, we also did a 360 degree photomap of each driver sitting on an apple box in costume, using a makeshift white box, to get the photogrammetry data for the digi-double builds.”

Charlie and crew used a Canon 1DX Mark II with an 11-24mm lens for the photogrammetry. The camera has a great burst / continuous shooting mode, allowing them to capture all necessary details of their subjects. This camera was attached to a little roller rig which Charlie pulled on a shoe-string – literally – through the set locations to map abundant super-sharp, wide angle images in sequence. “I did feel a little like a child pulling a toy on a string and it looked a bit hokey on the day, but it got the job done really well for what we needed,” he said.

The same camera and lens were used for the digi-double and car photogrammetry on set on the studio day, with a Lidar scanner to record exact data for colours and dimensions of the environment which were translated to the 3D meshes and subsequent fine tuning of the CG version of the house location.

As well as compositing live action shots of the McLaren and Ferrari F8 into the live action or CG environments, Framestore’s team meticulously rebuilt the all cars in CG along with all their LEGO counterparts.

These assets were used in the all-digital shots and for any shots when the cars are tearing around at speed, underneath dining room chairs or across counter tops. That meant that almost every shot of the cars’ exteriors are fully CG. “The cars – and their drivers – shift multiple times between live-action and CG digi-doubles. It’s a testament to our team’s work that it’s almost impossible to spot the difference between them,” Charlie said.

The CG rebuild of the location precisely matched the measurements and were detailed enough to project imagery onto without making the asset overly heavy. Their Lidar scans and photogrammetry sessions gave them really in-depth scale, model, lighting and texture information to work with as they built the cars. They were even able to use these images to remap the texture and lighting information on to the set geometry in lighting.

Charlie said, “The studio shoots with the cars made very useful references for beauty lighting and reflections that really showed off the cars in their best light. So we used the live action as a guide and added the environmental lighting on top of that reference to give us the correct reflections as the cars passed through the different house environments.”

Scale was one of the most important factors for realism and an immersive experience for the audience. “It was really important to make sure the environments were created at the right size and scale so that there wasn’t any discrepancy in how the cars looked from one shot to the next if changing from live action to CG location. For instance the floor textures and worktops had to represent the real world but at a kid’s eye macro-view of a car chase,” said Charlie.

“We considered all cars in the commercial – both LEGO and real-life – to be the size of an actual car. That meant we then had to think of the environment as 300x the size. Had we done it the other way and ‘shrunk the cars’ instead of ‘blowing up’ the environment, the measurements in CG would have been a lot trickier to work with.”

Related to scale, of course, was speed. Plotting out the speed had initially been done in the previs but, typical of racing, the speed will always vary depending on how or where a car is driving. Once they had the plates and saw how each shot’s composition looked, a few changes were needed. But, since all cars in the commercial were CG, it was quite easy to speed them up or slow them down to achieve continuity. Similarly, some shots just needed the car speeds tweaked to achieve the required framing and creative effect.

One of the stars of the commercial is the City GT car. As it was Framestore’s job to realise the design and to model both a ‘real-life’ and a LEGO version of it, the director sketched out the initial design, followed by a series of references and a collaborative concept process. Charlie remarked, “The real-life version of this car was tougher to build, without a doubt. The LEGO version exists but the team had to interpret the life-size one as a realistic, believable car – as did the real-world driver. 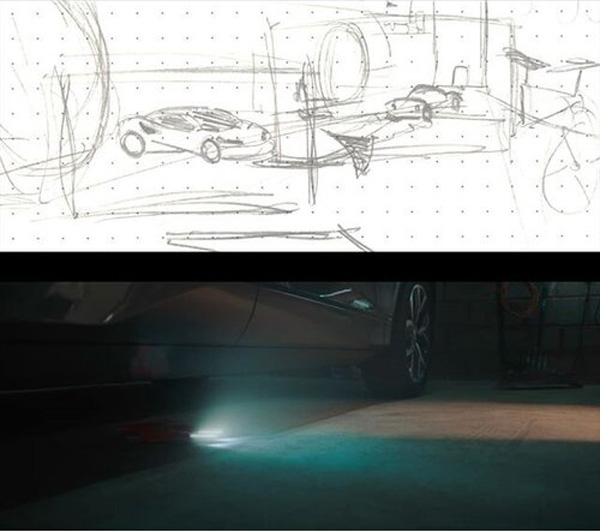 “We did hear from the client-side that the designers of those LEGO sets were really excited to see their creations realised as real-world cars.” We finally see it burst into life revving its engine and speed out of the bread bin, creating a massive dust-cloud of flour on the kitchen counter.

This particular flour-cloud effect took a lot of research to find the right look for the particles and powder, and to determine how it would appear as part of the commercial’s life-size world. The correct look was found in footage from the 2019 Dakar Rally where drivers raced across the red mud flats of Peru’s Arequipa region. The team took references and recreated the look with white powder, producing the photoreal explosion of flour.

“It’s always the case with a lot of effects of this kind, where it’s a combination of techniques layered together that give the desired look. This one included 3D particles and fluid simulations as well as fluid simulations coming out of particles, some of which started emitting from the cars and some on the worktops to get the right spread. So it’s a real mixture of techniques," Charlie said.

“The real challenge was making it obvious that it was flour, just seen at a different scale. If the scale of the house we were in had to be 300x bigger than it was in reality, so did the scale of flour. That’s why the Dakar rally was a good scale and movement reference.”

LEGO versions of all of the other cars were also created for the fans for Easter egg moments, throughout the ad and for the final sequence, where the LEGO builder’s imagination and reality collide. For that final shot, in which all the cars race in a jostling formation underneath kitchen stools, the team created everything in CG due to the impossibility of filming a location at such scale.

In just a few moments, the CG cars morph and warp into their LEGO counterparts and assemble themselves in a winning packshot. “We started thinking about it as if the cars were going to glitch as they hit pools of light, like the dead pirates from ‘Pirates of the Caribbean: The Curse of the Black Pearl’,” Charlie said. “We referenced similar looks like the phasing effects in ‘Ant-Man and The Wasp’ or the Predator’s cloaking device and ended up with something quite subtle. It also had to be quick, given the limited amount of time to read it on such a fast moving dynamic shot.

“Then we worked through it by section, that is, front bumper, cockpit, front left wing, front right wing and so on. We rendered each of these pieces separately with lots of custom utility passes and ended up with this transforming effect which was made up in compositing with a few different elements.  www.framestore.com