Mavericks VFX Tells ‘The Handmaid’s Tale’ with Fire and Destruction 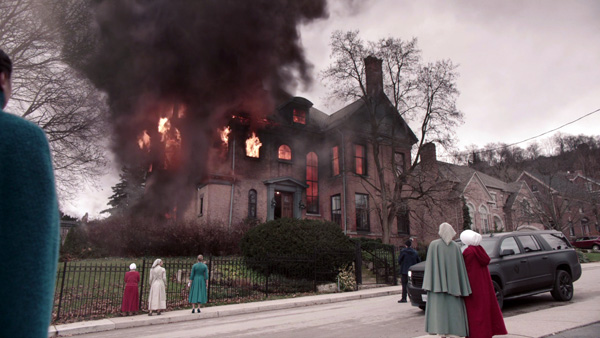 After their Emmy-nominated work for Season 2 of ‘The Handmaid’s Tale’, Mavericks VFX created vivid scenes of destruction at legendary locations in Washington DC for Season 3 that have earned the team another Emmy nomination in 2020.

In this series, the show’s main character June and the Handmaids are brought to Washington where they witness the transformation of the city, including the destruction of its many national monuments. The production went to the actual location for the shoot, and the team at Mavericks VFX took the role of turning the Washington Monument into a Gilead cross, destroying the Lincoln statue, led by VFX Supervisors Brendan Taylor and Leo Bovell.

The destruction they depicted across the environment wasn’t intended feel complete. The production wanted clear remnants of the locations to exist, as people are used to seeing them. Mavericks had the opportunity to make suggestions on how this, and other sequences they worked on, should look and to iterate through some of their own ideas. 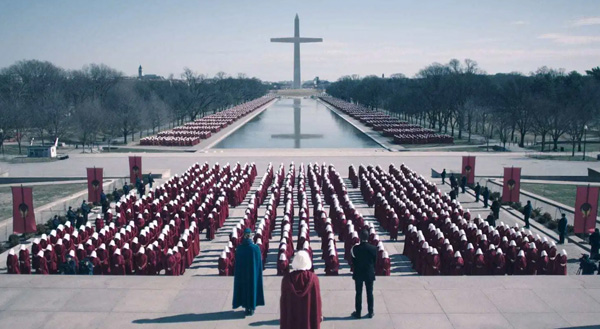 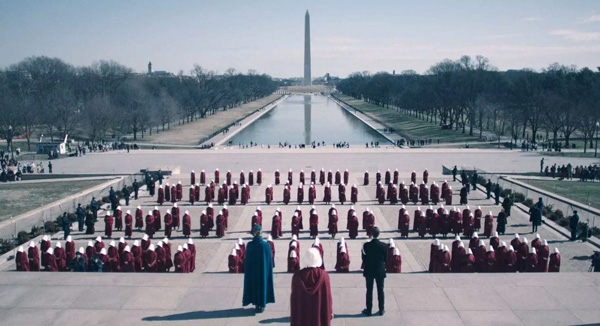 Only a small crew was supervising on the set in Washington DC because the US government was still undergoing a shutdown that occurred at the time of the shoot, earlier in 2019 – only five people could work on set at a time, and no tripods were permitted.

Nevertheless, the on-set supervisors had a chance to experience the conditions and nature of the site, and talk over the production’s intentions as the shoot proceeded. The team was charged with adding a large crowd of identically dressed Handmaids to the plates, shot directly in front of the Lincoln Memorial and down the National Mall, in regimented rows. The day was dull and slightly overcast with a light wind, which suited the tension of the story but meant the team had to take measures in post to bring the scene to life.

Brendan said, “Because there were no element shoots with talent or opportunities to capture all the angles and poses we wanted, our team built all of the agents in 3D, and then created a dozen or so different animations.” Houdini was used to generate the crowd, which allowed the animation clips to be associated with agents, and the agents to be distributed across the scene in a geometry network matching the requirements of the shots. 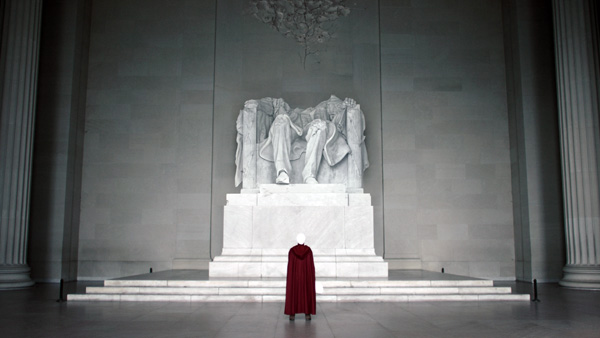 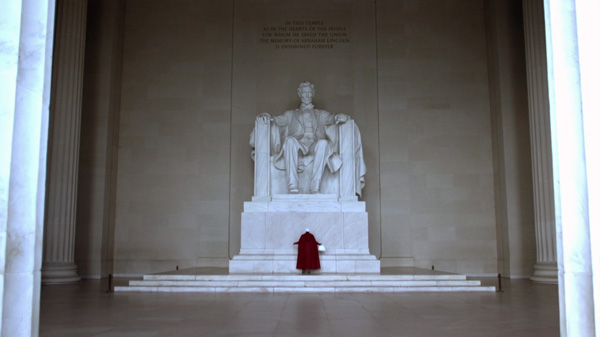 “The even light over the set clearly revealed all elements in the frame – digital and live action – and added to the challenge of making the crowd look realistic and believable,” he said. “It was important to create variations among the agents with actions like turning their heads to add randomness to the scene. The Art Department gave us details of their costume design so we could show the cloth blowing in the wind.” Historic sites as well-known as the Washington Monument, Lincoln Memorial and Reflecting Pool also attract many visitors, which meant a lot of clean-up for Mavericks’ team.

As viewers look down the National Mall over June’s shoulder, they see the Washington Monument obelisk, which the team rebuilt in 3D as a giant cross of Gilead and reflected in the Reflecting Pool. The effect is positioned in the distant background of the shot, but the result is effective. 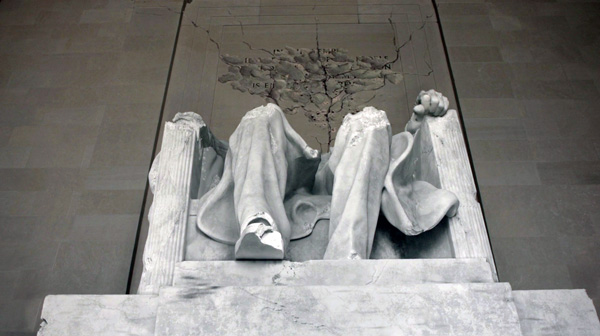 In the story, June walks into the Lincoln Memorial, which has been partially smashed. The team was supplied with extensive photography of the monument to base the destruction work on and decided that, to make their damaged asset look realistic, they would need to rebuild the damaged elements first. This meant having exact dimensions to work from. The National Parks Service was able to supply a 3D scan, but when they found it wasn’t entirely accurate and consistent, they ended up rebuilding the entire structure.

“We researched the distinctive look of the marble the Memorial is built from, noting that the look changes changes between its broken and polished states, and built a specific shader in Maya to visualise how light reacts to the material for each of the looks,” said Brendan.

At one point in the series, one of the characters sets fire to her large, suburban house. The interior shots in which she and June are standing were captured on a set that was set on fire according the story. As the actors couldn’t be present, they were shot with interactive light and inserted into the plates later in post. 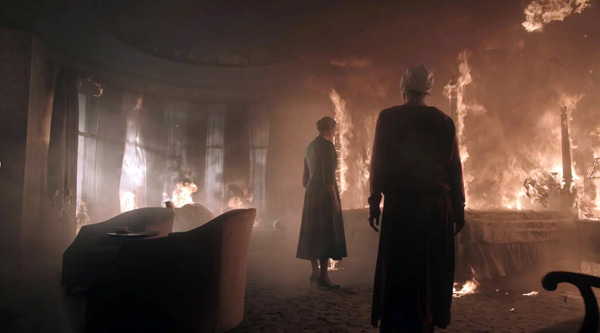 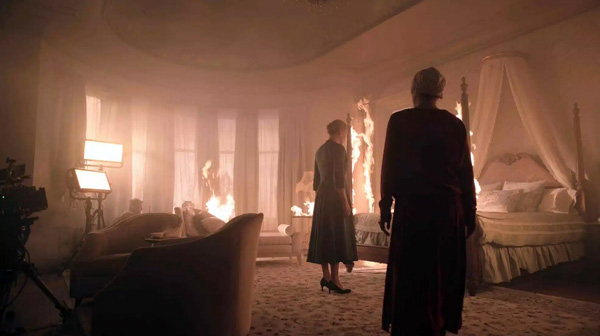 For the exteriors [see image at the top], Mavericks was called on to create more complex composites. “The production actually burned a house – with a fire engine on hand – and filmed it from multiple angles,” Brendan said. “When the house was fully burning, we could see exactly how the critical details should look to be able to build the scene with a lot of realism. For example, as the characters watch the fire from outside, we wanted the audience to feel they were standing with them and could see through the flaming windows into the burning rooms of the house – not just see fire at the windows.

“It also gave us fire and destruction elements that worked well with the house in the plates. The whole sequence was storyboarded, and we helped decide where the cameras should go to capture the most useful views of the fire. Really burning the house also gave us the smoke on both the interior and exterior sets to work with, getting reference and then adding CG smoke for storytelling points. We mainly wanted to capture as much as possible, as we could never come back, of course.” 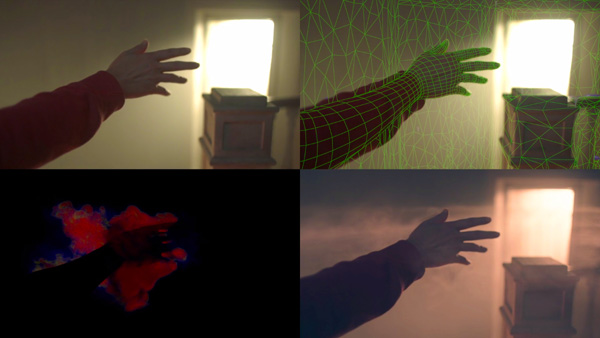 The team built 3D geometry from the live action footage of the character’s arm in the shot, and then used the geometry to guide the motion of their digital smoke, and the colour and transparency channels that create the look in the render.

One of the nicest shots [See the images below] from the sequence is an overhead view of the burnt house, for which Mavericks produced some initial concepts. To create it, they put together an aerial shot of the same location where the sequence was filmed, and rebuilt the house in 3D so that they could destroy it by adding fire damage elements. The shot environment was then augmented with 2D elements that Mavericks supplied, and with 3D smoke and water spray from the fire trucks.  mavericks-vfx.com 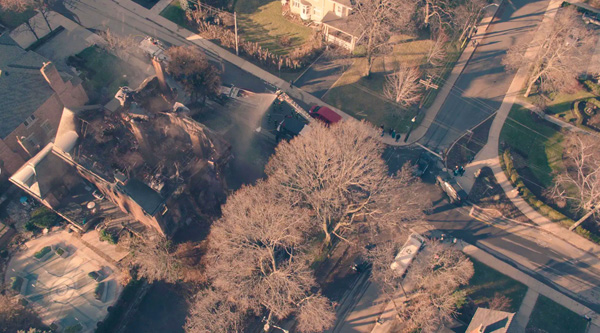 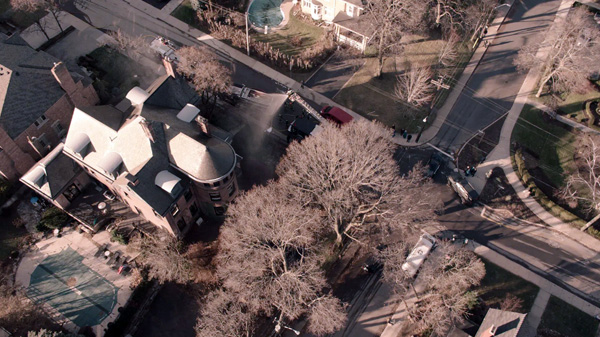