Union VFX Launches the Sea Dragon ‘For All Mankind’ 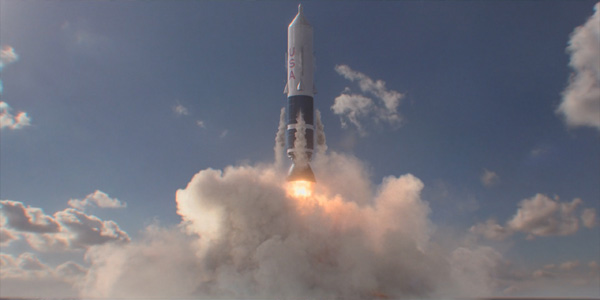 Union VFX were approached to create the season finale for the Apple TV+ dystopian drama ‘For All Mankind’. The series dramatises an alternate history for the 1960s in which the Russians achieved the first successful manned landing on the moon, ahead of the Americans.

The season concludes with the televised launch of a Sea Dragon rocket. The Sea Dragon was an immense, sea-launched, two-stage vehicle designed in real life by US rocket engineer Robert Truax for Aerojet in 1962. Although it was never built, at 150m long with a diameter of 23m, Sea Dragon would have been the largest rocket ever built. Even today, it’s still the largest rocket that has ever been fully conceived.

The season’s VFX Supervisor Jay Redd supplied Union with some initial previs of the launch which acted as a comprehensive brief in terms of model placement, timing and camera angles. “After a few more rounds of previs we locked down our transition from viewers watching the launch broadcast live on TV through their set to a crystal clear, full-width shot of the launch,” said Simon Hughes, VFX Supervisor at Union VFX.

Final delivery was a 4K, 2,544 frame single shot of a rocket launch from under the ocean surface, an ambitious effort considering the required interaction of water, white water, foam, pyro effects and smoke. From greenlight to delivery, the shot took 13 weeks to complete. The edit was still in flux when work commenced and, at the 8-week point, they were asked to extend the shot by an extra five seconds. Working with Simon was FX artist Marcelo Sousa, 2D lead Tiago Fara and Matt Moult, 3D artist. Jan Guilfoyle was VFX Producer.

“We had a pretty good reference for the rocket build, given that the blueprints for the original design are accessible,” Matt said. “However, in consultation with our clients, some artistic license was employed to help the rocket to fully realise its epic, on-screen potential. Working in Houdini, conveying the sheer scale of it through modelling and texturing detail was challenging. It was particularly tricky given that much of the structure is not much more than a large white cylinder with very little relatable detail to convey its scale.

“Initially, we tried to deal with the rocket mostly as one large object, but then found that breaking it into distinctly separate pieces and constantly referencing a human figure made it a little easier to convey the sense of scale. Texturing for ‘the wet look’ also required a lot of testing to refine the shaders so they appeared ‘wet’ in the most believable way. Alongside, we added familiar elements like buoys, seagulls, a boat and two helicopters to give the scene realism as well as scale.”

Voxels, Renders and the Cloud

Finding appropriate reference for the look of the water in motion and the interactions took some dedicated searching, as no one has ever launched a rocket from under the ocean. Marcelo said, “The closest reference we could find was missiles being fired underwater from submarines. However, an incredible number of land-based rocket launches are available as reference. The scale of our rocket and unique launching mechanism meant we had to employ some creative license and try to merge all these examples together into something that felt right.”

Owing to the magnitude of the simulations and renders, they decided to access compute power on the AWS cloud for the capacity needed to deliver the work within the project time frame. “Our largest sim, the rocket plume, took eight days to simulate on systems comprising 96x CPUs and upwards of 768GB RAM -- generating roughly 4 billion voxels. All of them were created in Houdini,” Simon said. “Apart from a small proof of concept, this was Union’s first project using the cloud. Ordinarily, the capacity we needed for this project would have been well out of reach of a studio of our size.”

Throughout the render and sim processing stage, the teams were constantly communicating back and forth about the order of priority. They needed to allow compositing enough time to develop the shot, as well as the FX team enough time to run the simulations correctly and render to a high standard. Also, because work on some of the sims depended on how others turned out first, they needed to look at them in order, to tweak and refine them.

As soon as they had the first renders, they could start building the shot in Nuke. The CG elements consisted of the rocket, helicopters, buoys, water, waves, pyro thrusters, engine plume, atmospherics and smoke. The length of the shot and the interactions between the various elements over time called for multiple simulations and renders for each one.

The spectacular water-rocket explosion interactions brought with them the same scale issues when it came to finding reference. “For the interactions, a really big part of it is the motion the elements,” said Marcelo. “We had already calculated our water sims and their velocities, which we used on all the smoke simulations so that everything interacts and behaves as it should. To build the effect of the explosions on the water into the simulations, an initial smoke sim came from the rocket nozzle and up to the surface with a buoyancy force, and we used those velocities to affect the water.

“When rendering, we looked at rocket launches, the way light sources interact with water, and more. We had all of the elements in CG, so once the lighting and shaders had been dialled in, we could let all those expensive interactions be calculated by the machines at render time while ensuring that comp still had everything they needed to bring it to life.”

Digital matte painting techniques were used to create the sky and the USS Enterprise battleship in the deep background. In comp, a layer of additional crashing wave elements was added to supplement the FX water as the rocket emerges from the sea and the engines ignite. 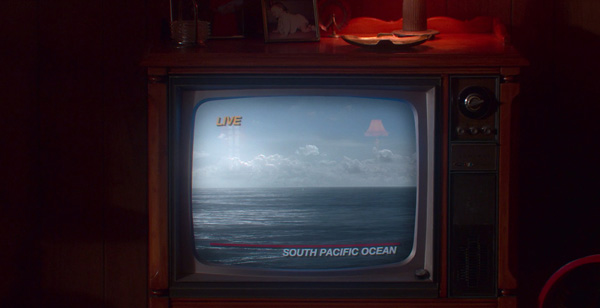 “A fair bit of work was involved to give the transition from the living room plate to the sea the right look. We built the living room in 2.5D, taking parallax from the walls, and created a camera to push in and transition smoothly for the full CG takeover,” said Simon. “We also added the TV screen look, which we had to create from period reference because it needed to stand up to the viewer travelling through the pixels.”