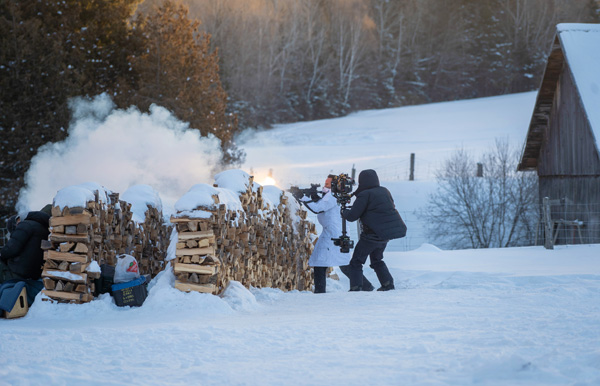 Cinematographer Johnny Derango has recently shot a new film called ‘FATMAN’ for directors Eshom and Ian Nelms, a black comedy that portrays the dark side of being Santa Claus in today’s cynical world. This is the fourth film Johnny has shot for the Nelms, following ‘Small Town Crime’, ‘Waffle Street’ and ‘Lost On Purpose’. In 2018, these and other films, television productions, shorts and his commercial work earned him a place on American Cinematographer’s annual list of 12 cinematographers to watch.

The story follows Chris Cringle, known to the world as Santa Claus, and his wife as he attempts to save his declining business but, ultimately, is forced into a partnership with the US Military. Even more challenging, after receiving a lump of coal in his stocking, a 12-year old boy named Billy Wenan hires a hitman called Skinnyman to take Santa out.

“On earlier projects, the Nelms had been very specific on what they wanted in regard to framing, but this time they were more open to my ideas I had for the shoot. With Eshom’s experience as a storyboard artist and a visual bible I created, we worked out how to define and guide the look together. 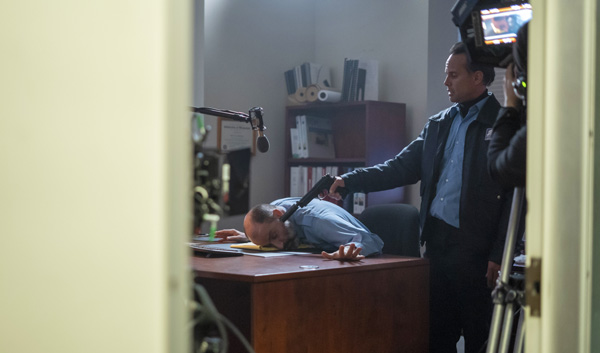 Much of the production took place in rural Ontario, Canada, and had the cast and crew out in wide, snowy countryside in the dead of winter. Wanting to take advantage of those sweeping white landscapes, Johnny shot this project on the ARRI LF and Mini LF cameras. ‘FATMAN’ was not only the first time he used the LF – it was his first experience using an ARRI camera on a film.

“Up until this film, I’d been using Panasonic and Sony cameras. I had contacts at those companies and felt confident with the look the cameras produced, especially the Sony F55. But this time the F55 didn’t have the qualities I was after. I wanted a unique look for this film. When ARRI was in the early testing stages with the LF before it came to market, I had shot a quick test at Hotrod Cameras in Burbank, which piqued my interest. When I started working on ‘FATMAN’, I went in to ARRI Rental’s Burbank office for extensive testing, and made the decision to use them.”

He only had one functional issue with the cameras. “The Mini LF has internal motorised ND filters, large enough to cover the large format sensor, but the full-sized LF camera doesn’t have them. After working with other cameras that have the internal ND filters I have really come to like them, and missed that feature on the full-sized LF,” he said. 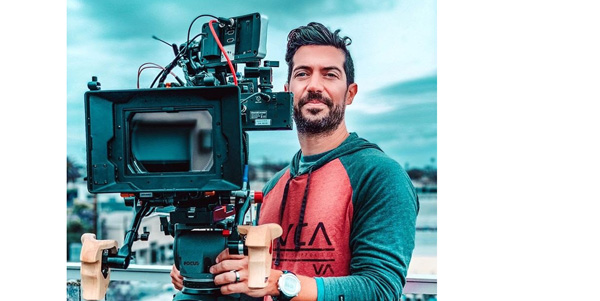 As ‘FATMAN’ is essentially an action movie, the Mini LF helped handle the different shooting styles in the production without creating a contrast in image quality. It was used on Steadicam for several scenes, and Johnny did a bit of handheld work on the fight scenes. Other shooting styles were a dolly and a jib with a Ronin 3-axis stabilisation gimbal mounted on it, but crane work was kept to a minimum to help keep to budget.

He carefully considered how he would take advantage of the widescreen space for storytelling. When filming the hitman, for example, he used longer lenses and a hard light, effectively pushing him away from the audience and giving him a cold unfriendly quality. He used a long lens for shots of the boy as well, to show that he was caught in the middle between the two men and what they represented, but used a softer light.

Cringle, on the other hand, his lead character, was shot with shorter lenses using soft lights to bring him closer and give him audience appeal. But Johnny also wanted the space to capture both Cringle, fairly close to camera, and the expanse of the countryside in the same shot. 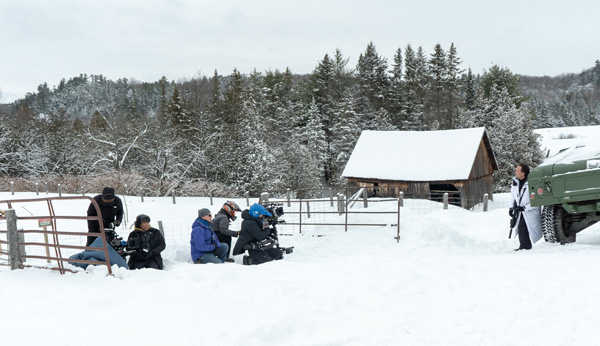 To achieve his wide screen vision, Johnny had originally intended to use anamorphic lenses on the Skinnyman and Billy Wenan portions of the film, and to capture Santa and some segments of the movie shot in Alaska with ARRI DNA Primes. But when the anamorphic lenses he had expected to use weren’t obtainable in the end, he chose the DNA Primes for all the work. The images were cropped to achieve the wide screen aspect ratio.

Johnny had always liked Cooke lenses, and to match that look with a large frame sensor he chose the DNAs. After developing DNA lenses for the ARRI 65, ARRI Rental also made them available for the sensor size of the ALEXA LF system, comprising re-housed vintage optics with a multi-blade iris for a circular bokeh.

Johnny said, “On FATMAN, I was fortunate enough to work with Peter Crithary at ARRI Rental. Their staff, including Andrew Shipsides, Rafael Adame, Chris Ragsdale and Matthew Kolze are unbelievably knowledgeable. 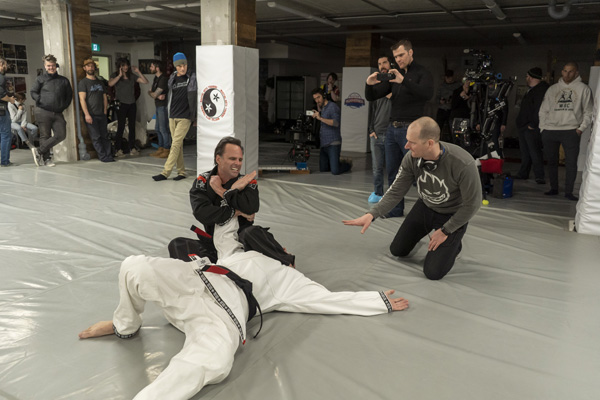 The crew, cast and directors set up a fight scene in a dojo.

“I set up a lens test with them early in the process to hone in on exactly what I was aiming to do and, in the course of testing, really fell in love with the look of the DNA primes for this particular project. The DNAs are different from most lenses in that the set is made up of vintage glass from various manufacturers. Each set has its own unique look and characteristics. After explaining exactly what I was after visually, Rafael and Andy helped me put together a set that best matched that vision.”

Johnny had never worked in such low temperatures on any shoot before their outdoor sequences in Ontario. “We were out in -30° F weather for about three and a half days of the shoot in harsh, often variable weather. Most of my crew were local to Ontario and well-versed in working in the cold, which was a huge asset to the production. They were always prepared to keep the gear warm and ready to go,” he said.

“The only real problem we had as far as gear went was on a -36° F degree morning when we were shooting on Steadicam. The fluid in the Steadicam sled began to bind up between takes. From that point forward, the AC’s kept a heating pad wrapped around its arm and sled at all times.” 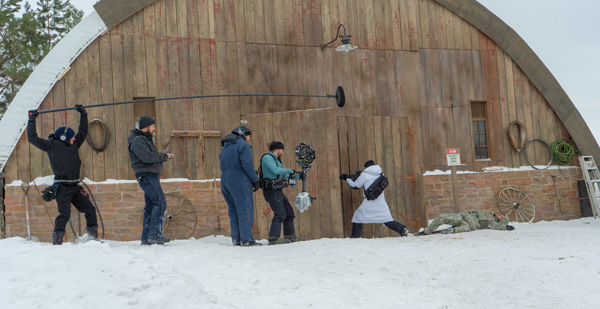 The interior of the Cringle’s house was shot at one location, and the exterior and surrounding property at another. Out in the white snowy environment, Johnny used a negative fill technique to help direct attention to the talent. “Shooting in a field of sheer white snow can be a challenge, as getting contrast becomes a feat in itself. In testing, I found that shooting the actors a stop to a stop and a half under the background exposure actually helped them stand out.

“Thankfully, we were shooting a thriller/action film with darkly comedic elements, so capturing my actors slightly under exposed was a good fit with the overall look. Doing this wasn’t always easy in the scenes when the snow had to be left undisturbed. In the cases when it didn’t matter so much, I would move in 12x12 solids as our negative fill in order to create some contrast. By laying the solid dark panels on the ground in front of the actors or moving them, in from the sides, I was better able to control the huge amount of natural bounce that you get off the snow.

“The colourists at Company 3 supplied us with one of their own LUTs and we used it for the entire film, which helped later when we worked on the colour grade. The DIT Andrew Richardson was also using it with Live Grade software while we were still on set, and then output the dailies for us to review every night.”   www.directorofphotography.com 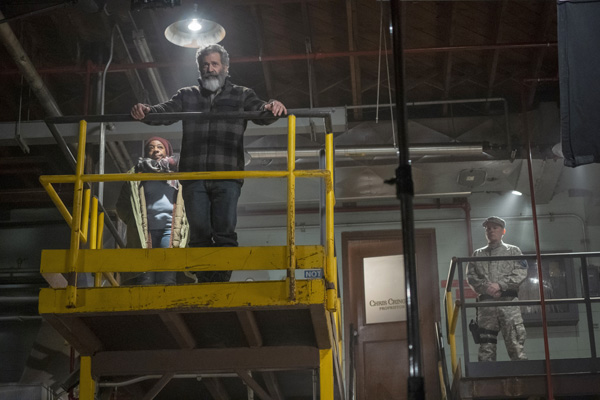