MPC and DICK’S Sporting Goods Get Animated for Christmas 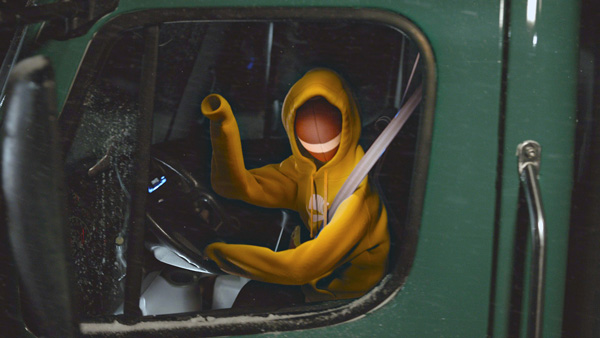 MPC worked with Pacific Rim Films director Shawn Levy again this year to bring back the animated characters from their DICK’S Sporting Goods campaign made for Christmas 2019. This time, not only do the products come to life as characters after the shop closes – they escape from a DICK’S Sporting Goods Distribution Centre, commandeer a delivery truck and drive to a young boy's home to deliver the presents themselves.

The work was led from the New York studio with support from MPC’s global studios in LA, Bangalore and London, as well as the MPC Film team who handled  pre-vis. They were all led by Animation Director Chris Bernier and Creative Director Anthony Bloor, who started working with the agency Anomaly and Shawn Levy well before the shoot began.

“This year we focused on bringing even more character into the whole story. All of us – Anomaly, Pacific Rim Films and MPC – came up with ideas during the edit so that our animators could include as much action as possible to make the characters likable and fun, including kick flips, rail slides, fun runs and football kicks,” Chris Bernier said.

“The key challenge with an animated campaign like this is finding the very fine balance of a believable photo-real product that also has an appealing character. We lean on the traditional animation principles like squash and stretch to build character and fluid movement, but we have to make sure we don't push it too far into a cartoon feel. The lighting, texturing, shading and simulation of the characters goes a long way to introducing believability, but ensuring a fun performance is just as important to avoid the risk of feeling hollow or lifeless.”

The team revived several characters from last year’s spot to serve as supporting and leading members of the group, including updated versions of the hoodie, skateboard and ping pong paddles, plus new characters such as the gym weights and football. Mike Lombardo in New York, a 3D Lead for the project, talked to Digital Media World about building and getting to know these characters inside out, and setting the stage for a fast-paced story. Mike’s specialites are lighting, animation and look development.

“Pre-vis was essential to this project,” Mike said. “When shooting a commercial with actors, everything is happening on camera in front of you, but when the entire cast is CG it's hard to judge timing and character performance while on set. Doing pre-vis for the entire spot gave us the ability to both craft the character performance, and also make sure that we were telling the story well.

“A lot of fun ideas tend to pop up once you start putting sequences together and forming the story. For instance, in a sequence in the distribution centre, the hoodie is riding the skateboard, catching the football, and high-fiving the jacket all while the other characters are trying to catch up. That's a lot of action for one shot, so going through pre-vis helps us determine the timing to allow for each character's performance.”

The main challenge in re-creating an element in CG that also exists as a practical prop is extreme accuracy. For a start, they relied on dozens of photos of each product at every possible angle, along with many different measurements. Those were used to create the asset models, textures and shaders, but when placing the CG characters into shots, they were going to need set lighting references as well. 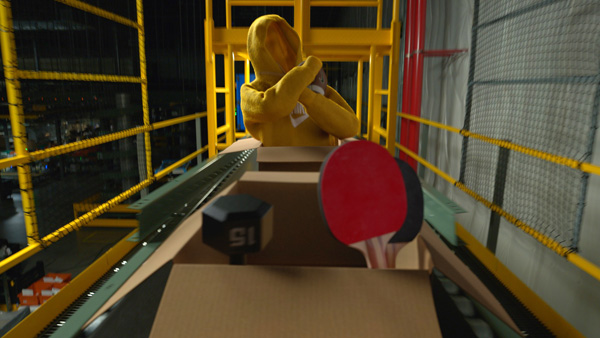 “On set, for each scene that required a CG character, we shot a separate take with all of the physical products as stand-ins. Some props like the hoodie were rigged up so that they could be posed like their characters, others just sat on the ground and some shots, especially when the camera was moving, required a bit of puppeteering.

“Each prop was roughly placed where their CG counterparts would end up and shot using the same lighting set-up used for the plate, resulting in an accurate lighting reference for every character for every shot. We then pieced together an edit of all the product stand-in shots that we could easily refer to as we lit our models. Lighting a character becomes much easier when you know exactly what the real thing looks like in the scene.”

While bringing these objects to life in terms of realism and motion with VFX and animation, the team wanted to let them express emotion despite the lack of facial features or expressions. “Emotion and expression aren’t limited to what a character's face is saying. I constantly find myself acting in my desk chair trying to find the right pose, or paying attention to how I'm performing a specific action. For example, what are my shoulders doing? How are my hands reacting? Is my posture changing?” Mike said.

“All of these things reinforce those same emotions, especially if you exaggerate them a little. In early development we likened the football character to a puppy, a great example of something that shows emotion without using facial expressions. When a puppy expresses happiness or excitement, it mostly comes from the body performance.” 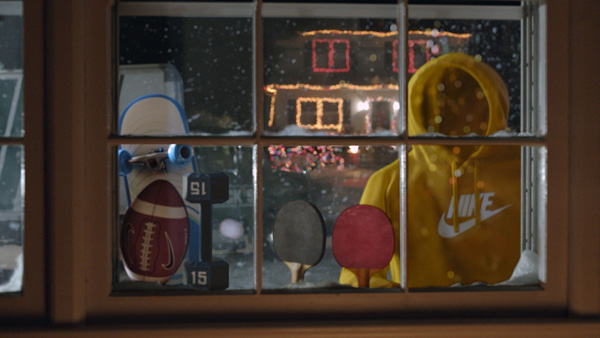 Putting more emphasis on their emotional read and humour, each character had to hit very specific poses for the animators in order to master the emotional connection. Technically, that meant building new animation rigs. The fact that a lot of concept sketches had been carried out early on in the process was a huge help when moving into animation.

Some of the shots, like the smiling football inside the hoodie waving to the security guard, all came from early sketches. Those sketches showed our rigging team what the performance and movement for each character would be, which in turn led to a better understanding of how the rig would need to perform.

“Moving into animation always starts by blocking out key poses," said Mike. "For this specific example, we knew the Director, Shawn, loved the hoodie waving sketches, so we blocked in that pose using the concept as our reference. From there, it's all about playing around to see what works.

“We have a great team of animators, all of whom had a hand in developing each character's personality, and finding the perfect comedic timings. As the saying goes, the difference between getting a laugh and not getting a laugh is just one frame.

"Our animation director Chris and I had a very long conversation at the beginning of the project when we gave the characters a story. Since the spot was about the holidays and coming together, we tried to think of our lead characters as a family. As I mentioned earlier, the football was the family puppy, but then we also had the ping pong paddles as twin eight-year olds with a bit of a sugar rush, and the hoodie who was the more responsible older sibling. Defining who the characters are beforehand can really help shape their performance.” 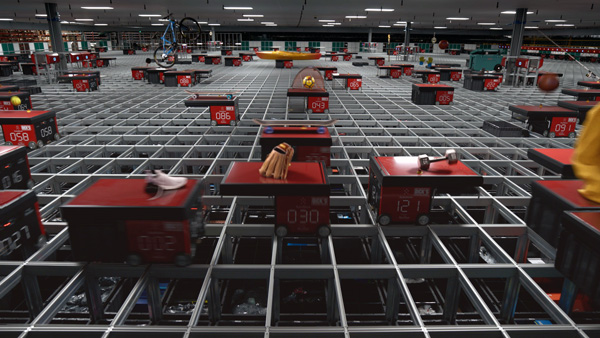 There’s actually a bit of twist in the rigid characters like the skateboard, ping pong paddles and golf club. Anomaly, Pacific Rim Films and MPC all agreed that being able to slightly push the physical objects beyond their real-world boundaries would only help the performance, although going too far would lose that fragile sense of realism. Getting it just right required some trial and error. Other changes to character effects included simulating the cloth in instances like the hoodie, for which thy also used MPC’s fur system to recreate the fibres of the material to give it a realistic cloth effect.

“The skateboard is a great example of what a little extra bend and twist can do to help show emotion in an otherwise rigid character,” Mike said. “You're supposed to love all of your children equally, but I think this one might be my favourite. The skateboard character is quite versatile in that it's doing kickflips in one shot and then dancing in another shot.

“There's something very charming about how its wheels are a bit of a multi-tool as well. They go from wheels, to arms, to eyes, changing into whatever makes the most sense for that scene, which makes for a lot of fun when coming up with performance ideas and then executing them. It's awesome to see a character taken from concept all the way through to final render. So much time and hard work goes into the development. It was really exciting to see the baseball glove come to life, especially with all of its acrobatics. The rigging and animation teams did an incredible job getting all of those rolls and twists to work so well.”

Out of the Office

One key difference in creating this year’s campaign was working remotely. A physical shoot took place in person with socially distant safety protocols while MPC interacted with the director and agency remotely to go through the animated shots together via collaborative review sessions. 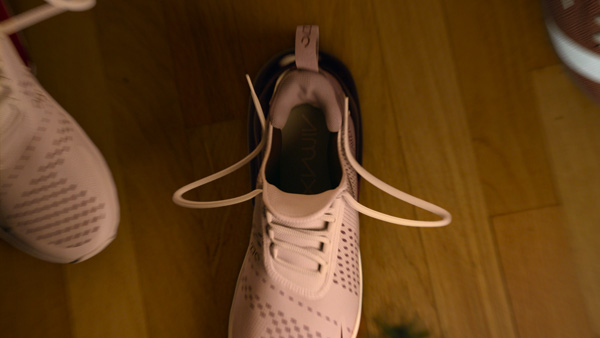 All artists were working from home, both in the London and New York offices, but stayed in constant conversation with each other. MPC’s remote working architecture allows every artist to log into their physical computers that are set up at the studio, giving them access from their home offices to all tools, software and hardware that they normally use.

Mike said, “Microsoft Teams was used to stay in constant communication, along with video call check-ins with departments almost daily. These calls not only helped coworkers and friends stay in touch, but are also useful for screen sharing while helping each other problem solve. This was a special benefit for this particular spot, as we were working in tandem with colleagues in London. Being able to hop on a video call might not sound revolutionary, but that constant communication made all the difference.”

Every morning, Chris, David and Mike would meet with the different departments over a video call to go over the previous day's work. Typically, one of them would share their screen and scrub through the timeline, allowing everyone to see all progress being made, give notes and feedback, share further ideas or suggestions, and critique each other's work.

“I can't stress enough what an exceptional team we had at both locations. Every artist brought great ideas to the table – usually during these morning dailies sessions. Collaborating with London this way was a great experience, because we normally don't get so much face time with other MPC studios. Simple video chatting has allowed us to work directly together while half a world apart. When it came time to share work with Anomaly and Pacific Rim Films, Chris would lead a similar screen sharing session to show the latest edit, resulting in real-time feedback that we could instantly bring back to the MPC team.”  www.moving-picture.com