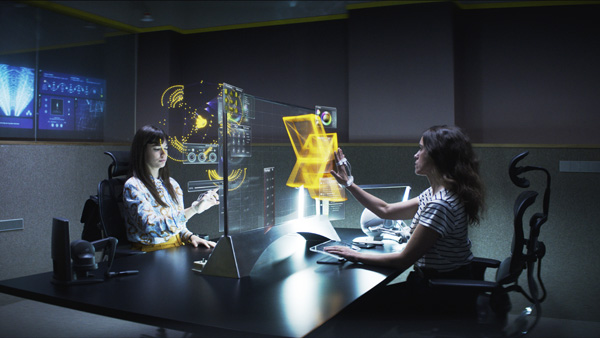 Set in 2035, AMC’s six-part series ‘Soulmates’ revolves around a new test that becomes available in the near future. The story is based on the notion that, by taking this test, a person can be positively matched with his or her ‘soulmate’. The result is a combination of romance, science fiction and sometimes horror. Each of the six segments follows different characters choosing to discover – or avoid – the impact and complexity that the outcomes of this test send across their lives.

Devices and systems evoking the near future were required throughout the characters’ environments. However, with the show’s time setting of just 15 years from now, subtlety was essential to invent objects that were both futuristic and believable.

Founder and VFX Supervisor Michael Illingworth and his team at Vine FX crafted the look and feel of these items and their associated motion graphics effects, collaborating with artists from Revolver and Momoco and with graphic designer Andy Bottomley. The brief called for a ‘modern day futuristic look, clean, understated and authentic’. Equally important, the visual effects were to integrate naturally into the scenes without distracting from the stories.

Also creating firework and gore enhancements and a number of digital matte paintings, in all the team at Vine FX delivered 500 shots for ‘Soulmates’.

A large number of VFX involved screen replacements for devices ranging from mobile phones and refrigerators to tablets and monitors with transparent displays. Michael said, “The producers sent us a mood board for the look and feel they envisioned for the show. We approached our designs to reference the feel of current modern technology, using a simplistic, functional and believable look without seeming overly 'futuristic'. To avoid disengaging the audience from the plot, it was important that the use of devices fit naturally into the whole show to help the characters navigate through their own unique stories. 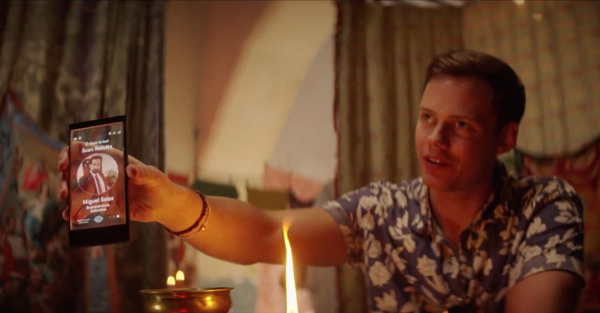 “We chose to work with Revolver, Momoco and Andy Bottomley based on their mastery of the skills required for the tasks at hand. To make sure the look and feel remained very consistent, we established a clear idea of what we wanted to achieve, relying on the client mood board as our main focal point. All of the designers provided us with rendered elements – images or sequences – that we then tracked and composited into the shots. That way, they were free to use whatever tools they needed to get the work completed, and in every case, the client had final say on the finished animated graphics.”

Integrating the actors’ moves on-set with the devices, demanding complex tracking and detailed rotoscoping, proved to to be the team’s main challenge. “Our matchmove team did a great job of making sure all the phone and tablet graphics stuck accurately within the images. Lots of shots were captured in very dark environments which made tracking the devices more challenging, as well as the sheer volume of shots to track and composite,” said Michael.

“We tracked each shot in the same way by carrying out 3D object tracking in 3D Equalizer and Maya. We could then bring these tracked objects into Nuke for compositing. This process meant we could get accurate perspective shifts and correct motion blur every time, not usually possible with 2D corner-pin tracking.”

A quite creative example of futuristic devices were the various satellite navigation systems that appear in many scenes across the series. A feature of this story is that an individual’s social status is keenly judged by how up-to-date their devices and transport are. 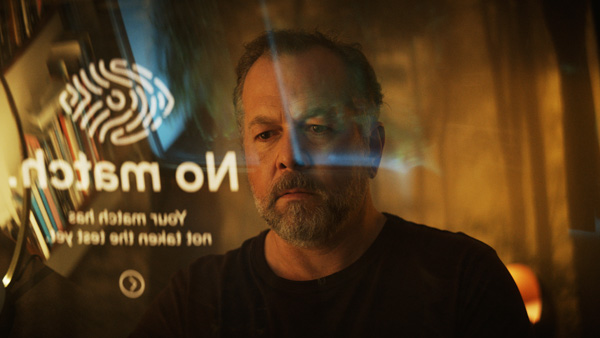 “When designing the sat nav systems, we were careful to be conscious of who the characters were in each episode, as well as the vehicle that they were in,” Michael said. “The older vehicles were equipped with less modern systems to faithfully reflect the vehicles’ age so that, even in the story world, we could authentically convey who had the most up-to-date systems in contrast to someone with older technology.”

One scene features an interactive projected wall display that went through dozens of design iterations in order to sell the idea of the development behind a sophisticated device, elegant and clean-looking but purposefully functional. Similar to the sat navs, it was important to the client that the projected wall reflected the wealth and status of the character associated with it.

“We went went back and fourth on this many times to achieve the desired look and feel. Apple’s use of design was adopted as a reference point – we used the touch-screen functionality as a starting point to build upon its purpose as a premium interactive tool,” said Michael.

Not only was the shot count for this show substantial, but it was the largest number of motion graphic shots the team has ever produced. The team at Vine FX faced various technical and pipeline challenges, some of which only became apparent during or after the shoot. Not least of these was the production’s 6K resolution plates.

They increased the bandwidth of their connections between workstations and the network to ensure everyone was able to work with smooth playback. A storage file system upgrade allowed them to work on the full-sized plates with ease,  and their hardware was able to handle working in real time at 6K, so that proxy plates were not necessary in order to keep to schedule.

CG Supervisor Pedrom Dadgostar said, “In terms of raw storage, this is the biggest job we have ever done. The sheer volume put a lot of stress on our servers. A number of upgrades were implemented in order to cope with the vast amounts of data being used. In order to get such a large quantity of work through the door in time, we onboarded additional staff and kept our pipeline fairly simple, while working very closely with our outsourced motion graphics effects vendors.”

A rigorous pipeline was implemented as well to ensure the organisation of assets from multiple vendors. For security, the external vendors did not have access to Vine FX’s systems – instead the collective group relied on encrypted file sharing systems to transfer media.

Michael said, “The joy of a project like ‘Soulmates’ is the subtlety of the VFX, how they are used to enhance the story without the viewer necessarily noticing. It’s always very rewarding to pull that off. We had a large shot count and technical challenges but my whole team, from runner to the top, all worked tirelessly. I’m proud of both their dedication and the work they produced.

“Like other facilities, we had lockdown to contend with, as this was our first project of the year. But during 2020 Vine FX actually grew at a time when many businesses have had to cut back, increasing our staffing by a third. Post-production VFX has been one of the few areas of the industry to resemble anything like business as usual. Fortunately, Vine FX was already in a firm position for remote working, which enabled the team to quickly adapt and expand without geographical restrictions.”

Vine FX are currently working on War of the Worlds 2, (Fox), Viewpoint (BBC), supporting pre-production for Extinction (Sky) and are due to start working on Baptiste 2 imminently (BBC).  vinefx.com