Alt.vfx Animate a Magpie with a Mission for ‘Penguin Bloom’

Alt.vfx worked on the film retelling of ‘Penguin Bloom’, Cameron Bloom's true story and book about his wife Sam, the tragic accident that changed their lives and a magpie named Penguin.

The Bloom family’s story began when Sam suffered a near fatal fall that left her paralysed and confined to a wheelchair, and deeply depressed. One of their three sons discovered an injured magpie chick abandoned after she had fallen from her nest. The boys named the bird Penguin for her black-and-white plumage.

As they nursed Penguin back to health, her resilience combined with a playful personality helped to pull the family together and lifted Sam's spirits again. The challenge for the filmmakers was the character of Penguin herself, who became a combination of live-action, puppeteering and CG, all working together to achieve a realistic, engaging performance in every sequence she appears in.

With over 200 VFX shots in the film, Alt’s work included numbers of CG magpie shots for each stage of Penguin’s life – baby, adolescent and adult – which each required its own model, texture and groom variants.

The team’s VFX Supervisor Jay Hawkins said, “We were involved quite early on in pre-production, having initial discussions with director Glendyn Ivin and producer Emma Cooper, just going through the script and talking about what would be CG and what would be practical. We also drew up a list of rules and game plans to follow if we didn’t get what we needed in camera.

“A team of trained magpies were used in as many shots as possible. The script aside, our goal was to embrace what the real birds did on set, and try to work the story to accommodate that as much as was feasible. Finally, in case that simply didn’t work, we also prepared ourselves to do it all in CG in order to tell the story in the right way.” 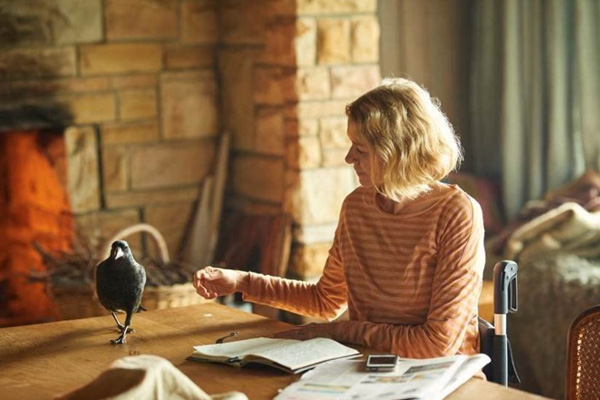 They developed strong relationships across the whole production, with lots of communication. Everyone became a team, working towards the same goals. “Being involved so early meant we got to meet the bird trainer and handler and all the trained birds, and also develop good relationships not only with the director, but the producers and all the key crew, including the actors – birds and humans.”

To include Penguin as a real member of the cast, the production used a range of in-camera techniques from live-action trained birds to puppetry and animatronics, plus visual effects in post ranging from compositing real birds shot on green screen to full-CG bird shots. Instead of approaching the bird one way or another from the outset, it was a matter of doing whatever was necessary in every scene in order to tell the story in the right way.

On set, various props and devices – like stuffed birds, laser pointers and full puppetry – helped the actors and artists with eyelines and interactions when the production couldn’t shoot with a practical bird. 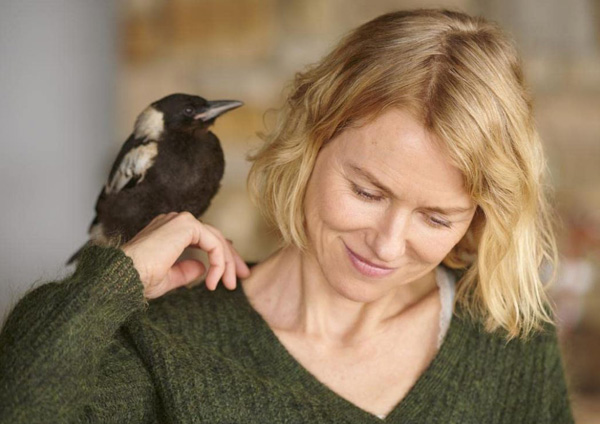 Head of Animation Chris Rentoul said, “We would take over any of the shots where the birds didn’t hit their marks or give the desired performance. This upped the stakes for us because in one shot you might see a real bird, in the next our CG bird, and then we’d cut back to real bird. That meant our animation had to be as authentic as possible. We got up close as well – some shots show a full-frame CG bird.”

“The main goal for this project was for Penguin to be a real, natural bird,” said Jay. “The film is really the Bloom family’s story, and the part that this incredible bird played at a highly emotional stage in their lives. As the family chose to do at home, the rules for the film were that Penguin was not a pet, she was wild bird living in their house. So we were bound by the same rules.

“Normally when we work on CG characters we might add a degree of anthropomorphism to help sell a performance, but here that wasn’t an option. It just had to look real. Cameron Bloom, the author and also photographer of the original book, shared his raw footage of the real Penguin for us to study alongside many other magpie references. In the end our goal was to match reality 100%.”

As the production proceeded to shoot scenes of the Bloom family’s home life at a location on Sydney’s northern beaches, Alt’s team was on hand to supervise and record details that the compositing, lighting and other artists would need in post. “Every detail was important,” Jay said. “We were on set for every scene that had a bird in it, since we were never sure exactly how it would play out. Would we capture it in camera, use a digital approach – or a combination of approaches? We shot all HDRI and heaps of action for the plates, shadow passes and so on, so that we could match the scene very precisely if we needed to include a CG element.”

Understanding the magpie’s distinctive build as the foundation for the motion and behaviour was the first task. Chris said, “Jay shot a massive library of video and photographic reference both from the bird trainer’s facility and of the birds on set. I also trawled the internet for all the magpie video reference I could find of both on-the-ground and inflight behaviours.

“On top of that, I actually just sat in my backyard on several late afternoons with my iPad camera set-up, capturing all the local magpies going back and forth. You can never have enough good reference when reproducing a real animal digitally.” 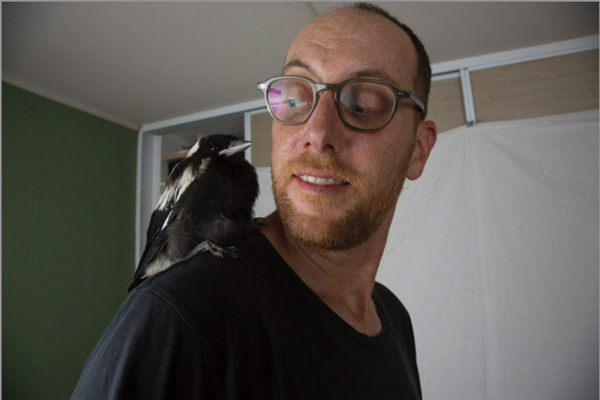 Emulating bird motion brings several challenges for animators. Chris has a few tried and tested tips for getting birds into motion with realism. “Animating with the head completely detached from the body in world space – I find that method completely sells magpies and most birds, for that matter,” he said. “That head really does its own thing. It leads by several frames and then totally freezes as the rest of the body catches up then settles, while the head stays almost dead still.

“Posing the wings at rest when the birds aren't flying is another challenge, but our fantastic rigging department just rolled that into a slider control that made things so easy. Their support over the project was essential to us and made the moving anatomy feel correct.”

Magpies actually have a lot of personality, which is why people often consider them as pets. They play with dogs, jump up and down on sprinklers, and cuddle up to their owners. Chris said, “The shot when Penguin sits on Sam's lap when she is crying is supposed to be a bird version of your dog licking your face when your upset, so I used posing and timing to put her concern across to the audience in an avian way.

“Penguin slowly looks up at Sam's face with tiny micro movements and slight head tilts that help convey curiosity, if not genuine worry going on in her bird’s mind. Another example is a shot on the couch where the boys are all playing. Penguin joins in by squawking, hopping up and down and spreading out her wings. Again, it's nothing a magpie can't do naturally, but makes her feel as though she's part of the family.”

Slow motion reference is, of course, ideal for understanding the fundamental details of real wing motion, and Chris also found very helpful footage of magpies that had been filmed by drones close up. “If you want to understand how something flies, a camera tracking along with it helps a lot. We also discovered a fellow called Brendan Body who has a website called 'How To Make Birds Fly Good'. If you’re going to animate any kind of bird flying, read his tutorial first. It's very thorough.”

As wings won’t take a bird very far without feathers, Technical Director Chris Gardner described Alt’s in-house approach to feathers. He said, “We’ve designed and built quite a few birds at Alt, and have evolved a sophisticated in-house feather system as a result. Within that, we make individual feather types. Each is made up of thousands of strands, mimicking a real, physical feather.

“We then define different areas of the body for different feather types, and a series of brush-based tool allows us to groom the direction of the feathers to get the right look, which is then applied to the animated bird so that it all moves together as one cohesive asset. We can also trigger different grooms based on the animation. For example, wings folding is a generally tricky action. In that case, we can do some corrective grooms to make sure the feathers don’t collide through the body. We also do a simulation pass so that the feathers move in a physically plausible manner.”

Pre-vis was important for shots with all-digital birds. A primary example was the fight sequence, in which they had decided from the start that no real birds would involved due to its violent nature. “Jay went out to the location and collected measurements and photo reference of both the balcony and backyard lawn, which gave me the size of our 'arena',” said Chris.

“Then we collected video reference of magpies fighting that we found online – there's a lot more out there than you would expect! We noticed that when a group of magpies brawl, they each have their own distinctive personalities – the submissive bird who gets taken down belly-up rather quickly, the bully who stays on top of the submissive one, pecking away in short bursts, and the onlookers who are content to gather around and enjoy the action. Now and then, an onlooker will peck the victim in the back of the head just to stir things up when the fight slows down. They are real hecklers!

“Once we understood the fight behaviour, I did quite a detailed anim block-out for all the shots in the sequence, which involved three birds, and stuck pretty closely to that once we received the plates and moved into the animation phase. Not surprisingly, this brawl was our hardest sequence. Birds locking talons, balancing on top of each other in between savage pecking attacks – getting all that to feel physically correct was certainly a challenge, but a fun one.”

They also pre-vised a shot of the baby bird jumping around on a book shelf, interacting with various knick-knacks. On the day of the shoot, it was captured as one long take of the shelf while the objects were moved around practically. 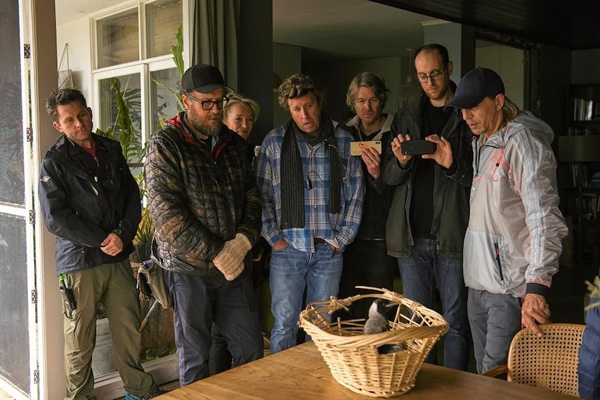 The team have a first look at the baby magpie in-camera performer.

The fact that the story proceeds through Penguin’s life from her days as a baby to adulthood extended Alt’s work in an interesting way – the team had to capture the way she would look at various stages of growth. Their research into a magpie’s life cycle showed large differences between those stages. Jordan McInnes, CG Supervisor/Head of Rigging, said, “That meant treating them as separate assets, while using one ‘build’, so to speak.

“We identified three key ages throughout the film – the baby, the adolescent and the adult version. For the baby we took care that our proportions felt child-like – a bigger head, longer disproportionate legs, fluffier feathers as well as a cheeky performance. For the more grown-up versions of the asset, our adolescent and adult, we had to constantly reference back to the baby, while making sure that the sleek, calculating, clever personality of the bird shone through.

“Outside of keeping the feathers in the same colour palette, we layered in various imperfections to help age the asset in stages. From there, we studied hundreds of hours of reference material to truly capture every nuance of behaviour of the bird.”  www.altvfx.com