Freefolk Welcomes Robots to the Family For New ŠKODA Campaign

Directed by Frederic Planchon through Academy Films, with Freefolk leading post-production and animation, the commercial portrays the car as an SUV for people who want the environmental benefits of driving electric without compromising on distinctive design. See the making of video here. This commercial is a finalist entry in the 2021 AEAF Awards.

The agency Fallon developed a story about a human family who adopt two young baby robots, illustrating the car’s dual nature – ecological concern with dynamic design. As the story develops, the siblings’ personality differences become apparent – ‘Purr’ is gentle and caring, while ‘Grrr’ is impassioned and creative.

Frederic Planchon and the Freefolk team, led by Creative Director and VFX Supervisor Jason Watts, brought the story to the screen by creating 3D characters with believable human personalities. The initial art for the two robots came from concept artist Jake Lunt Davies, known for his work on several of the Star Wars films, ‘Raised by Wolves’, ‘Artemis Fowl’, commercials and many other projects.

Frederic said, “From the start, I felt a passionate and collaborative spirit to create these two robot characters with Jake. Despite the fact that it was impossible to meet in the same room, I really enjoyed working with the guys at Freefolk. Their animation and relentlessly detailed work was great, and the creative team and I never felt frustrated as we made tweaks and exchanged comments.”

The Same, but Different

Cheryl Payne took on the role of VFX Producer, Freefolk’s Harin Hirani was Head of 3D and Head of Colour Paul Harrison handled the colour grade.

The main call for VFX in this project was replacing the stand-in actors in each shot with realistic, engaging robot characters, created digitally from the ground up to match the concept art. Dozens of props, such as trolleys, tyres and tools, were also built in CG to support the robots' interaction with the world around them.

Particularly challenging for the 3D department was creating and maintaining characters with such a high level of detail and variety in appearance throughout the film. As well as the density of modelling and texturing needed in the mechanical areas – adding up to some 3,000 separate objects – the characters required different proportions and surfacing depending on their age and the differences between the PU-rr and GR-rr models.

The 3D work was built primarily in Maya, with FX in Houdini and textures created using Mari and Substance Painter. “The two robots are essentially the same, with different coloured markings and eye lenses,” Head of 3D Harin Hirani said. “However, to reflect their personalities, we made small adjustments. For example, we removed some of the external components to GR-rr’s arms, revealing internal mechanisms. We also made his surface material more weathered compared to PU-rr.”

The complexity and detail were largely due to the need to incorporate real world joints and mechanisms that would allow the robots to move as required. “Once we worked those crucial parts out, such as the shoulders, feet and waist, we dressed the model with components based on real world references to make them feel sophisticated and highly engineered,” said Harin.

“Several modelling artists worked on the robot design, each doing their own R&D for their corresponding section. We would hold dailies to review what each artist had come up with and then have a collaborative brainstorming session while developing the design.”

The large number of components were managed by working with strict organisation across the team, allowing them to name and place all objects in a consistent way. With multiple artists working on the build, they also partitioned the robot in sections. Then each artist could follow the same hierarchy and naming convention for all the parts. The textures were built by layer so that different types of detail could be switched on and exported when needed. 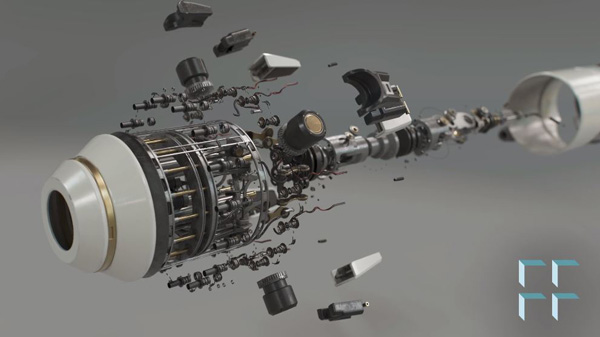 Harin said, “We tried to minimize how much alteration each age group would need. The head only required geometry alterations to accommodate bigger eyes when younger, for example, and the neck as well. Then the rest was done through textures – the younger the characters are, the cleaner the textures look.”

One of the team’s main objectives was to differentiate the two robots and, given their essentially similar build, animation was the most effective way to do that. PU-rr was a calm, considerate robot, while GR-rr was more energetic and playful. They tried to push that narrative in the storytelling by reflecting those personalities in the animation.

The onset actors were mainly used for composition, interaction with live action objects and for lighting reference. “The robot's proportions meant that motion capture wouldn't really be suitable, nor was the motion of the onset actors carried over to the shots,” said Harin. “We needed not only human but also robotic motion in the animation, in the right amounts, on a per shot basis depending on what they were doing.

“Therefore, the animators were left with a lot of freedom and flexibility when composing their shots, to be creative and develop the animation. As young children and teenagers especially, each robot is quite charming, which we emphasised by making them more playful. We also made sure the eyes could be very expressive so the animators could convey a lot of emotion purely by the shape and movement of the iris.”

More freedom for animators allowed the style of animation to change over the course of the story – the director wanted them to feel more human at the start of the commercial and then become more robotic in the factory sequence later on. “Much of the reference we collected was devoted to the factory sequence. They needed to move in a way that felt precise, manufacturing the car like the real world factory robots do. So we referenced a lot of factory footage and incorporated those movements into our robots, exaggerating the rotations in the arms and body to make them more agile and efficient,” Harin said.

From a compositing perspective, the 2D team led by Rob Sheridan wanted to ensure the 3D team’s robot work would shine through. As a result of meticulous preparation and planning, the 2D artists played a more supportive role and concentrated on the extra details that really helped the robots blend seamlessly into each sequence.

The assets were lit using data captured on-set to integrate them convincingly into the environment. “The shoot schedule was very tight and required travelling to many locations,” said Harin. “Knowing we would need a fast setup in order to gather the lighting data we needed, we used a Theta 360 camera. It allowed us to step in very quickly once they had shot the takes and before they changed the light setups in preparation for the next shots.

“Then in post, we tried to match the lighting and colour temperature to the plates as much possible to make the integration more seamless at the compositing stage. We also needed to pay attention to matching lens effects such as depth of field, lens distortion, matching black levels and creating light flares due to the anamorphic lenses.”

Freefolk Creative Director Jason Watts has worked with Frederic before but, in this Covid world, the experience was a little different this time around. He said, “From my perspective, the most challenging aspect was shooting with the restrictions of Covid. We had a director in a different country, the agency working remotely and the client at their base.

“Shoots are always an evolving process, taking into account typical issues like weather, location moves, general production hurdles and an increasing shoot load with diminishing days. Dialling in on the spot’s VFX requirements, when everyone is up against the clock, was sometimes very difficult, inevitably becoming much harder without key personnel eyeballing each other onset. Nevertheless, it certainly worked out very well in the end.” https://freefolk.com/