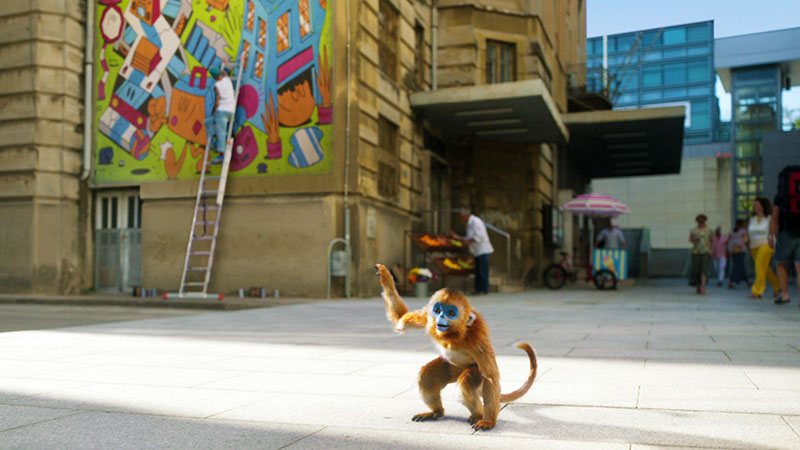 The VFX team at Freefolk have created a special creature for online travel provider ebookers, appearing in a new series of commercials they worked on with director Adam Gunser. The spots feature a small monkey named Eboo who suddenly emerges to show people how to use the ebookers app to book their holidays, and will be shown across Europe throughout 2022.  See the video here.

However, although his appearance and animation were always going to be realistic, he also needed to serve as a friendly and helpful human personality instead of a wild animal. “Striking a natural balance between an appealing character and a realistic creature was an artistic challenge,” said Freefolk 3D artist Jansen McCord. “We overcame the contrast by tuning the density of the fur to express that personality, and brightening the eyes to allow for more emotion.”

Harin Hirani, Head of 3D at Freefolk, told Digital Media World about the new monkey. “Eboo is based on a real species, the golden snub monkey that lives in China,” he said. “However, we made a number of alternations to the anatomy and colour to make him more friendly and to tie in better with the ebookers brand. The nose was softened, the teeth were made less sharp, darker patches in the fur were made more orange and the skin on the hands and feet were made lighter. 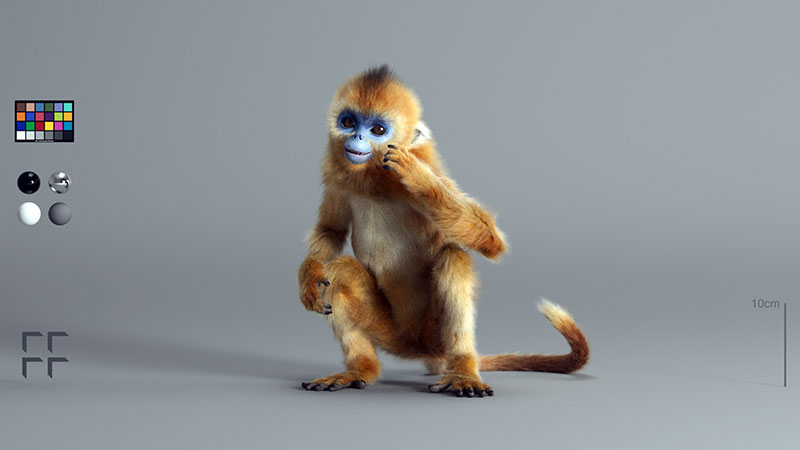 “We collated a bunch of reference images of the golden snub monkey at the very beginning of the job. One of the characteristics of the cuter looking ones we found was a little tuft of hair on the head, so we emphasised this on our Eboo to highlight his personality and focused on giving the fur a soft fluffy appearance. First and foremost, the monkey needed to look friendly and not intimidating.”

Integrating more human looking eyes into an animal face, with an attractive result, became a particular challenge. The snub nosed monkey has very dark eyes in which the schlera, or white part of the eyes, is hidden behind a membrane, but the client was keen to see more light and colour in the eyes. “So we increased the colour in the iris and had to tweak it on a per shot level depending on how the lighting affected them. We also had to make the pupil bigger because, against the lighter iris colour, smaller pupils gave the monkey a demonic look,” said Harin.

Light and lively, Freefolk’s animation evokes a real monkey, but without the nervous edginess. Since their first requirement was keeping the movement of the monkey realistic, they collected reference clips of monkeys performing similar actions to Eboo’s – jumping up onto a shoulder, running climbing and so on. “The rig itself was pretty standard, allowing for FK and IK controls of limbs useful for when the monkey is climbing and holding the phone and since we were going for realism, the facial controls were limited to expressions a real monkey could make.” 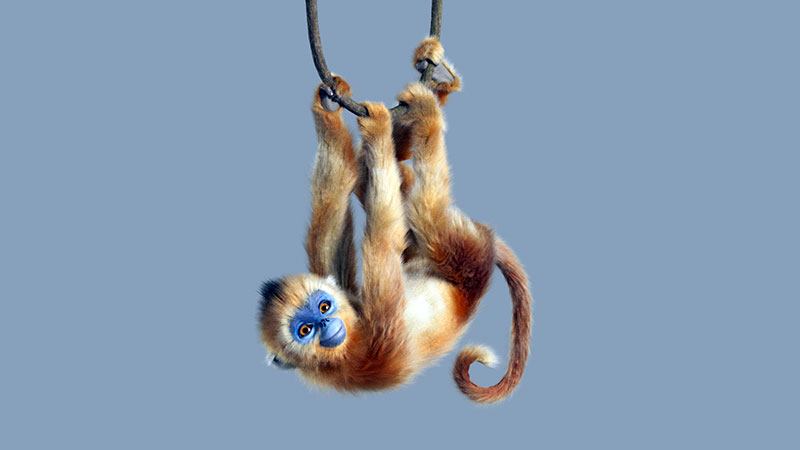 Extensive 2D work was also required to create Eboo’s interactions with clothing and objects, as well as colour grading and the usual complexity that comes with mixing CG and live action. The most difficult interaction was between digital monkey and the live actor when it sits on his shoulder. “We had to build proxy geometry for the man and then animate the geo to loosely match his performance, in order to cast the shadows on him correctly,” Harin said. “We also warped the shirt slightly as if the monkey is influencing it as he moves on his shoulder, and use the proxy geo to darken the man’s face where the monkey would block the light.”

Creature challenges notwithstanding, the trickiest parts of the whole project were the transitional shots in which viewers follow Eboo from one location to the next. These occur in two of the spots. The sweep of the camera had to appear as one fluid movement, which was difficult to achieve with the source material. The plates for the two shots had been aligned completely differently – recorded at different heights and moving at different speeds. 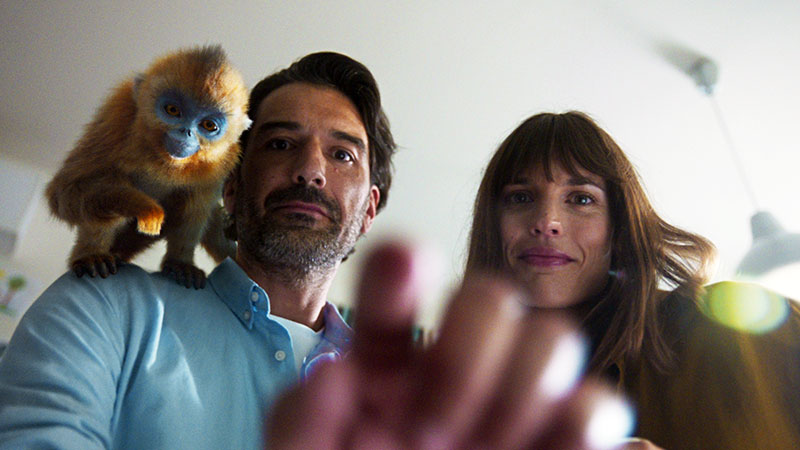 2D artist Rob Sheridan carried out the work in Nuke and commented, “Unfortunately, as with most projects, there were limitations on what the production could achieve in the timeframe, with neither transition matching up correctly in camera. To get the camera movements to align, we tracked both shots for each of the two transitions and created UV textures in Nuke that we could then project. Our 3D artists created frames that took us from one camera’s movement to the next, allowing us to project our UV textures back onto the new geometry.”

Taking the start from one shot and the end from the other and creating an intermediate stage meant they could invent a 3D camera move that blends them together. Those intermediate frames required baking the textures onto a piece of geometry representing the floor, allowing them to go smoothly from one scene to the other with no interruptions. All of this could be done inside of Nuke. 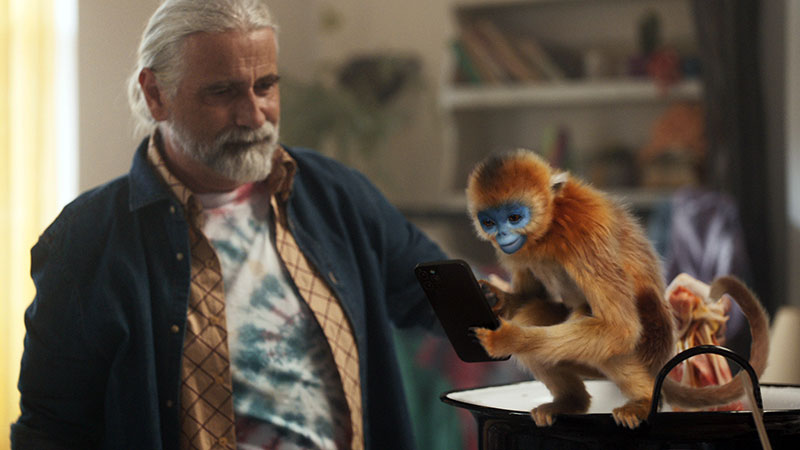 “One of the commercials takes place at the beach, and for that transition we created some 3D pebbles as well, as using only projections wouldn’t work due to the parallax,” Harin said, “The transitions were by far the most difficult challenge of the commercial, but one that’s hard for people to fully appreciate or understand unless they could see what we were working with!”

This really became complicated when dealing with the motion blur and the native camera vignettes that made painting a flat UV texture a troublesome task. At a certain point when the cameras have gone back to their original movement, they could then switch back to the original footage, fooling everyone into thinking Eboo really does have magic powers.

A team of five 3D artists and one animator worked for one month to deliver the Eboo asset using Mari, Houdini and Maya with Yeti and Arnold. In order to keep the creature workflow focused inside one package – Maya – they tied the groom created in Yeti to an nHair simulation rig, scripting the caching process for the fur to be used later in lighting. 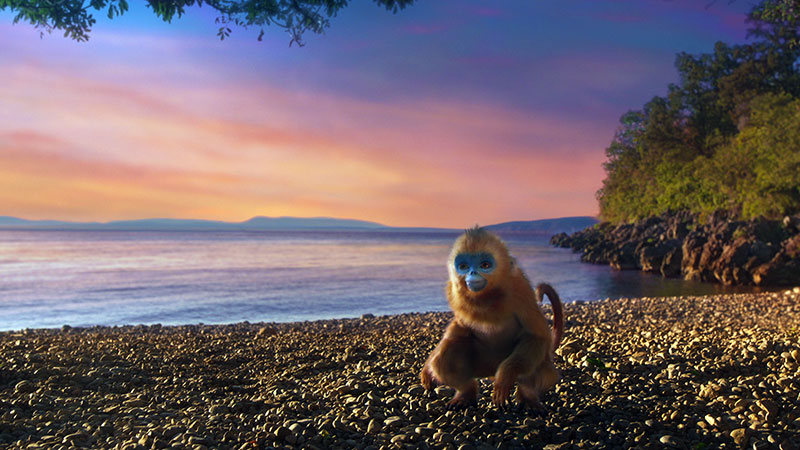 “We tend to keep most of the creature workflow inside Maya, as most animators use it as their main software and we currently use Yeti for our fur system and Arnold for rendering,” said Harin. “It’s more efficient for us to keep it all in the same software particularly as we have some custom pipeline tools to help speed up the workflow between stages. We often do take caches out of Maya to do some simulation work inside Houdini but that usually ends up back inside Maya for rendering.”

VFX Producer and Freefolk’s Head of Production Cheryl Payne said, “The project came to us via agency Fallon London, with whom we worked very successfully throughout 2021, particularly on the Skoda Enyaq Robots spot. We hadn't worked with Adam Gunser from Darling Films, and it's always nice to meet and collaborate with directors we haven't had the pleasure of working with before. Hopefully, ur Eboo will get the chance to go to some new and exciting destinations in 2022.” freefolk.com