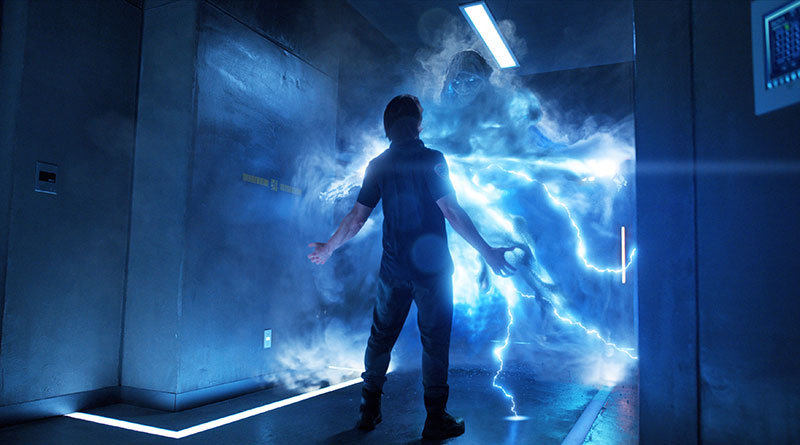 FuseFX created many of the most exciting visual effects that drive the story through season 2 of Netflix series ‘Raising Dion’, which premiered on 1 February 2022. Digital Media World talked to Kevin Yuille, who worked as VFX Supervisor for FuseFX on the show.

The shots were divided between teams from Fuse’s Vancouver and LA offices, although most of the artists were working from home and collaborating remotely. The series was shot in and around Atlanta, the setting of the story about a mother raising her son Dion on her own after her husband dies. When Dion starts to reveal superheroic abilities, his mother has to keep them secret to protect him, while trying to discover the source of his powers.

A character critical to the story comes more fully to life in series 2, thanks to FuseFX. Known as the Crooked Energy, or the Crooked Man, it emerged at the end of the first series in a shadowy, indistinct, supernatural form, capable of inhabiting the bodies of people in the story. The audience had been left uncertain of who or what it is, or how it is related to any other character in the story, knowing only that it is powerful and dangerous. 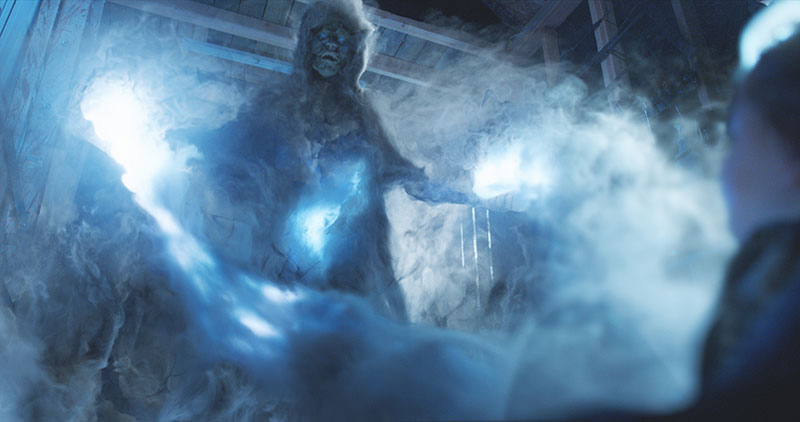 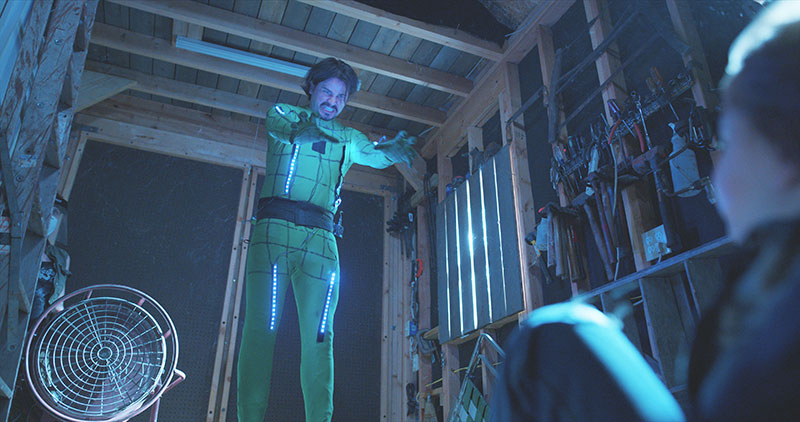 The directors wanted to take the Crooked Energy in a new direction for this series and begin to clarify its identity and intentions. Mark Kolpack was the client-side VFX Supervisor on the show, an artist that Kevin has worked with on projects over the past few years, including several seasons of ‘Agents of S.H.I.E.L.D.’.

“Mark took care of VFX supervision on set, while staying in continuous contact with us about our team’s requirements for completing shots. Lighting was especially important because the character’s form was based on smoke. In the previous series, the Crooked Energy had been limited to an amorphous smoke cloud, but this time Mark wanted an anthropomorphic look to come through, gradually solidifying with recognisable body parts as the episodes progress.

“We had our own concept artist at FuseFX, Jeremy Melton, for the Crooked Energy. Visual references Mark passed on to us included the Dementers from the Harry Potter films, and the classic Grim Reaper figure, and from there, Jeremy developed a fantastic set of images. He also worked out and visualised four stages of development for the character that would determine its looks in each episode. The production loved it. 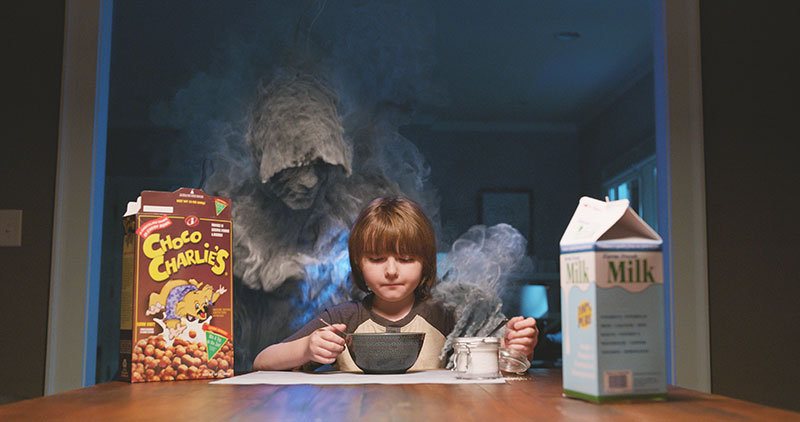 “Smoke simulations were integral to the character, involving Houdini effects in almost every shot. However, for the detailed results the production was after, smoke sims can be hard to control. Although Houdini has custom tools and deformers for controlling smoke, the looks achieved are challenging to preserve throughout the character’s animation and performance. Sometimes vector fields were used to direct the flow of the smoke.” Because vectors show the direction of points as well as speed, vector fields are useful to model a fluid moving through space – that is, they represent the velocity of the flow as it changes from one point to the next.

The Crooked Energy simulations were overseen by Ashkan Azarmi, a lead FX artist at Fuse with a passion for programming. Kevin calls him a wizard. “One scene in which controlling the smoke was especially critical was when the Energy escapes the character that was hosting it. Ashkan developed a complex system that began with a 3D maquette based on the actor standing in a T-pose, a kind of digi-double but heavily distorted and left untextured because its main purpose was to guide the animation.

“Then he moved to the first of the four stages mentioned above, when a rough animation performance was blocked out for the sequence, taking interactions with the environment and continuity into consideration. This had to be done ahead of the second stage when a cloth cloak was added requiring a cloth simulation. 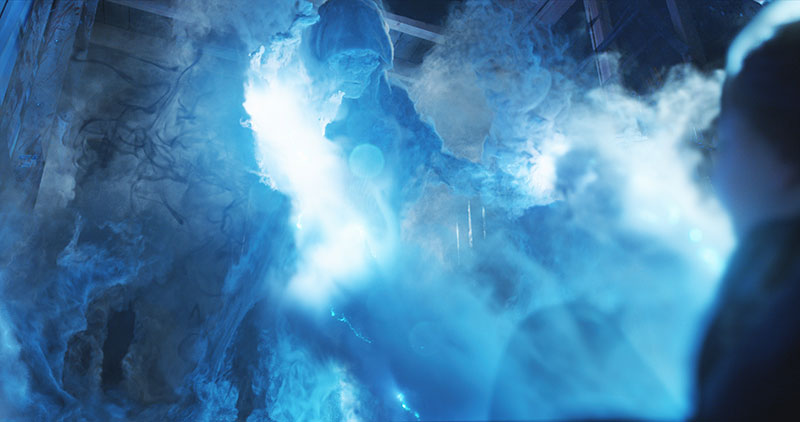 The third stage involved generating a series of different, separate smoke sims and then using deep compositing to push them variously into the foreground, mid-ground and background, altering the light and the shaders for each layer. All types of smoke were created – ranging from dynamic, high frequency smoke to less dynamic, lower frequency types, with a dry ice shader, a ‘cigarette smoke’ shader and others.”

Finally, all of these looks, sims and shaders were updated for each episode, revealing further detail about the character each time. R&D lasted throughout the season’s production.

Jeremy Melton didn’t only create concepts for the Crooked Energy, but also visualised other effects the team was responsible for, including those specific to Dion – the energy in his hands, for example, and his ability to teleport. Jeremy also helped them define the looks of the force field and detail it in ways that made it unique. While none of these would have been entirely new to audiences – teleportation, force fields and glowing characters are classic sci-fi and fantasy features – the Fuse team’s challenge was making their effects stand apart for ‘Raising Dion’. 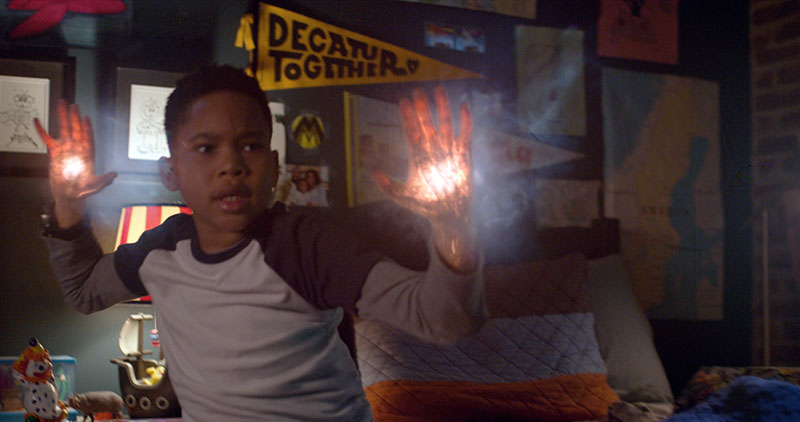 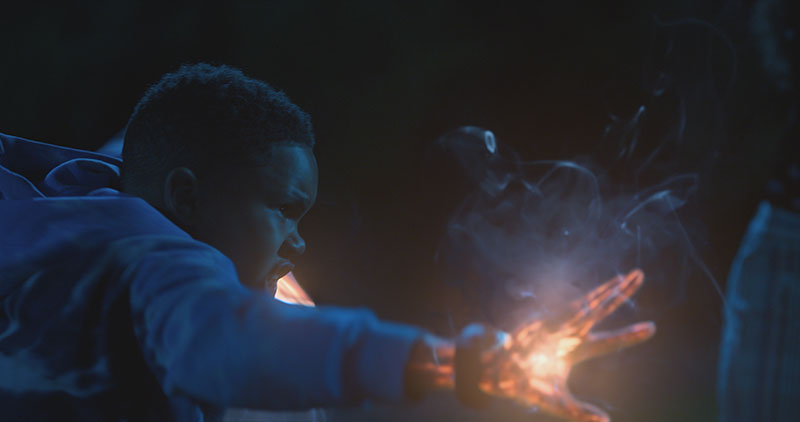 Dion’s plasma hands, radiating energy, were essentially a sub-dermal glow. The actor’s hands first needed to be tracked and matchmoved with the CG skeletal structure, which was rendered and composited as normal. A holdout was created for the glow, used to revealed the veins and pulses to the veins. These elements were created as Maya utility passes.

To produce the vapours and plasma trails associated with this look, however, noise passes generated in Houdini were used. Plasma was important as a unifying look across all effects for this series, and though not described outright in the script, plasma trails appeared through nearly every effects shot.

Teleportation relied on matchmoving as well, following pre-vis that was created to define where and how Dion was to disappear and re-appear in the plates. Their method used a special type of digi-double that could then be replaced with particles depicting the breakup of Dion’s body. This was accomplished with a series of passes. 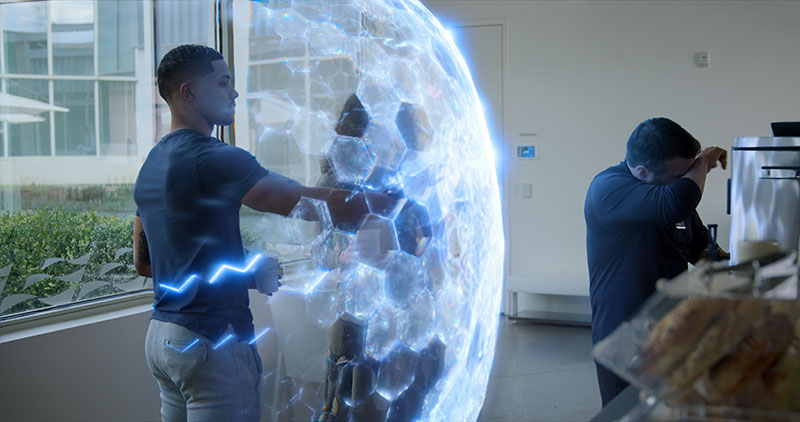 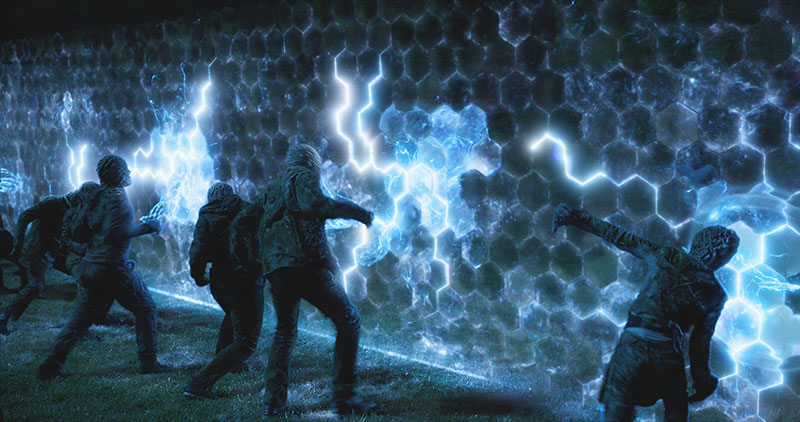 Using a ‘ghost’ figure placed in front of Dion, a particle simulation pulled colour from the source plate as the character disappeared. Not a visible element in itself, this ghost was generated as noise in the image and used as the particle emitter -- inside that, energy was visualised as utility passes from Maya for compositing. Then a similar ghost was placed in the spot where Dion was to arrive, but in this case it remained behind his body as he re-appeared. The overall effect could be made to look quite dynamic, even explosive.

The hexagon build chosen for the force field is another classic sci-fi look that Fuse treated in a unique way, with a reasoning behind its final appearance. As a crystal structure, it allowed them to play with the looks of the energy along the seams and make various types of swirling energy, created in Houdini, visible in each cell. This detailed approach meant a lot of work for the compositors, who needed to dial in and vary the looks and thickness at compositing time. But some of these variations could be optimised for the team, for example, optimising the swirl effects instead of working through the crystalline structure.

“As we worked through the looks and specific details of any of these effects, we always returned to Jeremy’s concepts for inspiration and our ultimate direction to preserve the main themes of the series,” Kevin said. 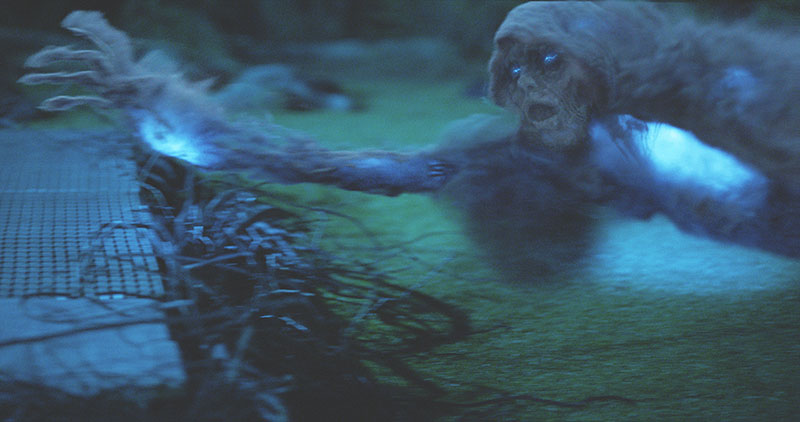 After one of the main characters disappeared in season 1, FuseFX developed an interesting sequence that returned him to the series in season 2. His body had been occupied by the Crooked Energy. The show’s protagonists fought and temporarily defeated the Energy, driving it away, but the character went missing as well. Fuse designed a complex sequence in one long shot that reconstituted his body over about 800 frames.

Building him from the inside out, Senior FX Artist Tyler Britton designed the sequence starting with the nervous system. The actor performed on green screen on wires but was recreated digitally as both a clean body and an intermediate body, with organs, which the artists could animate. For more control, they built their own 3D camera, blending it into the camera from the green screen shoot.

Meanwhile, layers and layers of smoke and lightning were generated, and as the body and organs took shape they were revealed either with a simulation or more noise passes. The Houdini sims for re-growing skin and the smoke were cached and sent to a Maya lighter to set up lighting for the body and clouds. The complex compositing work for the sequence was led by DFX Supervisor Dayna Mauer. fusefx.com