REALTIME VFX studio has completed its third season of Sky TV’s ‘A Discovery of Witches’, visualising the magic performed by the series’ main character and witch, Diana Bishop. As Diana is initially an untrained witch, a theme of the show is the development of her powers over time. To follow on from the VFX created for season two, the team’s new task was showing how much Diana’s powers have advanced since then.

REALTIME VFX Supervisor Sue Land said, “Diana’s powers are growing and therefore the magical content increases with each season. But the magic must always feel real and embedded into the nature of the show. This season we’re back in the modern era, so the VFX had to feel appropriate to the time and that of a confident, powerful witch.”

In Episode four, Diana stands in a narrow city laneway, experiencing a vision of Elizabethan London superimposed on top of the modern-day architecture of the set. Using reference of buildings from the city of York in England as inspiration, the team blocked out a model of the lane from matchmoved cameras, using ZBrush to add additional detail and ageing to the material. 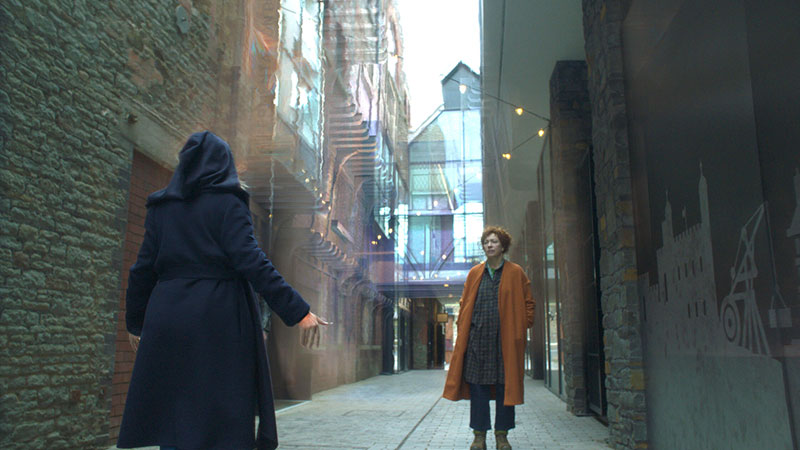 As a foundation, they used a set that had been built for the second series for reference. “While that set had already been dismantled, we fortunately still had access to a lidar scan of it,” Sue said. “Then all camera information regarding moves, lens, sensor area and so on, was taken from the filmed plates on location in the modern street and applied to our work, so the CG exists in the same space, viewed through the same lens.

“Using the lidar as a starting point, the Elizabethan Street was rebuilt to match the design of the modern-day street, so doorways and widows lined up. The proportions of 16th century buildings are very different to modern day ones, so great care was taken not to destroy the overall feel and charm of the old street. However, it was important that the two streets had harmony, allowing the transformation to be fluid and graceful. The goal was ensuring that the audience remembers the Elizabethan Street and not the transformation device.”

The CG was rendered for the entire duration of the shot. Because the pace and shape of the transformation needed to be flexible, the work was done in Nuke by projecting dynamic mattes over geometry of the street. Using the same camera data as the CG meant that the two sets of geometry could be lined up perfectly and the resulting mattes travelling over the geometry could be used to reveal the CG over the modern street.

When Diana needs to find the last page from the Book of Life, she casts a 'salt spell' to help locate it. REALTIME’s Art Department first developed a series of concepts to visualise the look of the spell, which the creative team then worked from. Red salt acts as a magical GPS as the grains travel over a map before forming the shape of a house.

This sequence was created using Houdini particle simulations built with target-seeking behaviour to produce the specific shapes the effect needed. The house was built using a volume-based modelling process. The team then rendered it with varying degrees of transparency to achieve the final look. 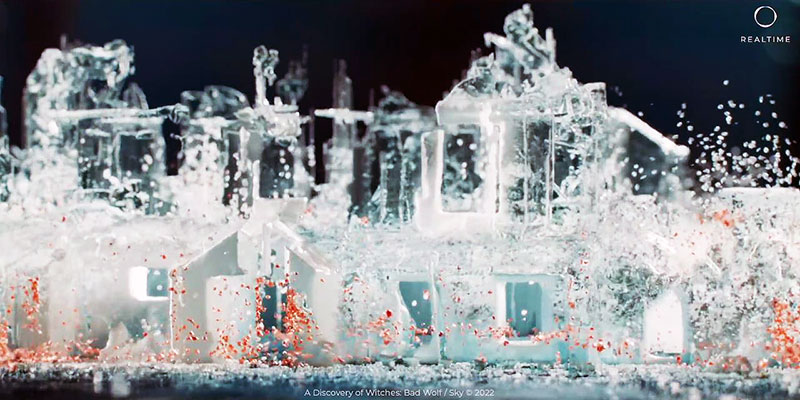 Sue noted that the concept work for this sequence started very early into the production and continued for an extended period. The shots needed to maintain a strong, clear visual narrative for the audience as there is no supporting dialogue, so a continuous creative process between REALTIME and their client was maintained throughout this evolving sequence.

The initial brief was reasonably detailed and included some reference stills. “But it came with enough latitude to allow us to explore a couple of creative options,” Sue said. “The constants were the two types of salt: the map and the house. Ultimately, it is a basic locator spell with a twist – the need to show very different scales as the spell zeros in on the location of the character T.J. Weston’s house. As well as generating all the concept stills, we played around with several FX tests to confirm the density, speed and look of the salt.”

Controlling the red salt separately from the white required two simulations. REALTIME’s Senior FX Artist Daniel Lloyd-Wood said, “Since the red salt needed to have personality, it was much more animated than the white salt. This was achieved using a curve-driven approach for the red salt sims, which allowed for fine grained control of the movement. Though the white salt was more simulation-driven, forces were applied to it from the red salt sims so that there was an interaction between the two types of salt.”

Meanwhile, a lot of target-seeking behaviour was required. Daniel said, “Our modelling department provided a model of the village which I then turned into a salt version using scattering techniques combined with differing point densities to make things readable -- for example, more points/salt grains for the houses and fewer for the fields.

“The same approach was used for the UK map, except that we used texture maps instead of a base model. Once I had this looking good, I used it as the target positions for the seeking behaviour. There were other target positions off the table mat and the simulation blends between these, so that the particles form the village. There was also a noise force and some extra behaviours such as stopping the seek behaviour when off the mat for some particles, all of which gave it a more natural look.” 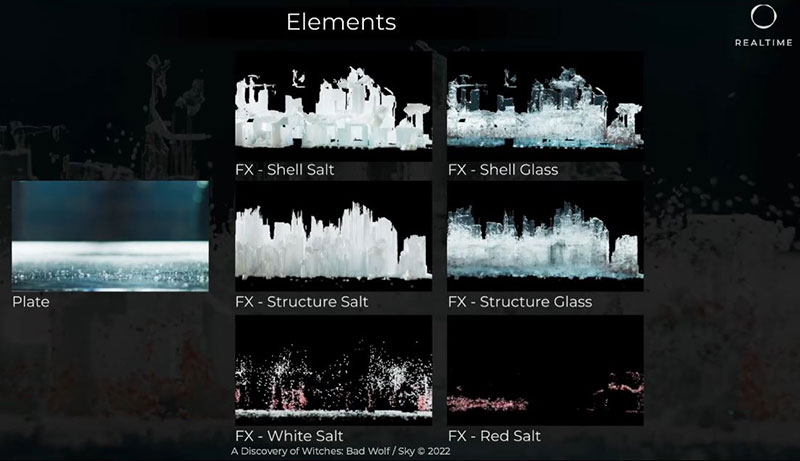 These elements were rendered with both a glass-like shader and subsurface salt shader. Daniel said, “We could then blend between all these elements in compositing to achieve the final look, which gave us a lot of flexibility. Overlaid over all of it were the salt grain particles which, again, used particle-seeking behaviours to attract them to the house as it was building. This gave the impression that they are actually forming it.”

Diana’s weaving spells, carried over from the earlier series, use magical, luminescent threads that she manipulates in her hands. Having inherited the threads from series 2, the technique and look had already been established to a certain extent. However, as the threads evolved in the new series, certain aspects of them were going to be entirely new. “For example, Diana finally ties the Knot of Ten, a powerful spell, and from that she creates her bow,” Sue said. “The threads are also used to strip the witch Satu of her powers. For these special scenarios, slightly different techniques were used, but we strived to keep the looks consistent.”

Graham Collier was Lead VFX Artist and described the combination of techniques used for the threads, allowing the artists to use simulations while maintaining control over the motion. “Our techniques ranged from matchmoving hand movement to ripple solvers and vellum curve simulations in Houdini,” he said. “Where possible, we started by tracking the camera and matchmoving the hands, then using this to trace points in 3D.

“Connecting these points gave us a base curve that was then blended over time into the more complex knot shapes. The base curves then went through a simulation process to give them a dynamic floating behaviour using the Vellum solver in Houdini. Extra ripples were added to these when more motion was needed, and blend shapes were also used when we needed more control over the shape. These curves were then used to deform more complex modelled threads, which wove together and had frayed ends.”

Creating the silvery luminescence of the threads involved transferring several coloured ramps along the points of the threads. These ramps were then animated to flow along the length of the threads, changing the colour and luminescence. These were rendered as extra elements along with diffuse and several reflection passes. The layers could then be dialled up and down in Nuke during compositing to create a dynamic-looking material. 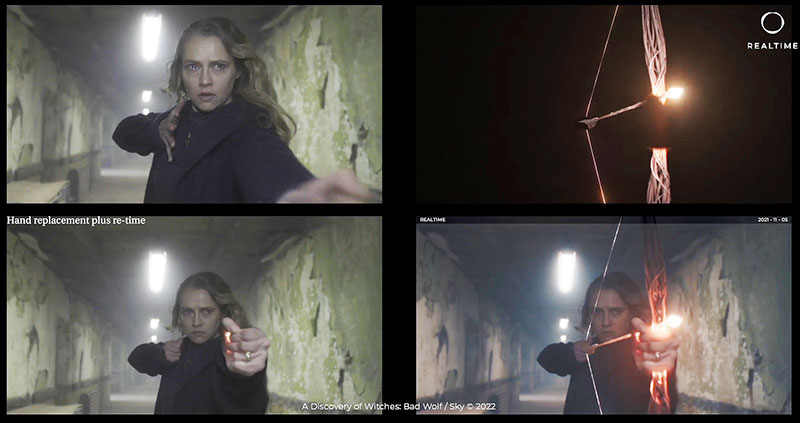 To coordinate the motion with the performance, it was completely reverse-engineered into the plates. “We went into it with a general idea, but the performance always has to lead the VFX,” said Sue. “This was a very emotional scene and the culmination of the Satu-Diana battle that started in Series 1, so the interaction of the two witches would always drive the scene and ultimately it did affect the performance of the threads.”

Perhaps the ultimate demonstration of Diana’s control over the threads is her bow, which gives them quite a different personality. Graham said, “Forming the bow first started as concepts, which were discussed with the client and eventually developed into a series of stills showing various stages of the bow formation. A 3D model of the bow was made to help with this concept stage.

“We knew that the bow had to form from the ‘knot of ten’ spell, which was in the shape of a ring. We started by trying different ways to blend these curves into the shape of the bow – it was important that it looked like the bow was forming from the threads. We went through several versions with different timings and also tried forming the bow from different areas of the ring of threads. We finally decided that the threads would form the string of the bow and the tougher threads would grow out from around her leading hand, flowing along the threads.” 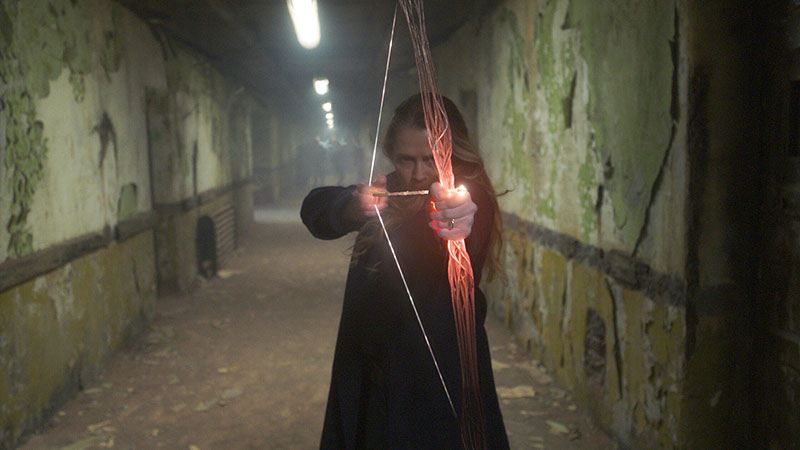 At this point, the team created a tool to deform clusters of curves into the shape of the 3D bow from which a high-res model was sculpted. The model was point-deformed to the curves, which blended between the knot of ten and the bow shape. Animated ramps were used to build geometry along the curves to create the effect that the bow was forming from the threads. Each curve had random offsets added to its length so that they would grow at slightly different speeds, and a few hero curves were added to to break up this effect even more.

“The curves were then rendered as threads and the 3D model rendered as a separate layer,” Graham said. “We rendered masks from the curves that were used to blend between the threads and the hi-res bow in comp. Extra masks were created for adding glows and other FX over the transition areas.”

“Visual effects are always best when they serve a purpose beyond just looking pretty, and this is particularly true with magical shows,” Sue commented. “Our sequences had to be handled with subtlety when often the temptation is to over embellish the magic and make it twinkle. We generally found ourselves paring back on what we initially thought would sell the shot to better serve the story.” www.realtimeuk.com