FilmLight Prelight Perfects Looks on Set for DoPs and DITs

FilmLight Prelight Perfects Looks on Set for DoPs and DITs 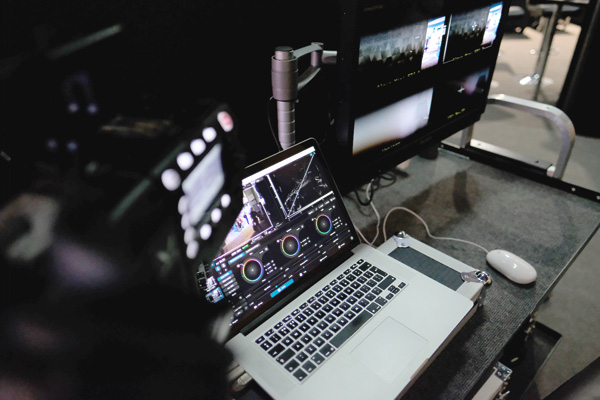 James Milne is FilmLight’s lead developer on Prelight, the company’s new looks authoring application. Here he talks through some of the principles behind the software, the motivation for its development and it relationship to the Baselight grading system’s colour science. Filmmakers, DoPs and colourists can use it to contribute to looks developed with the director in preproduction and to adjust it on set, and then apply the same colour data in post to finalise the creative grade across all deliverables.

The need for this kind of tool arose after broadcast and cinema production began shifting to digital cameras, when many filmmakers expected that it would be easy to monitor what they were shooting on video screens. They assumed the workarounds from the earlier days of film shoots – when camera output had to be modified and fed into a video assist that would give directors and DoPs some idea of what they had just shot – were gone.

But on-set monitoring has remained fairly complex, mainly because digital cinema cameras shoot with far greater dynamic range than can be accommodated on a video screen. “The camera output alone looks very flat. To achieve a viewable picture, a mathematical transform that converts colour values in the camera’s raw format to colour values in the display format, must be applied to the signal. Because the processor uses a look-up table (LUT) to perform the transform, by now most everyone involved in production and post has become familiar with the idea of the LUT,” said James. 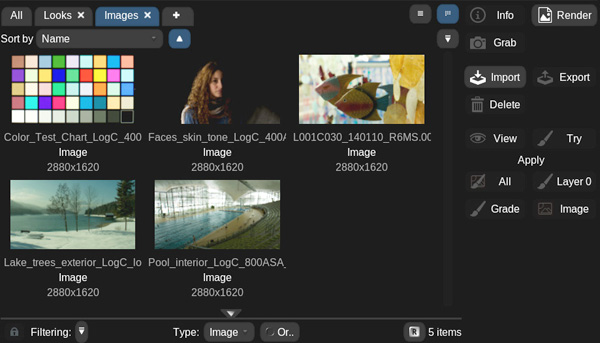 “The other huge shift from film days, when colour controls were limited, is that LUTs then moved on from a simple transfer device to a major step in the creation of the look of the movie. Moving ahead to today, this look is created in the grading suite by a colourist using dedicated software like Baselight.”

James also explained some interesting ways in which these technical developments have changed the role of the DoP. DoPs often shoot reference stills in the pre-production stage of a project. Using Photoshop or similar software, they will modify these images to achieve the grade the director is seeking. These images are invaluable tools, yet they are often used simply as visual references that then have to be recreated from scratch in the grading suite.

Behind Lights and Lenses

He said, “Once production begins, the photographer’s craft is in using light and lenses on set to make pictures that underline and drive the story forward. These skills are what make cinematography art, and not a YouTube video, and to be able to develop what lies behind those dramatic pictures, the DoP needs to be able to see something on set that is quite close to the finished image. But the danger is that this comes at the cost of getting too involved with the colour science, which may take them away from their primary objective. While the DIT can help a little, they too have a demanding role in data wrangling and do not necessarily have skills or knowledge in grading. 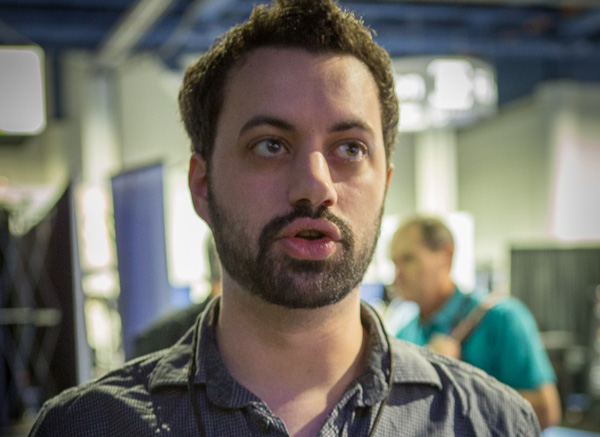 “FilmLight believes that, rather than just imposing a LUT on an image so the DoP can see that it is framed correctly and that there are no serious lighting errors, what would be ideal would be a way of setting a look visually on set - a quick, simple technique that can be used without specialist knowledge of colour management,” James said.

“DoPs would also find it very useful to have a means of capturing the underlying colour transformations in the original reference still, and then applying them precisely to their camera output in real time. As well as matching the scene to the pre-visualisation as it is shot, the grading information could be saved and delivered to the colourist upstream, as the foundation of the grade.”

The director, DoP and colourist working on the look of the movie in pre-production could constitute another workflow, perhaps supported by a series of test shoots. At that point, the colourist, supported by the post house’s colour scientists, can define the LUTs to be used, and set some basic looks. In the same way as reference stills, these can be used on set so that the video assist output of the camera has the foundations, at least, of the finished grade.

To achieve this, consistency in the way that the grade is imposed is essential, as well as some degree of control over the display devices, so that the production can make a reasonable comparison. James sees little value setting a look on set if the monitor you are using has a very different performance to the final projection. Similarly, setting instructions on set is of no use if there is no way of guaranteeing that they will be precisely carried through to the final grade.

He noted, “The ASC CDL was an initial attempt at making a portable format, but in truth it is a limited set of instructions. In practice, it can serve as a brake on creativity rather than informing your workflows. Nevertheless, a complete and accurate capture of grading decisions from the camera to the final deliverables is vital.”

FilmLight’s approach is to use a common file format, oriented to the colourist, that describes every aspect of the grade. This format, named Baselight Linked Grade or BLG, has parameters describing not only colour decisions but also windows, vignettes, shading, position and the other tools colourists use. It operates on the basis of cumulative metadata – that is, nothing is baked into the raw footage until the point of rendering the final deliverables. Any decision can be altered or rolled back at any time before that. 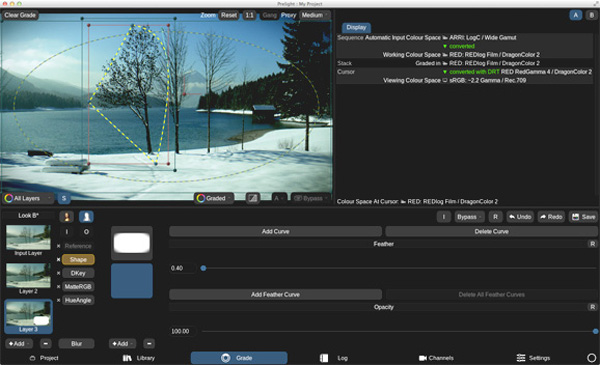 To make the BLG’s information accessible to DoPs and DITs on set, FilmLight has wrapped its colour science and the format into the Prelight software package. This has the grading tools and colour science of Baselight but is built with a simpler UI so that it can be used on set without interfering with the shoot.

There are two versions. One – Prelight – is a free download, a simple version that gives the DIT the ability to load looks and tweak the grade using stills. The complete Prelight ON-SET version puts many more grading options on set. First, it applies the look to the camera output in real time, either through an external device or, in the case of cameras like the ALEXA SXT, in the camera itself. Because it incorporates all of the Baselight colour science, it can impose one transformation for the display device, such as a HDR screen for playback on set, and another for the HD output, so the material going to editorial also looks correct.

Once connected, the DIT and DoP can do as much or as little as they want. They can simply accept the LUTs and any looks pre-set by the colourist. They can choose to match to reference stills. Or, if they want to, they can adjust the grade, using either on-screen controls or a basic grading panel plugged into the computer. 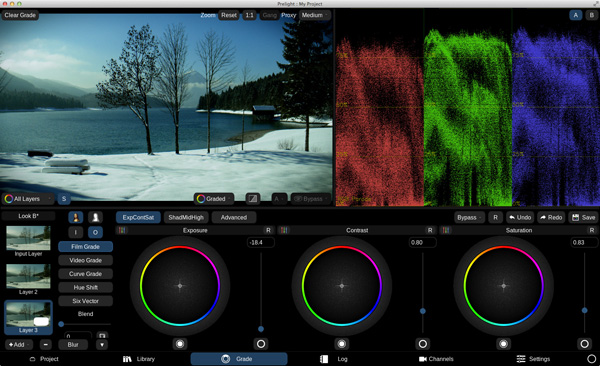 “Similarly, the basic functionality can be performed on a Mac laptop, or a more powerful computer can be used to give access to all functionality,” said James. “The DIT’s notes on the shoot can be added to the Prelight timeline for transfer to the post pipeline. The people using the system have the choice on how much functionality to use on any given project.

“Essentially, these tools and options give reassurance and, if desirable, control to the DoP that what is coming out of the camera at the point of shooting will achieve the right look. Furthermore, neither a skilled colourist nor any knowledge of the underlying technology is required. The package allows the DoP to focus completely on realising the vision in a straightforward way.”

Prelight is aligned with the new Baselight 5.0 colour tools, which means that users have access to the Base Grade, a new primary grading operator for colour workflows and HDR, as well as other colour tools such as midtone contrast and gamut compression.   www.filmlight.ltd.uk