Jin-Ho Park is senior colourist at Cinemate in South Korea and has worked on almost 200 films in the space of 14 years. In that time he has taken an experimental approach to grading and pushed the scope of his role as a colourist. Here, he talks about his career and steps through the decisions he made and the tools he used on the BAFTA award-winning film 'The Handmaiden'.

He spent the first part of his working life as a graphic artist and started working in colour in 2004 just after taking a job at Sebang Film Lab in Seoul. “I was trying to build up an internal VFX team in the lab when the first FilmLight Baselight system was installed. I trained myself to professional level proficiency on the grading desk in my spare time,” Jin-Ho said.

He was using a very early version of the software, Baselight 1.0, and grading images scanned from film. He learned the colour grading language through Baselight, right from the beginning, and loved being able to sit and work on a grading panel in a DI room that was set up in exactly the same way as a theatre. When he touched the Blackboard trackballs, he could change each RGB colour to whatever was required.

“To me, it felt very similar to digital palettes for moving images. Now all the footage is imported from digital cameras, but the work processes are consistent and still impress me. The panel is so tactile that whenever I see the trackballs I want to move them, even in my dreams," said Jin-Ho.

“Within Baselight, being able to mix the main UI, the timeline and the layers in colour grading work is a big advantage, I think. It is easier to grasp at a glance, easier for communicating and cooperating with the DP. Of course, Baselight ‘undo’ is also very powerful. Because you have a persistent, unlimited undo/redo system where you can access all operations, anything can be restored at any time.”

Group, copy, move, trim and delete functions in Baselight make it fairly easy to preview, manipulate and navigate the timeline. Baselight will select contextual timeline elements automatically, or you can copy and paste elements selected from the source into the current timeline. As well as previewing, Baselight gives an EDL-style view of the timeline, to which you add marks with notes to help navigation and communication. From there, the timeline can be sorted in various ways.

Other elements of the software support visibility and communication, starting with the ability to view the same UI from multiple monitors. Grades playback in real-time, with automatic caching, and there are multiple-view modes for viewing several cursors - variables defined to retrieve colour data from the database - simultaneously, while keeping thumbnails of shot output and mattes in the layer view. Graded stacks are stored in a Gallery for each user or job, and several galleries can be open at once. From the Gallery, you can drag and drop grades, and store and retrieve grade settings.

With the hindsight of 14 years' experience, Jin-Ho said he has watched the role of colourists change over the past decade. “In the early days, tone matching played an important role in this field. Now the emphasis seems to be more on carrying out tone matching with more incidental creative colour,” he said.

“Furthermore, it's interesting to consider that Korean film production is still significantly behind the Hollywood system, so much so that it is impossible to shoot with perfect settings on location. The result is that lots of cuts depend on CG or DI for at least part of the image. In the past, if the emphasis was on getting the look right on set and in camera, it seems that now, demand for fixing and manipulating the colours during post production is increasing.”

While 200 projects is a very large number of films to have worked on, he starts every project with a fresh mindset and is always aware that he is just one member of a movie project among many others. Every time, he also appreciates the trust placed in him when filmmakers hire him.

In the midst of a steady stream of mainstream Korean movies and TV series, Jin-Ho worked on 'The Handmaiden', directed by Chan-Wook Park and the first Korean production to win a BAFTA award for best foreign language film.

Inspired by a novel set in modern times, 'Fingersmith' by Sarah Waters, the director transposed the book's story to colonial Korea and Japan in the 1930s for his movie. 'The Handmaiden' is about a young Japanese lady living on a secluded estate and a Korean woman Sook-Hee who is hired to serve as her new handmaiden, but who is secretly involved in a criminal plot to defraud her of her inheritance.

Jin-Ho, who had worked on several movie projects with the director and his DP Chung-hoon Chung since he was a junior colourist, was hired to create the film's mood and colour. His experience gave him the chance to join in discussions at the pre-production stage, and this advance knowledge gave him the time to test and adjust the camera and lens characteristics that the DP had chosen.

He said, “Chung Chung-hoon used the ALEXA camera and vintage lenses to try to create the feeling of Joseon during the Japanese occupation of the 1930s. In recent years, many movies have used very similar digital camera and lens combinations. In the case of 'The Handmaiden', the ALEXA was combined with a Hawk 74 Anamorphic lens to create a distinctive look in terms of texture and aspect ratio. I now feel that this combination can reproduce the texture of film in the digital age more accurately than any other I have seen recently.

“Consequently, in terms of aesthetics, I tried to tread a line that wouldn't harm that texture or look, but I made the overall tone dark and cold to represent the historical background of suppression associated with the Japanese colonial period, and the pitiful human relationships of deception and exploitation. I lowered the overall saturation, and then desaturated the reds and blues further by using Dkey. To maintain the under saturation throughout the movie, I also graded more intimate scenes in a similar way.” 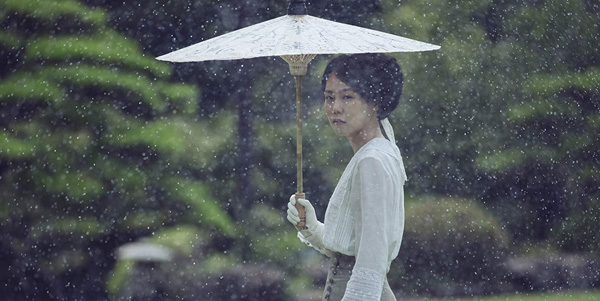 He uses Dkey quite a lot, independently or alongside MatteMerge or other tools, and it is one of his favourite Baselight tools. DKey's interface is a three-dimensional keyed function, designed for carving out a region of RGB space in order to create a custom matte for secondary work. You drag a bounding box over your thumbnail to sample it and isolate the most useful range of colour for a targeted operation. Once you have created a matte, you can switch back to the grading tools and make adjustments.

The colour grade was completed in two weeks, but it took about four weeks to wait until the visual effects cuts were finished and returned for the final grade, when Jin-Ho completed such story-related tasks as changing the red brick to gray in the Seoul asylum.

“But the real challenge was to express the wet and humid weather after the rain,” Jin-Ho said. “It was difficult to recreate the sense of a wet, muggy atmosphere on the screen. To do that, I found it really useful to mix several grades in one stack. It meant I could catch a thought and create it immediately before the idea disappeared, and then blend it into the overall grade.”

Jin-Ho talked through several of the scenes in the film that relied on the grade to express the mood of the story. For example, below, the first scene shows a very overcast day. He said, “In CG, storm clouds were added in the sky and then in the DI, I removed the warm tone of the original footage to better express the cloudy day. To make the tone of the characters colder, I removed the yellow colour and added blue that is close to white.”

This film required Jin-Ho to collaborate with the CG team on several other scenes as well. For example, in this establishing shot, we see a wide view of the story’s countryside palace. CG was used to add a little cloud as in the first scene, and he added a slight sunset mode to create the two different tones in the sky.

“My work on the scene in the library basement (below) involved moments when the Count was smoking or not smoking a cigarette while in conversation with the character Kouzuki. The CG team added the smoke source, and I then added the green colour to it and gradually revealed the smoky basement environment," he said.

“In the Seoul asylum scene, the director wanted to change the red brick wall into an achromatic wall. Because the wall surface made it difficult to make a key to separate the wall and the actors, when I finally graded it on the big screen here in the grading theatre, I was working with mattes from the CG department, which needed a lot of work from their team.”

Apart from the film-like look the Hawk Vintage 74 Anamorphic gave the images, it was also impressive as a way to stylise images by zooming in and out deeply, and to allow the camera to show the depth of field and image texture. However, one disadvantage of this lens is that in a wide zoom shot, the focus is distorted on the edges and in the corners. In the mask area shown below, blurring is strongly applied everywhere except for the centre of the frame, and the focus is soft.

He said, “I actually tried to give the images sharpness by using the software's fast tracking and keyframing tools together around the eyes of the actor. But in such a wide view, it just wasn’t possible to focus on the upper part of the heroine, even when raising the sharpness value of the whole image. Despite these disadvantages, the filmic texture is fascinating.”

The skin tones of the actors were fairly pale to begin with, which Jin-Ho took advantage of by grading the face of main character Lady Hideko to be expressed in pure whiteness throughout the movie, because she was trapped in the palace. “In contrast, I raised the skin tone of the maid Sook-hee a little, because she could spend more time out of doors than Hideko. The Count’s skin tone was desaturated because the actor’s original skin tone was naturally strong already.

"In the scene below, Hideko and Sook-hee are talking about their mothers. In the middle of their stories, the sun was covered by dark cloud. Before and after the dark clouds cover the sun, I showed the weather change on the two heroines through brightness and colour tone.

“In the Palace's back garden, the Count is angry with Sook-hee in this scene. I reduced the brightness of the surrounding tree-lined garden to concentrate on the two characters.”

At the end of the story, Hideko and the handmaiden run away from the palace for their freedom. These cuts reveal a temporal change from the moment they run away over the wall to the moment they run across a wide field. The two women continue running toward freedom from the dark night to the coming dawn. The grade involved adding the feeling of the sunshine by separating the key of the characters and the field.    www.filmlight.ltd.uk