'Dumbo' from Camera to Post – ARRI, Codex and DaVinci Resolve 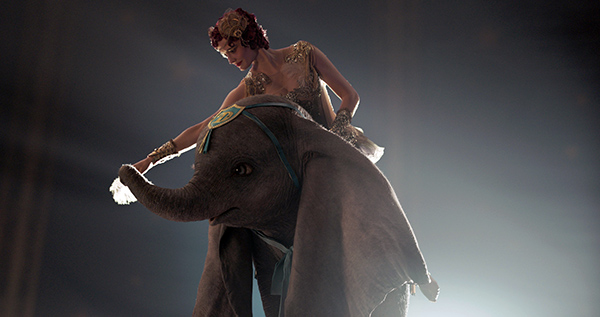 Director Tim Burton, director of photography Ben Davis BSC, VFX supervisor Richard Stammers from MPC and DI Colourist Adam Glasman decided early on, before the shoot, that producing the story of 'Dumbo' as a live action movie would need a look that falls outside of precise photographic reproduction.

Because the film centres on a CG baby elephant with exaggerated eyes and facial expressions, its world could and should express his subjective reactions to what happens to him. This approach extended across the production, affecting choices in the design of the effects, lighting, sets and costumes.

Ben Davis shot 'Dumbo' mainly with the large format ARRI ALEXA 65 camera and ARRI Prime DNA lenses. He chose a 1.85:1 aspect ratio to better frame the Big Top and the elephant. The ALEXA 65 uses an A3X CMOS sensor to capture at 6560x3102 resolution in Open Gate – an image roughly equivalent to the 5-perf 65mm film frame. The uncompressed ARRIRAW files are written to Codex SXR Capture Drives, which were offloaded quickly, at full resolution, to the Codex Vault XL workstation by DIT Tom Gough. 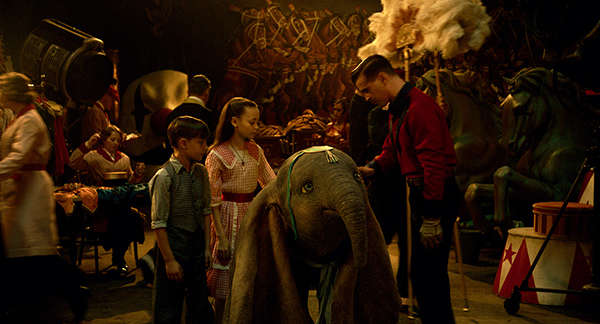 The ARRI Prime DNA lenses use vintage glass from various sources and time periods to achieve a warmer, softer feeling in video. Concerned less with optical consistency across focal lengths, the DNA series is handpicked, tuned and re-housed to add character, emotion and a distinctive look to digital productions. The individual lenses often display unusual characteristics.

Ben said that in spite of the huge amounts of data, his digital workflow is solid and smooth. “It has taken a while for digital cinematography to settle itself,” he said. “There were a lot of problems initially with discrepancies between what the camera team was seeing and what was being delivered to visual effects departments and editorial. Now, that’s much less of a problem.”

Richard Stammers said, “Digital cameras have made the VFX process simpler, even though we still strive for the look and dynamic range of film emulsion. But what probably makes the biggest difference is the level of detail, sharpness and clarity that captured images now have, with almost no generation loss of quality due to copying or transcoding data through the process of the digital effects pipeline. What you end up with on screen can be nearly identical to what’s captured. 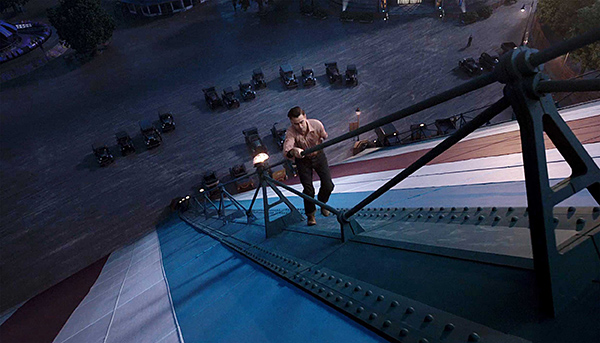 “Despite the technical advances, the way we composited shots 20 years ago is not hugely different from what we do now. The tools may allow the artist to work quicker and more efficiently, but the processes are still very similar. I think we’re just able to do better work with better capture and carry through the process right to the end without diminishing what was captured on the sensor.”

Ben uses only one LUT, which represents a single film stock, and doesn't grade or create any CDLs on set at all. He also lights the sets and exposes the sensor literally according to the look he wants to achieve. Instead of getting involved with DIT processes, he stays on set with the camera, more like a DP shooting film, where he can enjoy watching the actors work. “The dailies colourist balances under my instructions,” he said, “and we view the rushes in the morning through a projector, which I find much more informative and inspiring – seeing it in the format that we’re aiming for in the released movie.”

As Above, So Below

Ben and Richard worked together on the distinctive skies that appear above Dumbo’s world. Most scenes take place in exterior situations, but were almost always filmed on stages at Pinewood Studios, where the elaborate sets were constructed against blue screen backgrounds. The MPC team shot about 300 sky domes, many consisting of 90 tiles stitched together. The combined HDR stills comprising these 360-degree sky domes resulted in the equivalent of about 50K resolution. 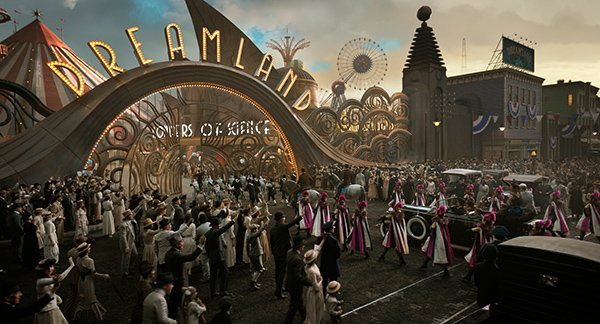 In some cases, the skies were augmented with composited 2D cloud and colour elements or matte paintings to give the necessary storybook feeling, but taking care to harmonise with Ben's lighting design. In some cases, the effects artists showed Ben live composites on set as he lit and shot, which both reassured the DP and helped the effects team choose the right sky.

The integration of fully CG skies was crucial as a way to reflect the painted backdrops of the original animated movie. Using a Blackmagic Design ATEM Television Studio HD switcher as part of the DIT workflow, the team was able to key in several different dramatic sky reference images that Ben had shot during pre-production, together with a live feed from the camera. With ideas from Tim, these were then used to design the lighting and mood of the entire set.

Colourist Adam Glasman at Goldcrest Post delivered the DI, collaborating with Ben Davis before the shoot to define the warm, golden-hour period look for the film using an ACES workflow in DaVinci Resolve. Inspiring their look were the layered colours of the production design in the original cell animation, which was then finished in 2K to enhance the soft, film-like quality of the rushes. 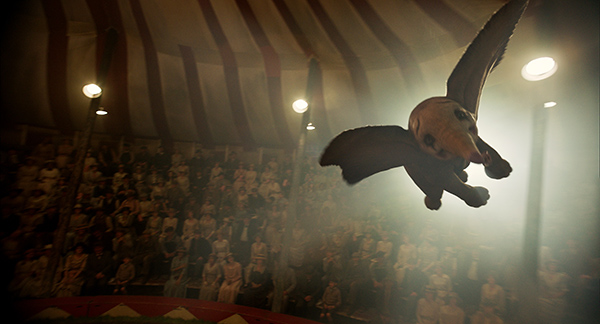 The main set was the theme park where Dumbo lives. The sets were massive, enlarged on screen with set extensions created at Framestore. Their team, under VFX supervisor Hubert Maston, gathered a large set of HDR LIDAR scans of the practical sets and lighting setups, plus lens, exposure and other metadata captured by the ALEXA 65 camera system and recorded with the video. ARRIRAW image files contain a lot of image data that is extremely useful when compositing scenes and helps create an invisible blend between 3D imagery like Dumbo and the captured backgrounds.

“The ALEXA's image data definitely plays a part in how flexible we are when we actually do the visual effects work,” Hugh said. “It also plays a part in what we can actually do to enhance a plate. If it has a very wide gamut, we can do more.” As a consequence, he feels that denser camera data has also increased VFX teams' efficiency and contributed to the rapid expansion in the use of visual effects, even within the same budgets and time frames.

“The volume has definitely increased,” he said. “With the increase in computing capacity, a lot of other possibilities have opened up. We can use models for lighting and rendering that we simply couldn’t use before because of computing limitations. We have more effective ways to use the data that comes from set. For example, HDRIs help to recall the exact state of the light on set, and we can create realistic materials to better simulate the look of an object. 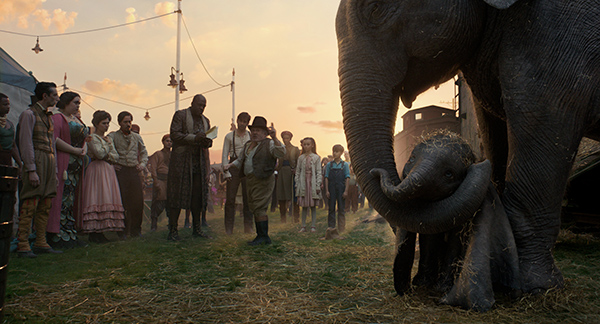 “In the past five or ten years, artists have shifted from an improvised, project-by-project rendering approach to methods that rely on physical material and accurate translation of light. Equally important is the ability to manage, organise and store the tremendous amounts of data that we create – literally terabytes each day – to make it more useful over time and to make sure that data flows are efficient.”

Codex's specialty is data management for filmmakers. The Vault XL workstation the DIT was using is based on the Codex Media Vault networked storage, a small workgroup device with a remote monitoring Web GUI for administration. It is compact and portable for use on set or in facilities and can support multiple users working concurrently on high capacity formats, who need to have files available on demand.

Connectivity is designed to share files quickly over the Vault-XL's 40GigE network to desktops - supporting multiple users and workgroups. A dashboard monitors system configuration and status, and it has an 850GB cache, a data transfer rate of up to 1,000MB/s write and 900MB/s read, with 2-drive parity redundancy. 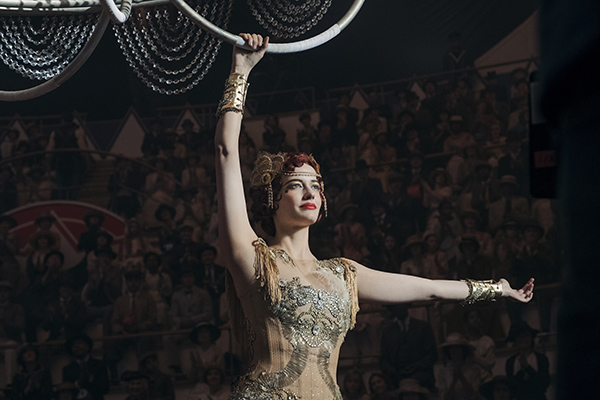 As a parallel processing appliance, dailies can be generated faster than real-time, with multiple LUTs and burn-ins applied. Its removable transfer drive bay means it can be set up in fairly inaccessible locations, using the Codex 8 TB Transfer Drives to safely move data from on-set to near-set or a post facility instead of handling the device itself. It also houses Vault Review, a 2K/4K player, QC tools and LUT pipeline for look management, and a look library.

The post-production team needed to cater for a variety of different deliverables, including Dolby Vision 2D/3D, SDR 2D/3D and both HDR and SDR Rec 709. This was especially important for the Dolby Vision deliveries. Adam said, “The CG skies especially look amazing in this version. If you compare a traditional DLP projection at 48 NITs to the Dolby Vision at 1000 NITs, you instantly notice the far wider colour gamut you are seeing, with more added dimension. The sky is just as bright as it would be in the real world, so you have to treat it very sensitively.

Codex Production Suite is the dailies production and archiving software for Vault-XL, with tools for non-destructive primary colour grading and LUT management, QC, metadata editing and audio sync. Users can manage and create all their deliverables within the one system, including transcoding to formats including Apple ProRes, Avid DNxHD and H.264 , faster than real-time, even with an input LUT, CDL and a 3D LUT. It will also handle debayering to DPX and Open EXR for VFX deliverables. 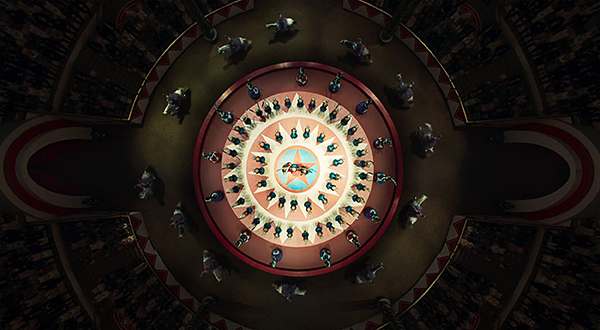 Through the Suite, you can import, create and modify looks, and communicate them through to editorial, final colour and post. CDLs and LUTs can be imported and processed so that externally created looks can be applied, either overall or shot-by-shot. These looks can be baked into the editorial dailies or appended in the metadata information for other deliverables. After checking, fixing and appending metadata, it can then be attached to dailies to improve efficiency in post.

Adam said, “Tim was keen to keep a good level of contrast in everything to help integrate the computer generated assets with the background. The VFX team at MPC were given references for how a scene would probably look and lit their CG accordingly, so I had to be very careful not to spoil that.”

Beyond developing the DI to maintain the integrity of the images, Tim also wanted to take advantage of opportunities to experiment with colour. “Tim’s genius came to light in a scene with Dumbo’s mother in a cage, with a strong red light on her,” Adam commented.

“We had a collection of animals dressed up as monsters in the cages surrounding Dumbo’s mother, and Tim just decided we should give those other cages strong colours too. I had a lot of fun making each monster a different hue, from bright green to ultraviolet. It adds to the scene. Between the production design, cinematography and Tim’s vision, the whole film is visually remarkable.”  codex.online