Andy Elliott is one of the founders of Directors Cut Films in London, as well as its Senior Colourist. Most of the studio’s work is long-form television but, with a flexible team on board, they also work on drama series and feature films, and the occasional commercial project. However, documentary is the genre in which they have earned their strongest reputation.

As a post production specialist, Andy has worked as an offline editor, then an online editor, and has now been grading exclusively for over 10 years. He works across all genres, and completed Directors Cut’s first 4K drama feature in late 2018. He graded the documentary ‘Basquiat: Rage to Riches’ (2017) for the BBC, earning a BAFTA award, and two of the winning programmes in the 2019 Broadcast Awards, including the ‘The Fight for Mosul’, also an Emmy award-winner.

Due to Andy’s wide experience in documentary and drama productions, from the positions of online and offline editor and colourist, he is able to orchestrate very efficient outcomes for clients’ projects, both technically and creatively.

Andy actually started his working life as a labourer on a building site, and escaped to become a runner and tape operator. “That escape gave me the chance to learn editing. I began as online edit assistant, then became an offline editor and later on a freelance editor,” he said.

“With some colleagues, I started the editing facility Directors Cut Films in London’s West End in 1999. As a company owned and run by editors, our team felt we knew what was required to match the expectations of the post-production marketplace. Our post-production services began to expand, and we soon recognised that we needed to make dedicated grading facilities available. Having always been fascinated with grading, I took the opportunity to become a colourist.

“I enjoy working on documentaries because they give you so much to do. I have worked on a 45-minute programme with 2,500 shots, from maybe 10 or more different cameras, all set up differently. Making them match and also giving them a strong look in a single day’s grade is a real challenge. When I did my first proper BBC drama series, I was astounded to see that the raw footage came in well-lit and already matched.”

Andy is usually involved in a project ahead of the shoot, and discusses the cameras and lighting with the production and crew. That also gives the production the chance to talk to him about the workflows and any VFX that may be needed. 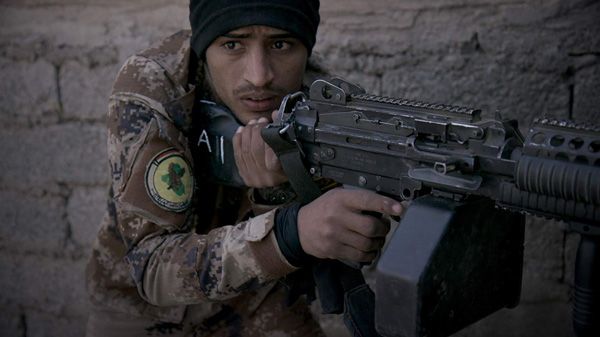 ‘The Fight for Mosul’

Similar to a drama, the final look of a documentary may have to be quite different to the look of the material as shot. Andy recently graded an episode of the documentary series ‘Dispatches’ for Channel 4. Titled ‘Britain’s Hidden War’, the episode is about British technical support keeping Saudi planes in the air despite the numbers of Yemeni civilians being killed in Saudi Arabian airstrikes. He and the director watched the film and together set looks for each chapter in the story.

After listening to the director’s view on what he thought the film should look like and how the archive material should be integrated, from there, the director left the project up to Andy. “Overall, I felt the look should be real, but not too ‘happy’ – it was a dark subject, even though much of the material was shot out in the desert sun.”

Some other interesting projects passing through the studio recently are ‘Everything is Connected: George Eliot’s Life’, made by artist Gillian Wearing who is a Turner Prize-winner, and ‘Climate Change: The Facts’ with Sir David Attenborough.

Andy works on FilmLight's Baselight grading system, and Directors Cut has just installed version 5.2 of the software. “I generally start off using Film Grade and Base Grade to set up the basic look," he said.  "I use tracking a lot for masks used in handheld footage where, say, you want to add a vignette that follows the camera movement naturally, to keep it from looking like a stuck-on effect. I’ve also come to like Texture Equaliser as a sharpener.” 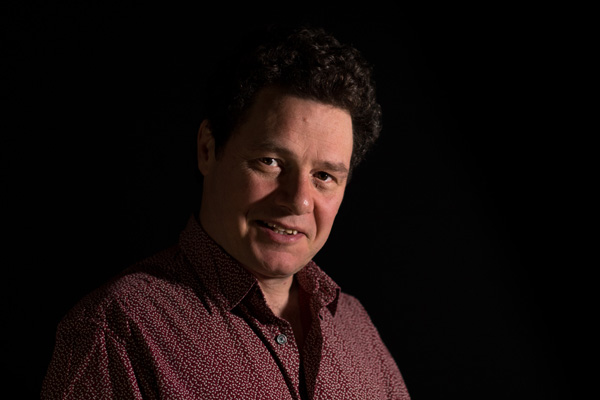 Film Grade, mainly for log encoded data, adjusts the picture through six variables organised into two groups - Exposure, Contrast and Saturation, plus Shadows, Midtones and Highlights. Base Grade works the same way in every working colour space and therefore, for the colourist, transcends the model of camera used to shoot the material. Base Grade converts the image into a linear colour space in which the original brightness ratios of the scene are restored

Texture Equaliser divides the image into individually adjustable spatial frequency bands. The colourist can apply any colour grading operation to the bands and, depending on the level of detail, keep fine control over the interaction of colour and texture. Each frequency band has a separate Texture Blend control allowing a smooth join between two images with a sharp-edged matte. Meanwhile, you can use the tracker with Texture Equaliser as you work.

In a wider sense, Andy likes the look and speed of Baselight and, in line with his editor’s background, the renderless AAF workflow between editorial and grading for Avid projects. Work done in Baselight for Avid, a real-time AVX plugin, is saved within the project and can be embedded in an AAF file. Layers of colour, grading inside and outside mattes, feathering, point tracking and area tracking and other elements remain live and interactive on the Media Composer timeline. The grade can be exported from Baselight and imported into Media Composer without rendering.

This workflow is bidirectional - the grade can be changed in Media Composer and exchanged with a Baselight system, with the edits intact. As well as using modified AAF files to exchange grades, Baselight for Avid supports the FilmLight BLG file format. 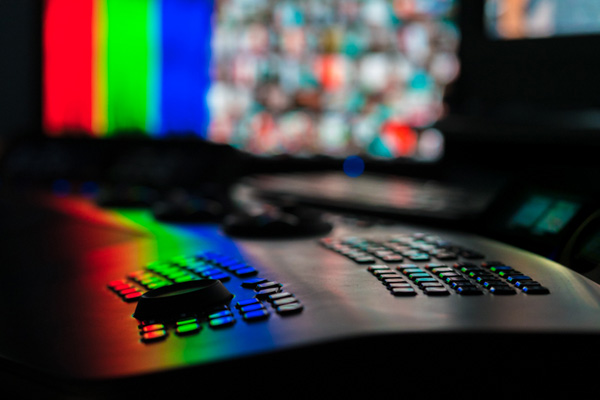 For Andy, the AAF workflow comes into its own at the end of a grade. “It is so much faster and efficient than rendering new media. The online editors can load the grade immediately and because the grade is not baked in, you can continue tweaking it, infinitely if needed. So if an additional piece of interview comes in, for example, the grade can be lifted from a previously graded shot and dropped onto the new one in the online timeline. This is especially useful in current affairs programmes that are cutting right up against tight transmission deadlines.

“I also think the end result is significantly better with Baselight. The speed at which I can get through a film has improved which, in turn, gives me more refinement time in a given booking slot.”

With his own business to keep functioning, he realised some time ago that to be really dedicated, he couldn’t manage and grade at the same time. His trusted partners do most of the company management, while he tries to focus solely on grading. He said, “We have regular catch ups, but when it’s really busy it can be 7 days a week and long hours. You can’t stop to manage in the traditional sense because your client would feel annoyed.

“As mentioned, I try to be 100% focused on the grade, however large or small the job is. I make sure the client is happy with what they see if they are unable to attend the grading session. One can interpret the descriptions of looks differently, so I like to discuss the look of a project by actually seeing it on the screen with the client and then agreeing the way forward. I will discuss the editor’s thoughts too, and together with the online editors, I will discuss the workflow and any issues that may be involved in achieving looks that may, for example, incorporate a lot of effects.” 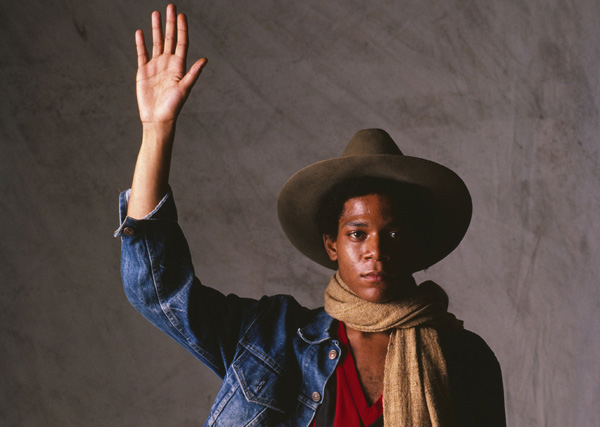 Directors Cut recently updated their grading room with a new Baselight TWO workstation and Blackboard 2 panel, effectively preparing it for HDR and 4K. “Not only do pretty much all of the programmes that are cut here at Directors Cut go through Baselight for their grade, but currently we are also working on an HDR version of ‘The Runaways’, a feature film we recently completed. For me, HDR produces a much more positive visual impact on the viewer than, say, going to 4K. It makes a big difference, but subtle too, with real benefits regarding the enhanced immersive experience for the viewer.”

As Andy sees his role as a colourist, however hard he works at it, having a career involved in filmmaking places him in a privileged position. He has held some fairly rough jobs before he found his way into this industry, and at one stage he could see no pathway into a creative career.

Andy’s interest in all art forms is growing as he gets older, and any artist that produces something can win his admiration. A piece of architectural design is as capable of leaving a deep impression on him as a painting or a piece of music might do. “What interests me most is light,” he said. “I’m a very keen photographer. I used to look for good pictures to take, and now I look for light. I suppose you could say that the artists that have inspired me the most are Turner and Rembrandt for their treatment of light.”   www.filmlight.ltd.uk