Naotaka Takahashi is a Senior Colourist at L’Espace Vision in Tokyo. Throughout his career, he has graded a number of award-winning commercials and several feature films, but at the time he joined the studio in 2000, L’espace Vision was mainly involved in offline editing, using a proprietary multi-editing system.

“As I had studied computer science at university, my real start in post production was as an offline editor at L’espace Vision,” he said. “From there, I have increased the breadth of my skills. First I moved to online editing, and now I’m able to focus on colour grading, which has really captured my interest the most.”

Naotaka feels fortunate to have worked across a wide range of genres as an offline editor, and found the ability to imagine and create original stories through the composition of his edits to be a profound experience. “I definitely learned a lot from it,” he said.

“That led me to develop an interest in the whole process, from offline to finishing, so I challenged myself to get into online editing. Along the way, I got to know a variety of different finishing tools and systems, like Avid DS and Digital Vision’s Film Master to name just two.

“It was at this time that I discovered the ARRISCAN film scanner, and came into close contact with film for the first time. I became fascinated by the colours that make up the images, and came to spend more and more time on colour grading.”

L’espace Vision began as a two-person operation in 1987, and since then has continued to grow and invest in new post-production equipment and systems. Today, the company performs services from set to final deliverables for movies, television series and commercials. Naotaka described the Tokyo post industry as constantly changing.

“It’s important that we maintain a creative, adaptive outlook. The local industry services a very wide variety of productions from high-end feature films to many, many medium- and low-budget productions,” he said.

“That certainly keeps it vibrant, and we find the best way to stay competitive in such an environment is to focus on proposing optimised workflows and making them happen. We also have the Japan Post Production Association, which is a great forum for sharing information between post houses like ourselves, as well as vendors and resellers.”

Naotaka works on a Baselight grading system. “With Baselight you can create the exact creative expression that you imagine, and it is also good for staying adaptable and optimising,” he said. “Ever since I first saw it at NAB some years ago, I always thought it was something I wanted to try. Its colour management is reliable, and it has a multitude of tools to create a look, plenty of power and the flexibility to allow a variety of approaches to grading. I really enjoy learning the many features in Baselight, and being able to present those as options to my clients.”

The fact that Baselight is always evolving also appeals to L'éspace Vision, as well as FilmLight’s efforts to help them take better advantage of the system, especially through technical tutorial videos. For example, one of the studio’s recognised abilities is supplying a complete service from DIT and on-set systems through to finishing.

“By seeing the workflow through, start-to-finish, we're able to monitor the quality of the project at every step, which is of course very helpful,” he said. “I can use the BLG (Baselight Linked Grade) workflow quite effectively for sharing data between workflow stages. Using BLG files, we can create a colour pipeline from the initial on-set LUTs, through dailies for editing and processes including VFX, on to the finish.

“We now have our standard workflow in which we take the camera raw or log footage, work in a scene-referred colour pipeline, and share the media, BLGs and LUTs with the VFX team to finish the project. However, we do consider what will be most effective for each individual project, and adjust that basic workflow accordingly. So, using the BLG workflow whenever possible is an advantage.

Naotaka really likes using FilmLight’s original Base Grade on projects. Instead of a video signal or film stock, algorithms modelled on human perception serve as a foundation, so that Base Grade works the same way in every colour space.

It uses four parameters – flare, balance, contrast and saturation – to affect the whole image, and at the same time divides the image into brightness zones, defining the luminance in each one relative to a medium 18% grey. Since exposure values and pivot points are indicated in aperture stops, which are close to human perception, colourists can collaborate with the DP more easily.

“Also, Baselight’s tracker allows me to grade with fine detail, and I love the multi-paste tool, which selectively copies grades to other scenes. But it's the speed of the tools in Baselight that truly broadens a colourist’s possibilities in the grade. The interface makes it easy to manage the shots and their grades. I can organise each shot and scene quickly, and spend as much time as possible on the creative work.”

The bulk of Naotaka’s work consists of commercials and music videos that keep him constantly busy, but he is currently preparing and looking forward to working on a feature film. “I've been using the Texture Equaliser and Texture Blend tools a lot recently. I love how they give me such great control of the detail in the image, and they’re great for adjusting skin tones.” 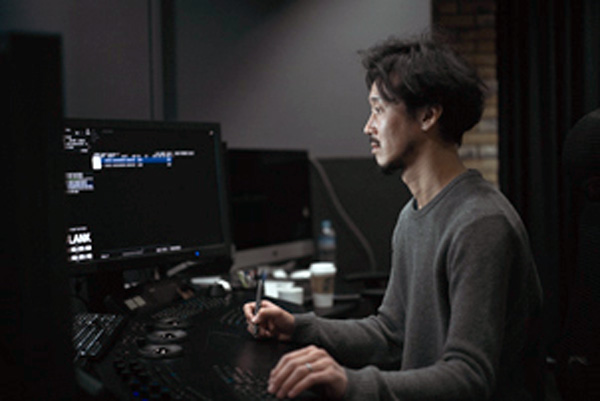 These texture tools are frequency separation techniques. Texture Equaliser divides the image texture into spatial frequency bands that can be adjusted individually, for precise control. You can soften or enhance textures and, at the same time, preserve the texture of fine details that are distinctive. Texture Blend is used to apply grading operations according to image detail, allowing fine control over the interaction of colour and texture.

Japan is recognised now for its interest and research into high resolution imaging, although Naotaka hasn’t had the chance to work on an 8K project yet. He noted, “The demand for greater resolutions is certainly there in specific sectors. I recently worked on a special event in which the media was to be projected from three 4K projectors, and also a project that dealt with 6K material on a three-screen set-up. I was able to grade the material smoothly with Baselight – the texture controls really came in handy in that case.”

A Fresh Eye for Colour

A challenge that he particularly enjoys is the chance to work across so many types of projects. “I really like every genre. Depending on the project, I have to adjust my way of thinking and how I would like to approach it in a technical sense. Each work has a theme and intention, and it's incredibly important, as well as quite exhilarating, to truly understand that intention and express it correctly.”

By constantly working on a variety of projects, he feels he can maintain a fresh eye for colour, and by meeting all kinds of people in the course of his work, he has been able to adopt perspectives that may have never have occurred to him on his own. “I find it exciting that I get to come into contact with different ideas all the time,” he said.

“As a colourist, it’s important not to be afraid of change and to have fun challenging yourself. Facing change will be the only way you can grow as a person. By enjoying yourself through these challenges, you'll give birth to new ideas, and new doors and chances will open up for you.”  www.filmlight.ltd.uk