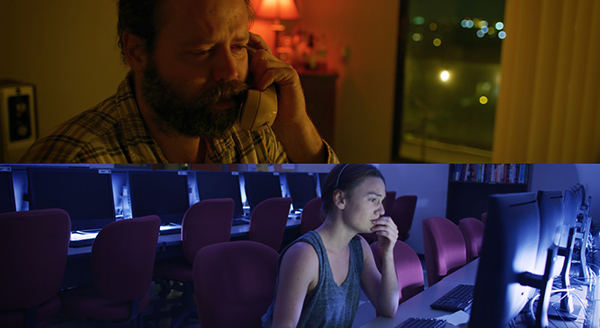 New movie ‘Last Call’ was shot in two simultaneous 80-minute takes by cinematographer Seth Wessel-Estes, who also worked as the film’s colourist. Director Gavin Booth has had a fair amount of experience with single-take projects, having directed a number of one-act plays and single shot music videos. He was director of the 2015 Blumhouse project ‘Fifteen’, also shot in a single take and one of the first movies to be broadcast live.

‘Last Call’ concerns a suicidal alcoholic on the anniversary of his son’s death. He attempts to call a crisis hotline, but misdials and finds himself connected with a single mother working as the night janitor at a local community college. From this point, the split screen production shows both characters in real time as they navigate a life-changing conversation.

Gavin’s early inspirations for ‘Last Call’ were the movies ‘Timecode’ (2000) and ‘Russian Ark’ (2001). Russian Ark was recorded in a single day, using a one-take single 96-minute Steadicam sequence shot entirely in the Winter Palace in Saint Petersburg. ‘Timecode’ was put together from four continuous 93-minute takes, filmed simultaneously by four cameras. The screen was then divided into quarters in order to show the four shots simultaneously.

Both Gavin and Seth anticipated significant challenges in colour grading a movie without edits, shot as two constantly moving shots at locations within a cityscape. Seth said, “Figuring out our approach to the grade was daunting in itself. We hadn't ever had to colour anything longer than a three or four minute shot in the past.”

In preparation before starting on ‘Last Call’, they shot a single-take music video together for the band Bleu, and used that project to design a workflow for production and a process for handling a constantly changing image. 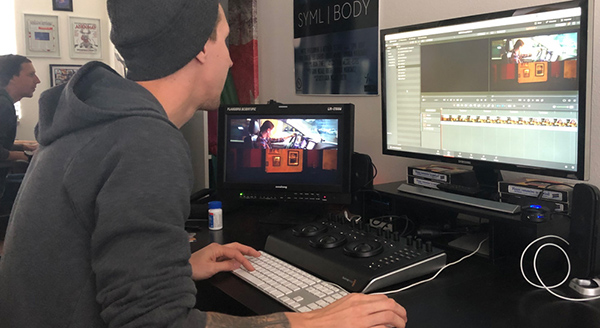 The two characters were filmed simultaneously, connected only by the cell phone call that was the link in the movie. Gavin would follow one character, Seth the other. Owing to the minimal on-set infrastructure, any challenge the team encountered would be reflected in the final image that Seth was responsible for in the grade.

“We needed to reduce the amount of crew for both camera and sound,” Gavin said. “We had to do without a camera assistant or a boom operator at the set, for instance, since we had nowhere to hide crew members or avoid boom shadows throughout the full take, on either side of the movie. Our sound mixers had to fit the actors with double lavalier microphones, and we relied solely on that.” They shot the project on a RED camera with an 8K 35.4 Megapixel CMOS HELIUM sensor, increasing the likelihood that all detail in the frame would be captured.

Seth and Gavin were also the camera operators, and would need to pull their own focus, while the gaffer would have to figure out how to use a mixture of practical lighting as well as hide every single cable and film light, since the single take on either side would move 360 degrees through the space. Moving from inside to outside, or even room to room, meant that the camera's exposure needed to naturally adjust at the same time. Every element would either help or hinder the final look, and the team knew they had limited time and budget to get it right.

For the look of the project, Gavin wanted to maintain a realistic style and avoid an exaggerated or otherwise over-coloured look that might have distracted from the character-driven drama. He said, “By using the long take to show reality, we wanted to keep it feeling as truthful as possible. For us, having too much of a look imposed on a piece like this can take away from the rawness. We wanted the audience to feel as though they were there with the two characters, hanging on every tense word they exchange.”

Once in post, Seth was aware that having a single long take with hundreds of node corrections would be unmanageable. Now working as colourist, he decided to import the project into DaVinci Resolve Studio and used the Edit panel to place cuts throughout the film to give him the story’s transition points. 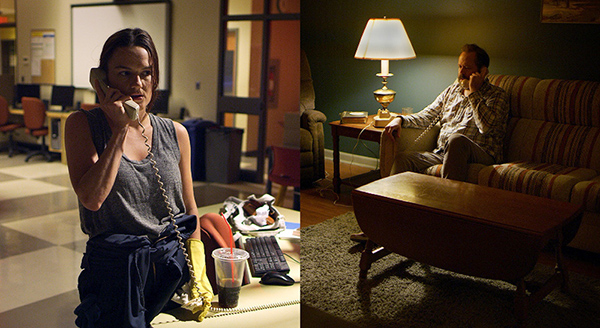 “I made cuts along the timeline that acted as scene markers. That way, I could individually colour each ‘scene’ or area by itself. In the Resolve editing panel, I determined exactly where I was going next and, working dynamically, created edits and used cross dissolves to smoothly transition between graded sections.”

Seth worked through the grade on the Davinci Resolve Micro Panel, for efficiency and also to have more finely tuned tactile control of individual parameters. “Since our look was so naturalistic, I ended up doing tons of very small, subtle corrections that would have been a hassle without working on a control surface,” he said.

Producing a split screen in post, showing each character’s part of the story, meant managing another series of challenges. As the camera moved from location to location, interiors and exteriors, they prepared to face contrasting lighting and exposures throughout the film, requiring careful grading to both weave the segments together while respecting each new look. “Since we were working with some uncontrolled lighting situations, we had to carry out exposure and colour adjustments dynamically as the camera and character move from one space to another.”

Matching the two sides of the film to ensure they felt cohesive throughout was also very important for the story. Each half of the screen inherently had its own look, but also needed to blend effectively so that the audience wasn't distracted by the visual contrast of the split screen. “Using the built-in comparison tools to bring up images side by side, as well as the various scopes, enabled us to ensure the look would remain cohesive throughout.”

Seth wanted to use a fair amount of vignetting that had to be keyframed in order to track with the moving camera. “The smart tracking built into Resolve was hugely helpful for a lot of this work. It’s very effective, but I love seeing how simple it is.” 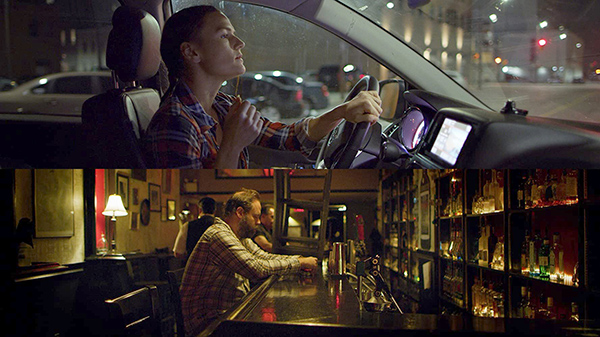 Other DaVinci Resolve Studio tools, such as the HSL (hue, saturation, luminance) keys, sharpening masks and complex keyframing controls saved steps when colouring the project as a single take film. With these tools available, he could refine the look of the finished movie to a level that, given their limitations, wouldn’t have been possible on set.

Gavin is proud of what they have accomplished, achieving a style he has long admired in other projects. He said, “As a filmmaker I have forever been obsessed with long take storytelling. Nevertheless, I am also thrilled that our film's story rises above the gimmick of a long take.” ‘Last Call’ has taken awards at 25 international film festivals and its release (US) in cinemas is planned for 18 September. www.blackmagicdesign.com