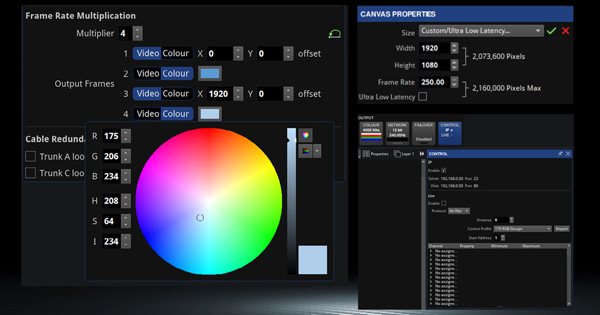 Brompton Tessera V3.1 software adds HFR and remapping functionality to the company’s Tessera SX40 and S8 LED processors, developed to support virtual production and cinematography, and for markets such as sports broadcast, simulation and virtual reality.

Tessera’s High Frame Rate (HFR) function displays video content on an LED screen at up to 144 fps. The most recent Tessera update makes it possible to extend this rate with HFR+, so that the Tessera SX40 and S8 can now support frame rates up to 250 fps. The result is smoother playout in eSports and simulator applications that use high-framerate content, for example, where the shorter duration of each video frame also reduces motion blur.

“The maximum framerate available will depend on the types of panel in use and may range from 60fps to a maximum of 250fps,” said Chris Deighton, Brompton’s CTO. “The maximum framerate for each panel type can be viewed in the processor's Fixture Library screen, or by using Tessera Remote in Offline Editor mode if no hardware is available. Combining the maximum 250fps with our existing Ultra Low Latency mode delivers a latency of just 4ms over the complete system.” 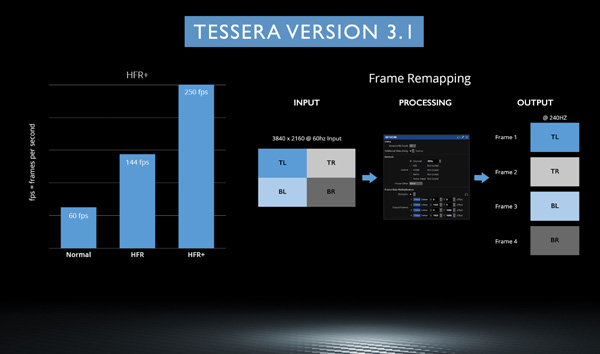 Frame Rate Multiplication is another pre-existing feature in Tessera software that is used to output each input frame multiple times to create a higher output framerate on the LED screen, and is a useful tool to ensure a camera will see a complete image every time its shutter opens, preventing artefacts.

This is augmented in Tessera V3.1 with a new Frame Remapping feature that allows the user to interleave different areas of the video raster or solid colours in the output. At its simplest, this means the output framerate can be doubled so that a black frame can be inserted between every frame of actual content – another technique for reducing motion blur. Any 24-bit RGB colour may be specified for each of these output frames, including black for dark frame insertion, white for supplemental lighting or solid colours, such as green for visual effects.

Describing some potential applications for Frame Remapping, he said, “For example, when filming an LED screen with multiple cameras, each camera could see its own unique render perspective. Or you might want to display alternative content on the screen that is only seen while while the camera shutter is closed."

Accompanying this kind of video performance enhancements is a new IP Control capability for tighter integration with third-party or custom control systems. All Brompton Tessera processors now support both HTTP and raw TCP, allowing status monitoring and remote control of the critical screen parameters such as brightness or input source.

“Techniques for virtual production are evolving fast. This latest Tessera software version is Brompton’s response to the current demands of many producers already working in this space,” said Chris. “We also aim to anticipate their future demands by developing features that we believe will have continuing value as the industry continues to adopt Virtual Production and Extended Reality for the immersive content production.”  www.bromptontech.com