The Mo-Sys XR server is designed specifically for real time final pixel shooting, which means directors can see and approve the combined real and virtual images during the filming process and avoid spending excessive time on compositing in post to achieve the precise 3D camera tracking needed for cinematic quality footage.

The 708 square metres of floor space at the ARRI studio is surrounded by 343 square metres of LED wall, including curves and a ceiling. The volume consists of a main curved wall measuring 30m x 5m, two moveable, tiltable side screens, each 3m x 4.2m, and a height-adjustable 9.6m x 9.6m ceiling. A back curve measuring 18m x 4.2m closes the adaptable space, which can be programmed to display 360-degree imagery. 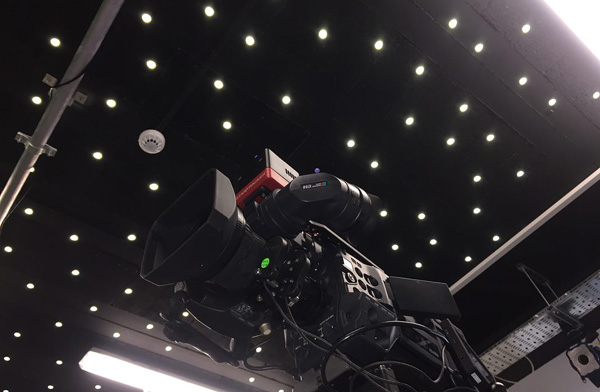 Mo-Sys Star Tracker’s LED sensor mounted on the studio camera keeps track of the locations of the reflective stars fixed to the ceiling, relative to the camera’s position as it moves through the studio.

The curve is constructed from ROE Visual Ruby 2.3 panels, while the side screens, ceiling and back curve use ROE Visual Carbon CB5 panels. The LED panels extend 360˚ around the studio, allowing the light from the projected virtual elements to fall naturally onto the real objects and actors and produce realistic, soft-edge lighting effects, to be captured in camera.

The facility will also being using the most recent feature, Cinematic XR Focus, that Mo-Sys has developed for VP Pro XR. Focus pullers can use it to pull focus between the real and virtual environments, using the same lens focussing controllers they are used to.

The LED volume was designed and installed by systems integrator and supplier Creative Technology in collaboration with ARRI. Located at ARRI’s UK premises in Uxbridge, with camera, grip, and lighting packages available on site from ARRI Rental, the studio is available for hire to short and long-form productions of any kind, events, education and R&D.