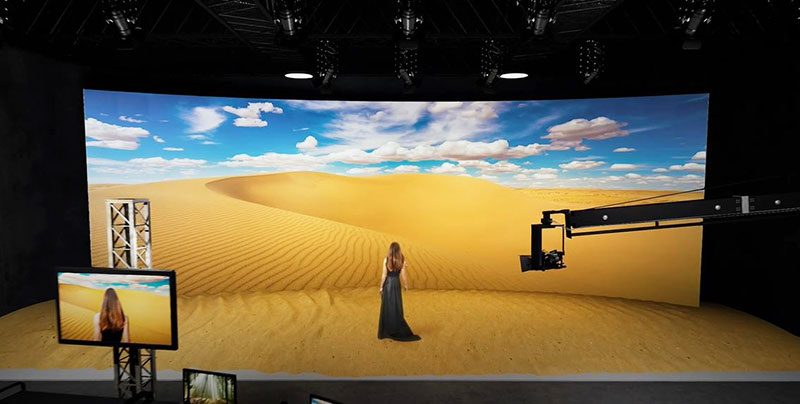 The Society for Information Display (SID) has awarded the Display Application of the Year award to Sony Corporation, Sony PCL Inc and Sony Innovation Studios Inc for their Crystal LED Virtual Production System.

A virtual background, such as 3D CG imagery, is displayed on the Crystal LED B-series display, capable of supporting high resolution, high brightness and wide colour gamut. The set-up can be used for video production that combines CG and live-action in real time without post-production work such as compositing. The combination of the Crystal LED display panels and VENICE was chosen for high-quality colour reproduction and gradation, in order to produce high-quality content and reduce the amount of editing work needed.

The point cloud software Atom View, which Sony Innovation Studios acquired from developer Nurulize in 2019, is also part of the system. It scans existing places and objects and converts them into 3D models, making it possible to re-create a photorealistic virtual background. By using these products together, artists can create a result in which it appears that the subjects are inside the virtual environment.

In Japan, Sony PCL began experimental demonstrations of Virtual Production systems in 2020, and is now actively making the system available to customers. Sony PCL has already achieved results in various content production businesses such as commercials, movies and music videos. Sony PCL will continue to supply production equipment and creative work, including virtual production at the Kiyosumi Shirakawa BASE, a dedicated virtual production studio established in Tokyo in February 2022 that makes use of Crystal LED displays.

“The SID Display Industry Awards recognise the highest quality display products or applications introduced to the market during the previous calendar year,” said Wei Chen, SID’s Display Industry Awards Committee Chairman. “We are proud to award Sony Corporation, Sony PCL Inc and Sony Innovation Studios Inc a 2022 Display Application of the Year honour for its Crystal LED virtual production system. We commend the company’s ongoing commitment to innovation and to helping shape the future of display performance and solutions.”   pro.sony