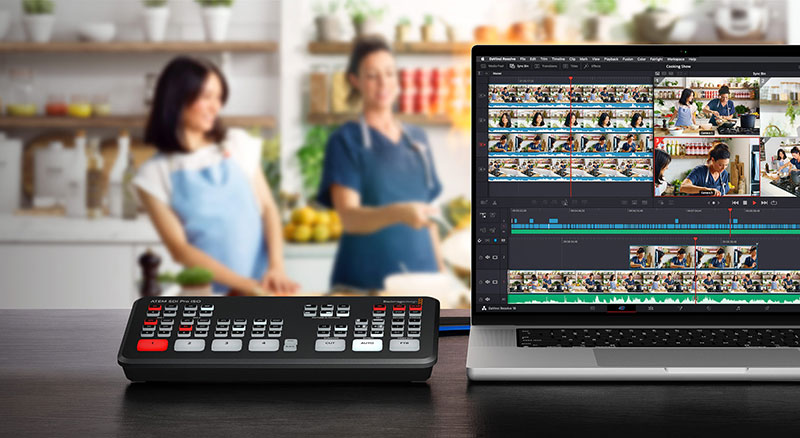 The ATEM SDI and ATEM SDI Pro ISO models each have four SDI inputs, and the ATEM SDI Extreme ISO has eight inputs. The switchers are compact and include internal DVEs, chroma keyers and professional transitions. Despite their small size, all inputs are built with standards converters and a Fairlight audio mixer with 6 band parametric EQ, compressor and limiter. These features support professional live production using multiple cameras, for live streaming to YouTube and Facebook, and other applications.

The switchers’ front control panel includes buttons for selecting sources, video effects, transitions and audio mixing that are large enough for a presenter to use by feel. The ATEM SDI Pro and Extreme models have buttons for recording and streaming control, as well as output selection buttons for switching between program, direct camera feeds and the switcher’s multiview.

On the rear panel are SDI connections for cameras, extra microphone inputs, USB for webcam plus multiple SDI ‘aux’ outputs for program video. All video sources will re-sync to the switcher, even if operating at different video standards.

With a dedicated standards converter on each 3G-SDI input, ATEM SDI devices will automatically convert 1080p, 1080i and 720p sources to the switcher video standard. Because they are true aux outputs, users can independently customise the source video routed to each one. All outputs include camera control and tally information. The SDI output on the Pro and Extreme models can also be selected to display the built-in multiview.

About the multiview – when producing larger live productions with multiple cameras, the ATEM SDI Pro and ATEM SDI Extreme models include a professional multiview showing all video inputs, preview and program on a single SDI monitor. Each camera view includes custom labels, audio meters and tally indicators showing when each source is on-air, plus status for recording, streaming and the audio mixer. The ATEM SDI Extreme model supports up to 16 custom views.

ATEM SDI Pro ISO and ATEM SDI Extreme ISO models have a built in hardware streaming engine for direct live streaming to YouTube, Facebook and Twitch via their ethernet connections. Palettes in the ATEM Software Control App (see below) for streaming setup also display streaming status in the multiview, which is simple to understand because the data rate indicator shows the internet speed required for the video format in use.

When users are producing live on location, an Apple or Android phone may be connected to the ATEM SDI Pro or Extreme USB port to use mobile data. These models also support direct recording of streaming data to USB flash disks.

The ATEM SDI Pro ISO and Extreme ISO models are able to simultaneously record multiple video streams, including clean feeds of all inputs and program, which allows users to edit live events. Media pool images – graphics and frames used for titles, opening plates, logos and so on – are saved with the video files, which include metadata tags such as synced timecode and camera numbers. These features make it possible to re-edit a live show with new color grades, effects and graphics. Because the audio sources are recorded, the audio can be professionally remixed as well.

The ISO models also save a DaVinci Resolve project file. In one click a live production can be opened as a video edit. All cuts, dissolves and media pool graphics will be loaded to give users the opportunity to fine tune edit points or completely replace shots. Using the DaVinci Resolve Sync Bin, users can edit shots via a multiview interface. All ISO files will be automatically aligned by timecode, displaying all camera angles precisely synced.

The ATEM Software allows access to every feature in the switcher via a user interface with parameter palettes for making quick adjustments. Although users can connect via USB, if using Ethernet it's possible for multiple users to connect to the ATEM SDI using separate copies of ATEM Software Control on different computers. The switcher state can also be saved as an XML file. For clip playback, HyperDeck disk recorders can also be controlled via Ethernet.

The ATEM SDI Extreme model includes four independent upstream chroma keyers that may be used for virtual sets, with scope for one keyer per camera. With ATEM SDI Extreme’s eight inputs, four can be used for cameras and the other 4 can be connected to a virtual set computer for the rendered backgrounds. For fixed camera virtual sets, pre rendered still image backgrounds may be loaded from the media players and media pool. Customers can setup macros to change cameras and load the correct background into the media players.