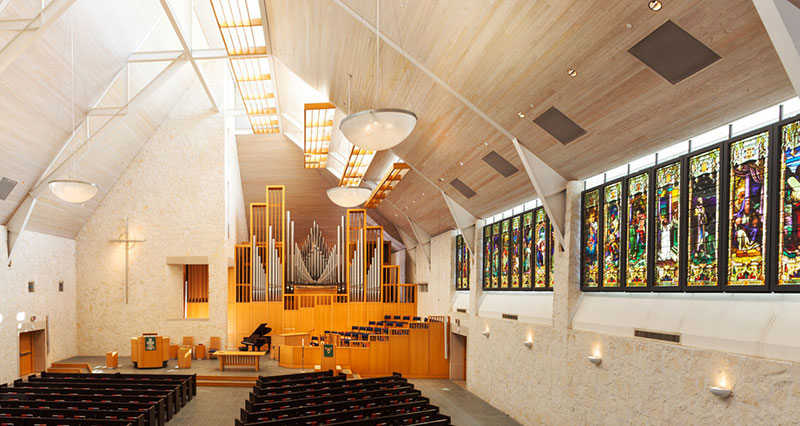 NorthPark Presbyterian Church is the first Presbyterian church and only the second house of worship built in Dallas, Texas. NorthPark has been at work in the community for more than 150 years and now has a membership of more than 350 in the Dallas area and elsewhere.

During the pandemic, similar to many churches, NorthPark faced the contrasting challenges of keeping the dispersed congregation connected, growing it beyond the Dallas area and protecting people’s health. In response, Communications Manager Martica Luckey and AV Manager Stuart McRae have set up a live streaming facility at the church, effectively expanding its digital presence to attendees across the United States, Canada, South America, Asia and Africa.

Having started their operation using an ATEM Television Studio Pro HD live production switcher, Martica and Stuart recently upgraded to an ATEM SDI Extreme ISO, which has simplified their equipment and means they can deliver a broadcast quality stream. They also use a HyperDeck Studio HD Mini broadcast deck for backup recording.

“We used to have SDI to HDMI converters on our cameras and video feeds but standardising on SDI makes our productions much more dependable and reliable, and eliminates several potential points of failure,” said Stuart, and also noted the reduction in hardware. “We don’t need to spend money on converters any longer, and the ATEM SDI’s streaming capability is built into the device. It gives us more functionality in a smaller footprint.”

Although streaming has become an important component to each service, the spoken word for the live congregation remains the top priority. Stuart has to mix live sound in the sanctuary as well as organise a separate mix for streaming. The ATEM SDI Extreme ISO’s built in Fairlight audio mixer is a good match for this kind of complex workflow. Stuart described the varied and sometimes opposing challenges they manage when producing the live events simultaneously with the recordings. 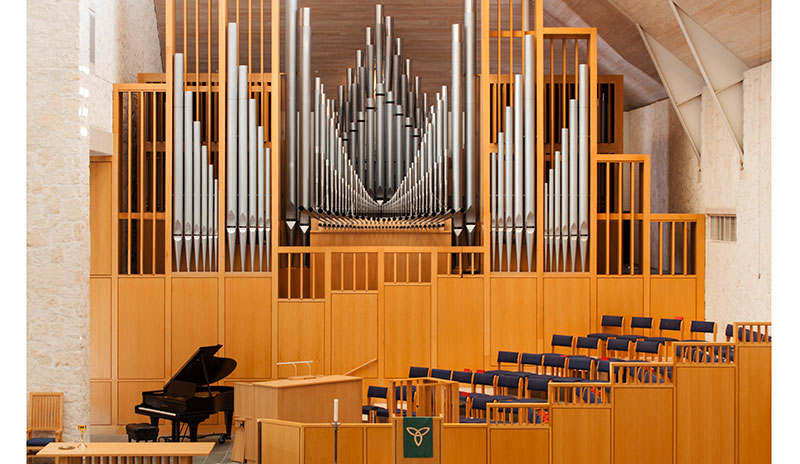 “We use seven to 10 microphones in our services, mixing on a separate console, and send a dedicated output with no EQ (equalisation) to the line level inputs on the ATEM,” he said. Line level inputs come from mixers, signal-processors – and most other audio gear apart from microphones. Microphone level (or strength) and line level need to be differentiated because microphones typically have weaker signals compared to line outputs from other audio devices. In fact, when ‘microphone’ mode is selected on the ATEM, the input is boosted slightly to compensate.

EQ, or equalisation, manipulates the frequency content of a recording by cutting unwanted frequencies and raising or lowering others, ultimately balancing out sounds so they work together.

“As you’ll notice in the pictures, our Sanctuary is huge. It has either rock or wood surfaces on the ceiling, floors and walls which gives the room a very live sound with lots of harmonic echo, especially in the low frequencies. For our choir and amazing Casavant Freres organ, we don’t need any amplification in our Sanctuary since the room has such a full sound, but we do need to capture everything for the stream, including all the music in stereo. In particular, wemake a point of capturing the congregation’s spoken responses and singing on hymns,” Stuart said.

Furthermore, since the Sanctuary naturally has a lot of bottom end sound, all of the spoken word element has to be equalised through the sound system to make the voice as clear as possible. At the same time, the spoken word and congregation’s voices for the stream do not need the same equalisation as the Sanctuary. Satisfying all of these demands at once needed a special approach. 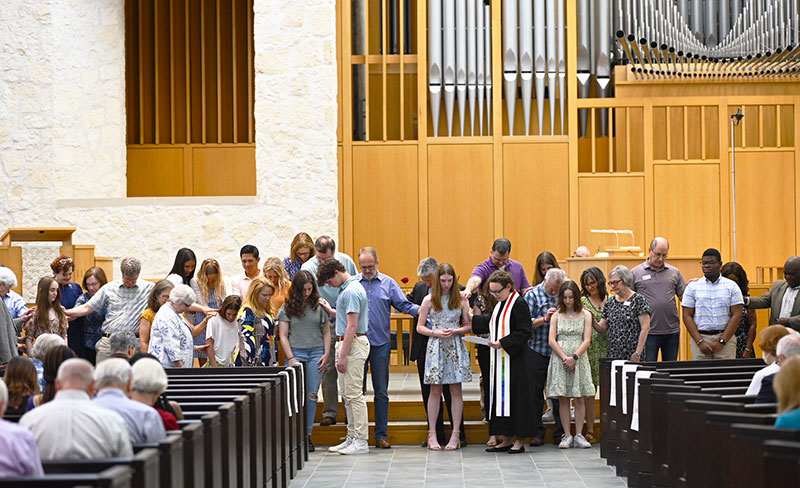 “Basically, we need two completely different audio processing systems,” said Stuart. “We always want to have sound on the stream and not the audio equivalent of a fade to black. With live sound, we only use compression to hold levels consistent, but this would give us too much level fluctuation for the stream. With the ATEM’s Fairlight audio mixer, we use the expansion and compression to control our apparent loudness to standard listening levels.”

Compression reduces the overall dynamic range of the audio by detecting when it exceeds a specified level, and then attenuating it by a specified amount. In effect, it narrows the difference between the loudest and softest parts of a track, making the level more consistent. Expansion does the reverse. Downward expanders reduce the level of an audio signal below the threshold, making quiet sounds quieter. Upward expanders raise it above the threshold, making loud sounds louder.

Stuart said, “Taking a flat feed, we can also adjust the equalisation with the Fairlight audio engine. While we are using some compression on spoken word to control the sound levels in the Sanctuary, we need the stream to sound different and as loud as possible to be compatible with current streaming audio standards. By taking audio from our mixer with the ATEM audio line input, before it’s been equalised (or ‘flat’ for short) for our Sanctuary, we can then equalise and process the stream audio with the Fairlight audio engine to get the exact sound we want.

“Our online audience may be using a phone, tablet, computer or watching our YouTube feed on a Smart TV with big speakers – regardless, we have to have high quality sound. The ATEM Fairlight mixer gives us the ability to expand the gain for low level audio and compress the levels that are too high, giving us a consistent, loud and clear sound.”

Martica likes using the ATEM SDI Extreme ISO’s ability to save a DaVinci Resolve project file. It means that, with a one click, she can open the live production as a video edit. “Being able to record all of our cameras, as well as our video presentation software output, with the ISO feature onto the HyperDeck Studio HD Mini or a simple hard drive makes back up quite easy,” she said. “When we record any services in advance, we use this so that if we have any switching mistakes, we can rectify them in DaVinci Resolve.” 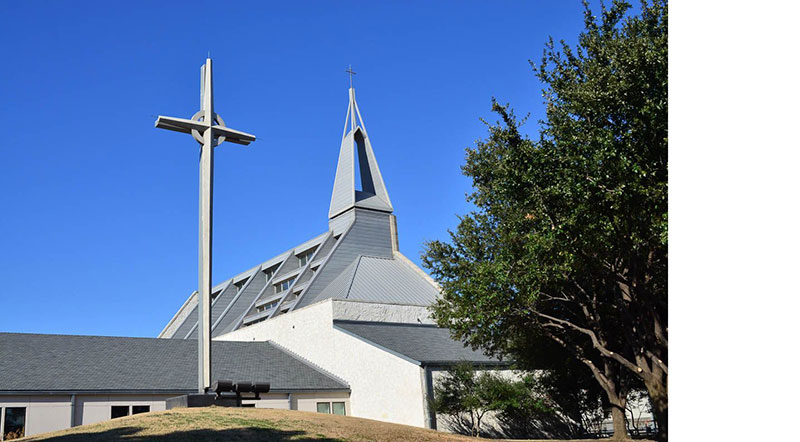 Looking toward the future, Martica and Stuart plan to expand the scope of the church’s sanctuary. “We need to send video to several TV screens around the building, including one just outside the sanctuary on a legacy video network. We’ll be sending the output from the ATEM SDI Extreme ISO to an ATEM Streaming Bridge to feed those screens, with minimum video delay,” Stuart said.

The Streaming Bridge will be used to receive a H.264 stream from the ATEM switcher, convert it back to SDI and HDMI video and then send it on to remote locations around their local network, preserving quality at very low data rates. They will also be able to use Streaming Bridge to reach their global destinations via the internet.

“We’re currently using the streaming workflow for funerals, award ceremonies and other initiatives within the local community as well. Blackmagic Design has helped us grow our technical workflow, better connect with the local community and achieve a global following.” www.blackmagicdesign.com