FSM Scales Up a World of Nutrition for Nestlé

FSM Scales Up a World of Nutrition for Nestlé 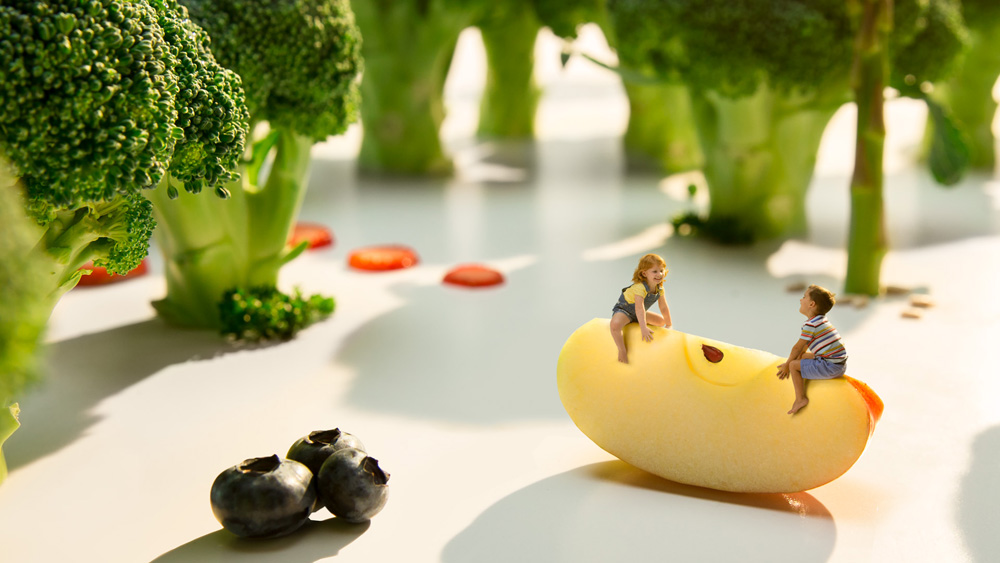 FSM recently produced and carried out post production on an online video for Nestlé who wanted to attract visitors to their health portal dedicated to the first 1,000 days of a child’s development. Instead of selling products, the video’s purpose is nutritional awareness, and needed to look credible and wholesome. The idea was to create a world devoted to nutrition where young families play and thrive, using real fruit and vegetables to build the environment.

The budget was extremely limited for this vision, and so a simple approach was chosen. However, simple didn’t mean easy and in this case, planning ahead was the FSM team’s key to success.

The shoot was done in two stages - a miniature shoot with some real vegetables on a white set for the food environment, and a green screen shoot to capture the live-action talent. Because integrating these two shoots was going to be a critical aspect of the project, both the video and print components were thoroughly pre-visualised in 3D. The vegetables were 3D scanned and used as placeholders, and a scale of 1:34 was chosen between the miniature and live action worlds.

Creative Director Emile Rademeyer said, “Spending time in previs really helped us work out the correct scale. It had to accommodate our creative approach, which called for a particular size of human - our people couldn’t be too small or too large in comparison with their vegetable world.” Setting up the scene as a project in Maya and rendering it out in Arnold also gave them a good feel for the look of the commercial.

All aspects of the project had to be scaled accurately, including the two sets, camera positions, lighting rigs and props. The miniature environment was shot first and used to establish the world according the chosen scale. Doing this in advance helped both to frame the green screen shots correctly, and to allow space in the composition for people to comfortably interact within the food environment.

Also aiding integration in post was the use of the same model camera for both shoots, the ALEXA Mini, capturing in ProRes 4444 with ARRI Macro Lenses for the miniature set and Leica Summicron-c lenses for the talent. A natural style lighting set-up for the miniature world was another key factor and determined the mood of the whole campaign, which included print components. The mood established with the lights in the miniature world was physically scaled up 1:34 and matched with full-sized lights for the talent shoot, allowing integration of light and shadow. 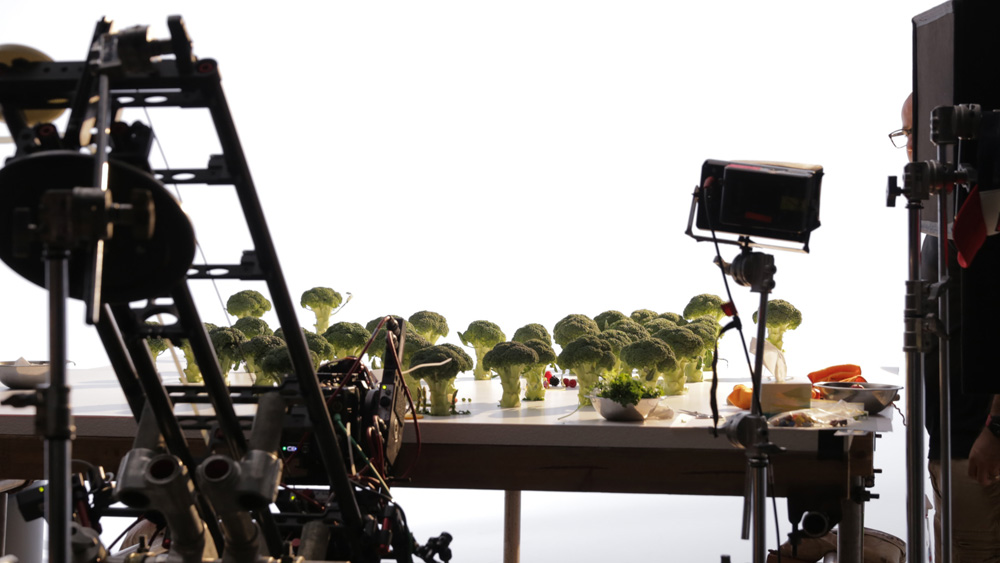 The camera moves designed in pre-visualisation were programmed into a miniature motion control rig although, due to budget constraints a motion control rig for the live action shoot wasn’t an option. Instead, a custom strip of LEDs was projected onto the side of the studio wall to calibrate for camera height as well as one on the floor to show distance and speed the camera needed to travel. The calibration allowed the grips to manually scale up the miniature move 34 times in size, matching the miniature camera moves almost perfectly to their miniature counterparts. Any discrepancies were dealt with in compositing.

In post, the green screen elements of the live-action talent were matched manually to the composition in the miniature shoot. Any props the talent interacted with, such as the blueberry, had been purpose built and captured with them in-camera. Post-production was also a chance to refine the integration between the two plates. All footage was shot at 4K for an HD finish, which gave the compositors plenty of flexibility to re-size and re-frame elements without losing image quality in the final HD composite.

Emile said, “On this job, we knew the two moving camera plates would not align perfectly, so the extra resolution gave us a safety margin. When working with chroma key footage, it also gives a better edge to the keyed elements, especially when the camera is recording in a compressed format like ProRes 4444. 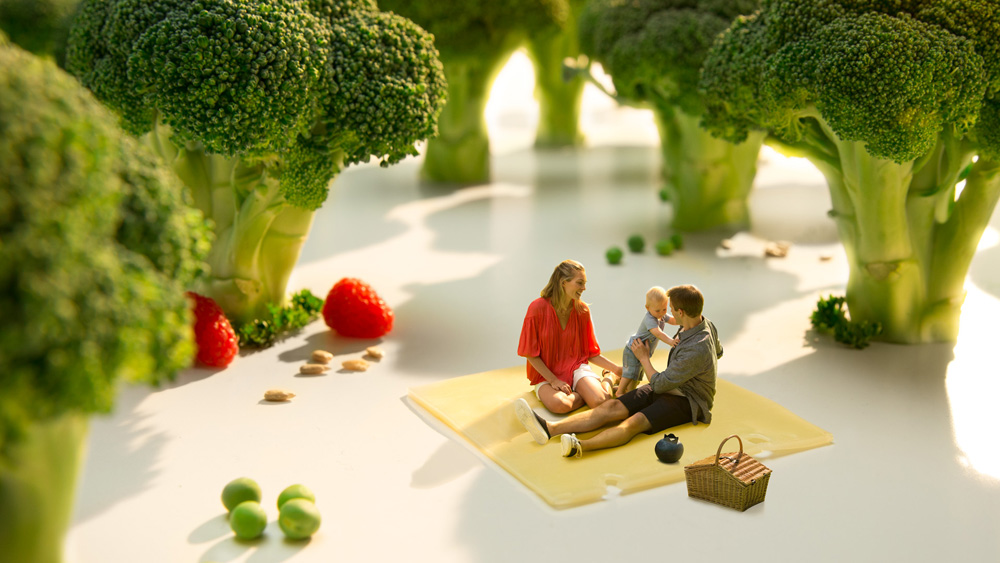 CG supervisor Dylan Neill and his team were prepared to add extra CG fruit and veg if they weren't able to get the desired looks on set. “But the shoot went so well that the only CG elements are the cherry tomato balloons,” he said. “We shot the kids running with real balloons, which we match moved in 3D and replaced with CG tomatoes.”

Lead compositor Stuart Cadzow, also VFX supervisor, said that capturing all vegetables in camera prevented problems with textures when adjusting the scales. “The heavy use of pre-visualisation meant that most of the scale issues had been dealt with well before the shoot. DOP Tony Luu shot the vegetables beautifully with really effective lighting that gave us depth, shadows and atmosphere already in the scenes.

“As the human characters generally only inhabit a small part of the scene we didn't have many issues with depth of field, either, which was mainly driven by the miniature shoot. The full scale material was shot in focus, and if necessary we kept the miniature scale and depth, and defocused the people. 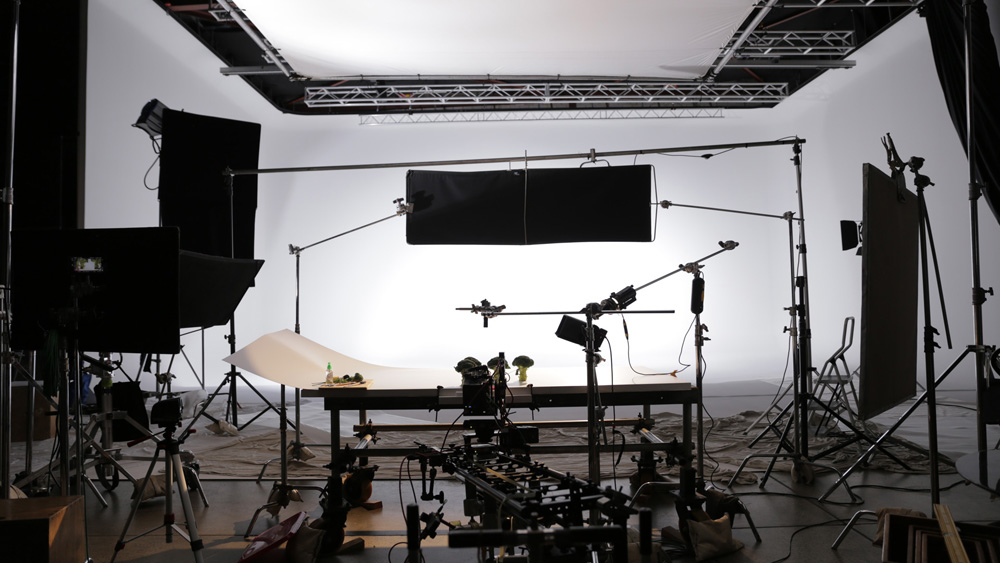 While they had taken great care to shoot the miniature and full size plates with matching camera angles, due to the manual operation, in reality a perfect match would have been impossible. There were also optical differences between the ARRI and Leica lenses used, so that while they both may have been the same size, the macro lens had different optical characteristics when focussing and pulling focus in such close proximity.

“In the composite we solved both camera moves as 3D virtual cameras in Flame and created a new third virtual camera that was a hybrid of the two moves,” Stuart said. “Then we recalculated and projected both plates into a common scene to line them up perfectly. Once a common camera move was in place, it was easy to reposition elements. Without a new virtual camera, repositioning any element would have invalidated the camera move even if it had been a perfect match.”   www.fsm.com.au