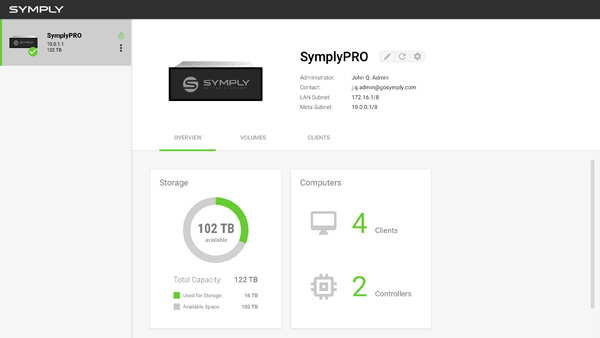 The new SymplyPRO system from Symply digital storage company is collaborative RAID storage with combined Fibre Channel and Ethernet sharing designed for broadcasters, film studios and post-production houses, especially those working with high-resolution content. It has been launched at BVE 2017 in London, 28 February to 2 March.

SymplyPRO is built into an integrated 4U hardware system, with the redundancy and performance of a conventional 10U rack system. It is designed as a workspace and aims to be faster and easier to set up, use and scale, and less expensive to buy and maintain than most existing systems, owing to its robust sharing engine and intelligence.

Built on an optimized Linux RAID core with embedded Quantum StorNext 5 and integrated metadata storage, each SymplyPRO unit comes with 24 drives and 192TB storage capacity, expandable up to 768TB. It also has a quad 16Gb Fibre Channel and dual 10GbE IP ports per controller supporting macOS, Windows and Linux clients. 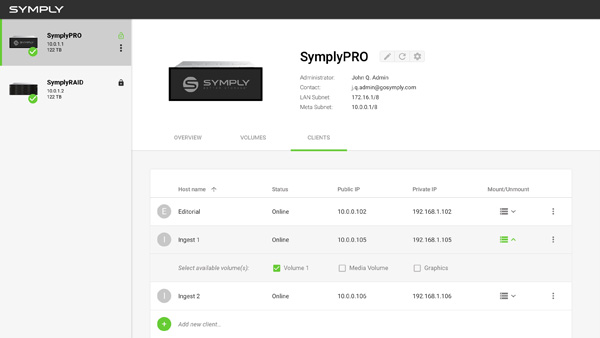 SymplyPRO users can simultaneously work on Fibre Channel or IP, based on performance requirements. Up to 20 users can connect directly to Fibre Channel using SymplyPRO, with sharing for further collaborators via Ethernet. SymplyPRO supports scalability of over 1PB of workspace, making it useful for growing workgroups. A cost-optimized 3U version is available using distributed metadata, and has all the other features of the 4U version.

SymplyPRO storage is sold with the SymplyGO software package, used to adapt, monitor and manage the workspace as users' needs change. The system is optimized for 4K, 8K, high frame rate and HDR workflows. The software is also used during set-up and maintainance, which includes 24/7/365 monitoring and keeps the system up to date. 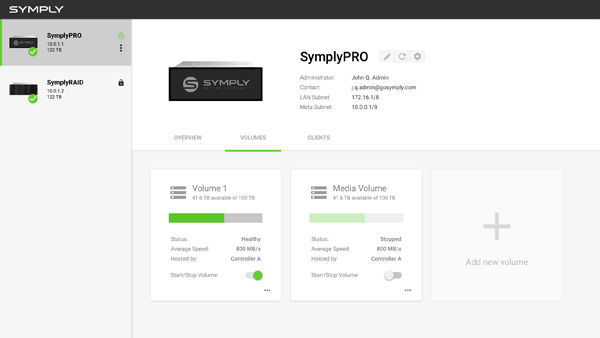