Open Road Entertainment is a broadcast and theatrical marketing company based in Burbank, California. The facility keeps 40 to 50 different projects in production at any time, which can add significant technical complexity to their operations. “Our base content, which includes video, audio, graphics and text, is delivered by different clients in different formats, which can be challenging to manage,” said Ryan Egan, post-production manager, Open Road Entertainment.

“We are also transitioning from Final Cut Pro to Avid Media Composer, and consequently have been transcoding a lot of material for imports to both systems and sometimes for exchange between the two NLEs. Meanwhile, we constantly aim to keep the storage balanced and in check. Smaller projects typically take up around 500GB of media, while larger projects can occupy over 15TB, depending on what comes in.”

The Open Road team is made up of writers, producers, editors, designers and music supervisors working and collaborating on theatrical advertising and broadcast promotions at about 40 workstations. The company recently undertook an infrastructure upgrade that has largely involved shifting their content and workstations from a volume-based system to EditShare file-level shared storage.

Because all of the team's work centres on content, Open Road Entertainment was looking for a media-aware storage platform that would better reflect the nature of the facility and its work, and help them manage growth in their business. “Our first move was to get to a file-level shared storage system. We had been working with volume-based storage for many, many years but due to the continued increase in number of projects and amount of content, the platform’s single-write, multi-read limitations were holding back our operations,” said Mark McKellop, assistant engineer.

“We needed a system with bandwidth, scalability and reliability. Because we run on more than one NLE, however, we were reluctant to commit to a proprietary system like Avid storage. We needed an option that was a little more flexible.” Due to their growing workload, the Open Road team has needed to add an extra 96TB XStream EFS node. The system's almost unlimited scalability, connecting to the main system was a simple procedure.

Their previous storage system could also not be re-partitioned, which left the team short of space. Projects would quickly outgrow their original space allocation and absorb two, three and four volumes. “In addition to pure space issues, our previous system had some quirks that really slowed down collaboration among the team,” Ryan said.

“For instance, one editor would write to a drive, but the rest of the editors and creative staff wouldn’t see the update until they unmounted then remounted the drive. So every time there was an update, we had to quit out of the NLE or compositing application and log back in to remount. This isn’t always possible, especially when you are in the middle of a project. Though we had workarounds, they led to some fragmentation, as content would be temporarily stored on external drives or separate servers. In short, we had reached the end of the line with that set up.”

Because there were no sharing capabilities, the team had to create volumes on the server for each editor to set up their capture scratch to minimise how much they re-rendered content or re-signed. The inability to share projects also meant someone would have to track down original sequences among the 20 editors.

The first move to upgrade Open Road Entertainment's infrastructure was to research file-level storage platforms designed for media workflows. They chose the EditShare XStream EFS scale-out distributed shared storage platform. Serving as the central hub for Open Road’s online department, the 480TB XStream EFS system – which includes Flow media asset management and Airflow web-based media management – has the required performance and space, plus media management tools that they can use to customise and update the workflow process. 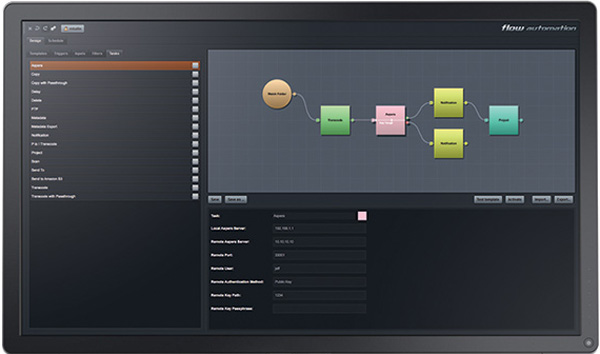 “Because we work under a lot of strict deadlines, we cannot have any bottlenecks affecting content access and sharing, and the new EditShare system has delivered on that,” said Roger Bacon, assistant engineer at Open Road. “The system is also much easier to administer. Being able to assign drives within the whole system has been very convenient – I simply assign a drive and it appears. In our old system, if I granted you access to a new project, you would have to log out and log back in to see it, which wasted time. I also like the ability to assign to groups.”

For the staff, EditShare project-sharing capabilities, which XStream EFS ships with, is one of the biggest single changes. “Having everything in one place already makes a big difference. An editor can pass another editor a sequence, or an assistant editor can come in and pick up a sequence or update if necessary, and the material is all right there,” Ryan said.

Simplicity also matters, because the workflow at Open Road Entertainment is interconnected. Projects cycle through Avid, Final Cut and Adobe Premiere NLEs as well as After Effects and Pro Tools systems. Ryan said, “We have Premiere deliverables. We deliver others out of Final Cut or Avid. Often we’re working on a project that goes through all three NLEs. Most of our audio work is done within the NLEs but we do have three Avid Pro Tools systems that we use for finishing.”

Designed for sharing across various platforms and applications, EditShare systems give users direct access to files with tools to work in the necessary format, immediately. Typical of scale-out system performance, speed is not affected as storage capacity grows, which makes a difference because 40 systems normally log in simultaneously through the day and evening. This was a performance capability that Open Road lacked in their legacy infrastructure.

Beyond performance and media sharing, the Open Road Entertainment now has a media management layer integrated into the XStream EFS platform. Using Flow media asset management and AirFlow web-based modules they can organise assets in a way that suits them in terms of sharing them across the facility and, eventually, with clients. Capabilities include asset tracking, production tools for managing ingest and storyboarding, and remote access.

Roger likes the collaborative qualities of the server instead of straight up storage. He said, “For example, having the Flow proxies available to preview saves us a lot of time, because they’re created automatically. Producers can log in and review material we are working on, and then give direction without having to track us down to check on availability. They can just retrieve it themselves.”

The Open Road team also wants to avoid having to do any transcoding, and plan to use Flow's automation tools to build client-specific workflow automation protocols that manage tedious processes like transcoding. Roger commented, “Automating the transcode step means that we can immediately take data as it is being delivered and start work, which is a big timesaver.”

The team also has further plans for AirFlow. Aside from remote access, the team plans to use it for client review and approval, consolidating the production and delivery tools to one application. “Currently, because the client review and delivery tools are in a separate application that is disconnected from production, we have to package the media separately for delivery to the client. Eventually, we would like to use AirFlow to securely share content with clients, especially for the review deliveries. It will keep everything in one place and give us a way to check and balance what went where without having to change systems. The result is less overhead and more control,” said Mark.  www.editshare.com