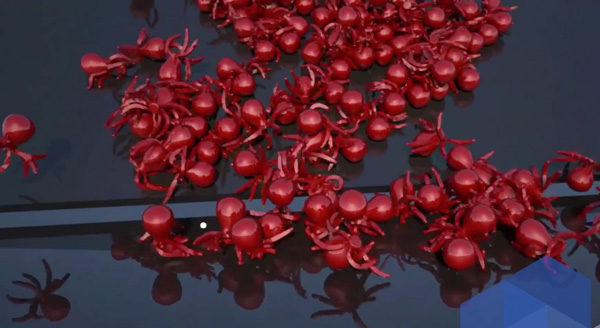 RealFlow 10 fluid simulation and body dynamics software has three new daemons, workflow updates and a new DYVERSO multiphysics solver for simulations of rigid, elastic and granular substances, and the interactions between them.

RealFlow version 10 has a new DYVERSO multiphysics solver that handles simulations involving rigid, elastic and granular substances like sand, as well as liquids. Different types of materials are simulated within the same framework and are able to interact with each other. You can simulate liquid with granular interactions or rigid bodies with liquids, and create effects like granular snow. 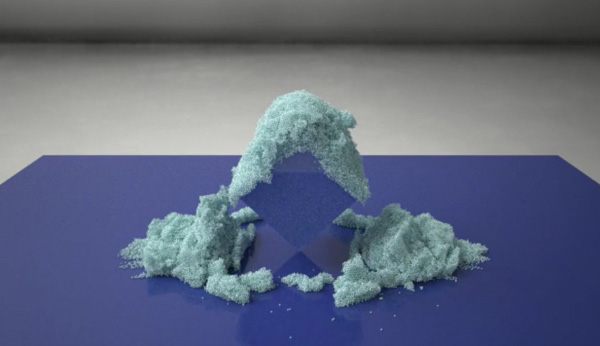 The DYVERSO architecture has been optimized and redesigned to take advantage of modern GPUs and multi-core CPUs. The DYVERSO PBD solver, for instance, now runs on the GPU as much as twice the speed as previously.

The HYBRIDO solver has also been updated in terms of speed and memory. HYBRIDO is used to generate large-scale simulations using a particle grid with a specified number of particles for each grid cell. Its simulation times have now been cut by up to one-half, and its demands on memory have also been cut substantially.

Many smaller issues have been fixed aiming to improve the stability of the software. Improvements have been made to the bitmap emitter, and there is now a time scale for HYBRIDO emitters. Collision detection is now continuous. New workflow tools and functionality have been added, plus some new daemons, RealFlow’s point-based nodes used to influence particles in specific ways. 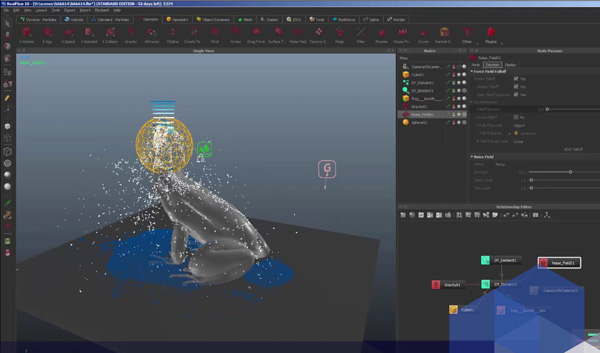 RealFlow 10 has three new daemons. The new Particle Skinner Daemon allows particle systems to deform the geometry of a modified object. The modifier transfers the motion and animation of your particle system, to an object built on standard geometry. As a result, the particles function as the bones for skinning the modified geometry. Similar to working with conventional bones, any movement among the particles can affect the results of the skin.

The K Volume Object Mode Daemon allows you to use any object as a k volume to remove unwanted particles from a fluid scene, that exist inside that volume. Similarly, the Falloff Object Mode Daemon makes it possible to use a chosen object of any shape as the falloff object that diminishes a daemon’s forces and controls exactly how they should vanish. For daemons generally, bounded options have been homogenised. 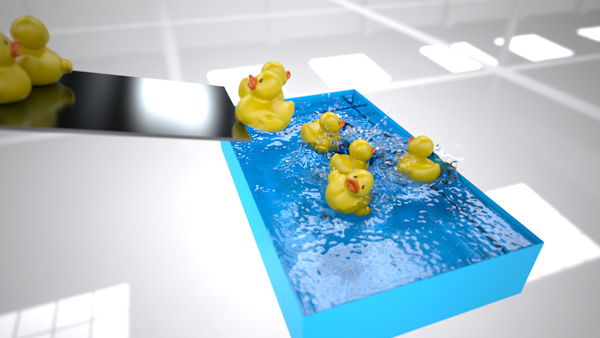 Updates to the workflow include a Project Manager, an Export Panel and a sharing tool called Pack & Go. RealFlow 10’s new project manager, scene node tree and scene tagging system helps organise large numbers of projects and versions - you can copy entire projects, and add screenshots and descriptions. The Pack & Go function packs all files into a ZIP file, including textures, Maxwell materials, HDRs for image-based lighting and objects. The final contents can be controlled with tick-boxes.

Instead of having to open, update and close RealFlow’s Export Central, all simulation nodes now have a new Export tab or panel on which you define export resources, paths, channels and so on directly for single nodes or node selections.

You can see many of these updates in action in the technical video here. RealFlow 10 is available now – coming up in the first patch are updates for viscous and viscoelastic simulations.  www.realflow.com