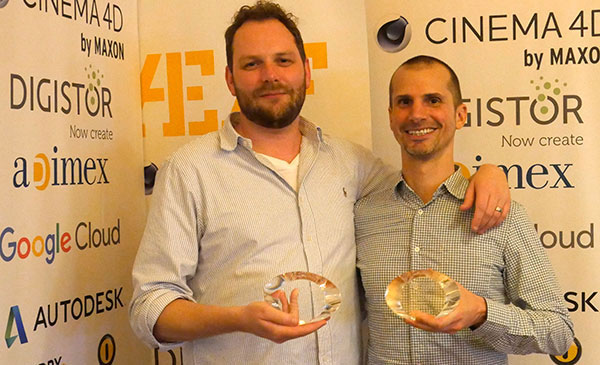 Anders Langlands, (left) one of the speakers at AEAF, and Keith Miller from Weta Digital attended the Awards Night to receive a Gold Award for 'War for Planet of the Apes' and Silver for 'The Jungle Book', both in the Feature Film VFX category.

AEAF 2017 was held on 16 August with a full day of top speakers and an Awards event that brought together artists from around the world at the Chauvel Cinema in Sydney. All speakers shared truly fascinating details and valuable tips from their work, and gave insights into their approaches to projects that ranged from commercials to television shows to movies. Their generosity was also inspiring, and the large audience was very appreciative. The speakers this year came from Animal Logic, MPC, Weta Digital, ILM, Iloura, The Sequence Group, Buck and Rotor Studios. See details of the speakers here and watch this space for more details of their presentations - coming soon.

In the evening, AEAF's annual Awards Night took place at the same venue, starting off with a social event, drinks and networking at the Chauvel bar ahead of a screening of the Award winning projects and finalists' work. See all of the winners in each category listed at the end of this article.

Feature Films VFX received the greatest number of entries ever in AEAF's history. The Gold Award went to Weta Digital for 'War for Planet of the Apes', the first award the film has won since its release in July. AEAF is also the first film awards event it has entered.

The Feature Film Silver Award was shared between MPC and Weta Digital for their work on 'The Jungle Book', recognising the creature, environmental and effects work the two teams accomplished for an entirely blue screen production. MPC's photoreal jungle defined the film's world for audiences, and their animals were lead characters in the story, requiring their VFX supervisors to contribute, from the very start, to script and storyboard development and guide the filming on set. Weta Digital accomplished complex work on the monkey population and the creatures' close interaction with the story's hero Mowgli. 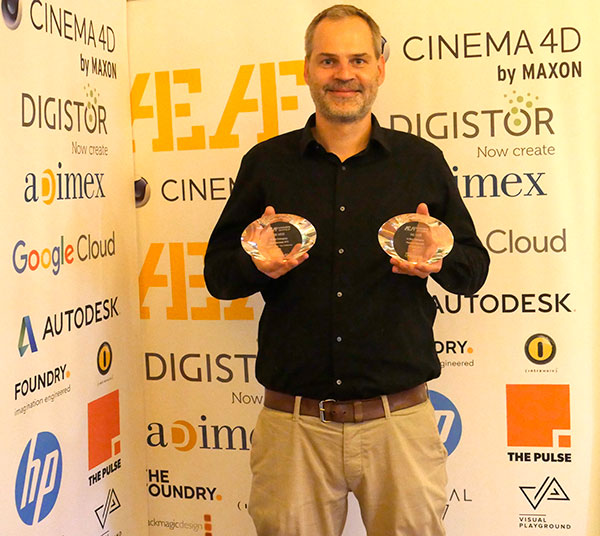 Bronze Feature Film winner at AEAF was ILM for 'Kong: Skull Island'. Their work not only added to the scale, complexity and character of Kong compared to earlier iterations in previous 'King Kong' movies but also created the island's fantastic creatures, Kong's massive battles and the helicopter sequences, and enhanced the Skull Island set in Vietnam.

Apart from these winners the AEAF organisers feel extremely honoured to have received 18 other Feature Film VFX entries. This includes the work Weta Digital completed for 'Valerian and The City of a Thousand Planets', also released so recently that it has also not been entered into any other film festivals. Other entries include 'Ghost in the Shell' from MPC, 'Fantastic Beasts and Where to Find Them' from Framestore, 'Logan' from Rising Sun Pictures and 'Deepwater Horizon' from Iloura. 'Doctor Strange' sequences were submitted by Luma Pictures, Framestore and ILM. Several of the projects mentioned here received Special Merit Awards.

VFX Supervisor Anders Langlands gave a talk at AEAF on the development of the animation - body motion capture, facial performance capture and keyframing - plus the fur system, environments, water, ecosystem growth and other tools at Weta Digital through the series of the three films in the Planet of the Apes series. More information on this talk, and all others, will follow shortly in another article at Digital Media World. 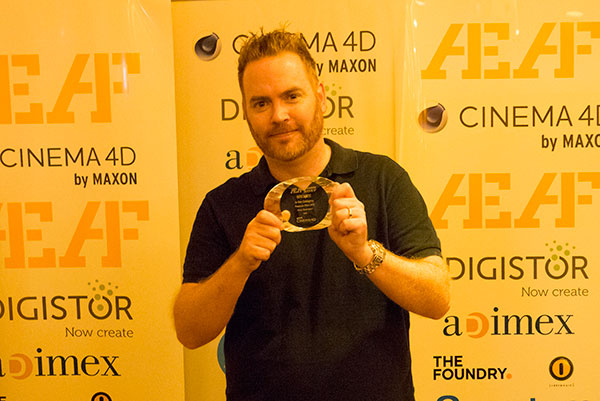 TV Series entries were outstanding. Rodeo FX scooped Gold for their work on environments and water, fire and explosion FX in Season 6 of 'Game of Thrones'. Aerial shots requiring compositing of Rhythm & Hues' dragons over Rodeo's environments and exploding ships looked terrific on the cinema screen at the Awards event. BlueBolt won Silver for their massive CG set extensions of period London in 'Taboo', filling docks and harbours with cargo ships and replacing views along the Thames with matte paintings and historical CG buildings and towers. The Bronze Award went to Screen Scene for the detailed, accurate enhancements and extensions to sets in 'Ripper Street'. After five seasons, Screen Scene's work is now an essential element of this series.

Such close competition between a large number of teams in this category resulted in several Special Merit Awards as well including Gentleman Scholar's 'Mia & Morton' for Dairy Farmers of Canada and the valiant flying 'Ostrich', a heroic photoreal story created at MPC for Samsung. The Domestos Grime Minister from Outpost VFX, Sainsbury's 'The Greatest Gift' by Passion Pictures and 'Cashback Credit Card' for Standard Chartered by Cirkus all received Special Merit as well, plus a serene animation from Psyop, 'La Mer: Part II' for Este Lauder. 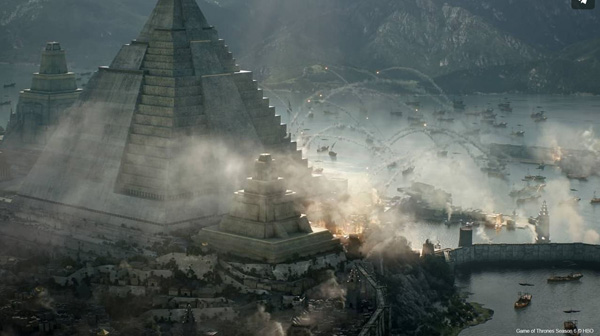 Commercials VFX brought another long lineup of stellar entries. It is good to see that longer form spots are coming into their own with interesting scripts, high production values and expert VFX. The 'Straw City' PSA, Gold winner, created for the FDA from the Alt.vfx team is a brilliant blend of live action actors in wolf and pig costumes, composited with animal heads showing facial animation that delivers the spot's warning against smoking, all in a city of pigs complete with straw-covered skyscrapers. MPC's Heineken commercial won Silver, features a whirlwind of faultless transitions from a snowy mountain peak, to outer space, to a trendy night club - and lots of other places. The Jose Cuervo spot 'Tomorrow is Overrated' from Electric Theatre Collective, earning Bronze, tells a story of pathos, drama, love and humour under a storm to end all storms.

Special Merit also went to Framestore for perfect compositing of new footage of actor George Clooney into classic movies shot on film, ranging from 'Psycho', inside a car on a dark night, to 'Easy Rider' on a Harley in full sunshine. The Embassy's 'Return of the Snowman' was recognised for its handling of a great story and an army of photoreal snowmen. Fin Design + Effects showed a Hyundai i30 plummeting to earth from the edge of space, driving out unscathed from a mighty cloud of dust combining practical and CG explosions and dirt through an expert VFX pipeline.

The VR Experience and 360 Virtual Reality categories have been fun and exciting to feature at AEAF. Since last year, the first time it was included, both have expanded tremendously. Experience The Pulse won Gold for the INFINITI IQ motorshow experience they created for Nissan, really using the opportunity to try new techniques in VR. Framestore's neat Google Daydream project exploring the world of 'Fantastic Beasts and Where to Find Them' won Silver, and Traffik took home Bronze for a VR team game played at Clipsal 500 motor races called Shell V-Power Virtual Pitstop.

Live Event brought another collection of beautiful projects, as it did last year with many entries from the Vivid Festival in Sydney. Winning Gold was 'Organic Vibrations' from the Danny Rose Collective, which morphed Sydney's MCA building into new shapes with mesmerising projected 3D motion graphics. Ample Projects picked up Silver for their illuminated jungle animation 'Light For The Wild' projected onto the entrance of Taronga Zoo, and Spinifex Group's 'Audio Creatures' literally brought the Opera House to life with brilliantly coloured organic and mechanical creatures. 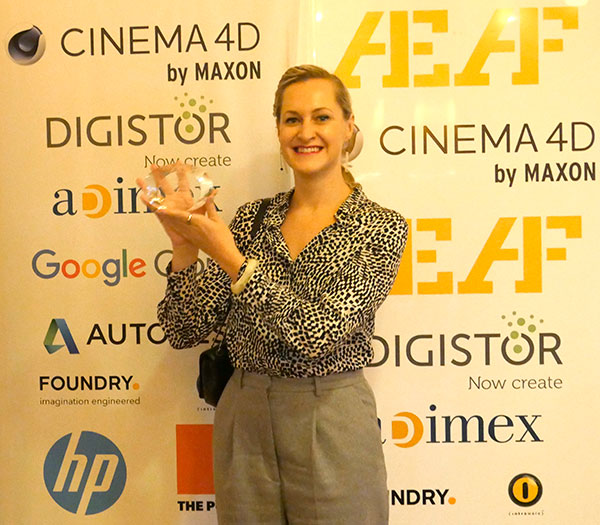 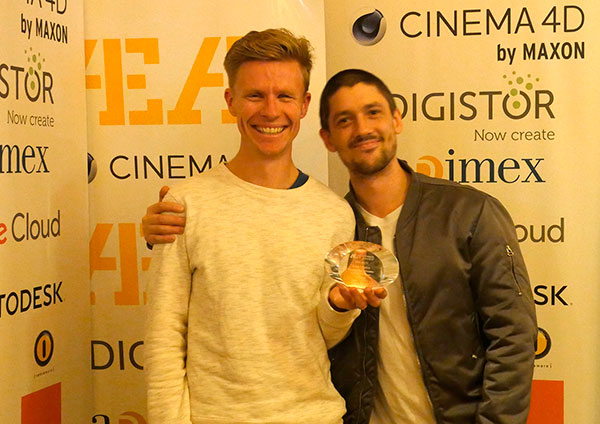 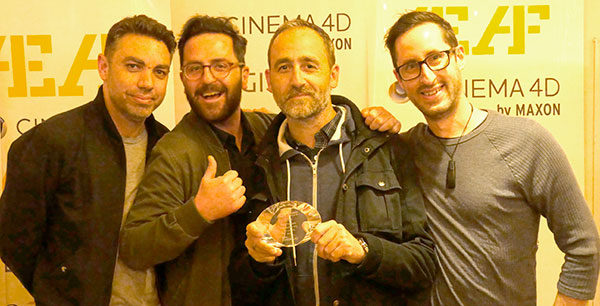 'Straw City' created by Alt.vfx was Gold winner in the Commercials VFX category. 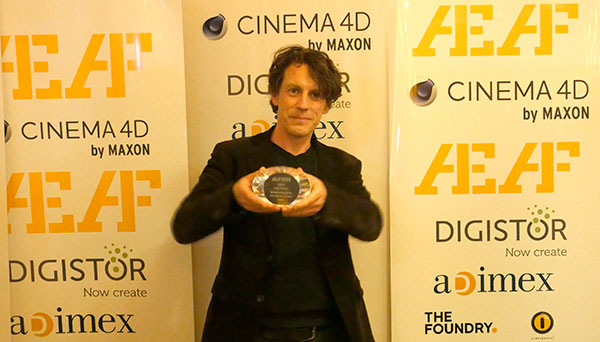 Sam Doust of Latchkey won the Gold Award in Education and Infographics for the elegant, atmospheric project 'The Lounge' featuring the Sydney Opera House.

Vandal won the Silver Award in Education and Infographics for 'Tetris', created for TEDx Sydney. 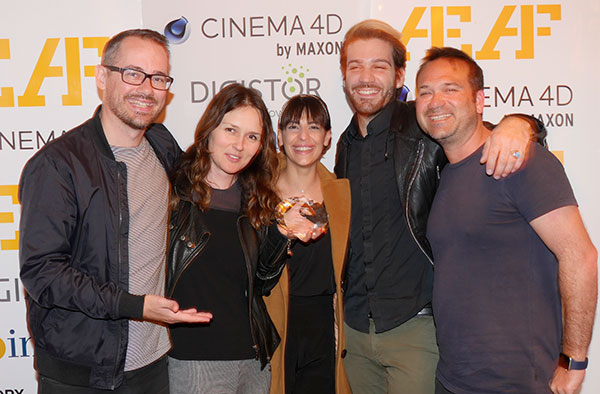 The team from Cutting Edge took home a Silver Award for their Event Opener made for Macquarire Telecom. 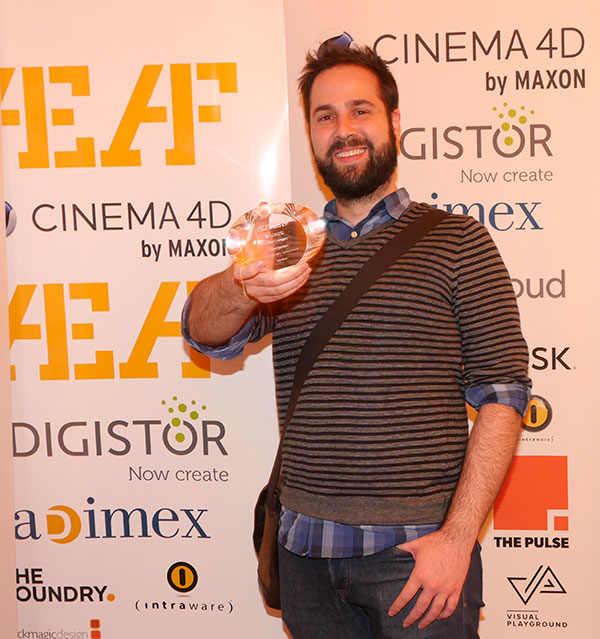 Scott Geerson at Substance poses with his Bronze Event Opener Award for 'Únconventional'. 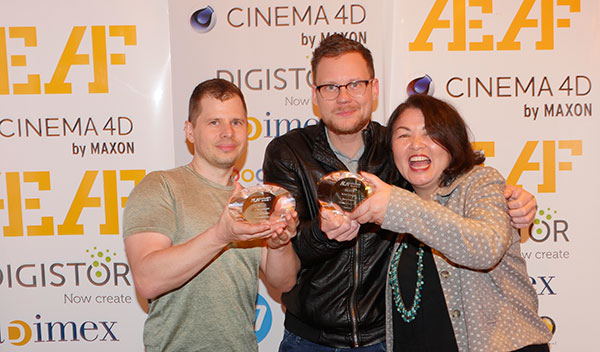 Idents and Stings Broadcast
MTV - On The Go - Engine   GOLD 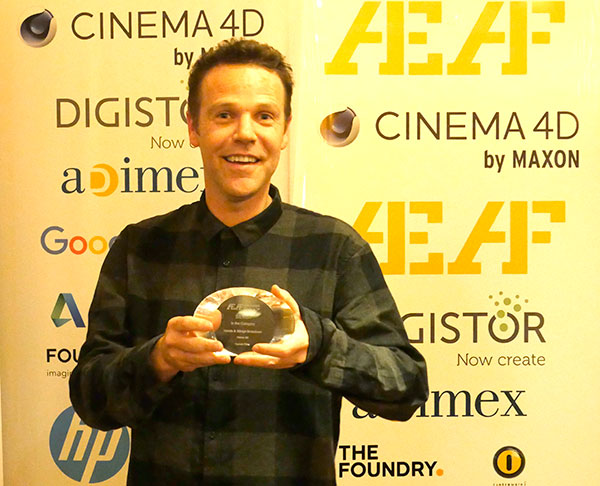 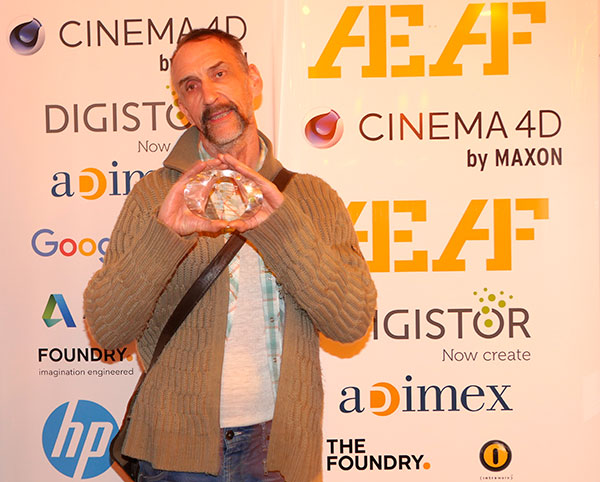 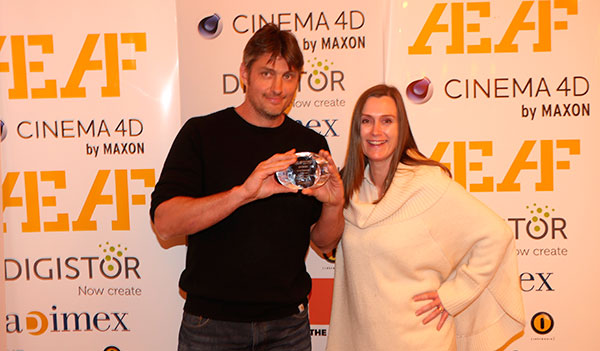 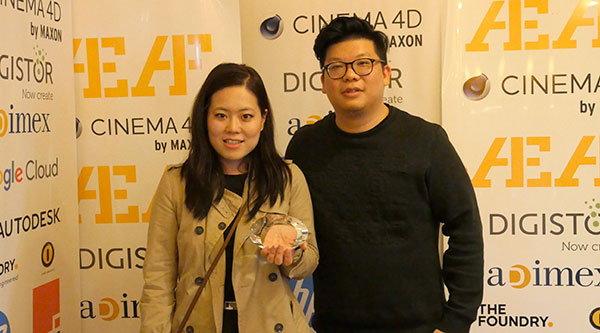 Mirari&Co. won the Bronze Award in Short Film for in-house project 'The Heart of Sky'. 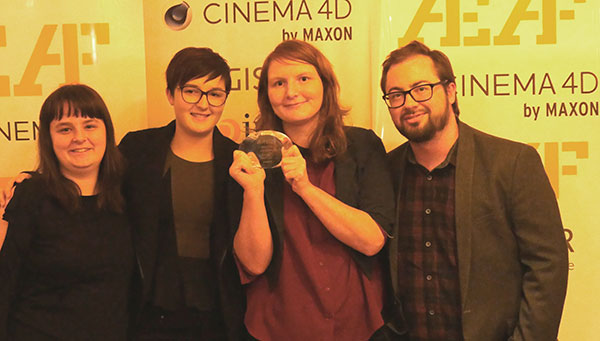 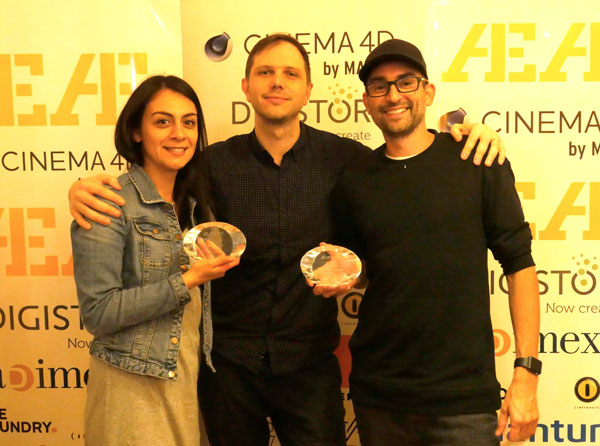 The Sequence Group won a Silver Titles Feature Film Award for 'Max Steel' and another Silver in Titles TV for 'Cardinal' Season 1. Luke Bicevskis (centre) and Ian Kirby (right) were speakers at AEAF. 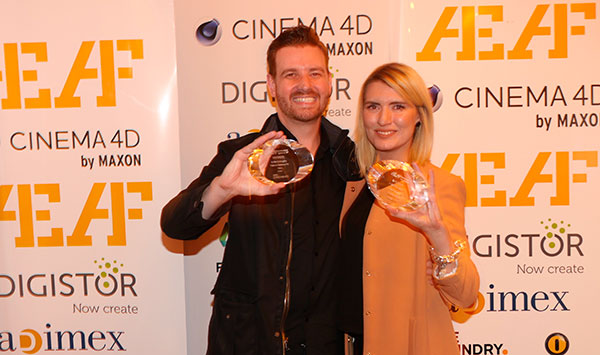 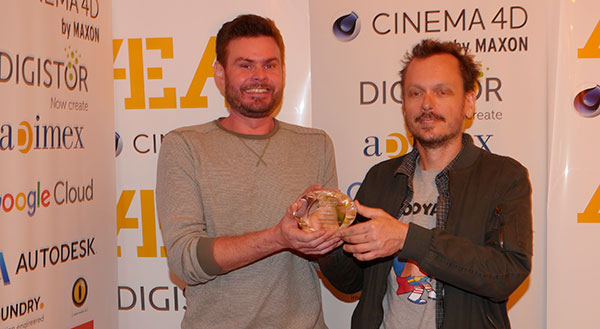 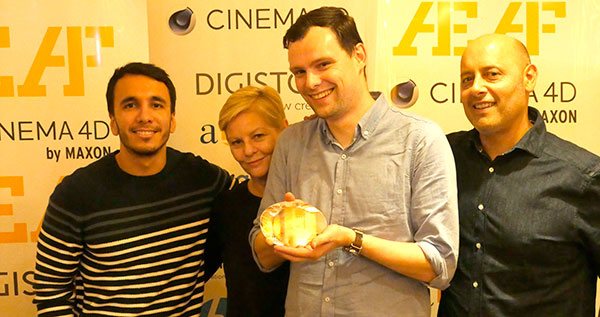 David Hoare, Daragh Casey, Fabio Nardo and Michael Gonzalez from Experience the Pulse pose with their Gold Award, won for the INFINITI IQ Experience project in the VR Experience category. 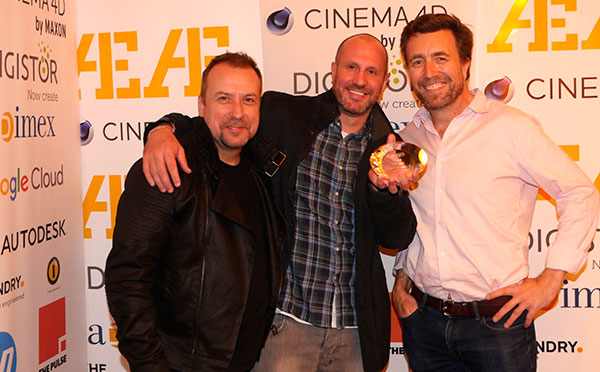 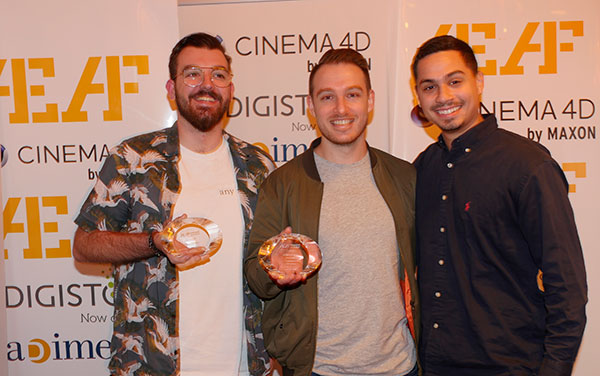 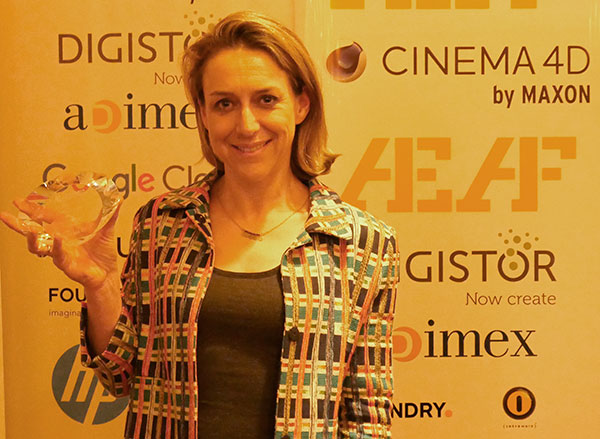 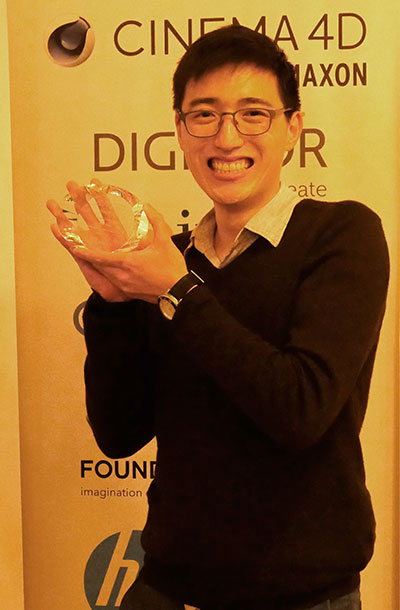 Paper Moose took home a Bronze Award for their Web Viral motion graphic for the Festival of Dangerous Ideas.