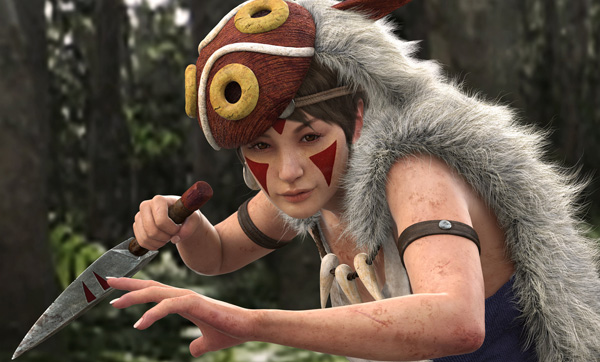 The application, developed for speed and ease of use, has also now been redesigned and repackaged to serve two different markets. Unfold3D VS, for Virtual Spaces, caters to game, VFX and VR artists and developers. Unfold3D RS, for Real Space, supports product design and laser texturing.

“By creating two versions, we can now cater to most pipelines,” said Rémi Arquier of Rizom-Lab. “Whether you’re a subdivision, 2.5D or CAD artist, Unfold3D's tools are specifically designed to work as a fast process, regardless of the project geometry, and to make simple models and complex scenes easier to unwrap.” Rémi created Unfold3D in 2003 for 3D artists working in games and VFX. Rizom-Lab was founded in 2016 as a new parent company for the Unfold3D UV mapping software.

Composed of a fast, distortion-less unwrapping algorithm, Unfold3D has been adopted at companies like Electronic Arts, Ubisoft, Animal Logic and The Mill. In V10, Unfold3D’s core system has been updated and expanded, but the functionality itself remains the same in both applications, and supports consistency among products. Using Live Cutting, Unfold3D will now update unwrapping interactively during cut and weld operations. 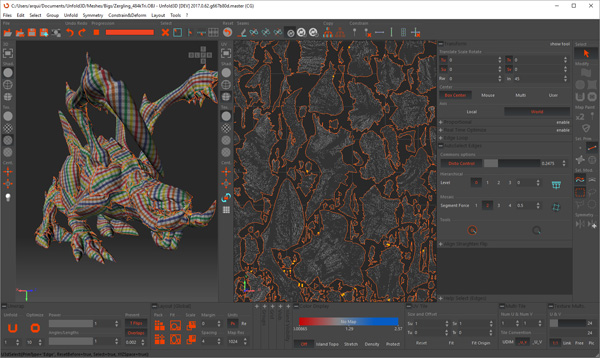 Auto Seams in Unfold3D can automatically generate seams designed for characters, manufactured objects, trees and large terrains. Smart segmentation is able to divide models in a single step. Hierarchical Autoseams, on the other hand, looks for the simplest seam line network that can open your mesh without segmenting it into several separated parts, resulting in a flattened shape. If models are symmetrical, the generated seam network will be as well.

Mosaïc Autoseams will look for  surfaces of a mesh that can be developed and then create new islands. The Disto Control function evaluates the distortion created by the current seams and adds cuts if the distorsion is beyond an acceptable level, which the user defines with a dedicated slider.

“The more complex the mesh geometry is, with protruding parts or cavities, for example, the more it will need to be cut into separated islands,” Remi said. “Also known as shells, islands are connected sets of polygons. Island frontiers are their limit, when they are constituted by a closed path of edges. For instance, an island with the geometry of a disk, has a circular frontier.

“Conversely, a closed sphere has no frontier, so users will have to open it by making a cut that allows it to be flattened. In Unfold3D, the artist can set parameters for algorithms controlling how the cuts are made, or set the cut semi-automatically or even cut manually if needed, using selection tools.” 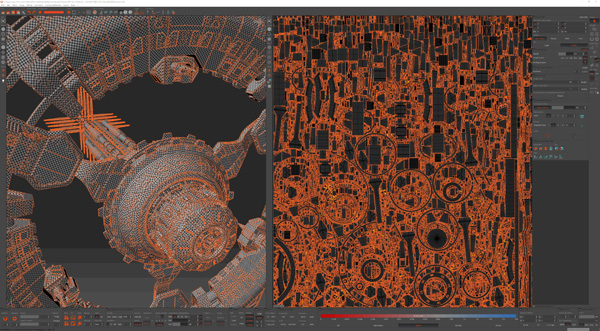 To help manage islands, a new, fast packaging tool called Pack can be applied to a single 0, 1 tile, or a configurable UDIM layout. Pack finds the best place, orientation and scale for a model's islands, testing millions of combinations so that wasted space is minimized. It can pack island groups, place islands around locked islands and recursively fill an island’s holes and concave areas with smaller islands.

Island groups can be defined from island selections, each with specific packing properties such as boxed, locked or unlocked, stacked, mutation count and others. Unfold3D can also create groups using the model’s materials ID, including smoothing groups. Welding can now be completed by selecting islands and clicking a button, without relying on edge selection.

API support allows the Unfold3D C++ Library to be adapted to most professional pipelines and software. Users can integrate Unfold3D into workflows using LUA scripting to automate many tasks, loading and saving OBJ and FBX files with poly-materials, poly-groups and smoothing groups.

Remi said, “In fact, everything can be done without any scripts using the user interface. Typically, simple meshes will require very few clicks to generate their UV maps automatically. With more complex ones, the more precise users will use the hundred of controllers and selection tools to get exactly what they want in a semi-automatic fashion. However scripting all of these choices in LUA is possible if preferred. 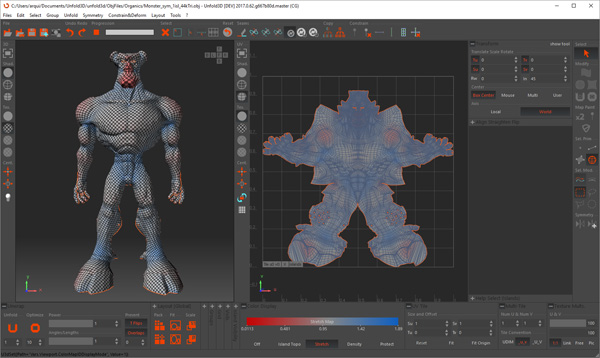 A series of Unfold3D tutorials are available now on the Rizom-Lab YouTube channel.
Unfold3D V10 is available now for Windows and Mac OS users. Unfold3D VS and RS can be purchased as perpetual licenses or on a monthly, rent-to-own basis.  www.unfold3d.com