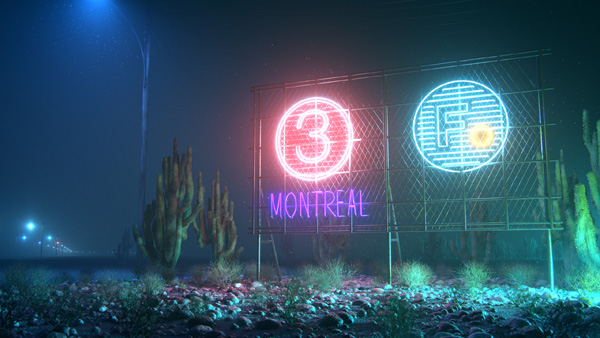 Hydra works as a uniform drawing framework that can combine multiple scenegraph inputs into a single render pass and can share and aggregate GPU resources. It handles both dynamically changing scenes – that is, time-varying changes - and cached playback. Katana includes new transform handles and an API for creating custom object drawing and manipulators for the viewer.

Noting that software is only as practical as its performance speeds, Katana's developers say the new viewport is 7 to 10 times faster, and that Katana 3.0 now starts up and loads files 1.5 times faster than previous versions. General performance has also been improved through specific changes to its main functionality like CEL, OpScript and Alembic processing. 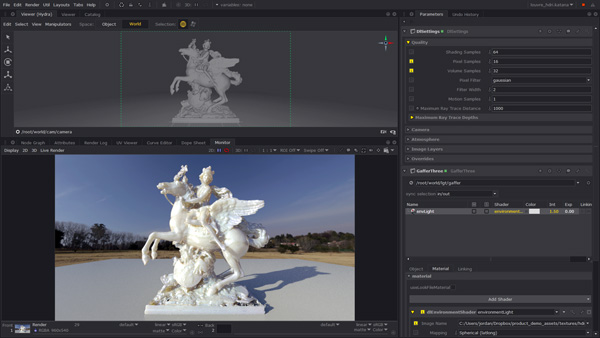 Foundry has updated the design of the Katana user interface with new object transform tools, and made the graphics easier to interpret so that information is accessible at a glance. The idea is to align artist-driven workflows and UX more closely with Katana’s technical foundation.

Katana 3.0 is now supplied with the 3Delight rendering plugin for production live rendering. Users can either carry out live rendering free of charge for individual interactive renders, or go for an option for affordable batch renders. The plugin is powered by the Nodal Scene Interface (NSI), a hierarchical API that supports interactive live rendering and can take advantage of Katana’s rendering APIs.

Katana and 3Delight’s approach to look development and lighting tasks is geometry-based, supporting the use of physical techniques. Artists are catered for with a simpler set of controls and workflows, and physical phenomena like volumes have precise, art directable parameters for transparency and scattering, but still use physically correct maths. Users can click and drag on top of an image to rebalance light intensities of individual or groups of lights.

Mari 4.1 aims to improve and speed up working with colours in Mari, and give artists more control over results. Previously, colours remained constant but would change visually, or perceptually, when you switched to a channel in a different colourspace. This also affected colours you save to the function Shelf, depending on which channel was active at the time of saving and time of choosing the colour. By the time a project is finished, colours could end up looking quite different than intended. 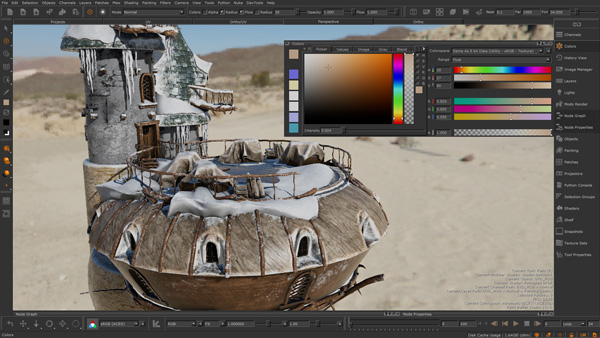 Now when switching between channels with different colourspaces, Mari calculates new colour values to achieve a constant perceptual colour matching the original. This is achieved with a constant Colour Picking colourspace. Mari no longer changes the space to match the current target. Instead it use the same space set as a default in the project for 8-bit channels. If you do want to pick the exact colour in the target channel's colourspace you can use the new Colour Values Picker tab in the palette, where you can pick values in either the source or target space.

A new Scalar Monitor Colourspace is now part of the new view transform, or V-transform, toolbar so you can view scalar data perceptually or linearly to suit your current task. When viewing a scalar channel, a linear ramp  appears as it does in other 8-bit imaging applications, rather than just raw data as Nuke does. The information Mari uses is still in the expected format.

The new V-transform toolbar is simpler and has a colour/scalar indicator – now you know whether you are viewing colour or scalar data just by checking the toolbar. You also have an option to change the colourspace used to display scalar data. Both colour and scalar modes have their own colourspace setting that can be changed independently. The Play Palette has been moved to regular toolbar that can be docked next to the V-transform toolbar.

The gain and gamma controls also work on scalar data. Visual property indicators are added to the channels palette to identify at a glance what bit-depth the channels are in and whether they contain colour or scalar data. 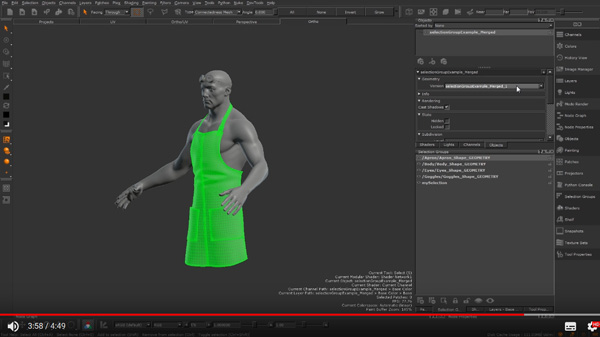 Colour attributes and procedurals in 4.0 had no context to show whether the colours chosen were to be used for colour or scalar channels – a problem when picking colours for a procedural in a different channel. In 4.1, a toggle explicitly sets the context for the procedural effect. By default, Mari detects the channel's colour/scalar data type and sets the toggles accordingly for layers created through the layers palette. For procedural nodes from a node graph, it defaults to colour data – thus, procedural nodes to be used as masks and scalar channels have to be set to scalar manually.

Mari now contains an OpenColorIO colourspace filter that allows you to convert paint target and buffer colours into another colourspace within the loaded OCIO configuration without affecting the channel settings.

New Selection Groups functionality means that when a new version of an object is added, Mari will attempt to match the selection group's membership across the new version - as long as both versions have the same topology. If you define the Selection Groups once, they will persist through all model vertex division and UV updates. In the Selection Groups palette, groups containing members not present in any active object versions are greyed out to show relevant groups more clearly.

The GPU-accelerated colourspace management system introduced for paint data has been extended to work with procedurals also, increasing Mari's performance when using tiles and triplanar procedurals. Further optimisations made to how Mari handles colourspaces result in faster load times.   www.foundry.com