Allegorithmic Substance Designer has a series of end-of-year updates that improve the responsiveness of its workflow, and include a new PBR rendering node that increases photorealism using a single map. Performance enhancements have also been put in place in preparation for future updates.

Users can now access the node list within a graph by hitting the tab key or spacebar. Graph tab control buttons are now on the tab itself, and graph controls can also be undocked. A new Graph Search Tool allows searching by labels, tags and function variables, as well as a node’s UID (unique identifier) in order to isolate and identify node error messages.

Selecting parent nodes is now easier - after selecting a node within a complex node graph, all connected parent nodes can also be revealed by highlighting the flow of connections. To improve a the readability of graphs, badges are added to nodes in the graph view that indicate which node is displayed in the 2D View, which is in the 3D view, and which is displayed in the Properties window. A further badge will also show whether a function error exists on a node. These badges can be switched on or off.

For users who like to create all-inclusive graphs – that is, with many layers of graphs, pixel processors and FX maps - secondary breadcrumb navigation is added so that content that would formerly appear in a new tab, is now visible in one coherent system. All elements will appear without opening a new tab, visible and editable in relation to each another. Users can also keep better track of where they are within the application.

The new PBR Render node can be used to render PBR materials - including base colour, metallic texture and roughness - at a level close to Iray. By dropping in a PBR material and an HDR map, a designer will be able to fully simulate all material lighting within one map. 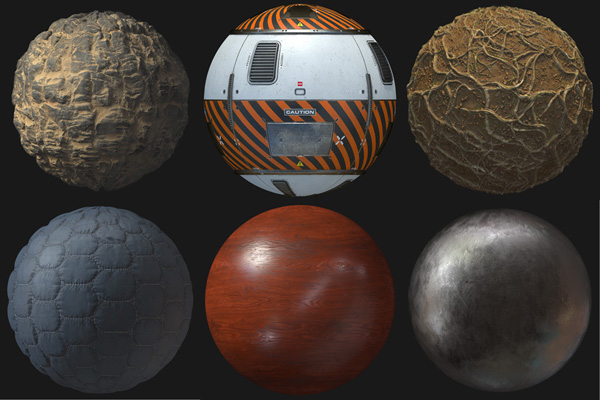 Following the introduction of Python API editing earlier this year, this Substance Designer update also adds the ability to create as well as edit data. Designers can now generate large numbers of iterations of a preselection node and introspect, or uncover, node properties without having to create the node itself.

Two elements that are not exposed in the API are the bakers and the 3D view. These features will be available shortly. Artists who have been using Substance Designer scripting capabilities before now may need to change their code somewhat - information is available in the application's internal documentation.

Also, due to the improvements made to real-time ray tracing by NVIDIA’s RTX developments, Allegorithmic made changes to the architecture of its bakers, which bake data from the mesh, in order to accommodate this new system. Allegorithmic says RTX users will experience speed increases immediately with baking times dropping from minutes to a few seconds. The architectural changes also increase the range of supported hardware, and prepare Substance Designer for other future enhancements and performance increases.   www.allegorithmic.com