The new Substance Engine v7 in Substance Designer has changed and simplified the material creation process by processing both values and textures, so that users do not need to rely on the PBR format.

Before this update, textures represented values. Substance Designer can now process these values directly during material creation, resulting in consistency across the pipeline. The software has a new Value Processor node that artists use to manipulate values from within the composite graph itself – where nodes are organised - which helps drive parameters and optimise workflows, and allowing more flexibility. Rather than working with nodes that represented elements, such as colour, users can add the colour value directly, making the design process more straightforward and controllable.

Users can also pass values from one node to another, and create global variables at the graph level. Over time, nodes and filters will be able to grow ‘smarter’ - able to recognise patterns - throughout the graph as they receive additional data. Substance Engine v7 will soon be compatible with all the Substance software integrations, so materials can be directly imported into mainstream content tools without extra adjustment.

Although Substance Engine v7 is Substance Designer’s main update, the package has several new filters, including two new Flood Fill variants – companion nodes including Flood Fill to Index, which generates user numbers per shape, and Flood Fill Mapper, which lets the users apply images to each shape. The Non-Uniform Direction Warp filter, on the other hand, allows the intensity and direction of the warp to be driven by an image input, and the Multi-Directional Warp applies the directional warp multiple times in opposite directions while the displaced texture stays in place.

Users can now divide or split an Atlas in order to isolate and exploit the separate elements of a scan, and height maps can be rendered as 3D depth, which allows users to rotate the resulting shape as a 3D object. An update to the Triplanar functionality makes a more accurate blending formula, random offset and separated inputs for x, y and z projections available.

Rather than setting the Normal Vector rotation angle by a uniform value, it can now be set using the grayscale value of an image input.

Along with these new functions, this update also brings several performance upgrades, including a substantial increase to the bakers. The integration of OptiX application acceleration engine, NVIDIA’s ray tracing API, for the AO, Bent Normal and Thickness bakers will now produce speeds several times times faster than CPU ray tracing. The .obj loader has also been optimised and multi-threaded, leading to a significant decrease in loading times. 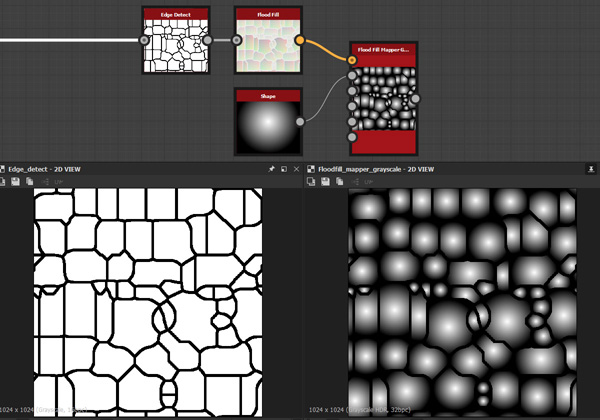 For technical users, this update is expected to expand options in the Python Scripting plugin system. Users can now create GUIs for plugins within Substance Designer using the Python API. The plugin system has also been standardised in order for plugins to start when the application loads, helping developers to create persistent plugins. Further plugins created by the Substance team are now in development as well to be released shortly. The new update to Substance Designer is available to subscribers now.  allegorithmic.com