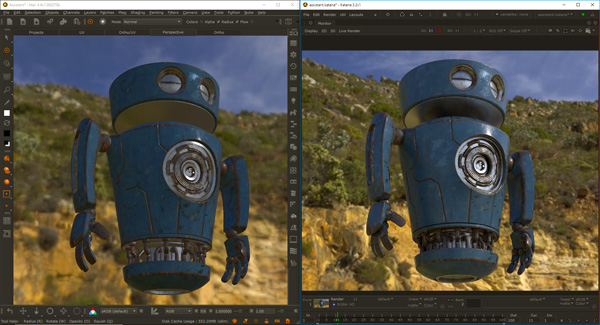 Foundry Mari 4.6 includes new developments in the software’s Material System, and Geo-Channels that can be integrated into material presets as a way to drive looks and effects. Version 4.6 also adds new procedural patterns and filters that give artists extra options for procedural workflows, and shader collaborations with third-party vendors 3Delight and V-Ray.

The integration of Geo-Channels into the Materials System makes it possible to drive material looks with mesh maps, like Curvature and AmbientOcclusion. Geo-Channels are slots on objects for storing mesh-specific texture maps, either imported from disk or exported from the project. As a result, artists can dynamically inject the mesh maps directly into the Node Graph or Layerstack as Geo-Channel Nodes - layers display the texture map of any Geo-Channel when the user selects the map name. 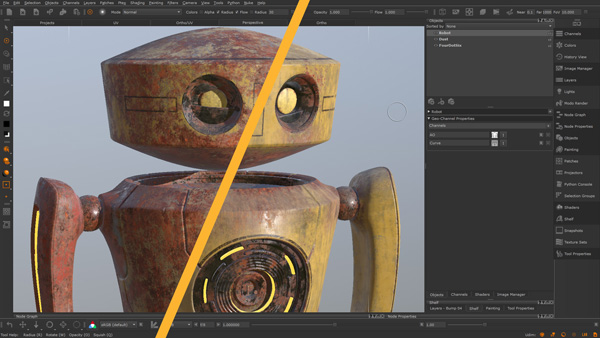 To sync networks to Geo-Channels, artists can use new Sync on Bake options in Mari’s Bake Point node to share the results of a graph network across the current project to all receiving Geo-Channel nodes. The channels can be used as a caching point, and are a neater way to share complex nodes than sharing connections in the Node Graph.

To improve the Materials System that was added to Mari in v4.5, new Material file icons and extensions to the Material Ingest Tool allow artists to customise and further automate Material creation. The Material Ingest Tool can now search for a thumbnail on disk, using the new thumbnail naming convention search field, when searching for PBR texture map sets. Artists can use the Tool to display a table of found PBR texture sets, based on the set search criteria in the UI. The Ingest Tool can also use Custom Material Templates, allowing more bespoke, automated creation of complex baseline generated material presets. 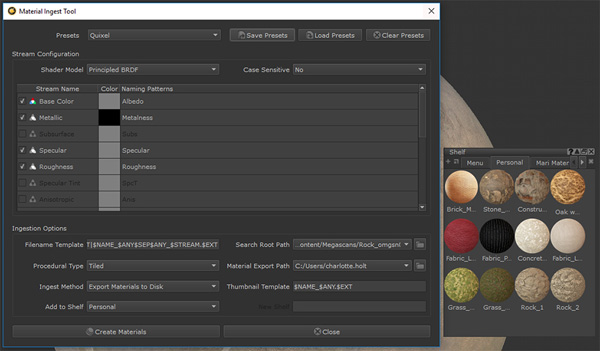 The Material Ingest Tool can now search for a thumbnail on disk.

Users can customise generated Material Thumbnails with Mari by setting the model, camera and environment in Mari’s preferences. Custom Geo-Channels may also be added (see above), and used for material preset icon generation.

Mari 4.6 makes navigation in the node graph more efficient and straightforward. Users have three varying states of collapse for all nodes, plus a mode for material nodes that manages parallel streams, and node auto-placement to help design better layouts of complex node networks.

The Fully Expanded option for collapsible nodes shows all ports, the Connected Only option displays ports that are connected to other nodes, and Fully Collapsed hides all ports, only showing incoming and outgoing connections to the node’s title bar. 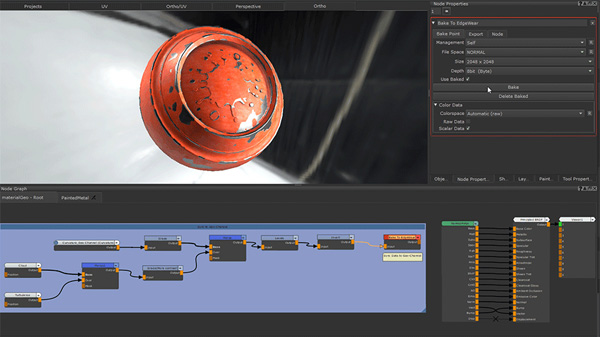 Sync on Bake options in Mari’s Bake Point node share the results of a graph network across the current project.

Further to these states, the new stream collapsed mode for multi-channel nodes saves space in the node graph by grouping parallel stream connections into a single connection. By keeping all stream ports represented by this one connection under the hood, artists can navigate material-based projects more efficiently.

The autoplace logic in Mari 4.6 has also changed and now aligns all upstream nodes into equally spaced columns, with merge node chains forming a backbone along the top of the layout that should be easier to follow. 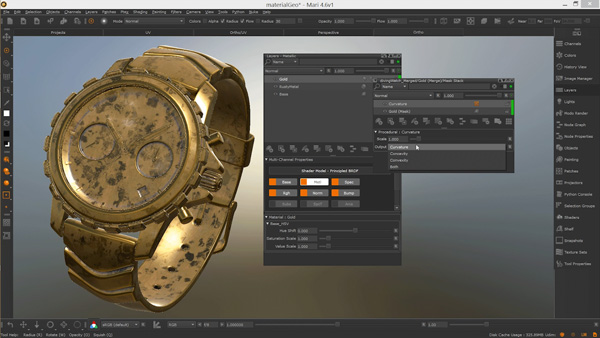 Curvature masks models according to curvature.

New Fractal nodes, like the new Marble fractal, use the fBm and Voronoi fractal algorithms to generate organic patterns. New Patterns include conventional Bricks, Checkerboard, Scratches and Weave, and a further pattern node, AtlasRandom, randomises the input image which can then be used with other procedurals. 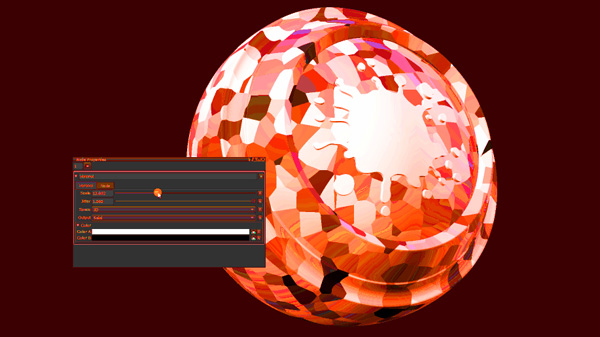 Accompanying Constant nodes are no longer necessary for Math Operators in Mari. The existing operators like Add and Multiply now have default values instead. The operators list has been extended as well with new Ceil, Distance, Floor, Fract, Length, Mix, Mod, Normalize, Pow, Sqrt and VectorDot operators for procedural networks.

Among the new utility nodes are the node pair VectorSplit and VectorCombine. These can be used to break apart RGB paint textures into their components (channels) so they can be edited in isolation, and then recombined. Also, the new node NormalStrength can intensify or soften normal texture maps. 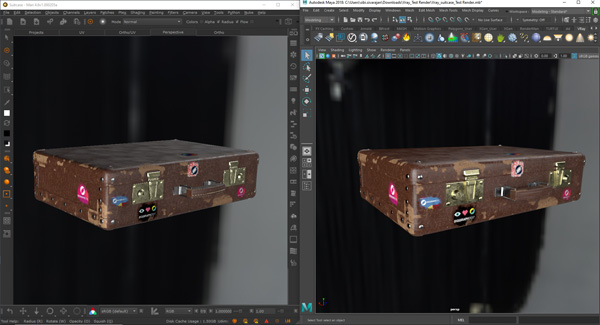 Artists can achieve closer approximations for renders in Mari owing to matching GLSL vendor shaders contributed from 3Delight, 3Delight Surface Shader, and V-Ray, VRayMtl. Such shaders can speed up look development across Mari and Katana by reducing the need to round-trip between the two applications and other DCC programs. Artists can paint with more certainty that the results will look correct in the final render.

After introducing the Arnold shader from the Autodesk team in Mari 4.5, Foundry are continuing third-party collaborations with a Mari version of the Renderman PxrSurface shader in their new release.  www.foundry.com