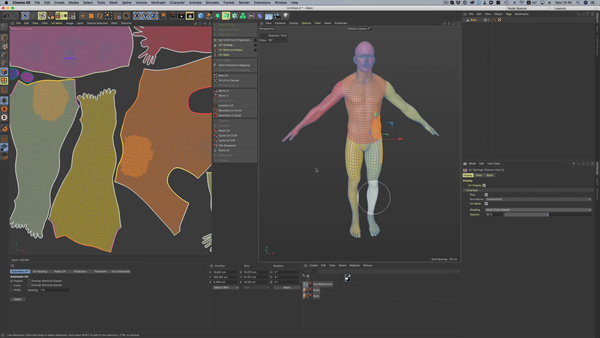 The new version of Maxon Cinema 4D is a subscription-only release that gives subscription customers early access to the next series of updates. These include UV unwrapping and editing tools, changes to the selection and modelling tool functionality, organisational licensing for volume customers and new viewport functionality with support for Apple Metal on macOS.

Cinema 4D’s compatibility within pipelines has also been extended, with GLTF export, GoZ integration with ZBrush and support for node-based materials in FBX and Cineware.

Cinema 4D S22 is immediately available for subscription customers. For perpetual license holders of Cinema 4D, a release planned for later in the year will incorporate the features of S22, plus some further updates. 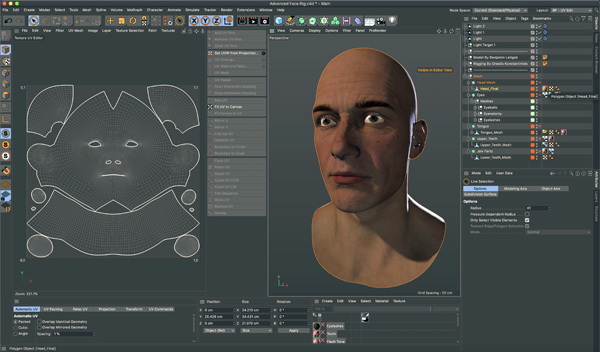 Due to a new automatic UV unwrapping option, Cinema 4D’s unwrapping workflow now makes it simpler to define a UV map, and new packing algorithms optimise texture resolution. The automated option, UV Auto Unwrapping, is based on a system licensed from the Ministry of Flat developed by Eskil Steenberg of Quel Solaar, achieving basic unwraps with minimal distortion and overlaps for baking and texture painting.

This tool cuts the UVs and wraps and packs them in one step. It can be accessed in several places in Cinema 4D as you work and uses intelligent geometry analysis to define where the UV cuts should occur, aiming to retain continuity between relatively flat surfaces.

Packing is made more efficient by using the gaps inside unwrapped islands and concave areas, and removes polygon overlaps, making sure the process will take advantage of all the UV tile real estate and, for smaller image files, allowing you to increase texture quality. UV Auto Unwrap can be used directly from the UV tab in the UV edit layout, or via the Body Paint paint set-up wizard, the UVW front projection tool and the Bake object tool. 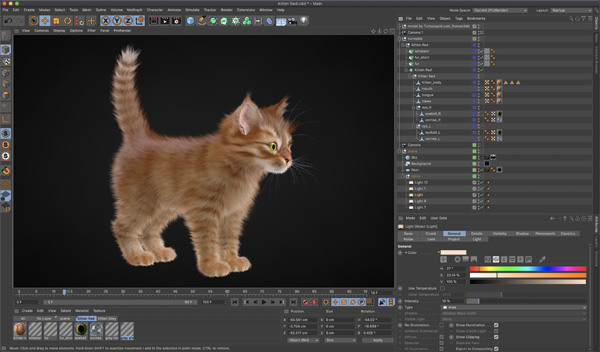 Furrier hair in the viewport

Cinema 4D's new viewport infrastructure is re-developed as a framework to make the best use of graphics systems in the near future, with full support for Apple Metal, resulting in near-direct access to the GPU. Scenes and models look much closer to the final result, especially hair and fur.

More working options are available. For example, users can copy and use all effects from the viewport, and apply a geometry-only mode for a clean result – in one click. Your own viewport preferences can be saved and loaded as a preset filter, eliminating the unwanted effects.

Performance of multiple instances – including render instances – is improved, and overall viewport speed is much faster. Shadow colour, like light passing through coloured glass, and gradients used in the bump channel are now directly represented in the viewport. Increasing the shadow map size, as well as the alternative shadow filtering option, results in more accurate shadows. The physical sky shadow is also improved. 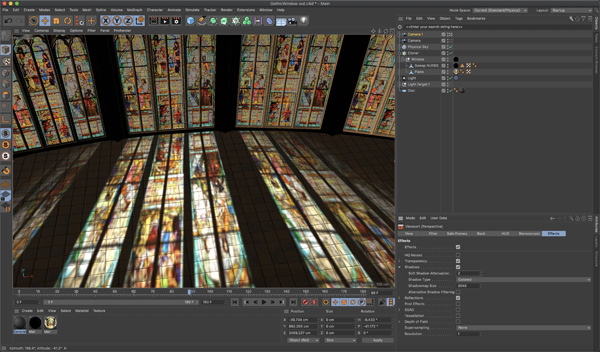 Coloured shadow in the viewport

For better pipeline compatibility with Cinema 4D, S22 adds a glTF exporter,  ZBrush GoZ Bridge and support for Nodal materials within FBX and Cineware, expanding the pipeline for advanced materials.

A new built-in glTF exporter in S22 makes it easier to export Cinema 4D files to use in game engines and augmented reality applications like Unreal, Unity, Adobe Aero or other proprietary AR software. The glTF specification was developed for the efficient transmission and loading of 3D scenes and models into and between different applications. glTF export with S22 is quick and you can use special websites like sandbox.babylonjs.com to preview the glTF files. You can also create AR experiences via mobile apps like Adobe Aero.

S22 also has a built-in ZBrush GoZ Bridge, located in the extensions menu. With one click you can send a 3D model to ZBrush, do any speciality sculpting and 3D painting modifications required, and send it back with another click to C4D for integration with the rest of the scene. You can set parameters for the import and export in C4D’s preferences for scale, colour, normal and displacement maps and UVs. If needed, it supports huge models with millions of polygons and also polypaint and polygroup information. 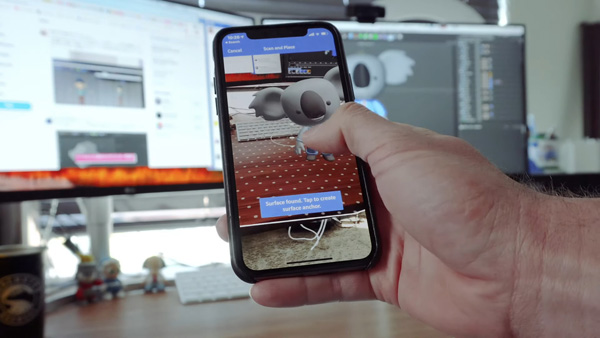 Modelling Updates for Control and Complexity

The new modelling architecture in S22 makes tools faster and more robust, and better able to preserve mesh attributes. Updates to the loop and ring selection tool speed up the selection workflow for modelling and for UV unwrapping. Once you have created selections for one side of the model you can mirror them to the other side, using a new mirror selection tool. The bevel tool and deformer are now faster, and produce very clean UVs.

New tools like the interactive and triangulate command clean up triangulated meshes as they come from CAD and other applications. The updated bridge tool allows interactive adjustment at subdivisions for more control and works much faster, especially on high outline polycounts. The interfaces of the extrude, inner extrude and smooth shift tool are now slider based and more precise. 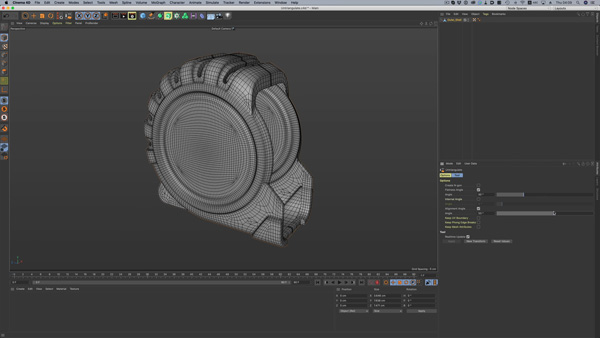 Many modelling tools and commands now work faster in complex situations and all will preserve surface attributes such as UVs, vertex maps and vertex colours. For example, the updated extrude generator detects the alignment of splines and automatically extrudes them in the right direction so you only need to define the offset. This also works with hierarchical set-ups.

Volume License Customers can access organisational accounts within the MyMaxon system to assign licenses to individual users or groups, so that you have the flexibility of floating licenses with the accessibility of Maxon’s servers.   www.maxon.net 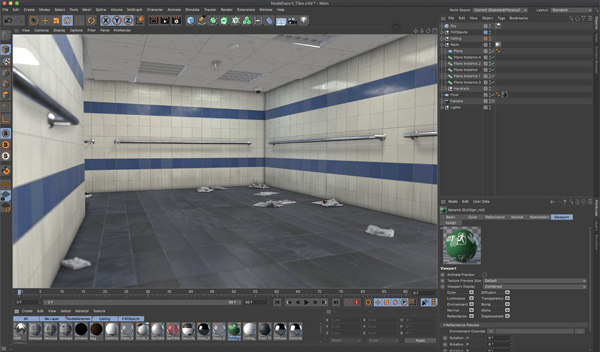 New support for Nodal materials within FBX and Cineware. 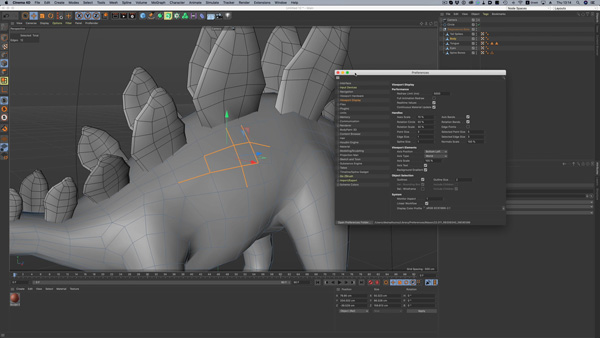