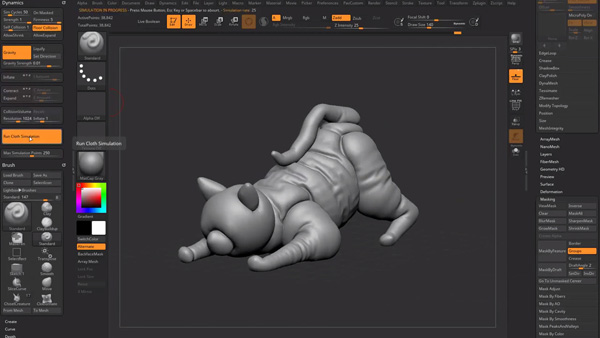 ZBrush 2021 adds a new Dynamics system to its functionality, with Controlled Cloth Sculpting and revisions to its Dynamic Subdivision capabilities. Zmodeler has new tools, and the ZBrush engine itself has also been upgraded, aiming to improve performance across most functions. ZBrush 2021 sculpts more fluidly, and takes less time to perform operations such as the DynaMesh base mesh generation tool.

The new Dynamics system allows any surface to be contracted, expanded, inflated or draped with gravity. Using masking, you can pin a portion of the mesh to create a point of interest or use a mask to create an interaction that allows the surface to be rolled on itself. Realistic cloth folds can be created, even on a low resolution plane. Once the mesh is in place, you can start the collision volume and with specific controls, and allow ZBrush to drape the cloth mesh over other visible meshes.

To interact with the cloth surface, special brushes have been introduced that use the Dynamics engine. You can, for instance, choose where folds will lay or control the geometry to move it freely in the work space and create the folds in real-time. The ClothTwister brush simulates twisted cloth. ClothWind allows directional movement. ClothPinchTrails will create a seam with pinched cloth wherever your brush stroke occurs on the surface. 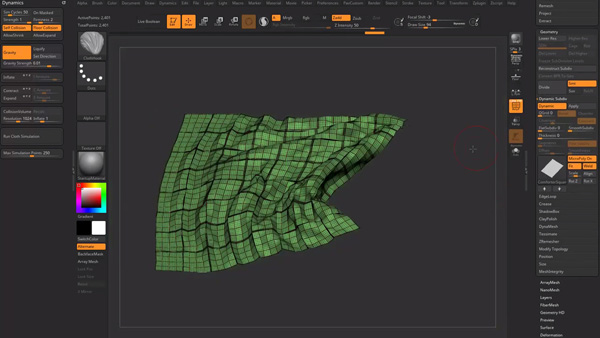 Dynamic Subdiv produces a working preview of subdivision levels without actually increasing the base polygon count. This feature has now been extended so that artists can add an adjustable thickness to any single piece of planar geometry.

A piece of geometry can also be added to each polygon as a completely interactive instance. A library of presets is supplied with different looks for the surface – it can be made to look like canvas or denim, for example.

The systems behind the sculpting brushes have been revised to enhance performance. Speed has increased across most functions including faster response time from high polygon models, increased DynaMesh speed and others. A new Optimal option for smart management of multithreading consistently maintains the optimum number of threads ZBrush needs within the user’s system for the best performance.

Two new functions have been added to the ZModeler brush system, which has a set of polygonal modeling functions that quickly generate many different shapes. Users can model at extremely low resolutions with enough control to create a base mesh or object with as few polygons as possible. Its precise snapping ability makes it easier to create holes, add edge loops and so on. 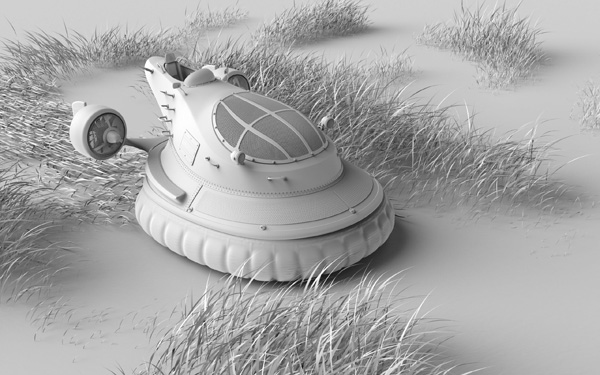 The new Zmodeler Extrude Edge tool allows you to build up a plane or construct new geometry to fit into an existing sculpt. From one edge, you can build multiple edges, complete edge loops and/or polyloops with interactive edge snapping. For example, you can extrude an edge to snap to the adjacent face as well as use SnapToSurface to allow the new edges to snap to an underlying surface.

Another new Zmodeler tool is Equidistant Inset, used to inset a single polygon or region of polygons. From there, all newly created topology will be equidistant from the existing topology, resulting in a complete new set of polygons.

To expand the NanoMesh instancing system, in ZBrush 2021 it is now possible to edit the instance mesh while it is in place within the scene. Combining Split Screen with NanoMesh, this update gives the user more options for creating and adjusting the mesh without adding an unmanageable amount of polygons. 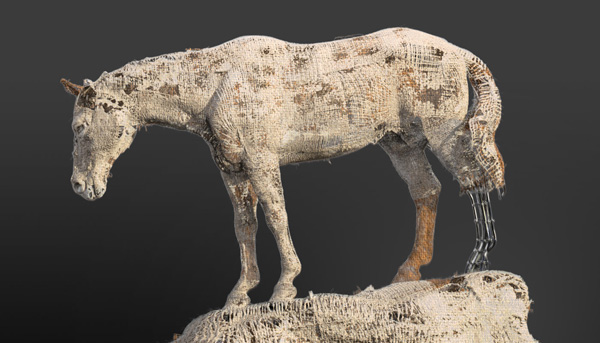 iMage 3D support is now available to ZBrush, giving it the ability to open native-format files created by ZbrushCoreMini. A simplified version of ZBrush for beginning 3D artists, ZbrushCoreMini has a smaller, less challenging selection of digital sculpting brushes from ZBrush.

Its iMage 3D format is a convenient way to share both an image of the user's work and the 3D model itself with other artists, combined into a single GIF or PNG file. This file can be posted on websites where it will appear as a regular 2D image and, once opened in ZBrush, the complete model with all its SubTools is ready to edit.  pixologic.com