Foundry Shines a Light on Katana 4.0 for Lighting and LookDev 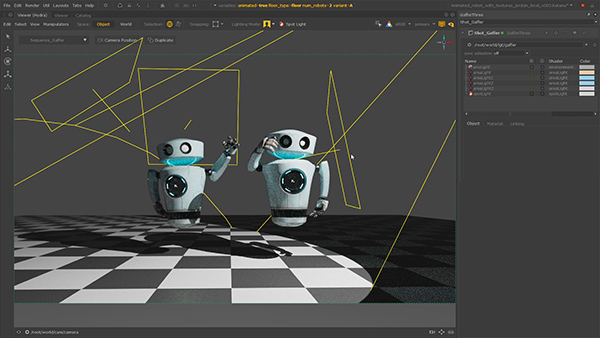 Katana lighting and look development software has been in development at Foundry for about 10 years. The Foundry team has continued to make regular updates during that time, the most recent of which have been versions 3.5, bringing multi-threading, the Monitor Layer and support for USD 19.11, and 3.6 when snapping, the Network Material Edit tool, a dockable UI and support for 3Delight 2.0 were added.

In a recent interview with Digital Media World, Jordan Thistlewood, Director of Product – Pre-production, LookDev & Lighting at Foundry said that their upgrades to Katana tend to fall into three main themes – improving the underlying approaches to artists’ challenges, enhancing performance and refining the user experience.

He said, “Changes to the underlying functionality re-shape Katana in response to changes in the demands placed on artists over time, but do not change its fundamental architecture, which is very solid and robust. We are mainly adding more modern approaches to the programming. Performance upgrades take advantage of Katana’s ability to handle massive, complex projects across many shots – and expand on it as people’s understanding of a ‘really big show’ continues to grow.

“Examples of how Foundry addresses UX upgrades in Katana are the Hydra Viewport, the change to Qt UI plugins and the Network Material Create tool, which are the new shading nodes added in 3.2. Changes don’t always happen in one step. Ahead of the Hydra Viewport, for instance, an API was added in 2.6 that allowed users to add their own viewer and meanwhile allowed Foundry developers to add the Monitor Layer in v3.5.”

It’s also interesting to know that Katana’s API draws the Viewport in layers such as the 3D Open GL geometry layer, the handles and so on. It looks like a single Viewport to the user, but is in fact a series of layers. 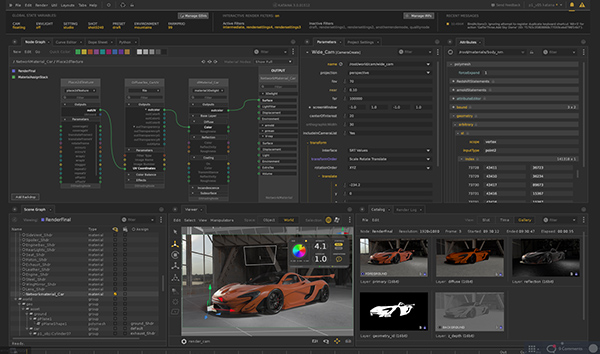 Artists always have the potential to display complex workflows by visualising in the Katana UI anything or everything happening in the project. Jordan said, “That may sound useful, but would be overwhelming, and wouldn’t help lighting, look development or digital cinematography artists to do their jobs more efficiently or any better. Such artists need space to be creative on screen and need to see the image they are working on, larger and more clearly than anything else.”

This need has led to the development of a far less cluttered view in Katana 4.0, streamlined per user, with relevant information accessed through small HUDs, trimmed down for a specific purpose. Selection tools are available for portions of images, and users can interact with 3D objects, like lights – all functions are there close by, instead of spread across multiple monitors. Foundry also wanted to design the system to suit people currently working on Wacom tablets, or who plan to in the future, leading to UX combinations that would be easy both on a mouse and with a Wacom pen.

The Viewport improvements in Katana 4.0 concern the way artists interact with scenes. “Typically, you will see 3D models drawn up in a game-style system – this is a fairly quick approach and allows selections but does not scale well for complex crowded scenes, Drawing extensive geometry for OpenGL would bog the processor down. While raytracing cuts through the complexity and produces a beautiful result, it is slower. 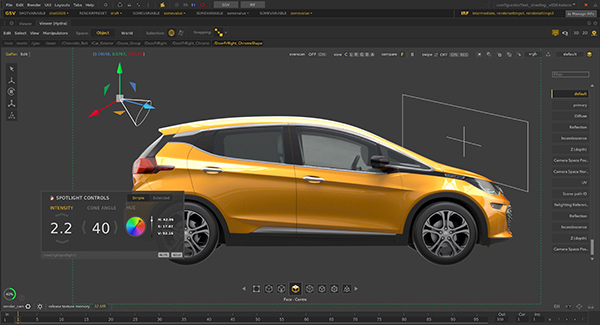 Katana now supports both methods in the Viewport. But both still need a way for artists to interact with selections. So, Foundry took Katana’s ability to select items from a render, and moved it into the Viewport. Whether an artist is working with the OpenGL geometry OR a raytraced imge, he or she can interact and select parts of it natively without choosing a particular method, and both have the same workflow.

An example would be a large, crowded scene with, say, 100,000 characters. The artist can render and see the result in the Viewport – and can still select and work on a single character from that render in Katana. It isn’t necessary to track the separate elements from the hierarchy.

Katana 4.0 has an Artist-focussed Lighting Mode that allows artists to think and act like cinematographers do on set and to use the application as a digital cinematography platform. For example, cinematographers will put a lamp in a scene, calling for a light fixture that exposes correctly and looks lit. They then think of the way the lamp will light the characters and scene, and what other off-camera light sources may be needed to achieve the effect they want, while still looking as though the scene is lit by the lamp.

“This is a typical process on a real set,” said Jordan. “In Katana, artists have access to modes and HUDs allowing them to place lights according to either where they want the light to fall OR where a light source is located in 3D space. Once the locations are selected, Katana handles the scene lighting.

“When the environment light is designed correctly, the area lights can be defined. This means that a higher priority can be given to how light strikes, wraps around or otherwise affects an asset or scene, than where a lamp sits in 3D space. For all of this work, artists have the small, specific HUDs to control intensity, exposure, colour, spread and so on, similar to working at a lighting mixer on set. Artists can also still clone and duplicate lights as usual – with all relevant controls directly in front of them.”

You might also choose to create a light that hits the scene at a certain angle that will be seen through a given camera position. Given those parameters, Katana can place the light to match. It removes much of the mechanical work – that is, the steps needed to feed in precise values – so that you can light the way you think.

Jordan commented that meanwhile, render engines are also developing in a similar ‘on-set’ way. He said, “It’s no longer always necessary to break down and recreate the physics of a lighting scenario. Once you place a light, tweaking and adjusting it according to how the light bounces through the scene as you work is always possible, but Katana is taking advantage of what the new rendering developments can achieve.” Since Katana has always been renderer agnostic, supporting 3Delight, Arnold, Redshift, RenderMan and V-Ray, all the new tools likewise work with each renderer plugin as well.

A new Light and Shadow Pattern tool is based on a similar approach. When casting shadows in a scene, the user can select a point on an object to cast a shadow and then select where the shadow should fall, for example, sending a shadow across a character’s face. The light will be placed accordingly. A certain amount of interaction is still needed to refine the look, but each iteration is used more effectively to arrive at the ones that follow.

Foundry has developed Multiple Simultaneous Renders to make rendering more productive for lighting artists. Earlier, it was necessary to complete, or cancel, one full render before you could stop, look, adjust and then do another. But Katana has its own separate rendering program, which feeds the rendered images back to the main Katana program UI.

“That separation allows a greater flow of traffic back to Katana and supports simultaneous renders, which means you can compare two renders more readily and toggle between them while they are processing,” said Jordan. “You can have several tasks underway at once on files from the same project. Katana accomplishes this kind of work very well, keeping multiple jobs on the go from one project file, such as a number of shots or asset setups for an animation.”

To use simultaneous rendering at scale, Katana has a queuing system for controlling a series of renders and showing their status in resizable thumbnails. Instead of just waiting out the processing time, artists can watch progress under different lighting set ups, for example, or for grouped assets, when a change is made on one, Katana will allow it to affect the others in the group while the render carries on.

Also called Katana Foresight, the new workflows give artists the foresight to make the right choices, earlier in a project, and take a level of guess work out of rendering. It also makes use of all your processing cores while you figure out what to do next!

To help users follow the renders visually as they proceed, and make faster, better decisions, Foundry is planning to ship a Contact Sheet mode with version 4.1, similar to the contact sheet in 3Delight.

Scalable Interactive Network Rendering is another new workflow that helps artists make decisions earlier on with less iteration by giving them the option to use external machines to complete specific renders. At times, artists are constrained by lack of horsepower and the cost of rendering any single item. Now, they can connect those tasks, including a series of simultaneous renders, to a render farm where the work can be distributed across machines to access as much power per render as possible. Less waiting for results makes the connection between user, software and hardware more direct.

Into the future, further extension of the new rendering capabilities is high on the agenda for Katana. Foundry is now working on Multiple Live Renders, for which ‘live’ refers to making changes during rendering and letting the render refresh as it proceeds. “Currently, Katana supports only one live render at a time, but the architecture could support multiple renders at once. The artist would make a change and then watch how it looks in all versions, adjusting each one as it goes,” said Jordan.

“The upcoming contact sheet mode, as well as the access to render farm capacity, should help this process. Having immediate feedback gives artists a level of freedom when taking a project further. We’re also planning a number of smaller upgrades to Katana 4.1 soon, ranging from using streaming to optimise network traffic, interacting with Nuke and Mari, and exporting information to and from Katana. The goal for all of this is to upgrade the way artists interact with their production work.

Katana 4.0 is expected to be released in October 2020. Foundry has also created a page where artists and readers can register their interest in Katana 4.0.  www.foundry.com/