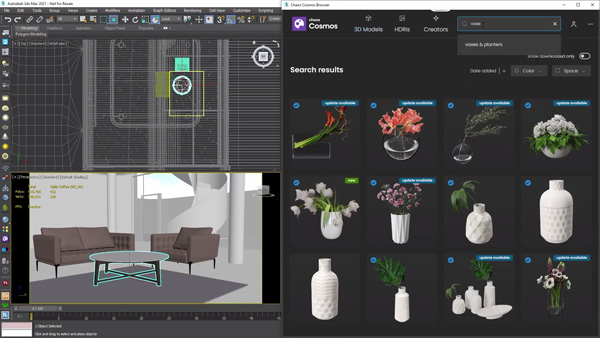 Chaos V-Ray 5 for 3ds Max, Update 1, now includes support for masking, new Progressive Caustics and improved translucent materials. Artists and designers can now do more from a single render, extending the visualisation tools to give more control to compositors.

With more support for masks in the new version of the V-Ray Frame Buffer (VFB), users can now fine-tune rendered images while making precise selections. All of V-Ray’s masking render elements including Cryptomatte, MultiMatte, Wirecolor and Object/Material/Render IDs are supported in the VFB render image holder window, which contains functionality for post processing adjustments to help finalise an image quickly without re-rendering or moving to another app.

Render Elements, like render passes, are a way to break renders out into component parts – reflections and shadows, diffuse colour, mattes and so on. They give fine control over the result during compositing when re-assembling the final image from its components. Among these elements, the Render Mask makes it possible to select a part of the image for re-rendering. It's more accurate and allows more control than Render Region to re-render just a few objects and not the whole scene again. 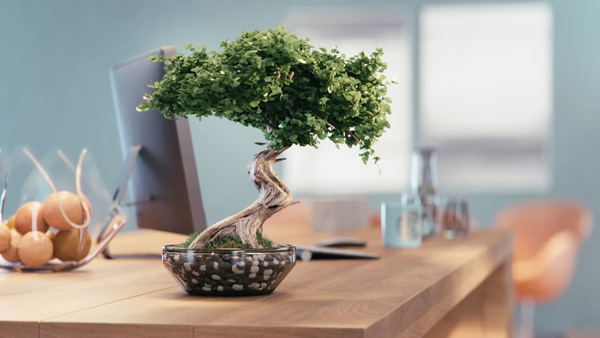 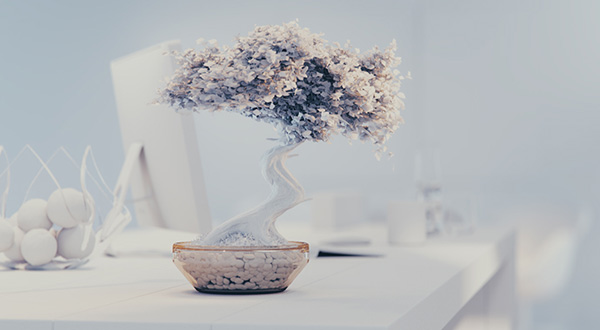 For example, with Multimatte, a single Red, Green or Blue channel can be used directly as a matte, so you don’t need to select the colour in the compositing software. To represent all the objects or materials with just red, green and blue, several Multimatte Render Elements can be generated for a single render, each with different Material ID or Object ID settings.

The Wire Color Render Element stores the wireframe colour of the object as set in the 3ds Max scene. As a flat colour without highlights or shadows, it can be used as a render element to generate masks for objects, used in compositing or colour correction.

Cryptomatte encodes mattes using automatically generated render channels stored in a OpenEXR file. Using the Cryptomatte plugin for NUKE or Fusion, mattes then can be extracted by directly selecting objects, instead of creating quaantities of Multimattes. 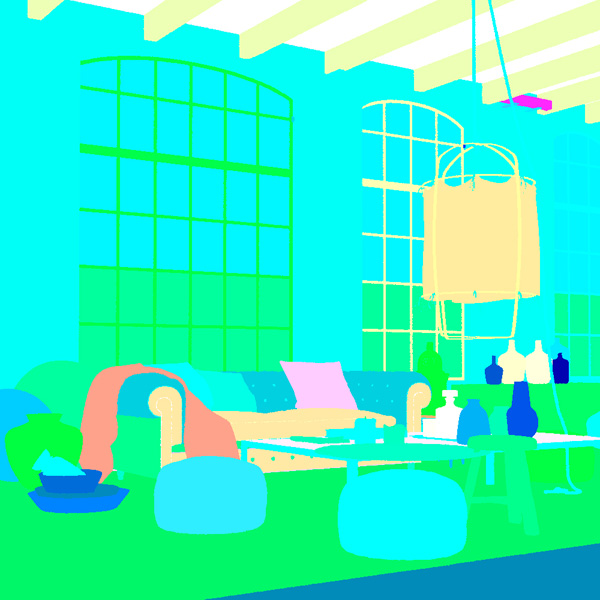 Additive Dome Lights can now be rendered at the same time to help simulate multiple lighting scenarios. Direct support in Light Mix makes it easier to fine-tune the results.

Light Mix takes advantage of the additive quality of light – that is, rendering an image with all its light sources turned on, and rendering separate images for each light source and compositing them together, yields the same result. Further to this, ray tracing makes it possible to track the full effect of each light on a rendered scene – reflection, refraction, diffuse and so on. 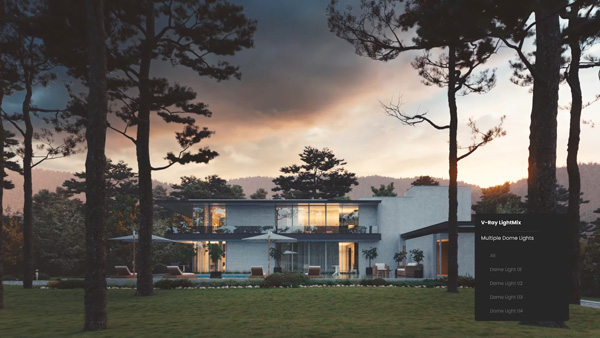 Combining this advantage of ray tracing with the additive nature of light means you can adjust the colour and intensity of lights even after rendering. The new VFB in V-Ray 5 adds lightweight compositing and image-editing tools, and can read the Light Mix selects and organise them into layers or groups, for instance, allowing users to manipulate the lighting as required, on the fly.

Chaos Cosmos, a new, render-ready 3D content collection, is now included within V-Ray 5 for 3ds Max. Tuned for interior and exterior architectural visualisations, the library includes hundreds of free 3D models and HDRI skies that can be inserted into scenes using V-Ray or the cosmos.chaos.com website itself, where users can browse, place and render 3D assets in their projects. The asset categories include Furniture, Accessories, People, Vegetation, Vehicles, HDRIs and others. The assets work directly in the Chaos V-Ray, V-Ray GPU and Vision renderers and host software – 3Ds Max, Revit, Rhino and Sketchup for now, with more to come. 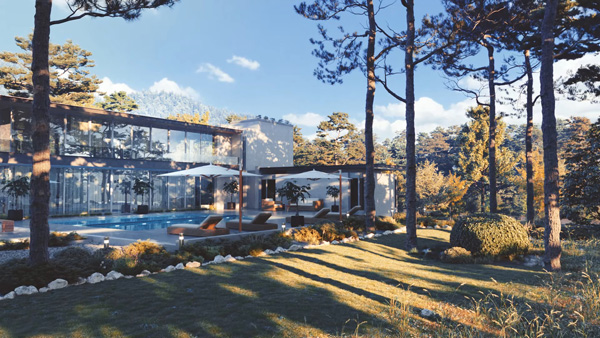 New translucency methods have been built into the V-Ray Material. With built-in subsurface scattering (SSS) and volumetric modes, it is easier to create true translucent materials such as plastic, wax and skin. A new material override option has been added as well, to help preserve a scene’s original opacity, bump, refraction and self-illumination and keep greater creative control.

Caustics in V-Ray can now be calculated progressively in a process that creates realistic reflections and refractions in less time. V-Ray normally uses two-pass photon mapping to calculate caustics. The first pass shoots light particles, or photons, from the light sources, tracing them as they bounce through the scene, and recording where they hit the object surfaces. The second pass is the final rendering, calculating the caustics based on the photon hits recorded during the first pass, and generating the photon map. Progressive caustics don’t need pre-calculated photon maps and so are easier and faster to set up. 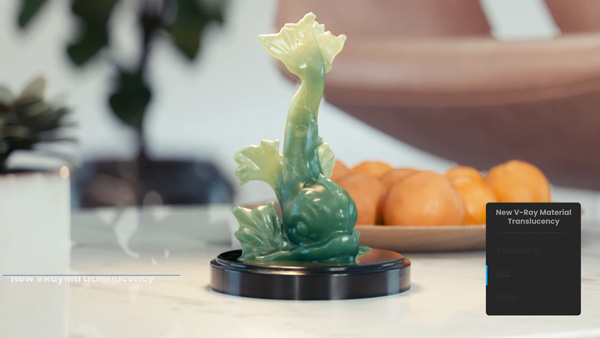 The V-Ray Light Cache now processes on V-Ray GPU, resulting in much faster render starts. Out of core now supports all V-Ray GPU features allowing any scene to exceed GPU memory for textures, geometry or both. The out of core capability renders scenes with GPUs that require more memory than is directly available through the main device. The intention is to use GPU RAM as a cache of the CPU RAM, where the scene is stored.

Users now have batch camera rendering so that they can export all of the cameras in their scene. This will make it easier for Chaos Cloud users to render any camera angle they need from a single export. The V-Ray Camera Lister allows you to manage the settings of multiple cameras, as well as copy and paste settings from one camera to another in a simple process through one interface. 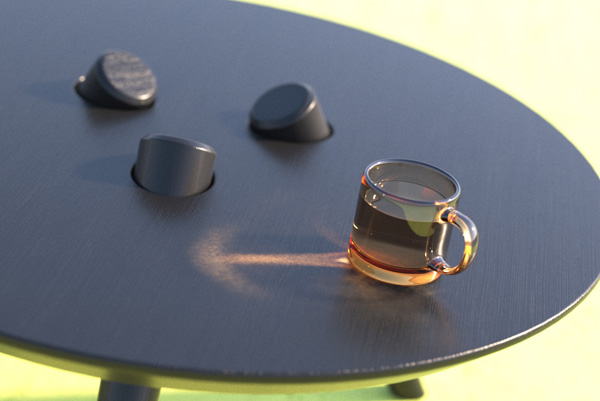 Simulations made with tyFlow, a particle simulation plugin suite for 3ds Max, can also be rendered with V-Ray GPU and Chaos Cloud. The Autodesk Physical Material is now auto-translated to V-Ray materials without needing additional conversions, and Intel Open Image Denoise can be used to quickly clean up noise on any machine.

Representations of V-Ray Materials will now appear more realistic in the 3ds Max viewport and look closer to the final render, giving artists a better idea of how their results will look.   www.chaosgroup.com