Resulting from joint development work between Pixar, Animal Logic, Luma Pictures and Blue Sky Studios, USD is now integrated into Maya, and can be used to load and edit massive datasets very rapidly. Due to the full integration, artists can then work directly with the data using Maya’s native tools.

The new mayaUsdProxyShape node enables native Maya workflows directly on USD stages, which are in-memory containers of the composed USD scenegraph. This means users can work directly with USD data in common Maya editors like the Viewport, Outliner, Attribute Editor, Manipulators, Snapping, and so on. Also the new USD Layer Editor allows you to create, view and manage a USD Stage’s complex LayerStack.

Other advantages of working with USD are robust referencing functionality, nondestructive data editing workflows and support for complex variants on top of USD, which make pipelines and collaboration more efficient to help teams scale for high-volume data workflows. 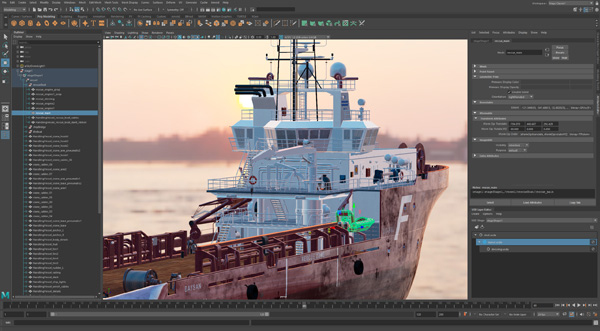 Users can import USD data as native Maya data, or export native Maya data as USD data, in effect using USD as a format for transferring data at high speed between Maya scenes or other applications that support USD.

A new USD Hierarchy View Window reveals a lightweight preview of USD scene structure, to show the contents of a USD file and set the state of the scene, including variants, before import. New features in Maya’s Outliner scene management editor make it possible to identify and work with USD data in the Outliner alongside standard Maya objects, such as different Data Branch colours, USD icons and badges and right-click contextual menus.

“Increasing support for open-source standards is a major area of focus for Autodesk, across all industries,” said Jocelyn Moffatt, Industry Marketing Manager, Entertainment. “The M&E team has worked toward USD integration, which is now crucial for innovation in visual effects and animation. Across tools, our goal is to simplify the complexities of working with massive datasets, aid in collaboration between artists and studios, and help teams creatively by managing technical pipeline challenges.” 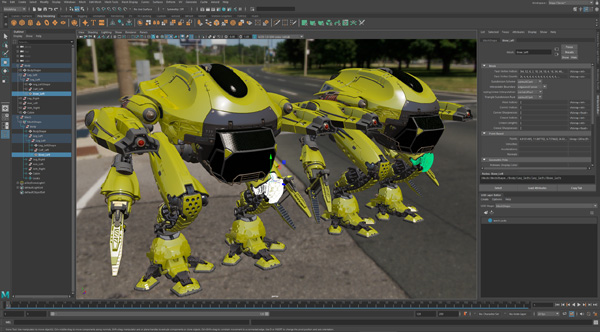 Paul Molodowitch, Lead Pipeline Technical Director, Luma Pictures, said, “We jumped at the opportunity to collaborate with Autodesk on USD for Maya, as we are strong believers in the power and usefulness of open-source projects. It was a complicated project to tackle, since it involved unifying the work of two separate codebases, and overseeing the contributions from many other sources.”

Among Maya’s animation tool updates is a new Ghosting Editor that allows artists to see animation spacing – the change in an object’s position from one frame to the next – over time, making it easier to see necessary edits and how poses work together in animations. The Time Editor has been improved with support for cached playback, without the need to playblast, and for additive animation clips. When a clip is set to ‘additive’, its motion can added on top of the motion of an underlying clip, to create a new animation. This can help keep the total number of clips low. 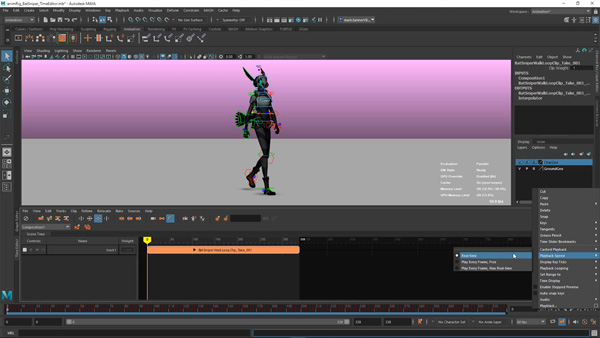 In the Graph Editor, which graphically represents the interpolation between keyframes as curves, filters are added to only display your selected animation curves. A new Peak Removal filter cleans up unwanted spikes and peaks in curves and the Smooth (Gaussian) filter improves control over the range and width of blur effects.

Maya 2022 has several procedural, topology-independent rigging workflows. Component Tags and Deformer Falloffs are new ways of defining membership and weighting, as well as seamlessly sharing that data between geometry and deformers. With Component Tags, geometry can store named sets of components directly on a shape node. The sets can then be passed to and used by other nodes. By reducing the number of nodes and connections required for deformation, the tags result in more efficient deformer graphs. 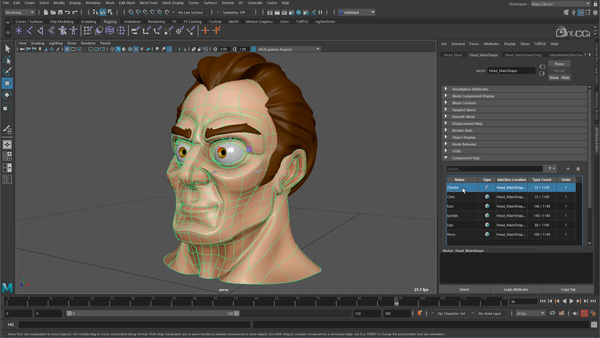 Deformer Falloffs can also be shared and reused in a topologically independent way with many commonly used deformers, including Skin Cluster, Cluster, BlendShape and all nonlinear deformers. Two new deformers have also been added – Solidify and Morph. The Morph deformer blends smoothly from one shape to another and, with the component lookup feature, morphs a shape using only a subset of its components.

Modelling and Rendering in Maya

Modellers in Maya have a new Sweep Mesh tool to procedurally generate geometry and adjust attributes such as profile shape and size. Using the new Game Vertex Count plugin, game artists are able to more accurately estimate how assets in Maya impact their in-game vertex count budgets – before exporting them to game engines. This feature also includes targeted settings for Unity and Unreal. 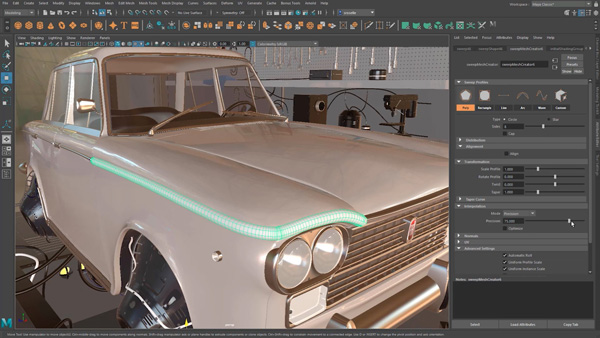 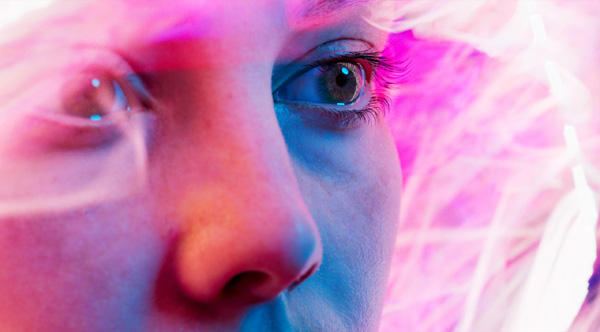 Overall, Maya now has a faster, up-to-date user experience with a shorter startup time and customisable preferences, splash screen improvements, and script editor updates that increase efficiency and with control. Python 3 is the new default programming language for Maya on Windows, Linux and Mac OS, although on Windows and Linux, Maya can still be started in Python 2 mode.

3ds Max workflows have been optimised with new texture baking, modelling and rendering capabilities. To protect scene integrity, new security improvements powered by the Scene Security Tools plugin include Malware Removal that automatically detects and eliminates malicious scripts from scene files and startup scripts. Scene Script Execution protects against malicious scripts embedded in 3ds Max scene files, regardless of whether the scripts use Maxscript, Python or .NET commands, by blocking the execution of unsafe commands. 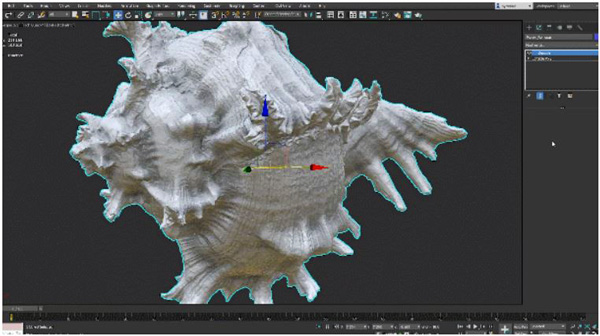 Efficiency upgrades for workflows are added to the most common modelling tools including Smart Extrude, Slice Modifier, Symmetry Modifier and AutoSmooth. A volume preserve option has been added to the modifier that performs additional calculations to reduce small detail and noise from models, while retaining the shape and definition of the overall mesh. Reducing this small, noisy data, for example from Scan and Sculpt data, with Relax can improve the processing time of the Autodesk Retopology Tools.

The Extrude modifier now contains significant performance improvements to the speed and interactivity of the initial extrude calculation, and to the responsiveness of the output when adjusting the amount parameter, allowing complex splines, which used to take minutes to process, to be operated on in a few seconds. 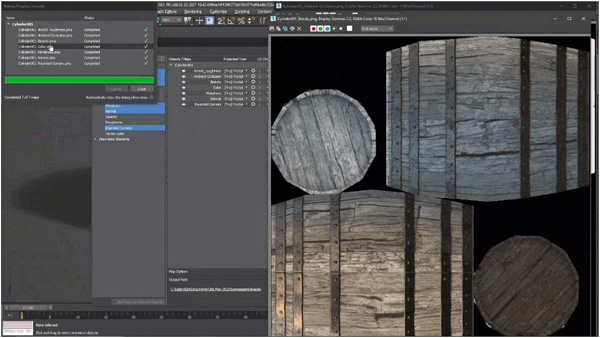 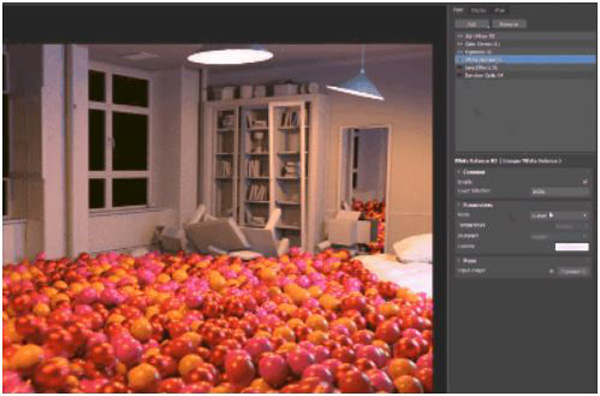 Imagers can now be applied, removed, re-ordered and edited directly in a dedicated tab of the Arnold RenderView for post-process rendering. A new Light Mixer imager makes it possible to interactively edit the contribution of each light group AOVs during and after rendering, without restarting the render. Bloom or ‘glow’, the Noice Denoiser and OptiX Denoiser are all available now as post-processing effects.

MotionBuilder now adopts Python 3 as the new default programming language on Windows and Linux. For developers, the MotionBuilder Python Command Line tool has been improved to allow new capabilities such as file processing and rendering from the Command Line. The MotionBuilder API has also been expanded making it easier to manage multiple script tabs in the Python Editor, and the startup experience can be customised to differentiate between different projects and tool versions. 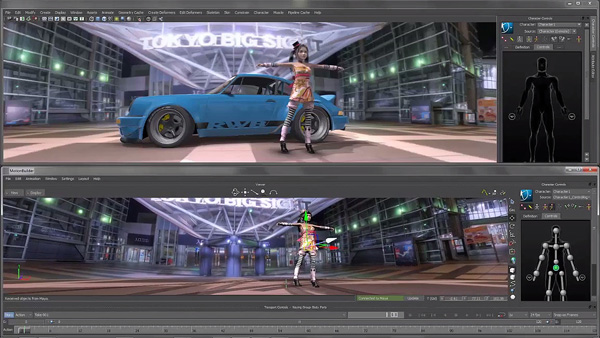 A number of updates improve the overall animation experience and reduce the number of steps animators need to take to reach the desired result. Among these updates is the ability to visualise real Quaternion Rotation properties within the FCurve Editor, a new Add to Body Part property that simplifies keyframing for character extensions, and updates in the Character Controls that save time by reducing the number of actions required to expand IK auxiliaries when selecting individual effectors.

Maya, 3ds Max and MotionBuilder 2022 are available as standalone subscriptions or with the Autodesk Media & Entertainment Collection.  www.autodesk.com