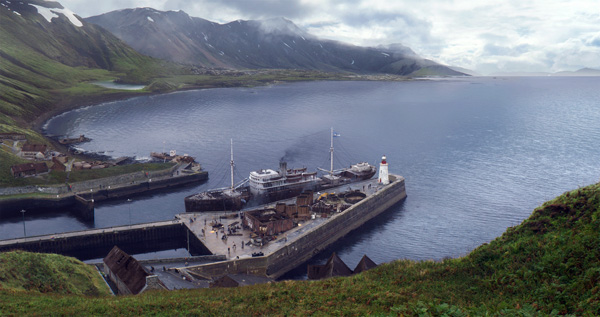 Tim Zaccheo, Richard Costin, Joe Cork and Max Wright set up Rumble VFX at the end of 2019.  Each had worked in the industry for about 20 years each, and felt ready for the challenge of setting up shop on their own. Located in Soho, Rumble creates VFX for film and television and handles production from early concepts and planning to shoot supervision and the design and completion of shots of all types and complexity.

The team’s four members’ skills, talent and experience are complimentary and strong in both 2D and 3D work. So far, their most recent projects include ‘The Crown’, Season 4, for which they contributed to a VES award winning episode, and completed 80 shots across the series. They have also delivered 100 shots for ‘Pennyworth’, Season 2.

Rumble VFX was barely a few months old when lockdowns were imposed in the UK.  Not surprisingly, their start-up plans were immediately halted, but the team were soon up and running remotely. Richard Costin said, “For our remote setup, we work directly on the workstations at the studio via client machines at each artist's house, which has kept the transition simple because all the networking, software licensing and so on are in place.

“The arrangement also helps turnaround times and security because we are all collaborating on the server internally, as normal, and not constantly transmitting files to other local machines.”

With plans underway to slowly start moving back to the studio, the team will operate with a mix of facility-based and remote working. Joe Cork said, ‘I’m sure we’re not alone in running a combination of work setups. It’s the best of both worlds, in fact. We all miss bouncing ideas off each other in person and it will be so good, both creatively and practically, to get back to real life reviews.”

The four founders have numerous BAFTA and Emmy nominations between them, and have worked on many award-winning productions over the years. Feeling that they are now at the top of their game creatively and technically, Tim Zaccheo remarked, “We wanted to do things our own way as a culmination of all our experience. That includes choosing projects that are right for us and working on our own R&D, with our own pipelines, as our way of responding to the expanding market.”

Max Wright said, “We have some interesting projects in the pipeline and are looking forward to Rumble being part of more high end TV and feature films. Year 2 for Rumble’s upcoming second year will be time to develop the business, and we are currently looking for bigger premises.”

Rumble VFX have also completed visual effects sequences for TV productions such as ‘A Christmas Carol’, ‘Gangs of London’, ‘Alien Worlds‘ and the Super Bowl release of the first trailer for the upcoming James Bond movie ‘No Time to Die’.  rumblevfx.com